Apple sued most in 2013, patent trolls to blame

When we discuss lawsuits in technology, the conversation tends to migrate toward Samsung and Apple. Though that’s a headline-making squabble, it’s not the only one Apple has been dealing with. According to a new report, Apple was sued more than any other tech company in 2013. Even more surprising is who’s in second place.

Apple dealt with 59 patent infringement suits in 2013, more than any other tech company around. A surprising second place went to Amazon, who were sued 50 times last year alone. AT&T checks in at third with 45 suits, and Google and Dell round out the top five with 39 and 38 defenses, respectively. 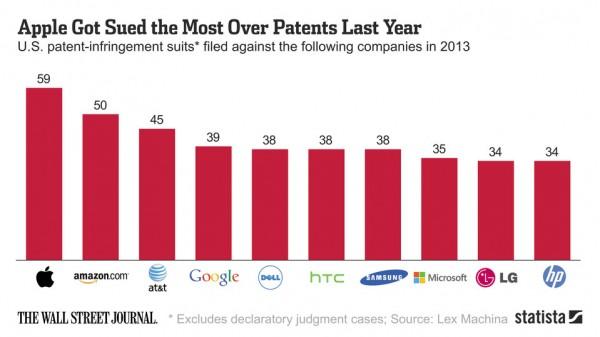 These are all trials in which the companies are defendants, not total trials. If you’re wondering who would be doing all this suing, it may make sense that they’d be suing each other, all these big tech companies. That’s clearly part of it, but a bulk of it comes from another unsurprising source.

Patent troll firms like Rockstar make up a bulk of these suits, according to Statista. The top ten filers of claims come from those types of entities, where the entire goal is to garner income from held patents. Those companies often do nothing other than litigate, which has been a point of contention when companies like Apple defend themselves in court.

Via: The Wall Street Journal