If you are a fan of the tiny little iPod nano or shuffle models you will like the panted app that has surfaced from Apple. The patent app shows a way to put a little speaker on the iPod nano clip so that the user can hear their tunes without having to resort to headphones. The illustration with the patent app, that was filed for last year, shows the speaker bump on the underside of the clip on the nano.

It looks like the clip on the iPods may need a bit of milling to create a recesses area of the speaker dome. The recessed are might also have an effect on the sound generated by the speaker. The app shows a design with one using a piezoelectric speaker that is coupled to the housing by wires and such that are flexible to allow the clip to move normally. 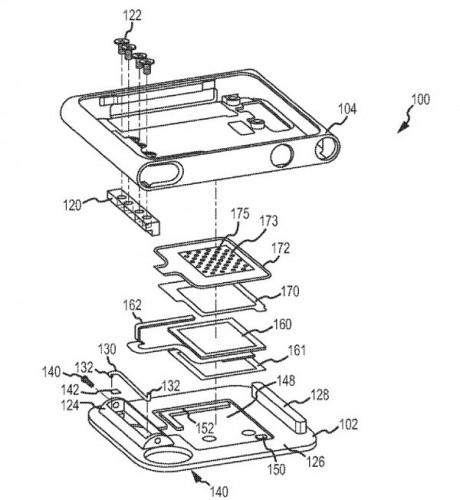 One of the segments of the patent app also takes about using a thin layer of a material known as Kapton Film. This film is stable over a wide temperature range and is interesting in that it was used as the outside layer of space suits in the Apollo days and as thermal insulation on the Lunar Module. There is no indication of when the speakers might show up on the smaller iPods at this point.