Apple Magic Keyboard for iPad Pro Review: Your fingers will thank you

It’s safe to say that I’ve waited 10 years for a proper iPad keyboard accessory from Apple. Was the wait for the Magic Keyboard for the iPad Pro worth it? Absolutely. It’s probably better to be late to the game but have a solid product, than to deliver something that’s mediocre – I’m looking at you, Folio Keyboard – though I can’t help but wish it hadn’t quite taken a whole decade to arrive.

This isn’t quite the review I’d hoped to do for the Magic Keyboard. The coronavirus lockdown means that travel is off the cards for the moment; I’ll return with a follow-up after I’ve had a chance to put it through its paces on a plane, where I suspect it’ll come to be a common sight. For now, I’ve been using the Magic Keyboard for the iPad Pro 12.9-inch at home, but already I’m impressed by just how good it feels to type on. Responsive and tactile, with a very satisfying thunk on every keystroke, it falls somewhere between Lenovo’s ThinkPad and Google’s Pixelbook ‘boards. They’re each very different, yes, but equally great to type on, and the Magic Keyboard lands somewhere in-between. 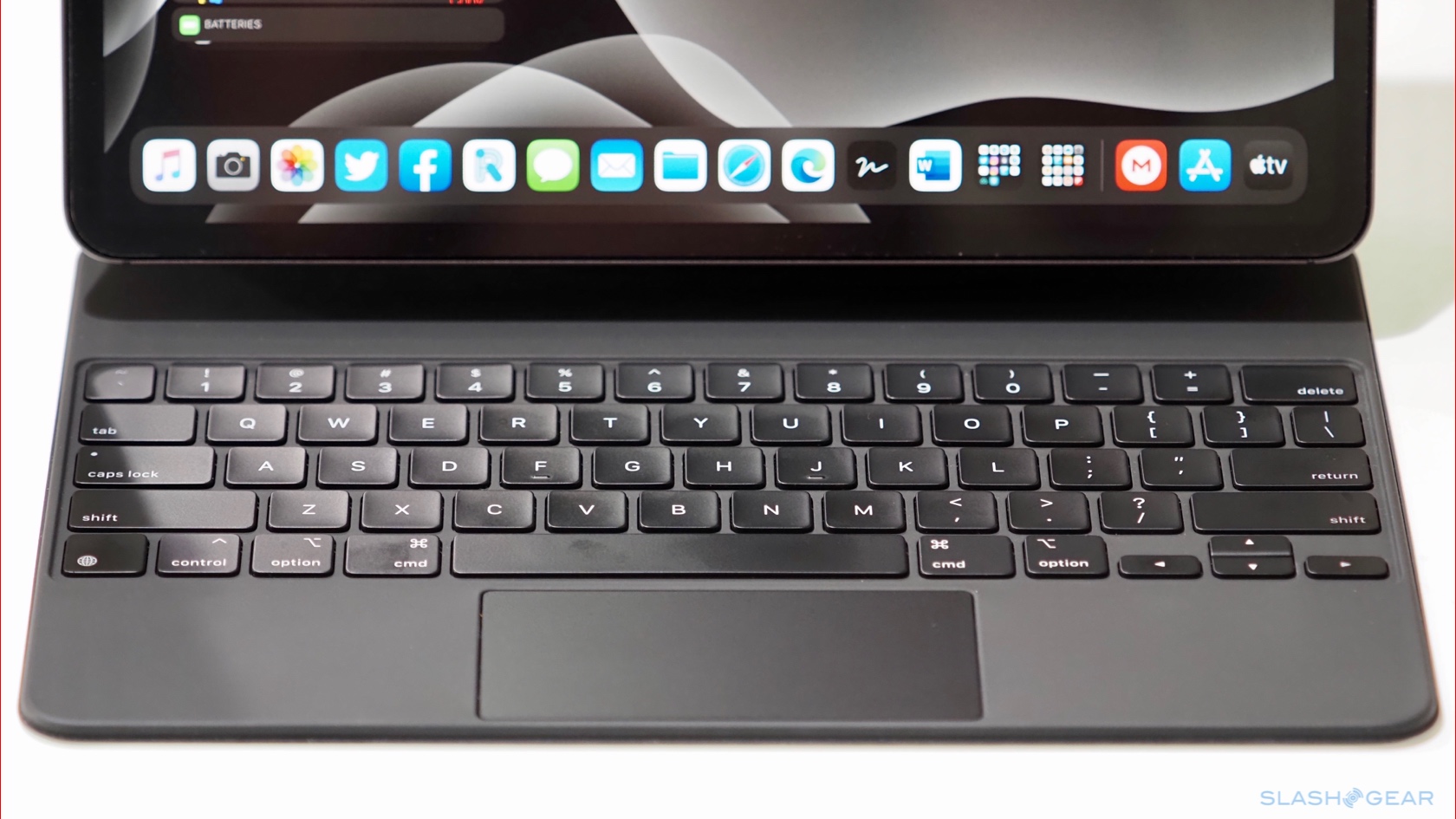 The 1mm key travel doesn’t sound like a lot on paper, but in the real world it feels just right. You’re not having to press down further than necessary, but nor does it feel like you’re typing on a piece of plastic – as you would on the Apple Folio keyboard.

The bigger issue I’m encountering, though, is that my fingers and the lower right edge of the iPad keep colliding. Every time I reach for the Delete key, or any of the keys in the top right quadrant of the keyboard, my middle and ring fingers invariably smack against the lower edge of the tablet. I suspect it’ll take my brain a few days to retrain itself to keep my fingers more “curled” as I type.

As for omitting the Function row of keys, well, I can see both sides of that argument. Certainly, I’m among those who miss the extra functionality and shortcuts those buttons offer. All the same, I do think the row would probably have ended up hidden too far underneath the lower edge of the iPad when it’s tilted. That’s just a side-effect of Apple’s cantilevered hinge design. 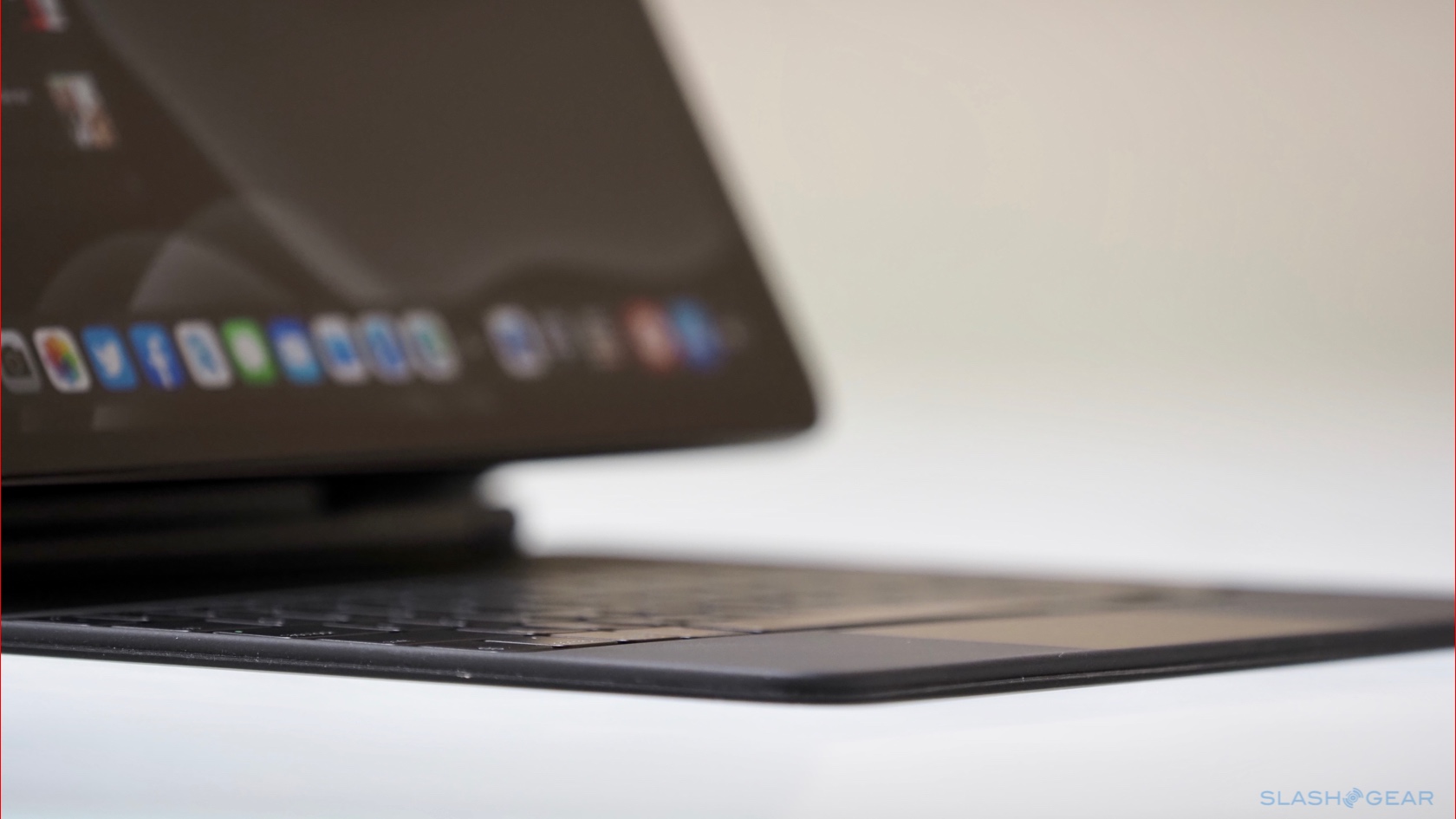 That bears some examination, too. From what I can tell, the constraint of the top hinge is actually the bottom portion of the keyboard itself. Were the iPad Pro to tilt back any more, you’d run into the same exact issue my fingers are having right now, which is banging on the lower part of the iPad.

Saying that, had Apple allowed the lower hinge to tilt back more, then the whole tablet could’ve shifted back by an inch or two, clearing up more space. Then again, doing that might create an issue with balance and stability. 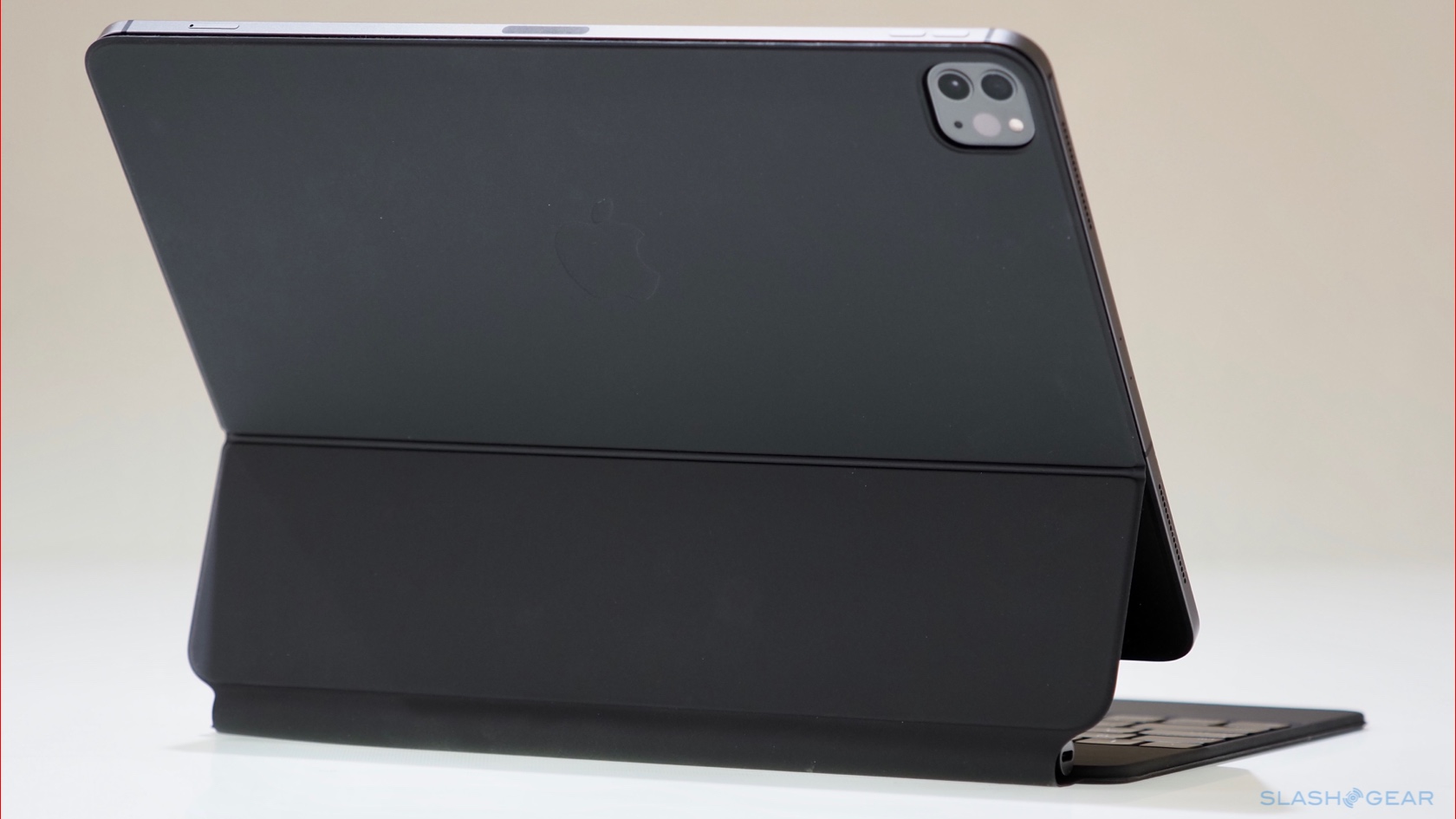 Ergonomics invariably come with compromises, and they’re very personal things. Still, this entire review is being typed on using the Magic Keyboard, both on my home office desk, at the kitchen table, on the couch, and elsewhere. I’m yet to come across a point where I feared the iPad might fall off, and I’ve been pleasantly surprised at how – with the base of the keyboard resting firmly on my thigh while I’m cross-legged – the whole assembly still feels sturdy and balanced. 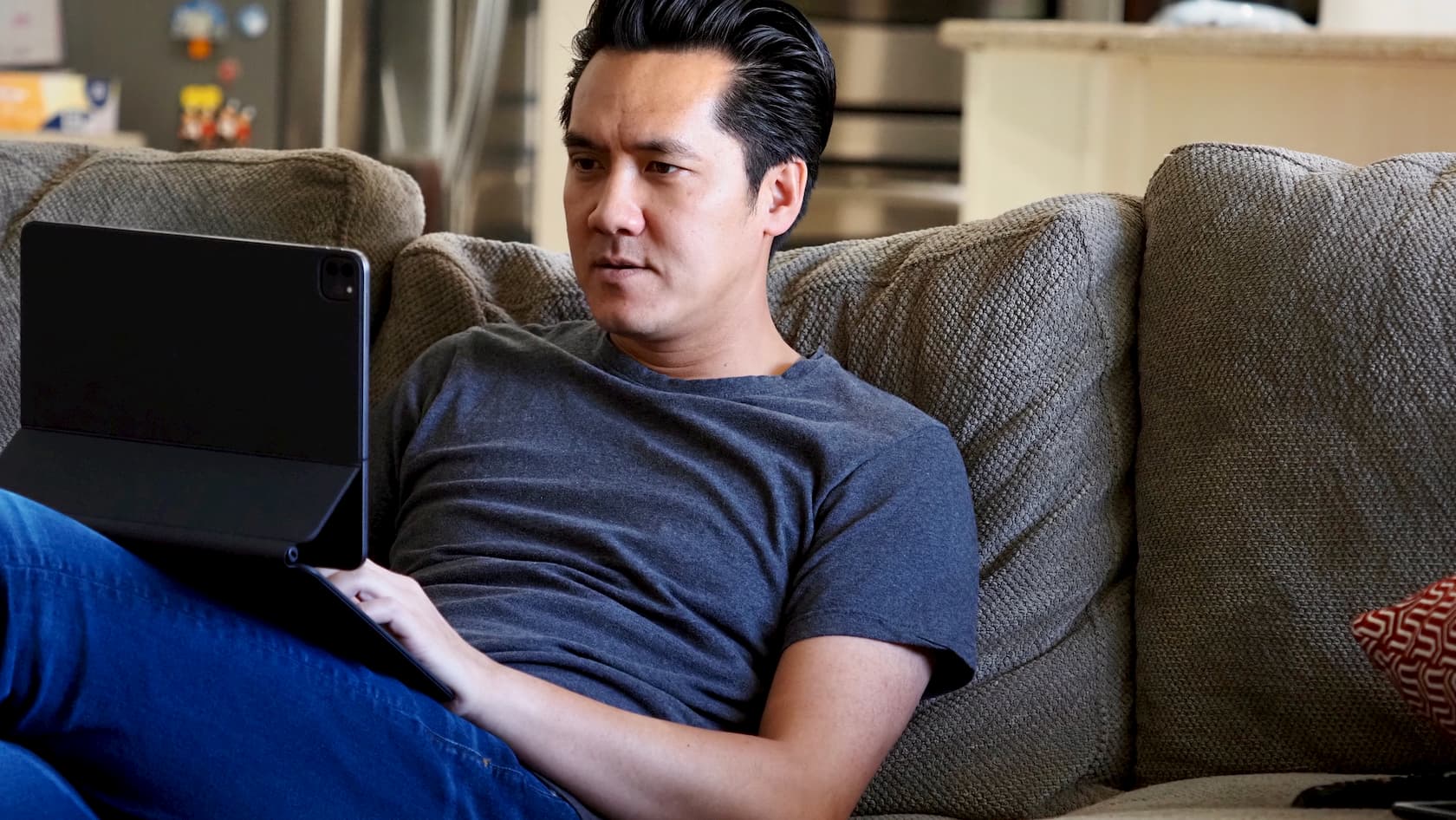 Having lived with the Brydge Pro+ keyboard for the iPad Pro for a while, I found that I tended to use the iPad less as a tablet: it just took that little bit too much effort to detach it or put it back in. Apple’s magnets may not be quite as confidence-inspiring as the Brydge’s tenacious hinges, but the design of the Magic Keyboard makes it far more elegant to pull the iPad Pro away and then return it when necessary.

There’s no doubt that the trackpad is the main highlight of the Magic Keyboard, which seems counter-intuitive given the display offers the same multi-touch gestures and more. Then again, the trackpad solves the annoying issue of having to raise your hand to poke and swipe, and it reduces the number of fingerprint smudges. The old argument of whether a touchscreen notebook is more or less ergonomic to use continues, undaunted by either time or opinions, but there’s no denying that most of us are used to the keyboard and trackpad layout of a traditional laptop. 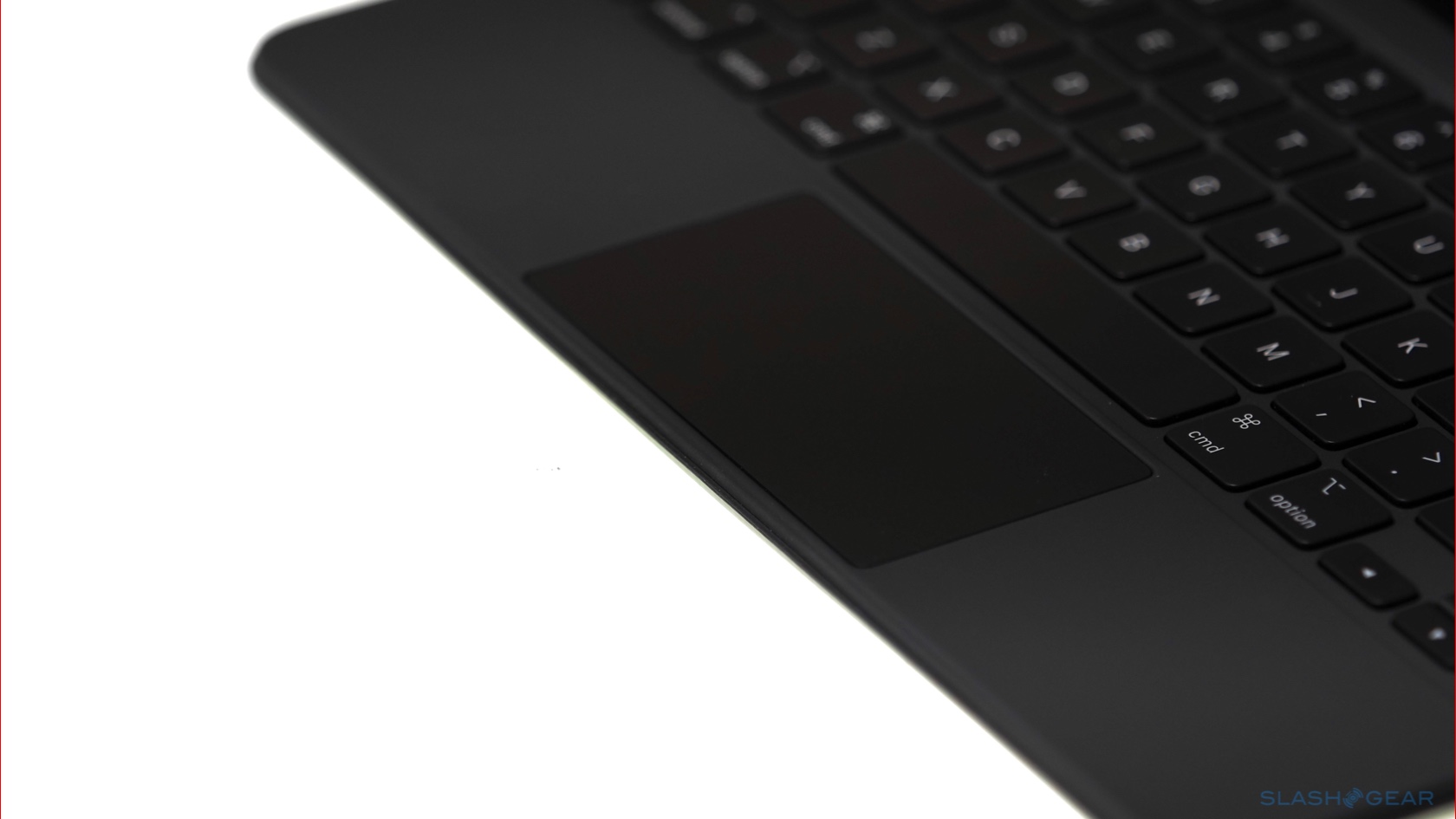 One, two, and three-finger gestures all work well, as does using one finger to tap, swipe, scroll, move the cursor, and click. I definitely missed having pinch-zoom in Word documents and Safari on Brydge’s keyboard. Meanwhile the three-finger gesture, to summon the application carousel or swipe back and forth between apps, is both convenient on the Magic Keyboard and frustratingly absent on third-party trackpads. 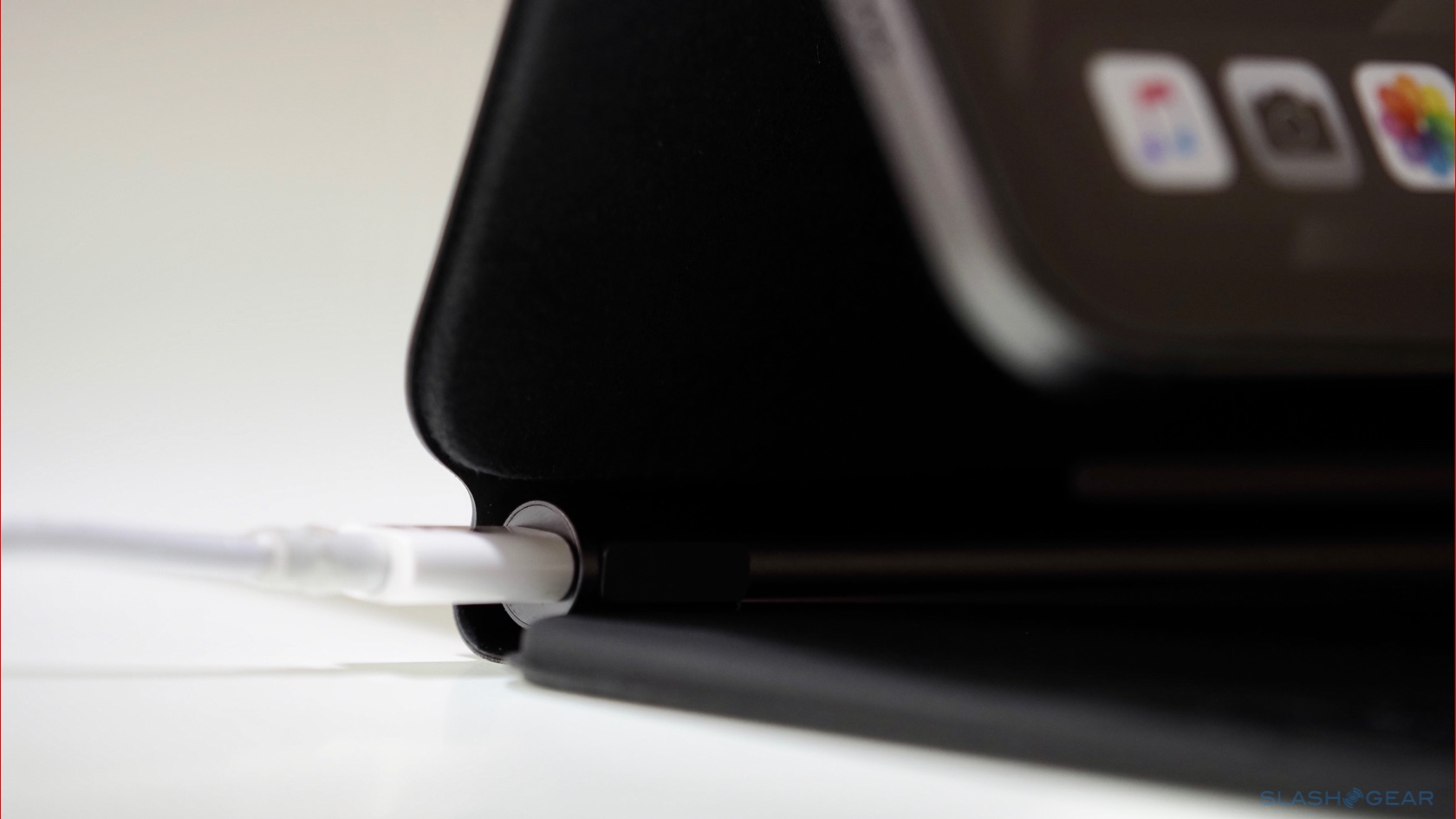 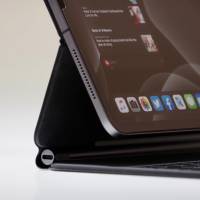 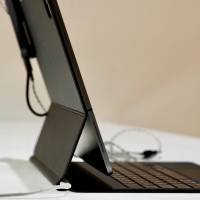 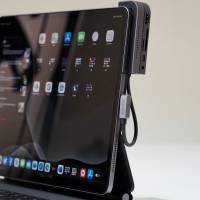 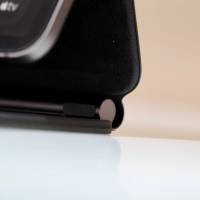 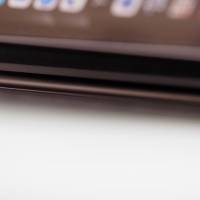 There’s a USB-C port integrated into the bottom left-hand side of the hinge that’s reserved for charging; it doesn’t support any accessories. Speaking of the hinge, when the keyboard is closed, it’s closed tight. There’s no chance of it accidentally opening while in transit, though that also means it’s near-impossible to open using just one hand.

Really, there’s just no quick and easy way to open this thing up. The fastest method I’ve found is to lift it up on the front edge, place four fingers under the keyboard, grab hold of the bottom lip with the thumb, and then pry it open. We’ll have to see how well those two hinges hold up over the next two or three years of constantly being opened and closed.

The devil is in the details, so they say, and that’s somewhere Apple often excels. I like how the Magic Keyboard protects both the display and the full back of the iPad Pro while it’s in your bag, and the backlit keys look great during the day and even better at night. There’s very little light bleeding from underneath, too, unlike what I found with the Brydge Pro+ keyboard. The top of the trackpad is smooth and it’s clickable throughout the entire surface, again unlike the Pro+’s trackpad. 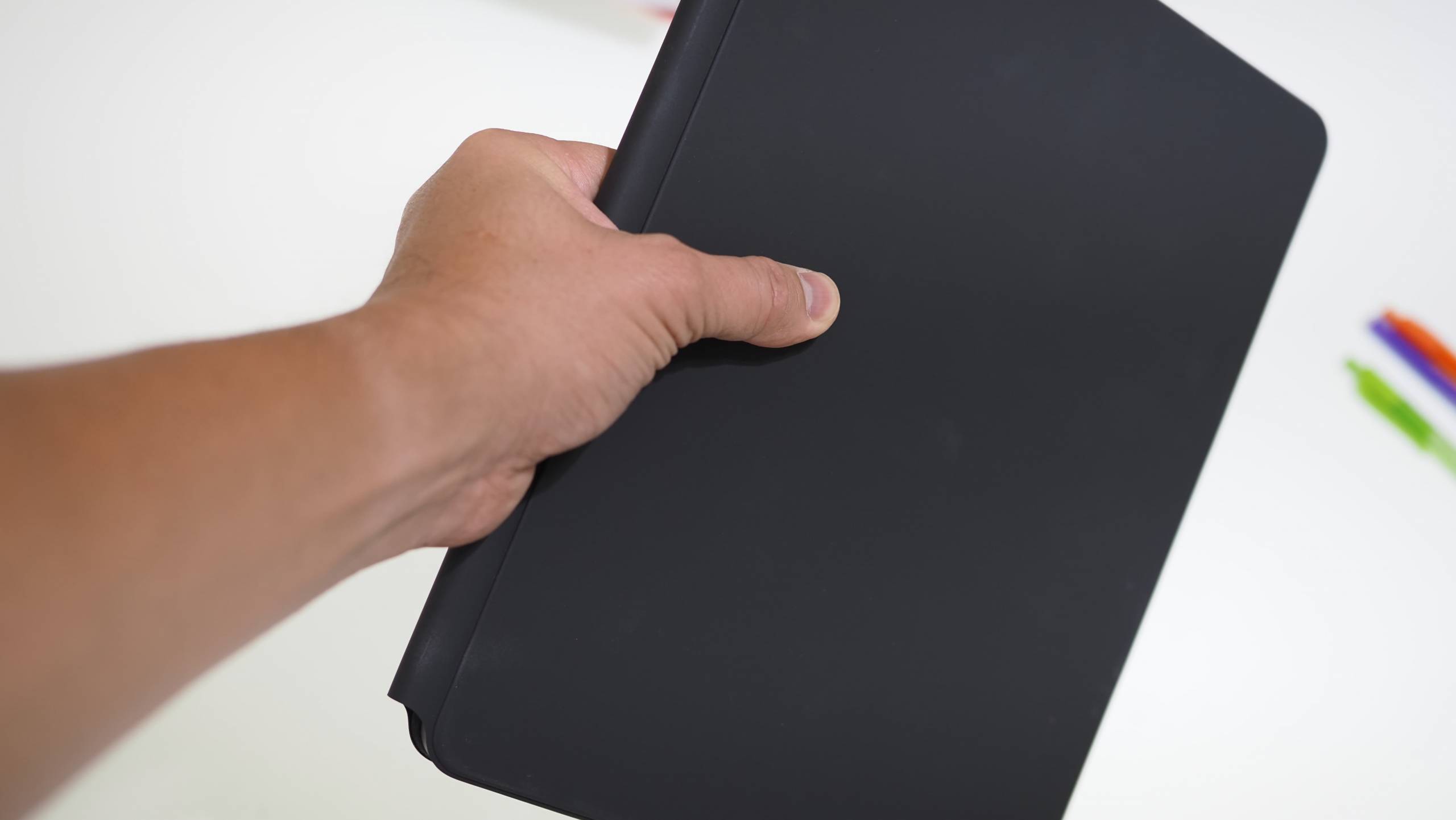 Let’s not pretend, though, that at $299 or $349 for the 11- or 12.9-inch Magic Keyboard respectively that this isn’t an expensive accessory. There will undoubtedly be cheaper third-party options for those who find Apple’s keyboard too rich for their tastes. Still, if you’re one of the lucky ones that can afford such luxury, it’s hard not to be wooed by the Magic Keyboard’s clever design, tactile keys, and full-featured trackpad. 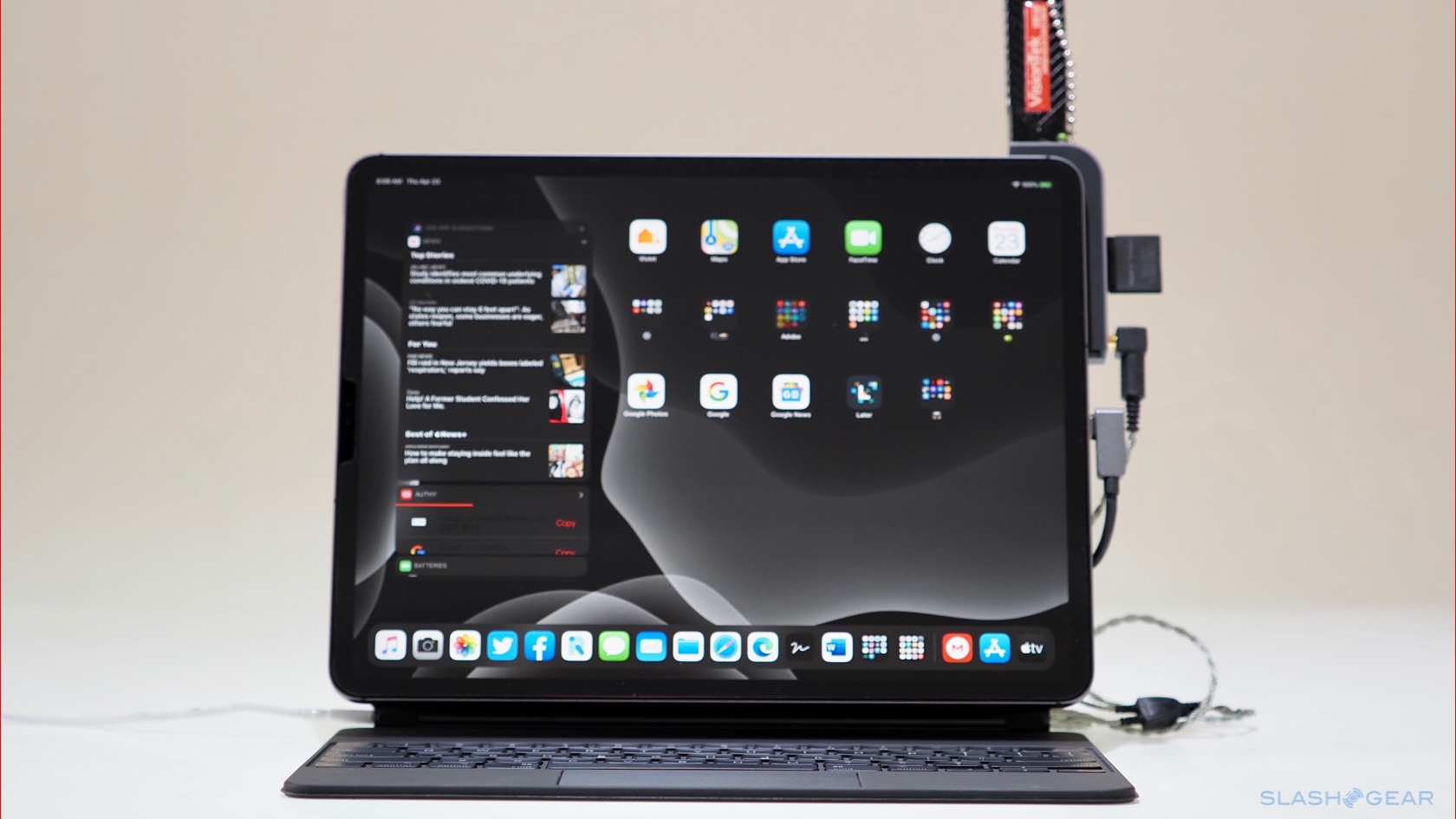 All in all, my conclusion for the Brydge Pro+ keyboard remains unchanged: it’s still the best third-party keyboard accessory that doesn’t have an Apple logo on it. The Apple Magic Keyboard, though, is hands-down the best keyboard and trackpad experience money can buy for the iPad Pro. If you still have room in the budget after buying the 2020 iPad Pro itself, your fingers will thank you. 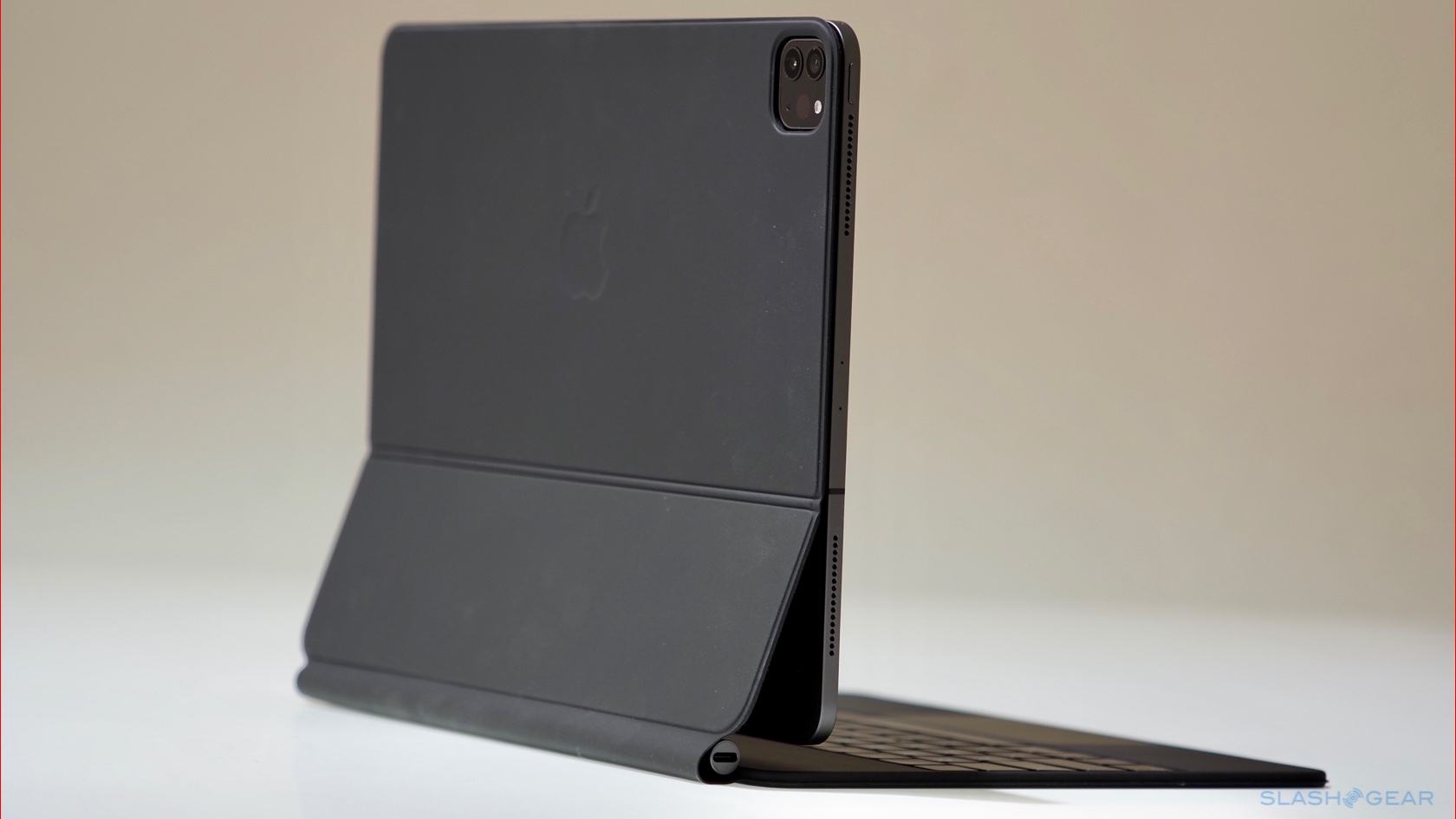 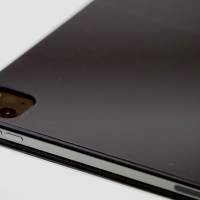 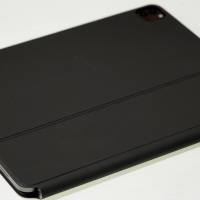 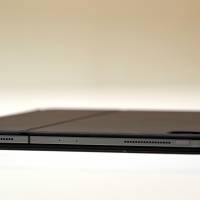