Apollo 11 flag and other space artifacts head to auction

Fans of space travel have some new artifacts that are heading to auction soon to swoon over. One of the most interesting artifacts that will be sold is an American flag that orbited the Moon aboard Apollo 11. The flag was signed by Apollo 11 Command Module pilot Michael Collins. The flag appears to be mounted on a piece of paper that is itself signed by Collins.

Collins’ signature also appears on the flag along with the date, “July 1969” and an inscription that reads, “Carried to the Moon on Apollo XI.” The flag will be sold by RR Auction and is expected to bring around $60,000. The auction ends at 7:00 p.m. ET Thursday.

Along with the flag, the same auction house is also selling an Apollo 11 flight plan page that was flown into orbit on the Columbia Command Module. The page has an Apollo 11 burn chart and was signed and certified by Collins and fellow astronaut Buzz Aldrin. That page is expected to bring $20,000 at auction.

Another interesting auction item is a 70mm positive film from Apollo 11’s Hasselblad camera. The film contained 126 of the most iconic images that were captured on the surface of the Moon in the historic Apollo 11 Moon landing by Neil Armstrong. The film was acquired from Terry Slezak, a member of the decontamination team at the lunar receiving lab. 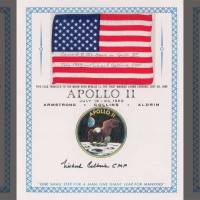 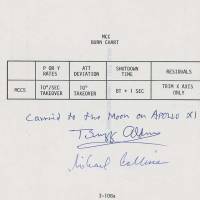 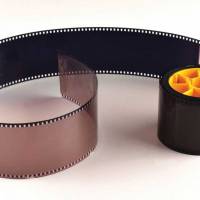 Slezak was in charge of processing the film that the astronauts returned from the Apollo moon landing. The film is wound on a yellow Kodak film holder and has an auction estimate of $8,000. Apollo 11 artifacts are in demand with July 20, 2019, marking the 50th anniversary of the Moon landings. Apollo 11 carried three astronauts to the Moon, including Neil Armstrong, Michael Collins, and Buzz Aldrin.