What would you do if your $6 mobile app gets pirated a lot? And by a lot, we mean 85 percent of the installed user base? Some might have called it quits and yanked off their app. Others might have tried to enforce even stricter piracy countermeasures. But not Android app developer Jack Underwood, whose popular Today Calendar app is experiencing those numbers. Instead, he is “punishing” pirates by making them walk the plank into shark-infested waters. Well, not really. He’s just filling up their calendars with a lot of pirate-themed events.

Piracy has been a problem of the software industry since God knows when and while some progress has been made on some fronts, the mobile app business has introduced new challenges. This is especially true on Android were app packages can sometimes be so easily distributed outside official channels. Underwood says that he understands the motives for piracy and, surprisingly, isn’t totally against it. The app might not be available in certain markets or some users might feel that the price tag, which is $6 for Today Calendar, is too high a price.

Even more surprising, however, is his views of anti-piracy measures. Unlike perhaps majority of the people in the industry who are still clinging to things like Digital Rights (some would say Restrictions) Management or DRM, Underwood thinks that those are just a waste of time and resources. No matter how smart or complicated your DRM is, someone somewhere will always find a way to crack it open. He’d rather spend his time improving his app than frantically putting out fires caused by pirates.

That’s not to say Underwood is taking things sitting down. Pirates still must be punished, but he isn’t about to let his innocent paying customers get caught in the crossfire. So instead of implementing anti-piracy measures, he is putting in piracy punishment features. Today Calendar will randomly add pirate-themed events to the user’s calendar if it determines that it is a pirated copy. The “punishment” won’t happen instantly but when they start, they will hit hard. Underwood thinks that if users get fed up, they might end up buying the app if they really like it. If they drop the app, however, Underwood won’t be losing paying customers anyway. 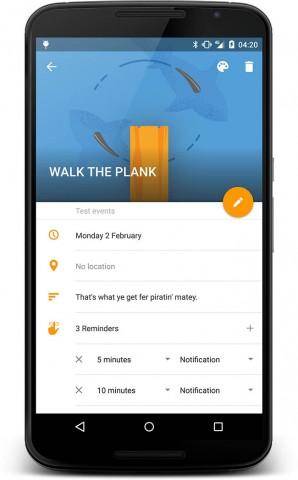 Underwood isn’t the first or only developer to resort to more creative ways to make a point about piracy. Last year, Game Dev Tycoon developers Greenheart Games inserted a “feature” in a cracked version of the game, which they distributed themselves, that would make players run into the effects of piracy, which is going bankrupt and ending the game. Ironically, it caused pirates to start complaining about how in-game pirates ruining their in-game business. These are rather crafty ways to get the point across while not punishing legitimate owners like what many DRM implementations do.