One of the most famous ancient cities in all of Italy is the ill-fated city of Pompeii. The city and its residents were covered in hot ash and pumice stone after an eruption of Mount Vesuvius in 79 A.D. In modern times, the city of Pompeii is undergoing excavation as parts of the city are dug from underneath the ash and pumice to reveal remarkably well-preserved homes and businesses complete with beautiful frescoes.

Recently, archaeologists working in the city uncovered a hot food and drink shop that they say served the ancient equivalent of street food to Roman citizens. The shop was known as a termopolium, which is Latin for hot drinks counter. The shop is located in the archaeological parks Regio V site, which isn’t open to the public and was first revealed on Saturday.

When the shop was unearthed, traces of nearly 2000-year-old food were still in some of the deep terra cotta jars that contained hot food that the shop owner would lower into circular holes in the counter. The most striking part of the discovery is that the counter’s front still has its brightly painted frescoes with some images depicting ingredients in the food sold like chicken, snails, and ducks hanging upside down.

Archaeologists found traces of pork, fish, snails, and beef in the containers in the counter. Interestingly, one of the pictures appears to show a dog. We like to think the ancient Romans weren’t eating dog, but it’s unclear. Perhaps that image represents scraps that could be purchased to feed dogs. 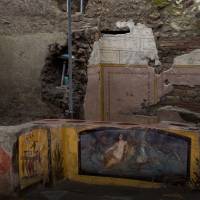 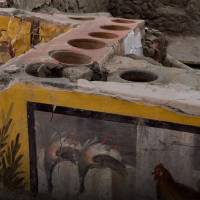 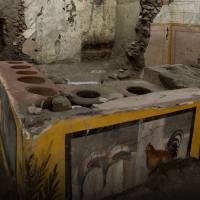 Pompeii is about 14 miles southeast of Naples, Italy, and was home to about 13,000 people when it was buried under ash and pumice. The eruption of Mount Vesuvius released forces equivalent to multiple atomic bombs.