While Intel and AMD trade blows often when it comes to desktop PCs, it seems that Intel has a lock when it comes to notebooks. AMD is looking to change that today with introduction of two new Ryzen mobile processors made specifically for notebooks. The processors being announced today were previously codenamed “Raven Ridge” APUs (Advanced Processing Unit), a name enthusiasts have been following for a couple of months now.

This new line of processors features two APUs: the Ryzen 7 2700U and the Ryzen 5 2500U. They combine Ryzen’s Zen x86 cores and Radeon Vega graphics together in their SoC design, making them a better choice for portability than standalone CPUs and discrete graphics. In its announcement today, AMD focuses most on the Ryzen 7 2700U, saying that it offers enough power to run games like League of Legends, Overwatch, CS:GO, and DOTA 2 at 1080p with “smooth and playable framerates.”

What that ultimately means is something that will have to wait for hands-on testing, but it suggests frame rates of at least 30 frames per second for Overwatch, which is the most demanding of those four titles. In other games like League of Legends and DOTA 2, it wouldn’t be surprising to see frame rates hit 60 fps, but again, that’s something for hands-on tests to determine. 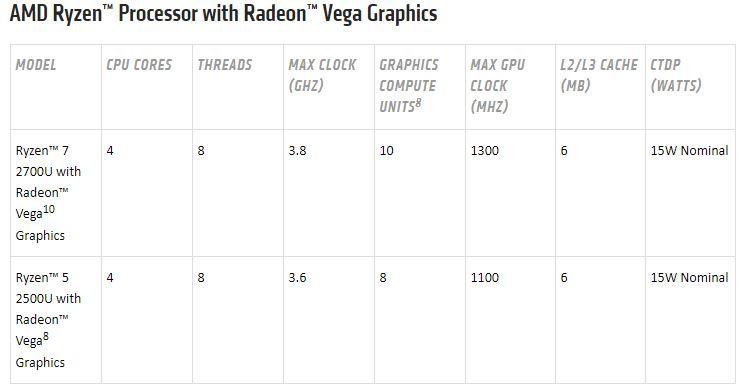 In any case, the 2700U comes packing four Zen cores with 8 threads and a max clock speed of 3.8Ghz. We see the exact same core and thread count in the Ryzen 5 2500U, only with a max clock speed of 3.6GHz instead of 3.8. While the 2700U offers 10 Vega graphics compute units, the 2500U is limited to 8, though specifications are similar elsewhere. Both also boast a 15W nominal CTDP, and compared to previous AMD mobile processors, AMD is promising up to 3 times the CPU performance and up to 58% less power consumption.

As previously suggested, we’ll have to wait and see how these Ryzen processors stack up to the competition in side-by-side benchmarks, but for now, they sound like pretty solid pieces of hardware. In the next few weeks, we’ll see them launch in notebooks from Acer, HP, and Lenovo. Support will then spread to Dell and other OEMs sometime in early 2018.