Another Amazon patent related to drone deliveries has surfaced, this one describing possible methods the company’s future delivery drones may utilize to get packages to customers. One big question regarding drone deliveries is how, exactly, the package will go from the drone in the sky to the person on the ground. The patent details one method — a package label that is also a parachute, deploying when the package is dropped to lower it safely to the ground.

The patent, which was filed with the US Patent and Trademark Office and is dated May 30, details ‘systems and methods for delivering packages via aerial vehicles.’ These aerial vehicles are drones, of course, as shown in the illustrations. The drones featured in the patent images appear to be typical heavy-duty quad-copter designs with legs for landing and armatures for holding onto packages. 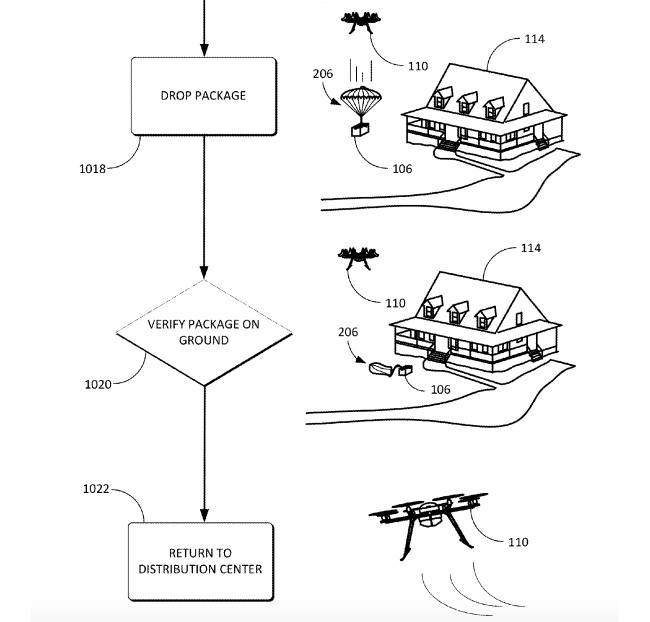 Though the patent doesn’t detail the method Amazon will use for these deliveries, it does present possibilities, with one being a ‘label that includes a parachute to enable the packages to be dropped’ from the drone. The label would have a self-adhesive backing, the patent goes on to explain, as well as the parachute itself, the cords tying the two together, and a breakaway cover.

The effect on the package itself could be minimized via the inclusion of a shock absorber, and the drone itself would be equipped with sensors that enable it to verify that the package was properly delivered. More than one parachute would be necessary depending on the package’s shape, per the patent images, and labels with various sized parachutes may also be created to accommodate different box weights.

As with all patents, it is possible we’ll never see this technology make its way into an actual product.