Amazon has introduced a new feature for Prime members that allows shoppers to share images of themselves wearing different outfits. The tool will send those images to a specialist who will, a minute or so later, return a suggestion about which outfit to purchase, doing so based on which one looks best, fits best, and more. The service is intended to be used as you’re shopping, and gives users the ability to delete the photos after getting a response.

If you’re an Amazon Prime subscriber, open the company’s mobile shopping app and look for ‘Outfit Compare’ under the side menu’s ‘Programs and Features’ listing. You should see the tool there (if you’re using iOS, otherwise you’ll have to wait), and with it you can upload two images of yourself wearing two different outfits. 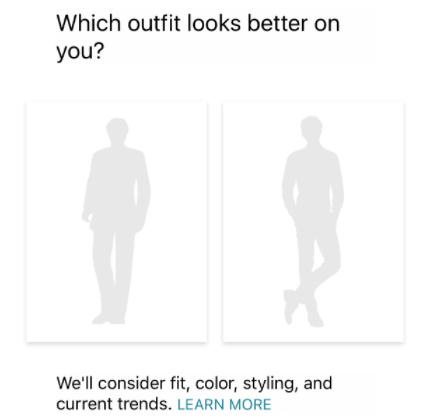 These images, presumably, will be snapped in a store’s dressing room before you buy the items, with the intention being to get advice about which of the two outfits looks best on you. A machine won’t be making that assessment, but rather an actual living human said to have some type of fashion expertise.

Only the stylists have access to the photos, which the user can delete from both their end and Amazon’s end whenever they’d like. Getting a result is said to be very rapid, less than a minute in some cases. It’s not a mere yay-or-nay selection, though, with the app returning a sliding scale of sorts showing how much the chosen outfit is liked: it ranges from ‘it was a close call’ up to ‘definitely pick this one!’