Amazon’s Kindle DX was announced back at the beginning of May, but it’s taken until now for the first of the oversized ebook readers to reach buyers’ hands.  The Kindle DX begins shipping this week, promising more E Ink real estate, more memory, and more file-type support on top of the Kindle 2’s existing Whispernet wireless and other features.  Is bigger necessarily better?  SlashGear put on our reading glasses and set to finding out.

The differences between the Kindle 2 and the new Kindle DX are obvious: a 9.7-inch E Ink monochrome display dominates the front panel, offering around 2.5x the space of the smaller ebook reader and squashing the QWERTY keyboard into tic-tac tininess at the bottom.  Amazon has obviously worked hard to minimize the screen’s impact on the overall chassis, with mixed results.  It’s a scant 0.02-inches thicker than the Kindle 2, at 0.38-inches, with a metal back-plate lending stiffness, but the left-side page controls have been dropped.

Make sure to click through for the full review, photo gallery and unboxing/walkthrough video of the Amazon Kindle DX.

That means that anybody who automatically goes to use their left-hand to turn pages (and that’s not just the left-handed among us) will have to either retrain themselves or follow Amazon’s advice and flip the display 180-degrees.  Doing so obviously puts the keyboard and joystick out of easy reach, so it’s not an ideal solution.

Amazon expect the extra screen inches to be most valued by students reading electronic versions of textbooks, those wishing to migrate to non-printed magazines and newspapers, and business-people keen to tote masses of documentation without impact on their briefcase.  Two elements step into play here: firstly, the Kindle DX gets native PDF support, for Adobe’s ubiquitous file-format, and secondly Amazon has added automatic screen rotation, which will flip the display between portrait and landscape.

PDF support is a nice addition, and we’ve had no problems loading files onto the Kindle DX either via the wireless Whispernet service (where you email the PDF – or indeed a variety of file formats, including HTML, DOC, RTF, JPEG, GIF, PNG and BMP – to your DX’s unique email address, and it’s converted en-route) or via a USB connection to PC or Mac.  There’s 3.3GB of user-accessible space, more than twice what the Kindle 2 offers.

Anybody planning on doing this regularly really should get into the habit of using the included USB 2.0 to micro-USB cable, though, as Amazon’s Whispernet conversion fees can quickly mount up.  Shortly before they announced the DX, Amazon quietly changed their policy on wireless conversions: where previously they charged a fixed $0.10 per document, they now bill per megabyte.  Files are rounded up to the nearest whole megabyte (MB), each charged at $0.15.  Given that a typical research paper will range in size from under 1MB (which Amazon will round up) to perhaps 10-15MB depending on length, graphics and whether the original is in color or monochrome, you’re likely looking at least a dollar per conversion.  Manual transfers via the USB cable (Amazon will also convert documents not natively supported and send them back to your email account) are free.

Once on-screen, PDFs generally render well.  The Kindle DX doesn’t support PDF zooming, so if text is too small you either rotate to landscape (which gains horizontal width at the expense of length) or squint.  Here’s another reason why it’s wise to convert and transfer manually: Amazon don’t give refunds if your wirelessly delivered document proves unreadable.

All other documents, whether magazines, newspapers or books, are presented as on the Kindle 2.  That is to say, they show cleanly and crisply, thanks to the highly readable E Ink display, and page-turns, though a little slower than the smaller model, grow less distracting the more you read.  Ebook deliveries via the integrated 3G connection (which relies on Sprint’s EVDO Rev.A network) are fast and simple, and there’s certainly no shortage of choice through Amazon’s online store.  The much-vaunted textbooks are yet to appear, however, so we’ve been limited to testing the Kindle DX with standard ebooks and our own files.

Some of the DX’s more interesting features, Amazon lump under the “Experimental” heading.  Text-to-Speech incurred the wrath of the Authors’ Guild, and now there’s a clear “unless the book’s rights holder made the feature unavailable” high up on the product page, but we really can’t see anybody offloading their parenting duties to the Kindle DX and expecting it to read their kids a bedtime story.  It seems more gimmicky than anything else, and AudioBooks are certainly not at threat.  Amazon also throw in an MP3 player, which is rudimentary in its features but, as long as you’re satisfied with merely MP3 support, does all you ask of it, including background playback either via headphones (there’s a standard 3.5mm socket) or the integrated stereo speakers.  Finally, a very basic web-browser offers rudimentary online access over the 3G connection, good enough for the occasional Google query but unlikely to displace your netbook. 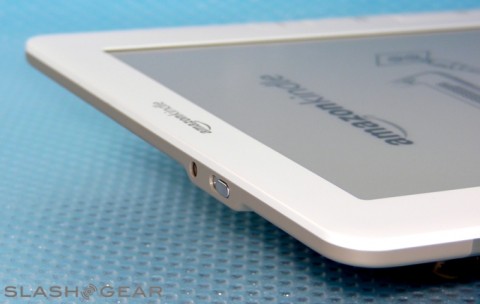 As for frustrations, there are a few.  The automatic page rotation is efficient at spotting an angle change, but we’d like a button or switch to easily toggle it on or off.  Reading when sat upright at a desk may be how students and business people consume their text, but most other people like to read lying down, slumped on the sofa or at any number of angles, all situations in which an automatic page turn is an unwanted annoyance.  The option to turn it off is in the Kindle DX’s settings page, but it’s a few too many steps away to be habitual; a “lock orientation” toggle would make it easier, especially given the few seconds required for the E Ink to rotate.

The missing left-hand buttons are the next main flaw, and in fact the tools on the Kindle DX generally fall short of what the average student or worker might expect to use when reviewing documents.  As with the Kindle 2 you can add text comments and clip sections of an ebook, but there’s no circling, in-line amendments, underlining or any of the common highlighting many people do with their textbooks.  We’re left looking enviously at the touchscreen controls on the unreleased Plastic Logic Reader.

The final – and undoubtedly biggest – frustration, though, is price.  At $489 it’s just too expensive for our liking.  That buys a lot of textbooks (we’re yet to see how much individual electronic textbooks get priced at, too) and puts it out of the reach of many student budgets; it also seems at least $100 too much for mainstream newspaper and magazine readers.  Now E Ink panels aren’t cheap, that’s true, but Amazon’s ebook ecosystem, with the Kindle DX tied so closely into their own retail store, does mean that it’s Amazon’s own door that most people will be knocking on for Kindle content.

Objectively, the Kindle DX is a great piece of hardware.  If the few ergonomic issues – absent left-hand buttons being the most significant – don’t affect you, then working with such a broad expanse of E Ink display is great.  Problem is, most general readers will be quite content with the 6-inches offered by the cheaper Kindle 2, and from the subset of users left over many will balk at the DX’s price.  If Amazon can negotiate strong enough deals with publishers to offer significantly discounted electronic versions of textbooks and technical documents then the initial outlay may seem more realistic; until then, the company has priced the Kindle DX into an even smaller niche.