It’s been an exciting couple of days for Amazon. Yesterday, the company announced a slew of new devices, ranging from the Kindle Paperwhite to the Kindle Fire HD (in all of its various forms), along with refreshes of the original Kindle and Kindle Fire. Today, Amazon has released a new update for its Silk browser in anticipation of the launch of the Kindle Fire HD, and it adds quite a few improvements over the Silk that most people are familiar with.

Amazon announced the update on the Silk blog, in the first post to the blog since Silk was announced last year. One of the most noteworthy features is the addition of a “Trending Now” section, which “alerts our customers to pages that have experienced an unusual increase in their level of traffic.” The idea behind it is, obviously, that webpages which have experienced an increase in traffic are probably worth checking out. Another new feature is the “Selected Sites” section, which is a selection of recommended sites you might find interesting based on your browsing history.

Of course, in order to offer these new features, Amazon needs to track your browsing behavior, which is something that a number of users will likely have a problem with. While it may sound a little scary, TechCrunch points out that Amazon isn’t collecting any personally identifiable information with these features, so at least there’s that. This update is much more than the Trending Now and Selected Sites features though, as Amazon also says that Silk is a bit faster after this update. In the company’s benchmark tests, the new Silk showed a “30% reduction in page load latency,” over the original browser, which definitely isn’t a bad thing. 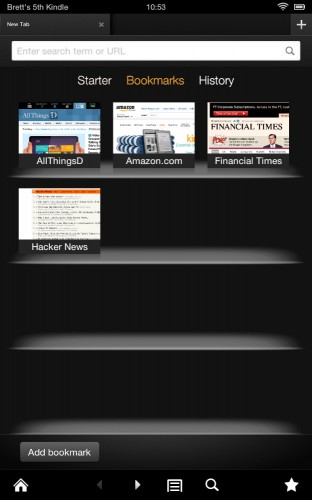 Also included in this update is improved HTML5 functionality, with Amazon saying that after this update, Silk is able to boast twice the HTML5 compatibility. The key HTML5 talking points with this update include improvements to form and element support, geolocation, and IndexedDB. Finally, Amazon has also overhauled the start page with this update, which separates your bookmarks from your most visited sites, and makes it easier to browse both.

All in all, it doesn’t sound like too bad of an update, so long as you don’t mind some of these new features that require tracking. Collecting browsing history and using it to make suggestions is nothing new though, so some probably won’t view it as a big deal. What do you think of Amazon’s latest update to Silk?