In what seems like some sensible business strategics, the New York Times has just reported that Amazon has acquired Toucho, a New-York University based startup specializing in touchscreen technology. Amazon is said to merge Toucho’s technology as well as staff into its Kindle division, based in Cupertino, CA (guessing Amazon thinks Silicon Valley doesn’t have much to offer in the way of touch tech at the moment).

Touchco uses a technology called interpolating force-sensitive resistance, which it puts into displays that can be completely transparent and could cost as little as $10 a square foot. The capacitive touch screens used in the iPad and iPhone are considerably more expensive. Unlike those screens, the Touchco screens can also detect an unlimited number of simultaneous touch points.

Touchco’s technology uses resistors that are sensitive to different levels of pressure. It has said its screens can distinguish between the touch of a finger and the pressure of a pen or similar pointing device. The company had designed its technology to work well with full-color LCD screens, similar to those used in the iPad and Hewlett-Packard’s coming line of tablet PCs. The technology could allow Amazon to introduce a full-color touch-screen Kindle, raising the question of whether the device’s current displays, which are made by a company called E Ink will play a role in the next round of reading devices.

We’ve noticed that Touchco’s website has been stripped bare, leaving only a note that says “Thank you for your interest in Touchco. As of January 2010, the company is no longer doing business.” Seems like Amazon’s finally realizing that they’re not the only ones making a touchscreen e-reader device. 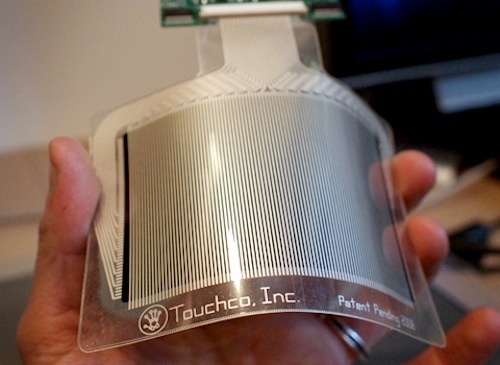