As much as smartphone and tablets let us do things with a swipe or a tap, we inevitably find ourselves with the need to hammer away with a keyboard. Unfortunately, that usually means either dishing it out on a virtual keyboard, or carrying around a portable, or sometimes non-portable, physical keyboard. But if Air Type ever becomes a real product, all you will really need are two cuffs and a bit of typing skill.

Air Type is pretty much just a concept right now, so explaining how it really works is pretty much out of the question. The closest thing you’ll be able to associate with it is an air guitar, which doesn’t exactly lend this project much credibility. But the list of mentors might, which includes engineering luminary Bob Metcalfe.

Air Type aims to rid yourself of any keyboard, be it a real one or a virtual one. The only keyboard that will exist will be the one in your head, or the one that the system thinks you’re typing on. The cuffs fit under your palms and theoretically it monitors the movements of the fingers to determine what letter is being typed. How it does that, however, the team isn’t exactly saying. It will most likely connect to devices via Bluetooth, which is probably the only definite thing we can say about this concept. 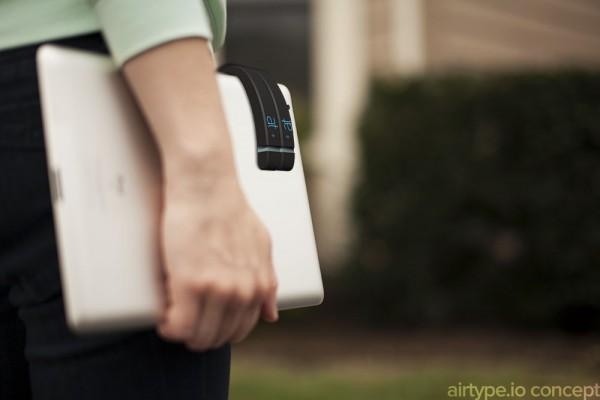 Still, it opens up many more questions than answers. The concept video below looks quite neat, but the example is one who is an experienced “touch typist”, basically someone trained to keep his or her hands on a keyboard’s “home row”. Many of today’s typists vary in training and in style and it is almost inconceivable how Air Type will learn of that without a base pattern. Still, if Air Type manages to pull through, it could very well revolutionize the way we type on mobile devices. Then again, by then, we might not need to type at all.