All-in-one PCs have always seemed a little weird, at least to me. They don’t take up as much space as a traditional computer with a tower and a monitor, but they’re not exactly portable. They also tend to be pretty expensive, though the hardware hidden away behind the screen isn’t always the best. With the new Acer Aspire 7600U, things get even more strange, with this particular all-in-one sporting a 27-inch touchscreen to go along with Windows 8, which comes installed from the get-go. It’s certainly impressive from a design perspective, but can the hardware inside keep the warm and fuzzy feelings going, or is this PC a little too underwhelming to justify it’s expensive price tag? Read on to find out.

If we were judging this simply based on looks, the Apsire 7600U would receive a glowing review. This is one sexy computer, with its 27-inch screen and a glass panel that covers the entire thing. Make no mistake, this is a big and heavy computer, but its been very well designed. Beneath the screen is a piece of glass that spans the entire width of the computer – this looks nice, but it does attract dirt and fingerprints easily. Thankfully, that doesn’t seem to be an issue with the screen itself, and even if your screen gets dirty after a while, Acer was kind enough to include a microfiber cloth to wipe it down. Ah, the little things. 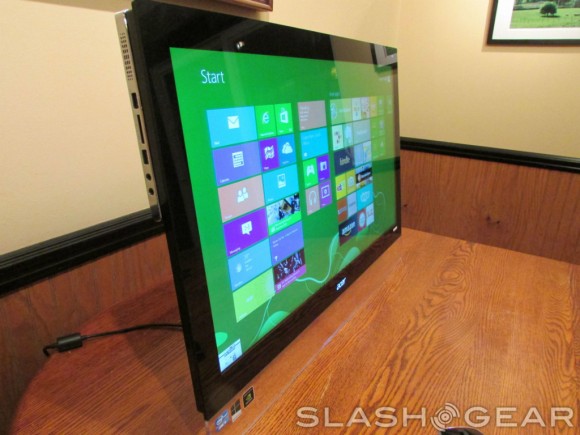 On the right side of the device is where the Blu-Ray drive and eject button are located, with nothing else to accompany them. On the left side there’s a bit more going on, with two USB 3.0 ports, a multi-card slot, and jacks for a microphone and headset. Around the back of the device there are even more ports, including two HDMI ins, one HDMI out, a set of four of USB ports (with one of them housing the Bluetooth module), Ethernet, and SPDIF. Among other things, the HDMI in ports mean you can connect an Xbox 360 or PS3 (or Wii U, if you’re lucky enough to have one already), and with a screen as nice as this, it might not be a bad idea. 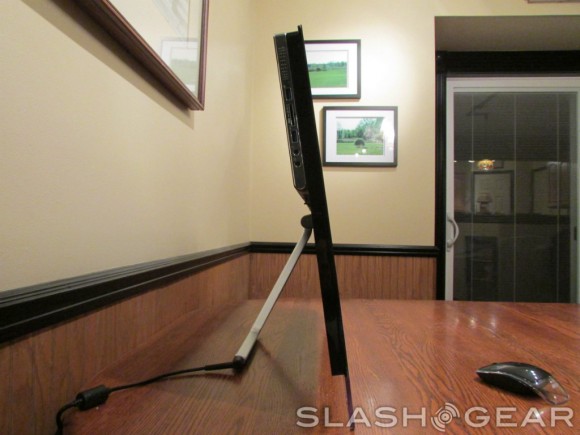 When I initially pulled the computer out of the box, I spent a good five minutes trying to find the power jack so I could, you know, actually turn this thing on. After looking all over the back and sides, I finally found it – it was on the end of the silver kickstand that’s attached to this all-in-one. That annoyed me at first, but after a while, I came to love the idea. By having the power jack there, it keeps the power cord out of the way, which means that there will be one less cord to get tangled up in the mess you’re bound to have back there before long.

The kickstand itself is nice and sturdy, and though I’m not usually a fan of them, I like this one. The silver meshes well with the overall design, and this kickstand in particular manages to look sleek while still being strong enough to hold this beast of a computer up.

All in all, this is one really nice looking computer. From a design standpoint, it doesn’t get much better than this, and the fact that it’s so slim helps with that a lot. As you get closer to the top, the thickness increases to make room for the Blu-Ray drive and the speakers, but even at it’s thickest, this computer is still pretty thin. As I said above, if we were judging this solely on looks, the Aspire 7600U would receive an excellent review. However, design is only one aspect of the equation, and it takes a back seat to things like hardware and overall ease-of-use.

The hardware found in the Aspire 7600U is somewhat underwhelming, which is a shame considering how good this computer looks. Before we jump inside, let’s talk about the screen a little more. As you already know, the 7600U offers a 27-inch screen, this one displaying at 1920×1080 resolution. I think the screen looks great – brightness is spot on for my tastes, and the colors are great. With the Blu-Ray drive this computer comes standard with, it makes a great machine for watching movies, and I have a feeling you’ll be pleased with the results if you decide to connect a game console. The screen features 10-point multitouch, which allows you to take full advantage of Windows 8. 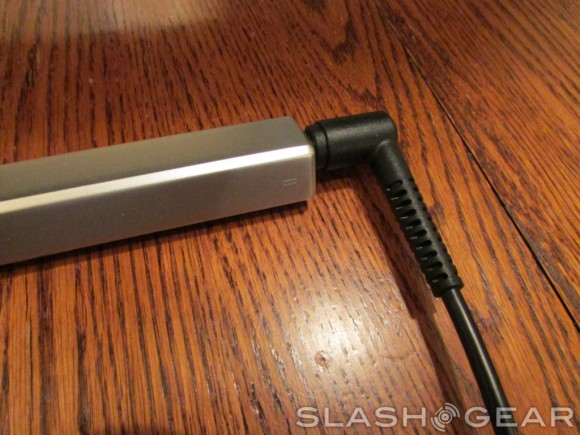 The 7600U comes equipped with an Intel Core i5 3210M clocked at 2.5GHz, which is similar to the processors we see in some ultrabooks. That should give you an idea of where this is headed – you won’t have a lot of power to work with, at least as far as the processor is concerned.

Thankfully, the Core i5 isn’t terrible, and the 7600U seems to make up for it in other areas. For instance, there are 8GB of RAM in this bad boy, which should be enough to keep things speedy most of the time. The processor may struggle occasionally, but it’s nice to have 8GB of RAM on board. 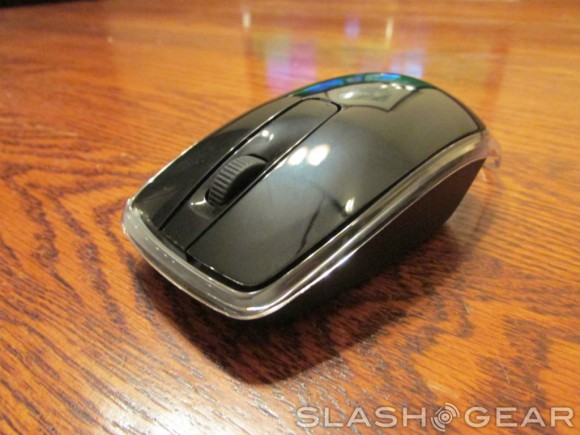 Surprisingly, the 7600U also uses discrete NVIDIA GeForce GT 640M graphics, which makes it a capable gaming rig. You’re not going to be able to crank everything up to max settings on more recent games, but the 7600U should be able run a number of games without any issues. The problem, of course, is the processor – while the GPU isn’t half bad, that doesn’t really matter if the processor isn’t all that it could be. It would have been nice to see a Core i7 in the configuration I received to review, but that would have driven costs up so high that I think Acer would have had a difficult time moving units.

The speakers on the 7600U are decent, but they aren’t great. Sounds aren’t always as full as they should, and the bass in particular could definitely use a boost. They can certainly get loud though, but you may not want to go too high if you’re watching an action movie or playing a game with a lot of explosions (which seems to be most games these days). Truth be told, you’re better off using a good pair of headphones – those will give you the good sound quality you need to go along with the excellent screen.

The 7600U also ships with a matching wireless mouse and keyboard. Both look sleek, and while I was quite pleased with the keyboard, the mouse leaves something to be desired. The mouse feels fine in the hand, though clicking the mouse buttons isn’t all that satisfying. It’s also worth pointing out that the mouse only includes left and right buttons and a scroll wheel, so you’re essentially getting the bare minimum as far as mice go. 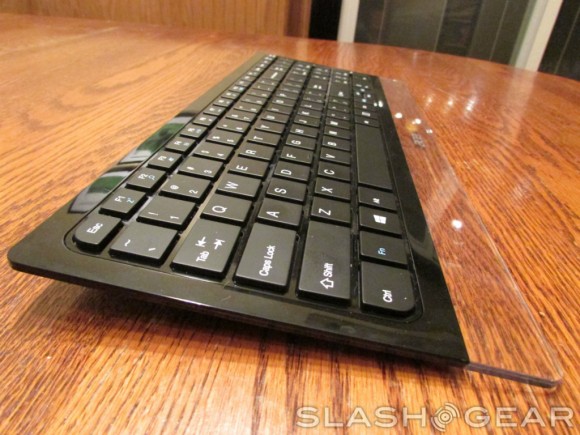 Let’s jump back to the keyboard, which I think is a pretty nice piece of equipment. The keyboard for the 7600U is very, very slim, which makes it feel a little on the delicate side, but typing on it is a pleasant experience. On this you’ll find chiclet-style keys we see on notebooks and ultrabooks, and these keys give off a satisfying sound when you hit them. The keyboard manages to pack in a full number pad while remaining quite small, which is nice. There was one small problem I ran into, though: the wireless on this keyboard seems to be a bit touchy at times. There were a few times I was trying to type something with nothing showing up on screen, but a quick adjustment was all that was needed to fix this issue.

One of the main draws of the 7600U is Windows 8. Microsoft’s new operating system is aimed directly toward touchscreens, and with 27-inches of real estate to play with, it works well on the 7600U. If you’re new to Windows 8 you’ll probably still feel completely lost for a little while starting out, but the touchscreen definitely lets you get the hang of things quickly.

You’ll have a number of pre-installed apps right from the start, but thankfully, some of them are actually useful. Acer has taken the liberty of installing apps like Evernote, Netflix, Spotify, Hulu Plus, eBay, and Kindle, so if you’re a user of some or all of those services, it’s nice to have the app ready to go right when you pull it out of the box. A trial of Cut the Rope is installed too, which makes for a perfect way of testing out the screen. 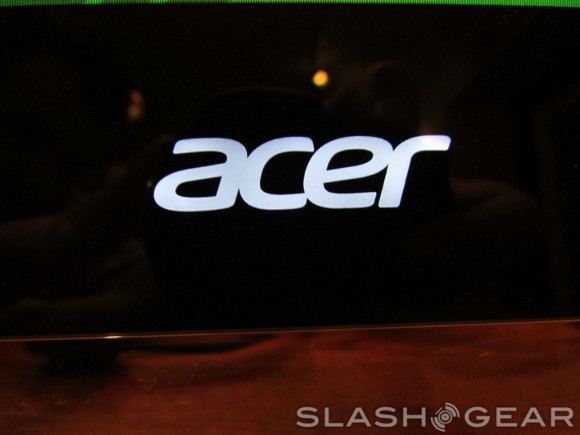 Of course, Microsoft’s programs are there in force too, with Skype, a trial of Microsoft Office 2010, and Internet Explorer present and accounted for. There are also the standard Windows 8 apps including People, Weather, Finance, News, and SkyDrive, so you’ve got a healthy serving of apps already installed before you even plug it in. You’ll have 909GB of the 7600U’s 1TB hard drive available to use, and the installed apps bring that total down to 871GB of free space – that amount should tide you over for a while, but some may want to do some cleaning once they get the computer out of the box.

Above the screen, the 7600U has a camera for video chat and gesture controls. Gesture controls don’t seem to work as well as they should, which is a shame because I could see them coming in handy. The problem is that the camera doesn’t always recognize what it is you’re trying to do – I even had issues working my way through Acer’s tutorial. Instead of popping your hand up for a quick command, often times you end up waving your arms around as if you were playing a Kinect game. It may be a better idea to skip gesture controls entirely and just use the touchscreen or the mouse and keyboard instead.

Running the 7600U through Geekbench, it’s obvious that we don’t have the most powerful computer on our hands. With a score of 8549, the 7600U actually falls in line with the ratings we see for a number of ultrabooks out there. That being said, it isn’t as if the score is a terrible one, and the 7600U does have some decent hardware running under the hood. The problem with that is the computer’s hardware doesn’t really justify the high cost.

So with the Aspire 7600U, we have a computer that’s shooting for high-end but doesn’t quite make it. The screen is definitely the star of this show at 27-inches with 1080p HD and ten-point multitouch to boot. The whole unit looks great too; no cheap looking stand, a slim design despite the fact that Acer had to cram so much hardware behind that screen, and an overall look that does scream “high-end.” 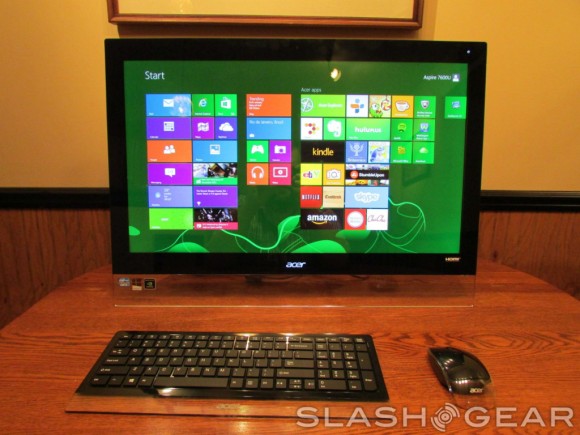 The problem, though, is with the hardware. With that $1899 price tag, it’s clear that you’re paying a lot of money for the screen, as the hardware on its own isn’t all that expensive. The Geforce GT 640M is definitely appreciated, but I feel that the Core i5 might hold it back in some instances. We’d really be rocking if the i5 had been swapped out for an i7, but that would have easily pushed the cost up above $2000, a price point Acer is clearly trying to stay under.

Don’t get me wrong, I liked the time I spent with the 7600U. I just think there will be quite a few folks who will pass at the $1899 price point. Acer did a lot of cool things with this computer, but in the end, the Aspire 7600U falls short of greatness almost every time. 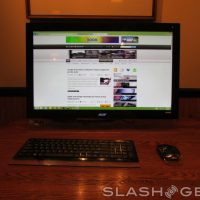 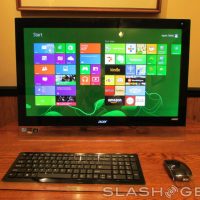 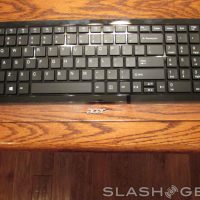 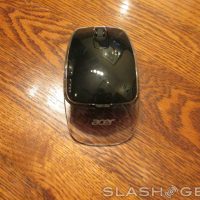 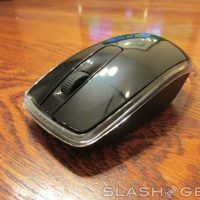 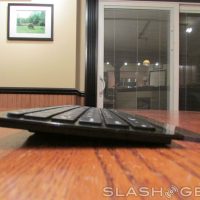 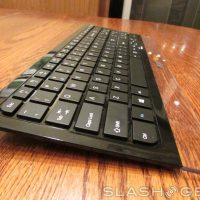 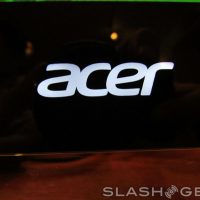 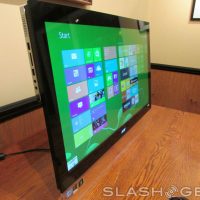 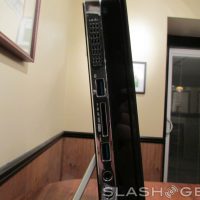 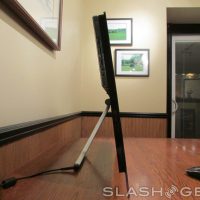 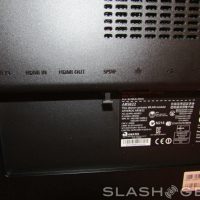 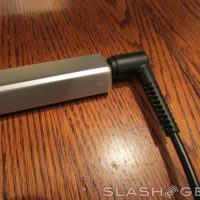