Many people have commented on the Aaron Swartz case that came to a close when the 26-year-old Internet activist committed suicide earlier this month, but now WikiLeaks has chimed in with a series of very interesting tweets. Over the weekend, the WikiLeaks Twitter account posted four tweets that detail the website’s relationship with Swartz. Through these tweets, we find out that not only did Swartz assist the website, but he also may have been a source.

We say “may have been” because apparently even WikiLeaks isn’t sure. The final tweet in the series reads “We have strong reasons to believe, but cannot prove, that Aaron Swartz was a WikiLeaks source,” suggesting that the website can’t prove if he was or wasn’t either way. The Verge points to WikiLeaks’ policy on anonymous sources to show how the website splits information on users up so even it would have a hard time identifying them. Provided WikiLeaks actually does that, then the tweet about not being able to prove Swartz was a source could be nothing but the truth, instead of WikiLeaks simply trying to cover itself. 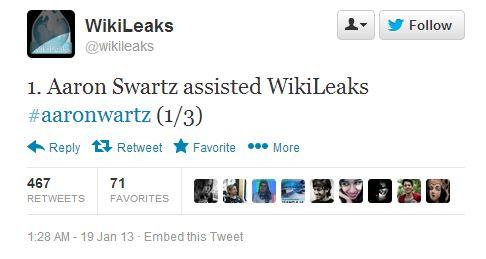 One tweet also claims that Swartz was in contact with WikiLeaks founder Julian Assange in 2010 and 2011. Given WikiLeaks’ policy of not revealing its sources, it’s easy to see why these tweets are so significant. On the other hand, it’s also difficult to know why WikiLeaks has chosen to out this information now, when it never has done anything like this in the past. After all, WikiLeaks has a history of standing up to investigators and those who would like to know information like this. 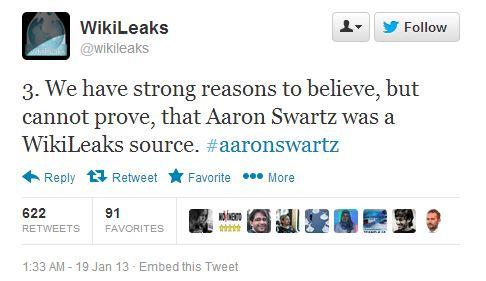 CNET got in touch with WikiLeaks representative Kristinn Hrafnsson, who confirmed that the tweets were the real deal, but didn’t say anything else. Hrafnsson did say, however, that he would answer questions at a later time, so let’s hope he sticks to that and sheds some light on these tweets. Stay tuned, because with WikiLeaks entering the conversation, things just got pretty interesting.