Yesterday President Biden made an official visit to the Ford Rouge electric vehicle plant at Ford. During the visit, Biden spoke at a podium set up in front of a giant American flag and a handful of Ford trucks. The trucks included a very clean old Ford pickup and a trio of new pickups, including what appears to be the F-150 Lightning.

The Lightning is the electric version of Ford’s pickup that swipes the name from past high-performance gasoline-powered pickup models. The silver truck on the end appears to be the Lightning, and the truck wasn’t supposed to be officially unveiled until later today. From the images, which were grabbed from a video from the White House posted to YouTube, we can see the truck has the same body as other 2022 F-150 pickups, but rolls on unique wheels and has a unique grille and headlight area to give it a modern look befitting an electric truck. 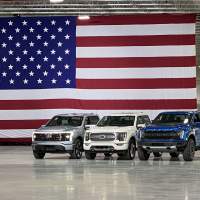 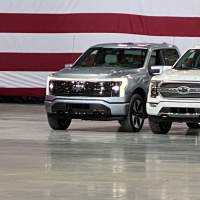 The images confirm the Lightning has four doors, which is expected as it’s the most popular style of pickup today. The expectation is the truck features the short 5.5-foot bed featured on other four-door F-150 trucks. The unique wheels are presumably exclusive to the electric version of the pickup.

And there it is. The electric @Ford F-150 Lightning ahead of comments by @POTUS. pic.twitter.com/IF0baIT55w

While all the official details in the truck will be revealed today, the expectation is it will feature dual electric motors with one motor powering each axle providing all-wheel drive. Ford has previously stated that the Lightning will feature more power and be faster than other versions of the pickup.