The Jaguar F-Type lives in a competitively niche market. Flanked by the Porsche 911 and BMW 8-Series, the F-Type is dedicated to purists, much in the same manner that a Mazda Miata MX-5 aims to thrill the enthusiast’s senses. When the F-Type first launched in 2013, it instantly gained recognition as the evolution of the luscious E-Type from the 1960s. Those teardrop-shaped headlights, the classic sportscar proportions of bulbous rump and long hood… oh, and it behaved like a proper Jag as well. Gutsy engines, a standard manual gearbox, rear-wheel drive, and that iconic silhouette. When you’re taking inspiration from the past, choosing a car so gorgeous that old man Ferrari thought it to be the most beautiful machine with four wheels isn’t a bad place to begin.

For the 2021 Jaguar F-Type, the designers were clearly aiming for a more aggressive, prowling, and assertive vibe. And you know what, it works. “The new F-Type embodies true Jaguar design DNA,” Julian Thompson, Jaguar Design Director, explained to me. “Designing the most beautiful sports car, with purity, proportion, and presence that’s unmistakably Jaguar: that was the challenge we set ourselves. The new F-Type is more dramatic than ever, with even greater clarity of purpose in every line, surface, and feature.” 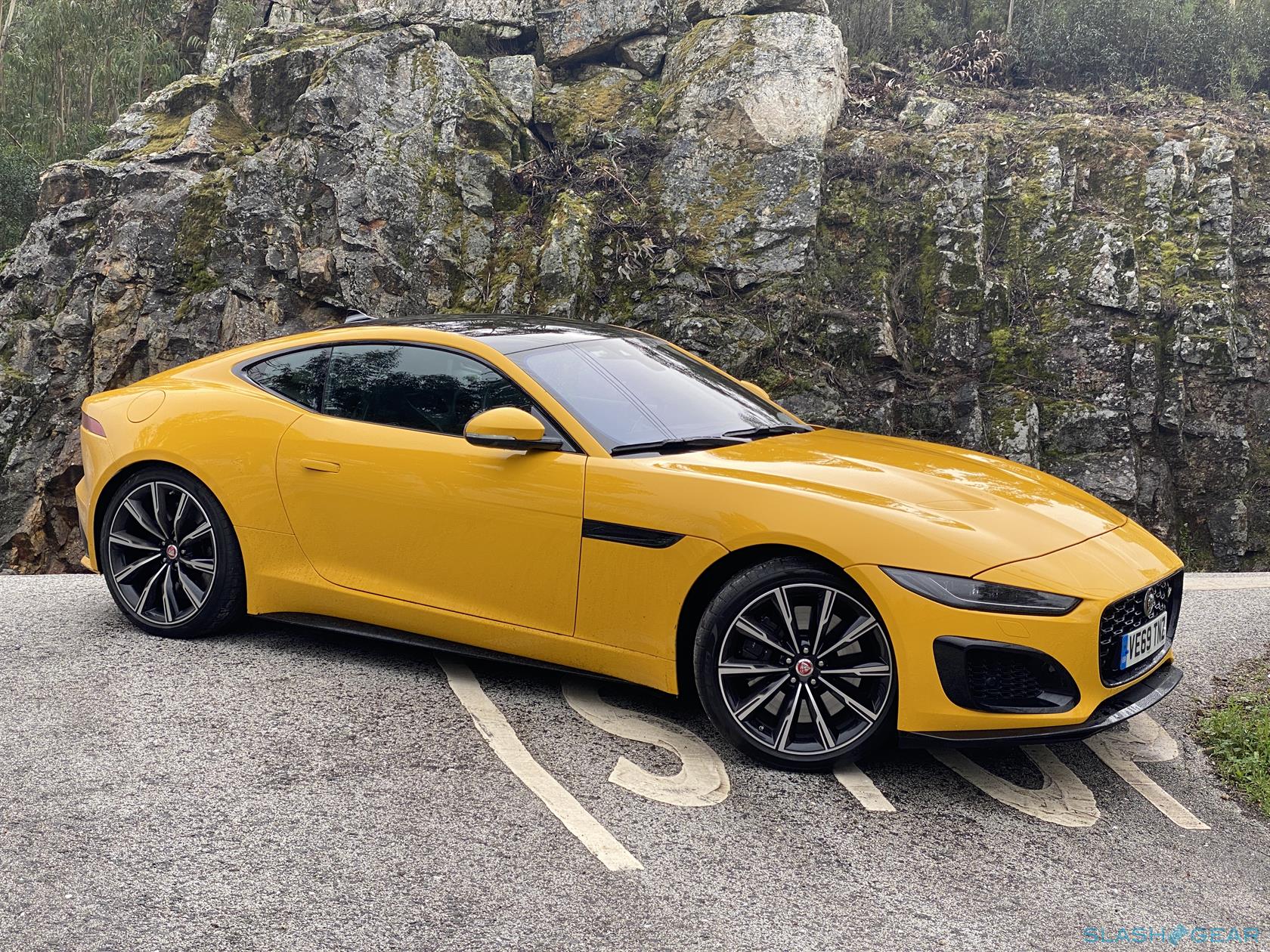 The previous F-Type’s fascia was a little more wide-eyed and happy; this new version is a lot more brooding. Most obviously, the outdated headlights were shown the door and are now replaced with slimmer, sassier, and more modern LED pixel units with the signature daytime running lamps. They’re now standard across the entire model range. 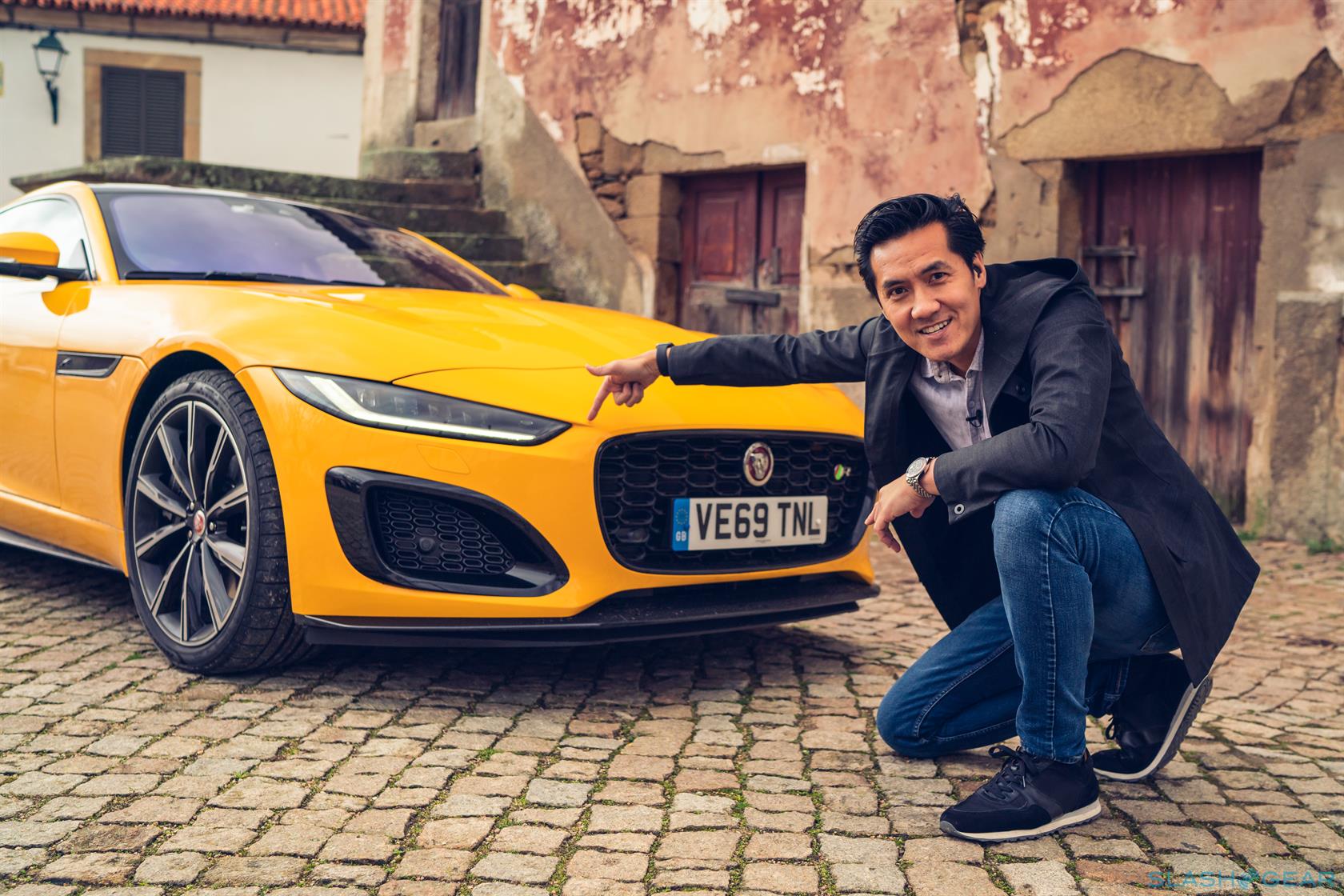 Smack in the middle is a new black mesh grille, while the vehicle also has a resculpted front bumper. The clamshell bonnet has been redesigned with more flowing surfaces, along with a pair of repositioned and enlarged air vents to offer better cooling and aero efficiency. The previous F-Type had a playful face, but the new model is all grown up and buttoned-down.

Out in the back, there are slimmer taillights though the F-Type keeps the familiar chicane light strip from the outgoing model. Overall, it’s a clean update, and though the changes may be relatively minor the improvement is more than the sum of those parts. “The F-Type is one of the most beautiful sports cars on the road, and I think it remains the definitive Jaguar sports car,” Taylor Hoel, Jaguar PR, and communications manager argues, and though he’s biased I can’t disagree. “The personality of this car really lends itself to just having some fun.” 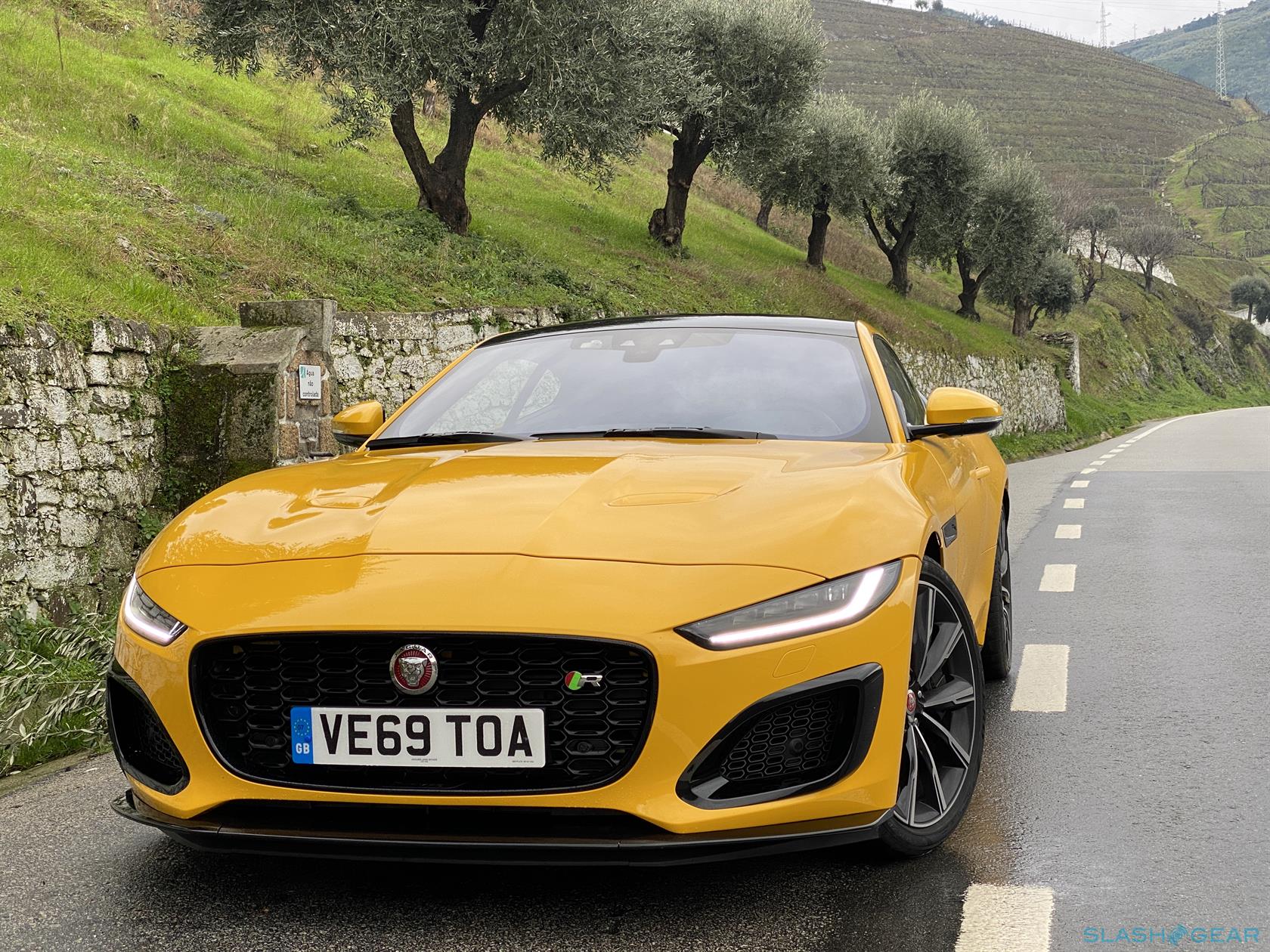 Without a doubt, the new F-Type is an important car for Jaguar. In fact, within the automaker the F-Type is considered one of the three pillars of the Jaguar brand, alongside the X family (XE, XF, and eventually the all-electric XJ) and the PACE family (E-Pace, F-Pace, and electric I-Pace). Yes, the redesigned F-Type is still riding on its first-generation platform, but Jaguar is doing the right thing with its ‘don’t fix what isn’t broke’ approach in this update.

With each pillar or family having an all-electric vehicle in the lineup, is it foolish to expect an all-electric F-Type in the near future? At this point, electrification is clearly a big element on Jaguar’s roadmap, but I’m not sure if the brand is interested in competing with Tesla Roadster v2.0 in the luxury sports coupe segment. What I do know is an all-electric XJ is waiting in the wings, and Jaguar is making significant investments in its Castle Bromwich assembly plant in Birmingham to accommodate its expanding lineup of all-electric vehicles. 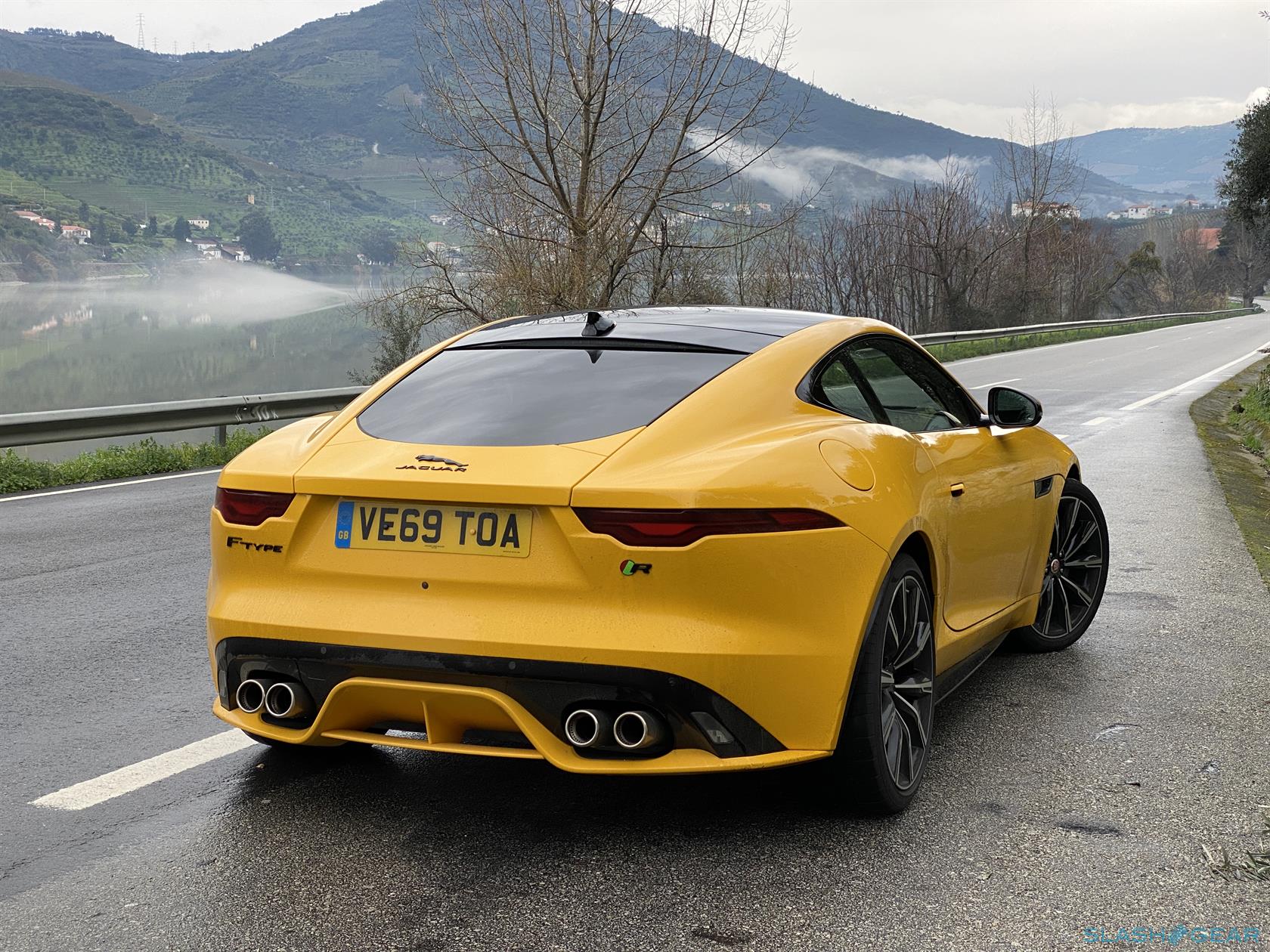 So, it’s internal combustion that we have to play with here, and motivating the 2021 F-Type are a slew of familiar engine choices. The base P300 model still gets a punchy 2.0-liter turbocharged four-cylinder mill, with 296-horsepower and 295 pound-feet of torque. All that grunt is channeled to the rear wheels via an eight-speed automatic transmission only. That’s right: no manual transmission any more. All new F-Types are now only available with an eight-speed automatic, while the base model is the only version to have rear-wheel-drive. 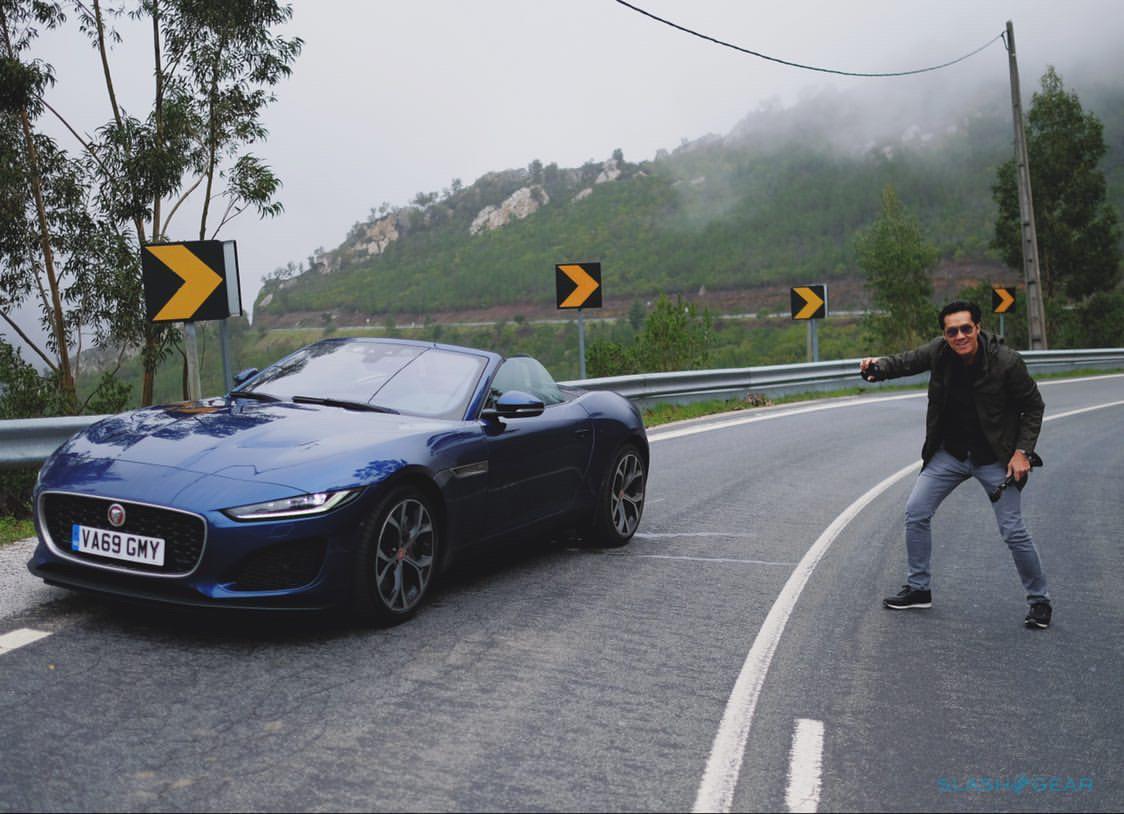 Next up is the F-Type R-Dynamic P380, with a supercharged 3.0-liter V6 packing 380-horsepower and 339 pound-feet of torque. It comes with standard all-wheel-drive, with a limited-slip differential with torque vectoring for better grip and handling.

The bonkers F-Type R is now equipped with the high-output supercharged V8 from the previous model’s SVR trim. This means the new F-Type R is pushing 575-horsepower and 516 pound-feet of torque to all four wheels. I’d have loved a stick shift option here, but Jaguar’s eight-speed Quickshift auto unit offers full manual control capability for those insisting on rowing their own gears. 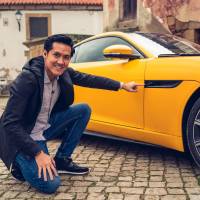 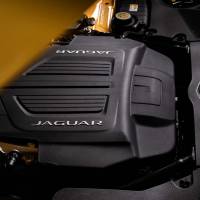 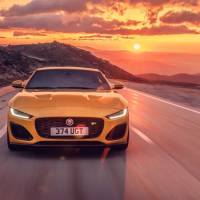 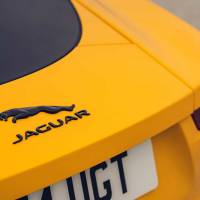 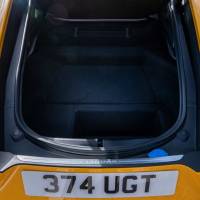 Using the same shift logic program derived from the Project 8 vehicle, the new transmission is essentially a high-torque version of ZF’s 8-speed auto. Lightning-fast shifts are executed via the standard wheel-mounted paddle shifters or by simply fiddling with the SportShift gear selector. All F-Type models also have a manually-configurable active exhaust system, with the R version having a Quiet Start mode so as not to annoy the neighbors in the morning. The most powerful version of the F-Type has no problem rushing to 60 mph in just 3.5-seconds and towards a maximum speed of 186 mph. Meanwhile, the F-Type P300 achieves the same in 5.4-seconds with a top speed of 155 mph. 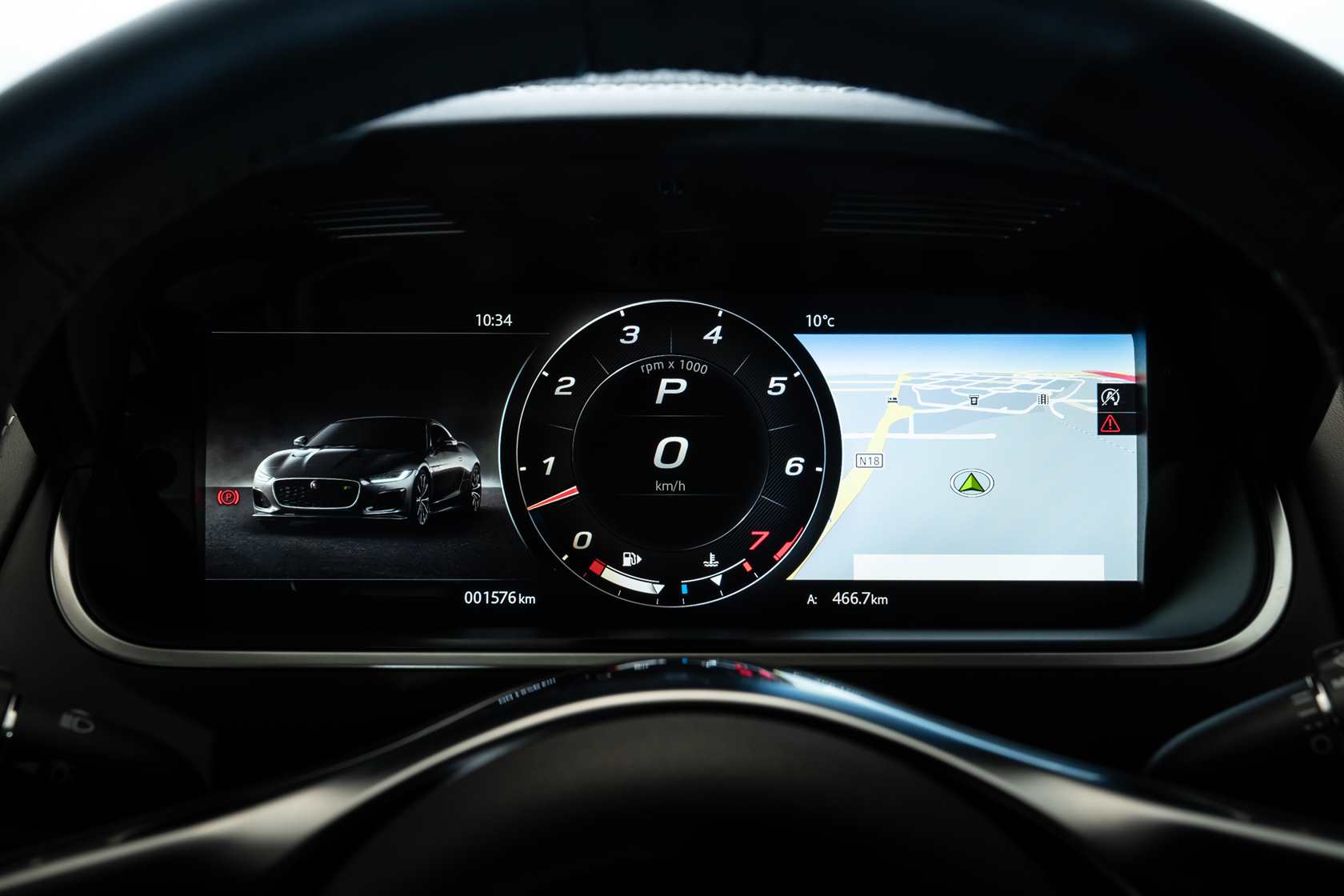 Inside, the new F-Type has a more premium vibe. Where the previous model looked good but was peppered with bits and pieces of cheap-feeling plastic, the new F-Type’s interior is now festooned with delectable monogram stitching and luxurious materials like Windsor Leather, Noble Chrome, and premium Suedecloth. “Jaguar has been making sports cars for more than 70 years, and that rich heritage has inspired the team to create something truly extraordinary,” Thompson says. “State-of-the-art technologies together with luxurious materials and finished deliver beauty with purpose in an interior which will delight driver and passengers alike.” 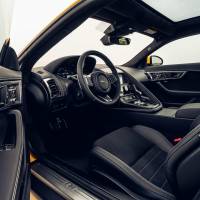 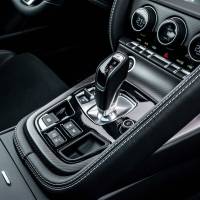 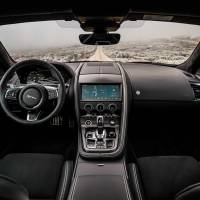 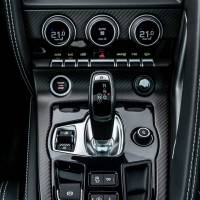 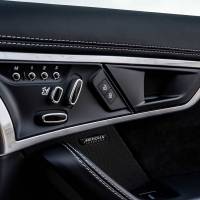 The driver gets a new 12-inch HD digital instrument cluster with unique graphics. In the default display mode, the large rev counter sits in the middle of the display, channeling some Porsche 911 DNA. The center air vents motor out of the dashboard cowl, while the pulsing red START button adds a theatrical sense of occasion as you start the vehicle. You still get Jaguar’s Touch Pro infotainment system with a 10-inch center touchscreen, matched with three tactile rotary controllers for the HVAC, along with Apple CarPlay, Android Auto, and the promise of over-the-air updates. 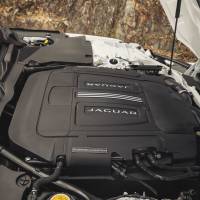 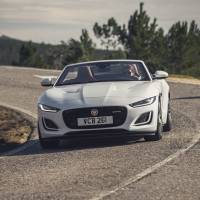 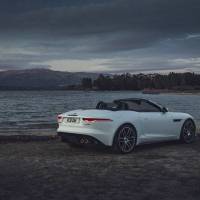 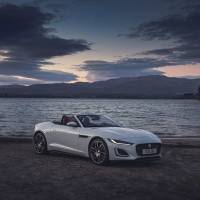 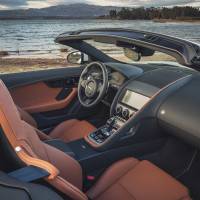 It doesn’t take much seat time in the 2021 Jaguar F-Type to recognize that the tighter handling, taut yet compliant ride, and tamed-down exhaust notes were the overall highlights. The V6-powered P380 wasn’t available to drive, but instead there no shortage of playtime with the base P300 and V8-powered F-Type R. Jaguar had pitched the experience as a “road trip” through Portugal, and it wasn’t kidding. 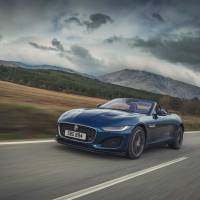 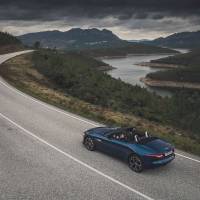 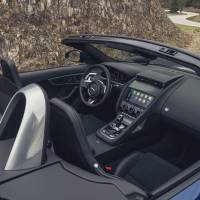 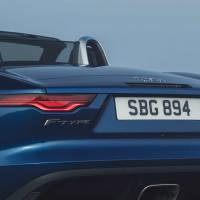 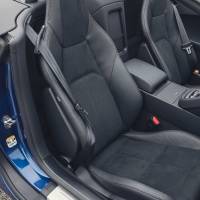 As routes go, our dynamic drive from Porto to Lisbon proved to be exquisitely engaging. Honestly, it didn’t really matter whether I was driving the F-Type R or the lesser-powered P300: the tight twisty switchbacks, fast-long sweeping turns, and usually perfect-length straightaways that always seemed to connect them were gratifying either way.

The P300 may only have a plucky four-banger, but the driving dynamics were spot-on – perfect for the novice, intermediate, or younger drivers. Clearly, though, the retuned chassis and suspension are capable of dealing with more ruckus. For obvious reason, the lighter four-cylinder engine made the front end feel nimbler, especially noticeable when you’re quickly turning in and then stomping on the gas pedal out of a corner. 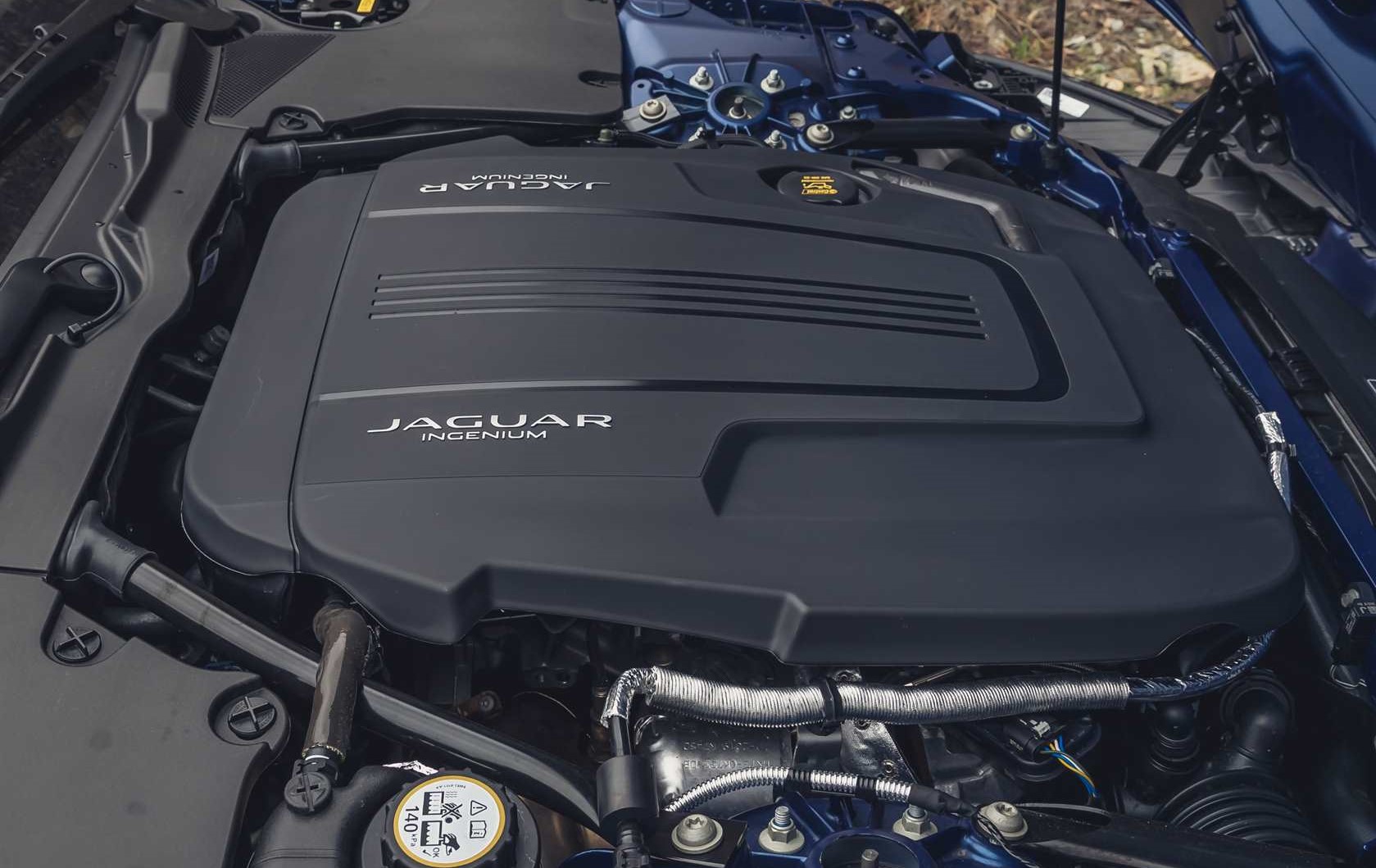 For the most part, the transmission was smooth as butter, but it was more satisfied with using the manual paddle shifters. Third gear was perfect: I’d lift on the gas pedal right before a turn, then press hard to exit – full throttle through the straight until it redlined and repeated the cycle over and over. On longer straights, shifting into fourth gear and then dropping back into third was drama-free. Oh, and did I mention that despite the gloomy, overcast weather with a little drizzle, we kept the top down for most of the drive? Entry-level sports car experiences don’t get much more glorious.

With that, enter the F-Type R. It takes full advantage of the new F-Type’s reworked electronic dampers, springs, ball joints, and upper control arms. Now the last F-Type R with rear-wheel-drive was quite a handful, and I’m being kind here. Sure, it had the noise and panache to back up its marvelous style, but it had a tendency to behave like an old-school American muscle car through the curves.

For the 2021 model year, Jaguar fiddled with the electric power steering, installed new lower-friction wheel bearings, and reprogrammed the stability control along with the car’s rear electronic differential – all the better to make the most of that magnificent 575-horsepower supercharged V8. Coupled with a new AWD system with a rear-biased torque split and wider rear tires, the 2020 F-Type R feels perkier and more capable of hugging the curves without giving the driver or my co-driver an imminent stroke. Driving full-bore along Portugal’s glorious N222, the F-Type R felt reassuring and blindingly quick, despite the sudden onset of rain and slick roads.

The steering felt more direct while the exhaust remained as loud as I can remember. Only now, it’s not as insufferable as it used to be at cold starts courtesy of Quiet mode, which is left ON in default mode. The good thing is you can turn it off, but why bother? Loud starts are so last year.

Thankfully, what hasn’t changed is the rather playful yet naughty behavior of the F-Type. My only minor gripe was the brakes, which felt undetermined every now and then. Thankfully, Jaguar has optional carbon-ceramic brakes to address the issue. I also think the new quad-exhaust system in the F-Type R is still great and looks great, but depending on how much time you spent with the old car you might feel like some of that unique character was lost when Jaguar finessed the vocal cords. Given time, I suspect you’ll come to appreciate the newfound sense of athleticism the F-Type never knew it had. 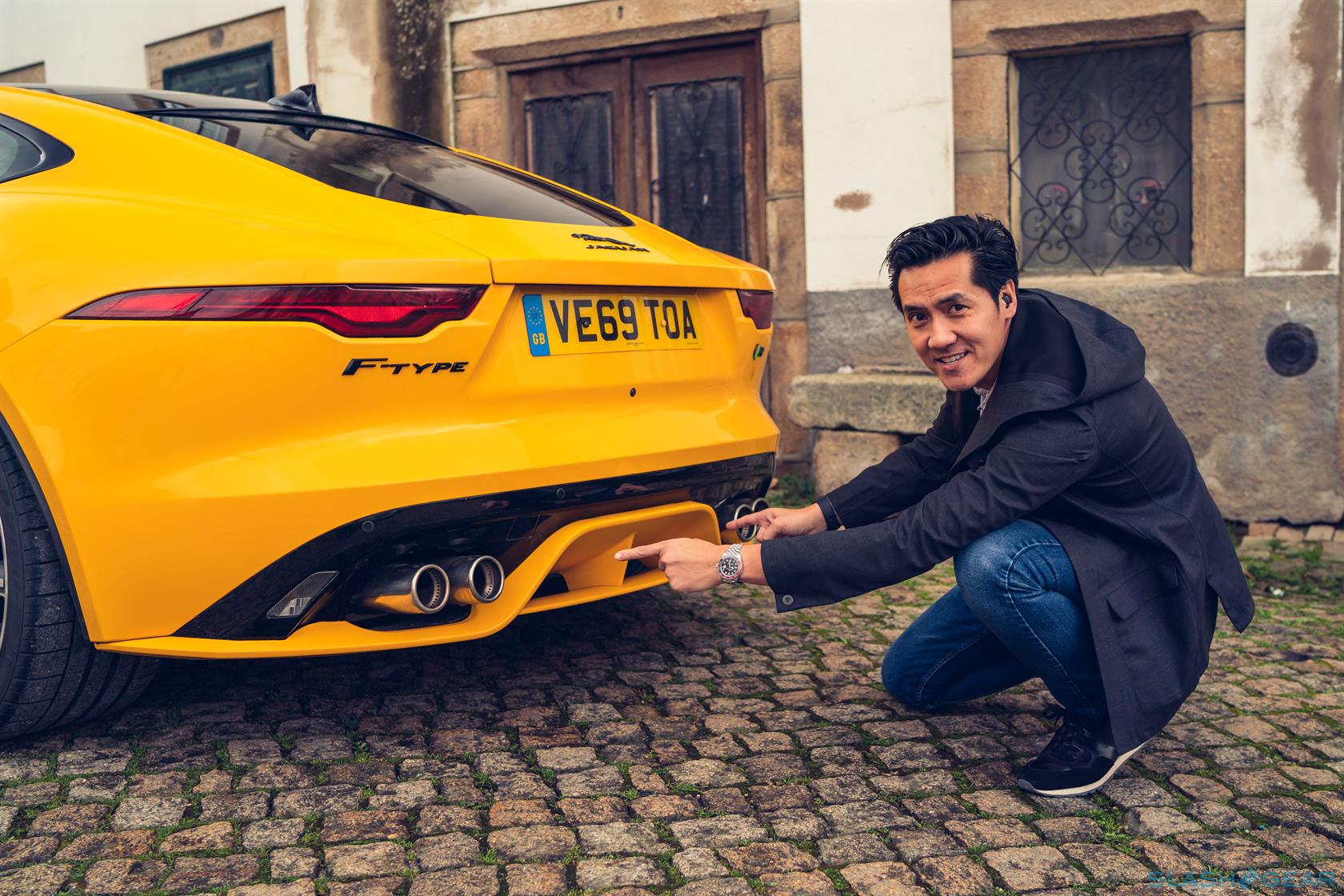 Considering the new F-Type is comprehensively restyled and reengineered, it’s notable that Jaguar did it without significantly hiking its base prices. The F-Type P300 starts at $61,600 (add $1,025 for destination and handling) while the convertible starts at $64,700. Meanwhile, there’s an F-Type First Edition P300 model retailing for $73,100 (coupe) and $75,400 (convertible). 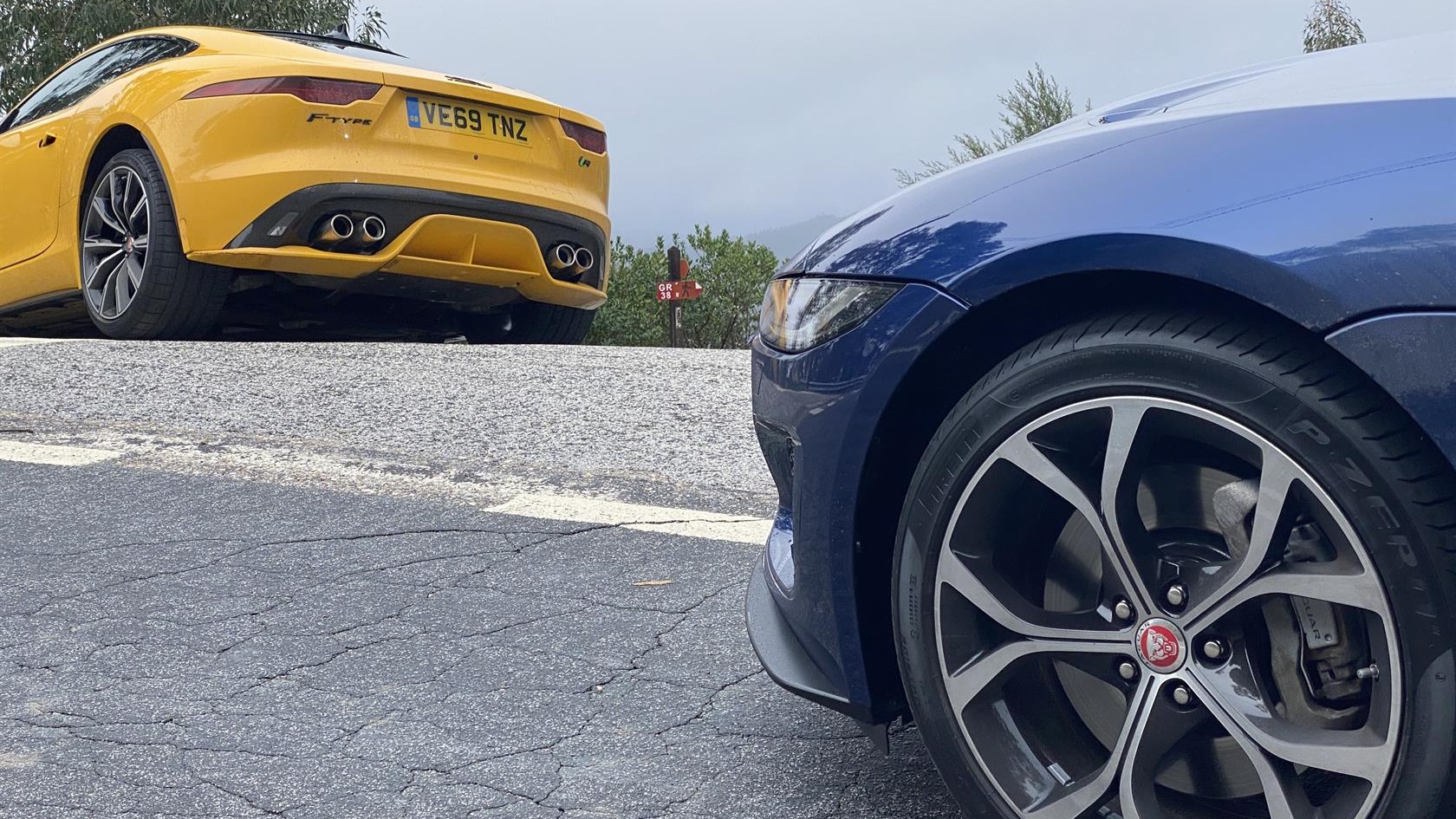 At a time when most automakers seem to treat each new generation as an excuse to just push up the pricing, Jaguar’s strategy here is a blast of fresh air. That it comes with styling so glorious is icing on the cake. If you’ve always hankered for the F-Type, but found it either too rebellious, too obnoxious, or simply not luxurious enough to merit the leaping cat badge, you’ll have plenty to croon about in the 2021 F-Type.