When it comes to hauling the family around, there are plenty of big SUVs out there to choose from. Toyota’s big SUV option is the Sequoia, and for 2020 the ride gets a new options package. The 2020 Toyota Sequoia TRD Pro aims to open a path for family adventures, and the ride has some TRD Pro design and equipment touches to make it look and perform better. The SUV packs a 381hp 5.7L V8 under the hood.

The TRD Pro Sequoia joins the TRD lineup that already includes the Tacoma TRD Pro, Tundra TRD Pro, and 4Runner TRD Pro. The 2020 Sequoia maintains the body-on-frame construction, four-wheel independent suspension, and generous ground clearance along with its V8 engine. TRD Pro Sequoia buyers get a standard Multi-Mode 4WD mode that is optional on other grades.

Rear shocks are 2-inch diameter and have bottom-out-control and larger pistons than regular Sequoia shocks. Other features include a TRD Pro grille, LED headlights, and Rigid LED fog lights. The SUV has 18×8-inch black BBS wheels made of forged aluminum. 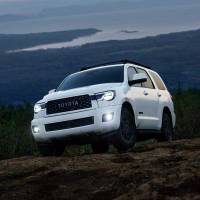 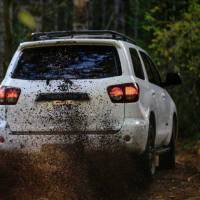 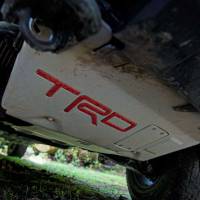 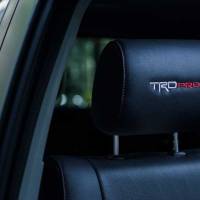 The tires are P275/65 R18 units. Buyers can choose a TRD Pro-exclusive Army Green color or other colors including Super White, Midnight Black Metallic and Magnetic Gray Metallic. The ride also gets a front skid plate for protection and cast aluminum running boards and a roof rack. All 2020 Sequoias get the Toyota Safety Sense-P package; pricing is unannounced at this time.