It’s been 22 years since the first-generation Toyota RAV4 arrived in US shores. Back then, compact-based crossovers or small SUVs were as ubiquitous as smartphones, emojis, and selfies – in short, it was a tiny market, compared to the behemoth it has become today. Who would have thought larger SUVs would take the place of family sedans or station wagons as the everyday driver?

Where the new Honda CR-V is still focused on a car-like approach to its styling – as, arguably, it should be, since the CR-V is still based on the 10th-gen Civic platform – Toyota took a completely different approach for the new 2019 RAV4. Gone are the soft styling cues; in instead comes a more rugged, go-anywhere design. 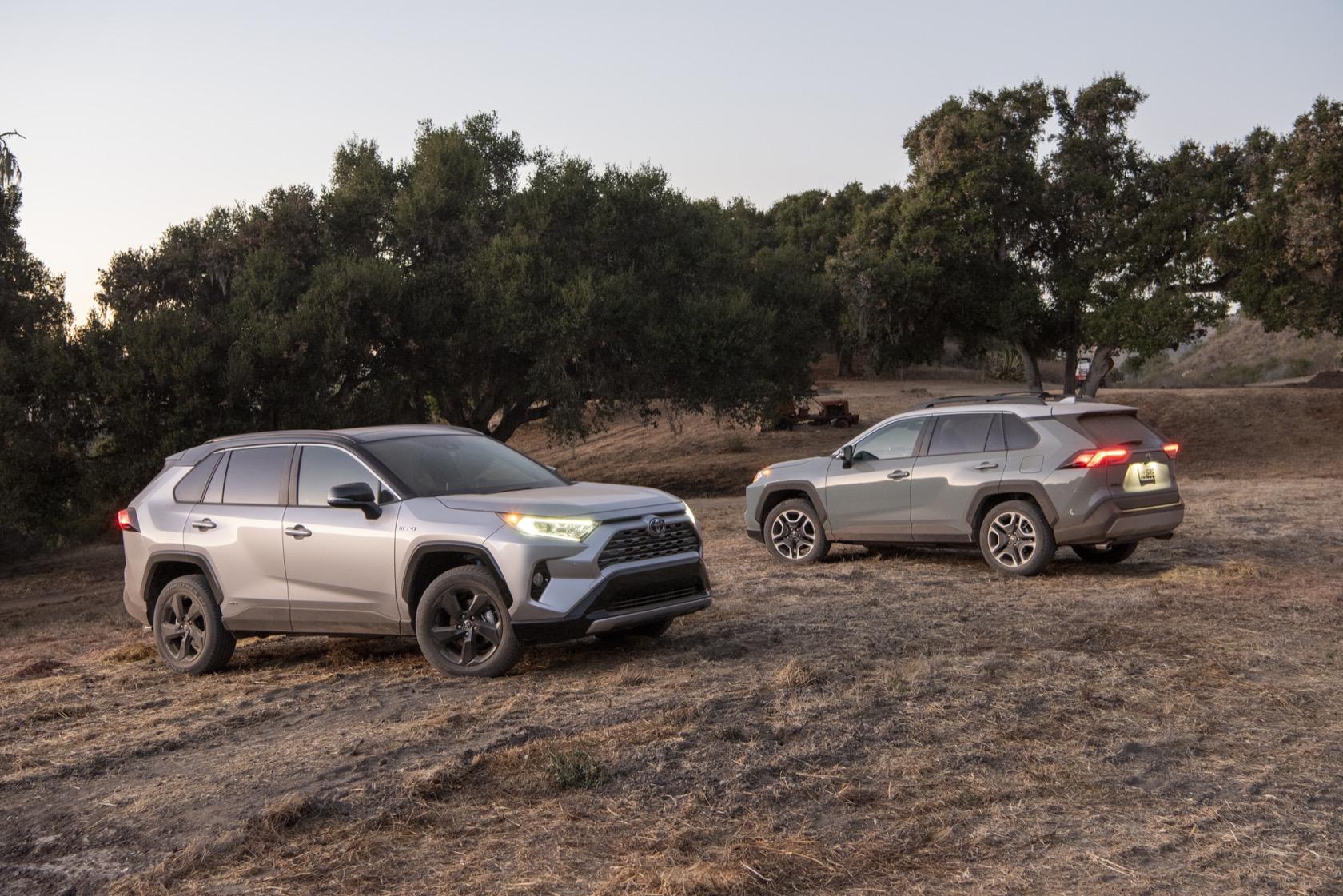 As a result, the fifth-generation RAV4 adopts what you might think of as “authentic” SUV proportions: taller ride height and a higher seating position, boosting outward visibility. On the inside, depending on the trim level, you can expect a blend of soft-touch plastics and premium materials to improve the feeling of luxury and refinement. The new RAV4 will have to be all that while still having better driving dynamics, stronger acceleration, and enhanced fuel economy if it wants to compete.

It’s a tall order for what the unkind could classify as a Corolla on stilts. So what did Toyota do? They looked at the current Toyota 4Runner and said: “Why not give the new RAV4 the face of the 4Runner? And while we’re at it, why not give it the same squared-off wheel arches too?” Looking at the two SUVs side-by-side from the front, they sure look like they were cut from the same cloth; I’m totally fine with that. 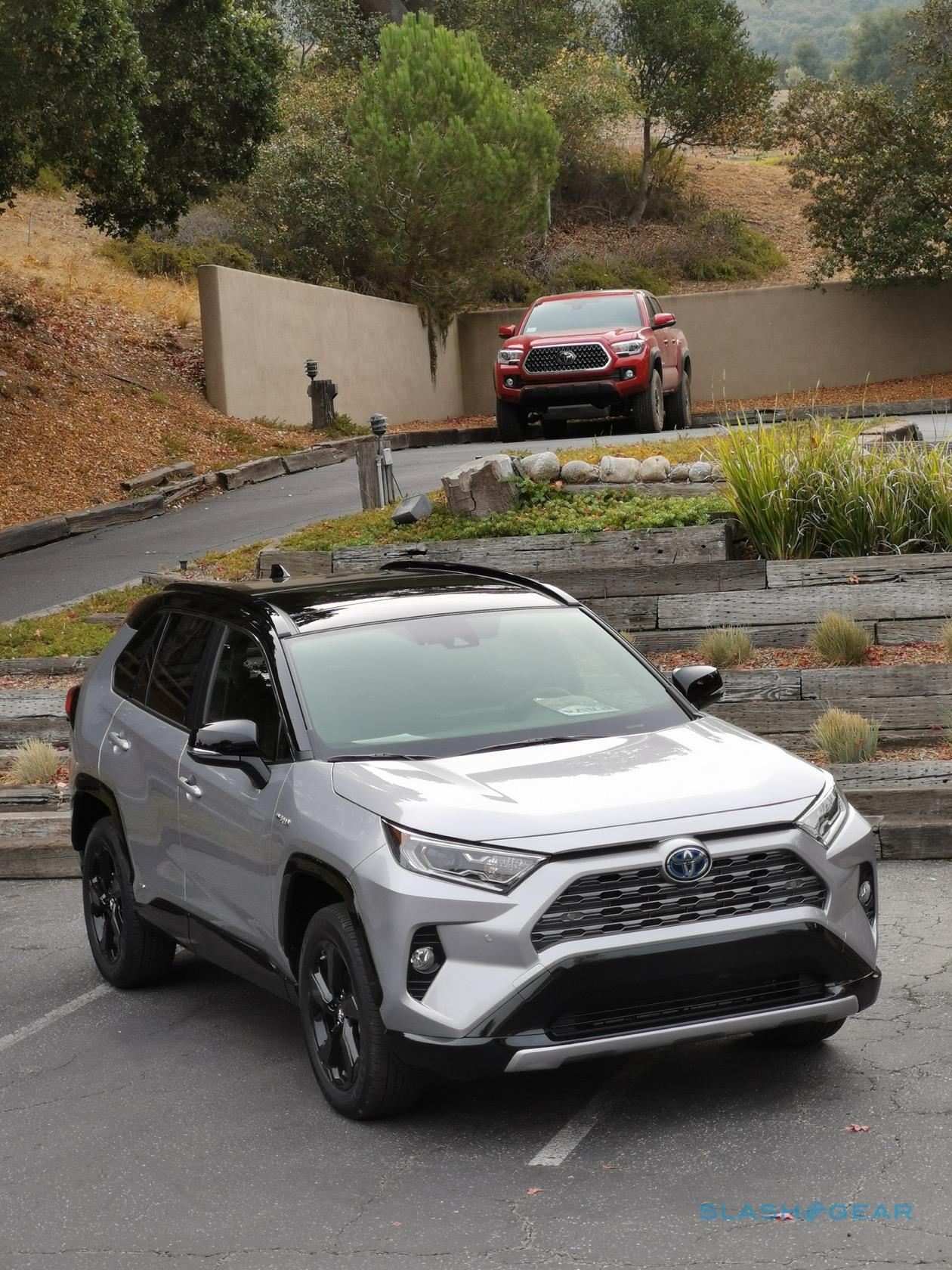 Viewed from certain angles there’s some resemblance to the defunct FJ Cruiser as well. Make no mistake, though: the bolder and wider body design makes the new RAV4 stand out from its main competitors, the Honda CR-V and Mazda CX-5. Some might say that it lacks the sporty and luxurious flair of the CX-5, but then again, the 2019 RAV4 can hold its own just fine off the beaten path.

“we came to define ‘Adventure Refinement’ as the design concept for the fifth-generation RAV4,” RAV4 Chief Engineer Yoshikazu Saeki explained to me. “At the very beginning of the design process, we reviewed RAV4’s distinct product value and considered how best to evolve the original concept of ‘an off-road vehicle built for urban environments that’s a pleasure to drive and look at.'” 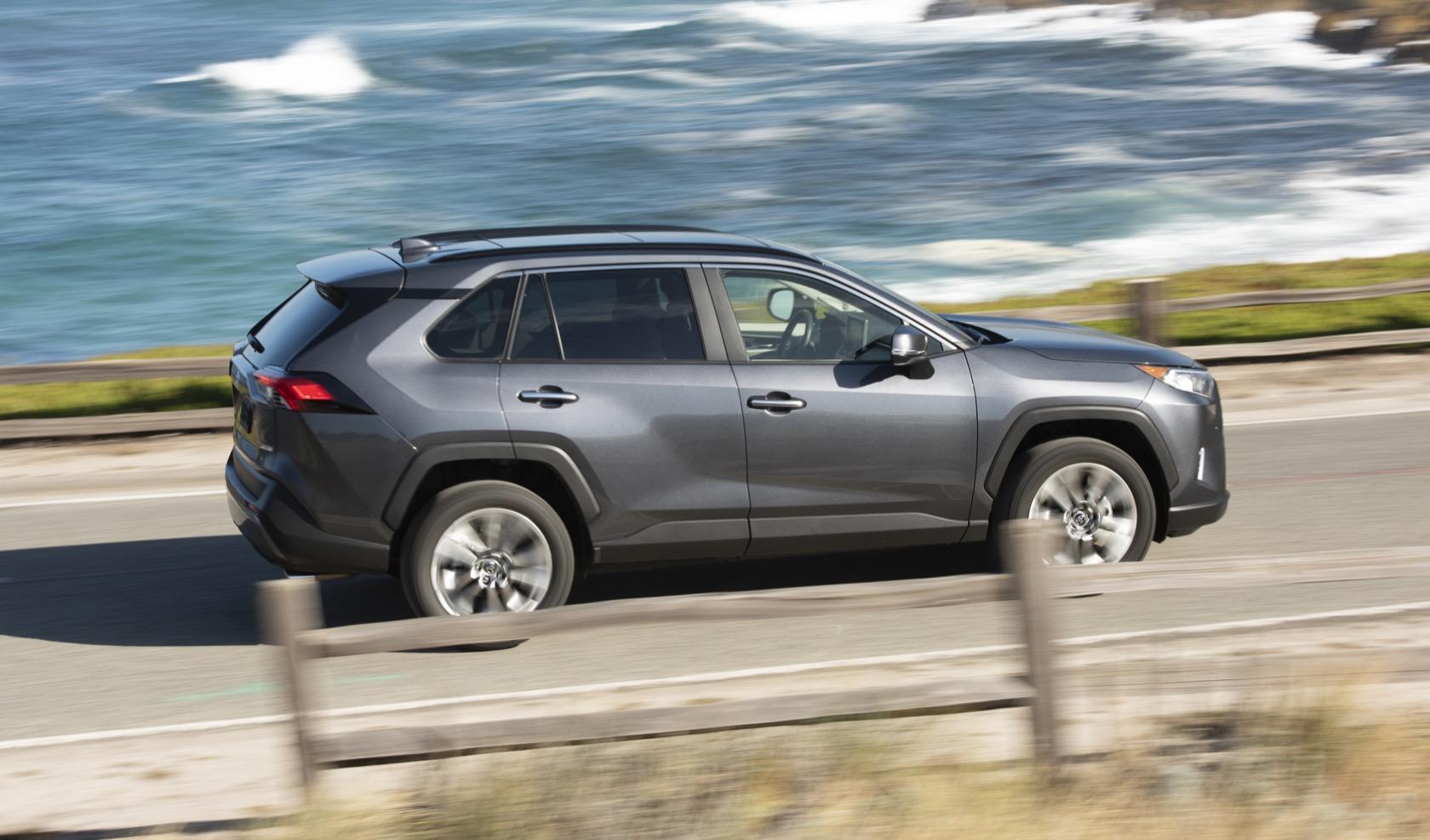 The increased ground clearance is immediately obvious. The 2019 Toyota RAV4 has a longer wheelbase despite being 0.2-inches shorter than the previous model. It’s 2.3-inches higher for a total of 8.4-inches, which pays dividends when forging over more challenging terrain without needing to worry so much about scraping the bumpers or the underside of the vehicle. The square fenders can house larger 19-inch wheels, and visually enhance the sense of width and purpose. Still, for all it promises the eyes, you should be aware that the RAV4 doesn’t have skid plates, so don’t go too wild off-road. 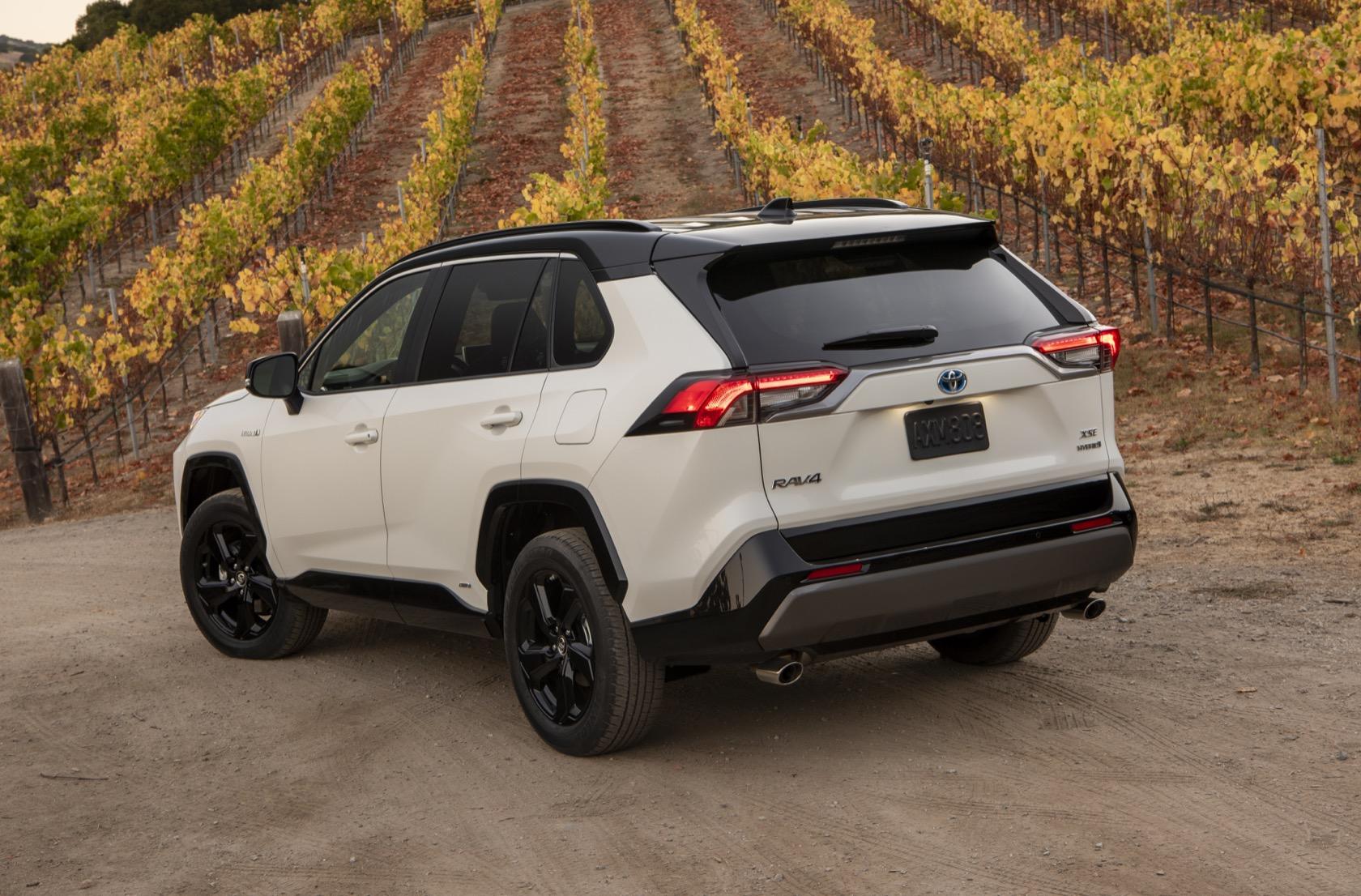 If the front is all about ruggedness and the feeling of adventure, the rear styling in the new RAV4 is sporty and modern. The angular rear combination lamps are equipped with aero stabilizing fins. Even the shape of the door handles is sculpted to create a smoother airflow. The larger rear spoiler and the side fins are designed to further improve aerodynamic performance, despite what you might think about slab-sided SUVs.

Adding to the improved aero – as well as better side clearance – are the repositioned rear view mirrors. It’s a small change in the grand scheme of things, but proved to be highly appreciated as we navigated through tighter terrain during the off-road section of the Toyota’s test course.

All versions of the 2019 Toyota RAV4 get a new 2.5-liter Dynamic Force four-cylinder engine with 203 horsepower and 184 pound-feet of torque. With a high 13:1 compression ratio, dual overhead camshafts, electric-driven variable valve timing system or VVT-iE, direct and secondary port injection, and the new 8-speed Direct-Shift automatic, the engine gives the RAV4 a more responsive and engaging feel without any penalties in fuel economy. In fact, the EPA rates the new Toyota RAV4 front-wheel drive at 26/34/29 mpg for city, highway, and combined. 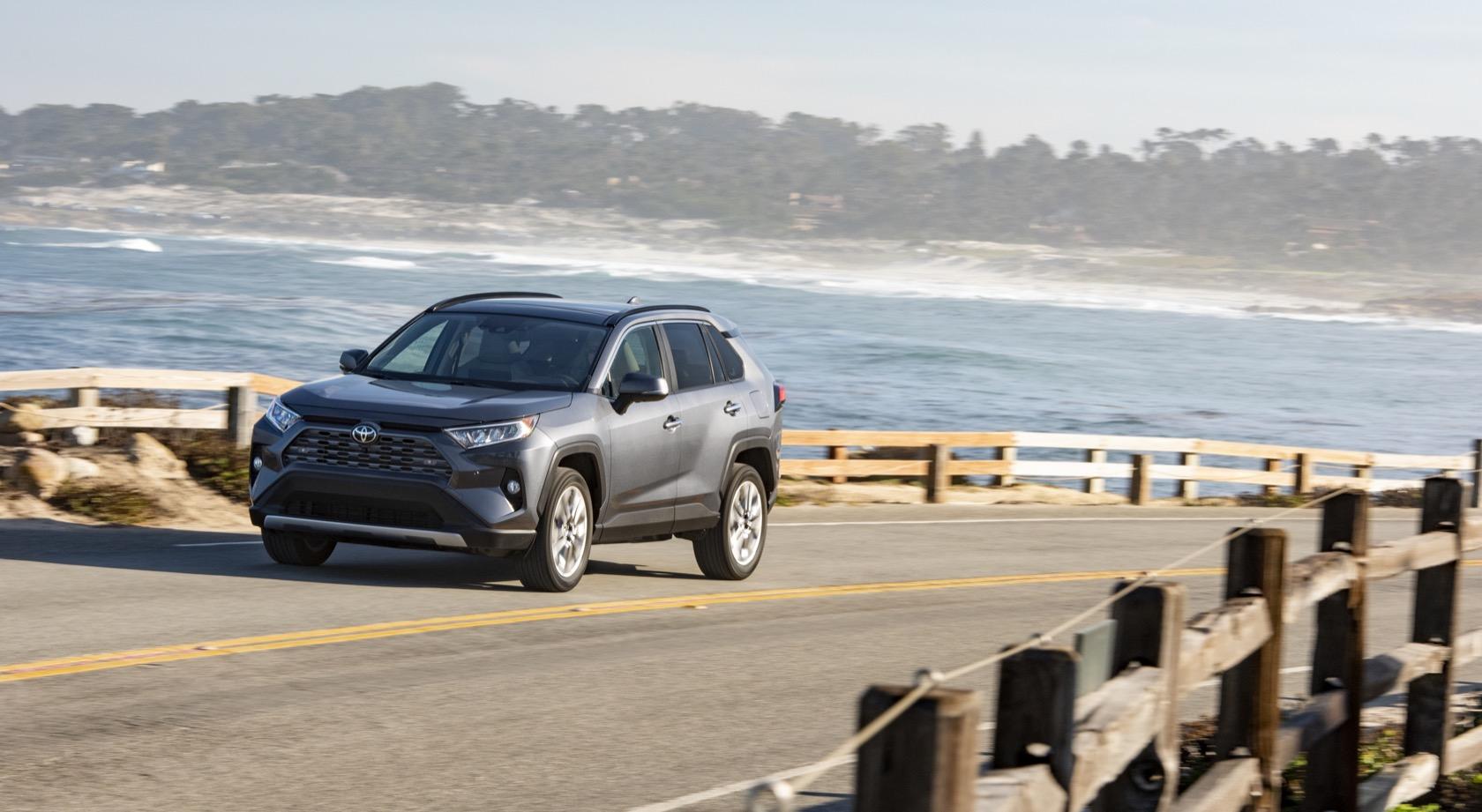 The digital rearview mirror could be disorienting at first but, once you’re used to it, it’s rather nice to use. It uses a wide-angle camera at the back of the car, and provides a wider field of view as well as no second-row heads in the way. There are some instances where the traditional mirror works better, but you can flip the center tab to switch over. 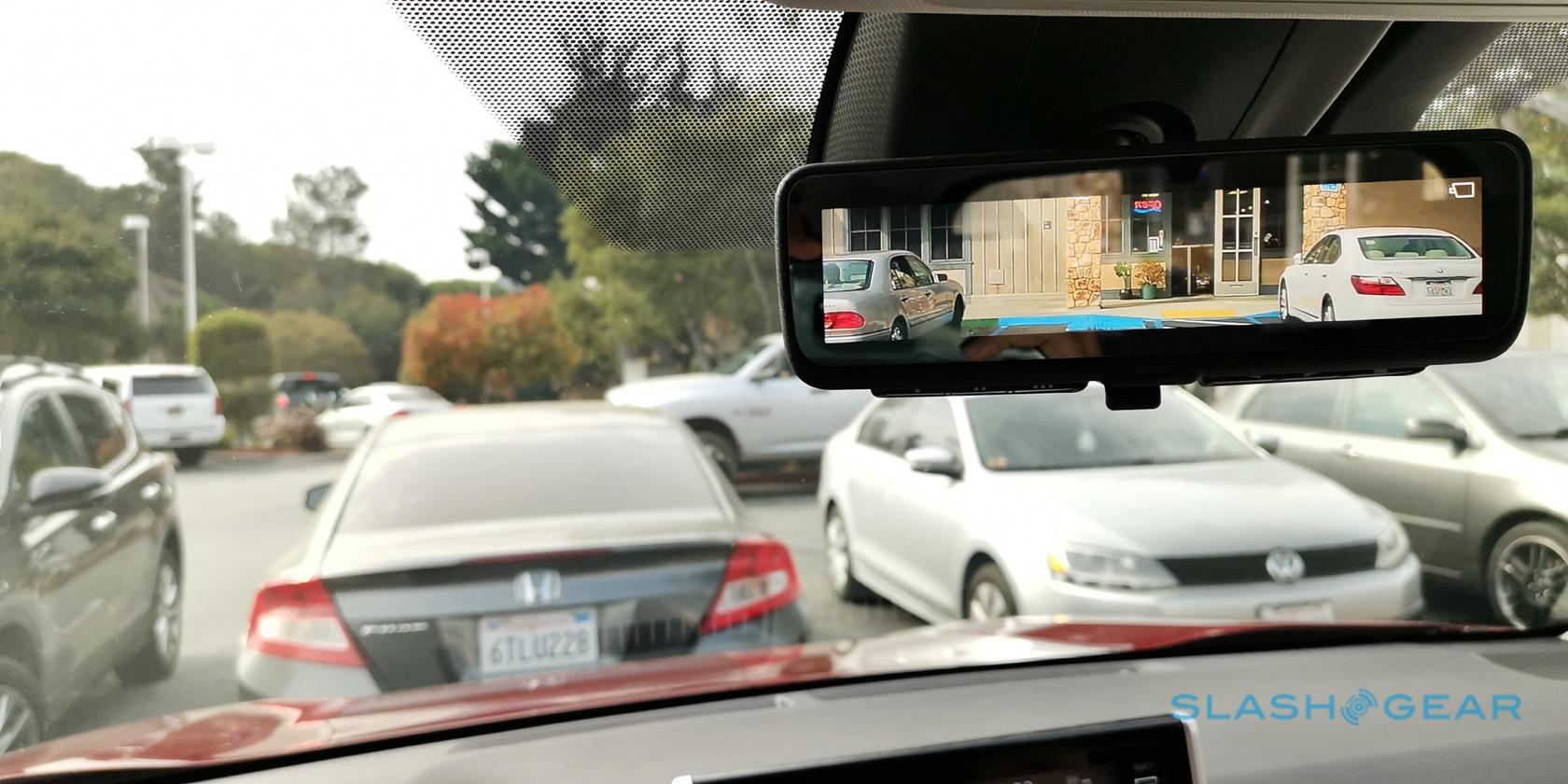 Of course, the new 2019 RAV4 is also available as a hybrid, which has a rating of 41 mpg in the city and 37 mpg highway. If I was in the market for the new RAV4, this is the one I’d get. The 2.5-liter engine in the RAV4 HV is an Atkinson cycle mill with a higher 14:1 compression ratio. Together with the sealed nickel-metal hydride battery and electric motor, the new RAV4 hybrid has a combined output of 219 horsepower.

The electric motors also provide additional low-end torque earlier in the band, and the boost in power is most welcome, particularly if you have an full complement of passengers and their luggage. Sadly you’ll have to wait for a couple more months to get your hands on the new RAV4 HV. It’ll lag behind the gasoline model in availability, with sales of the non-hybrid starting mid-November. 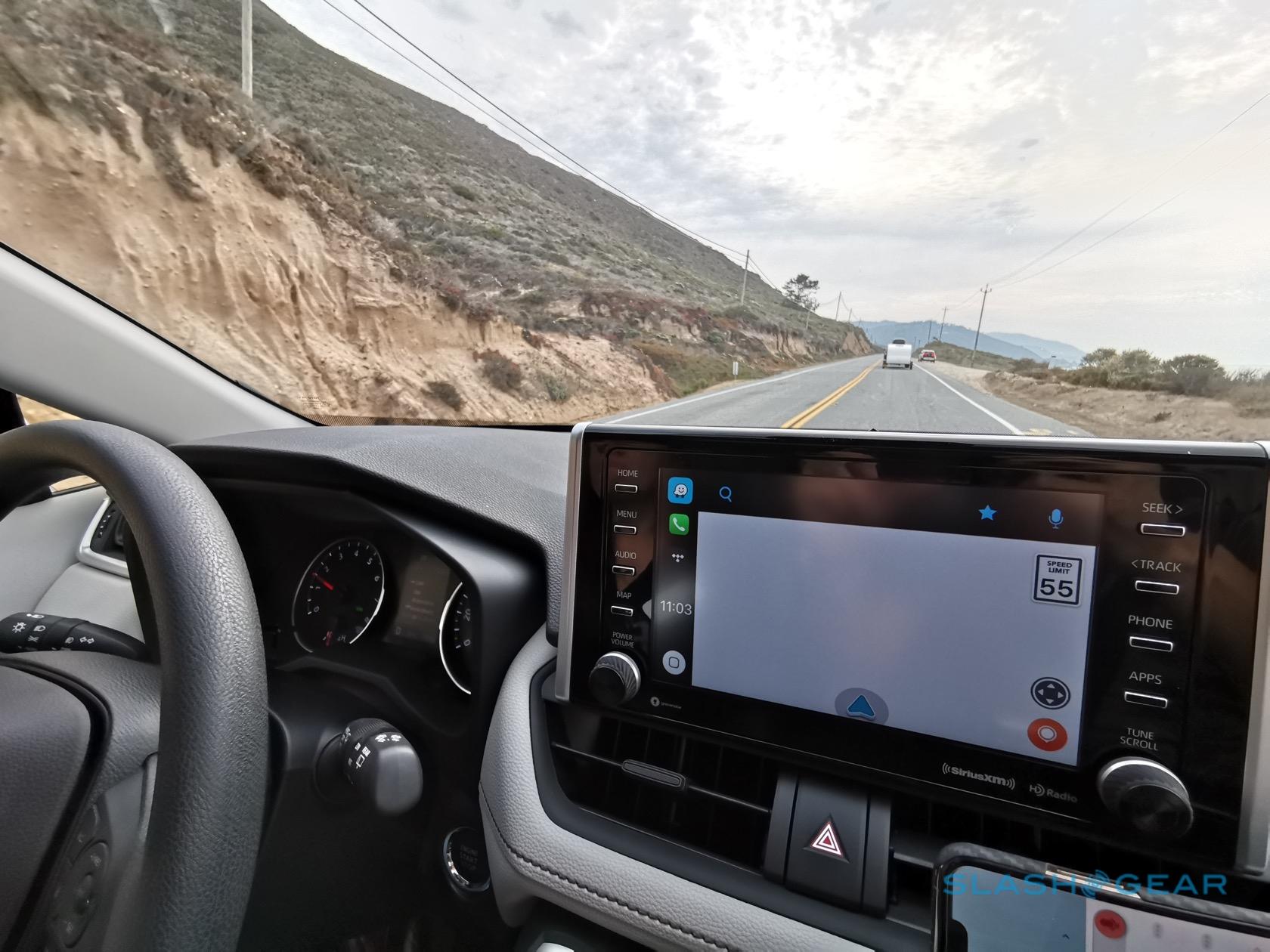 For a compact SUV, I was impressed with how well the RAV4 handled tight turns on and off the road. Steering felt great and connected, while the suspension does a good job smoothing out the bumps on the road as well as allowing you to push a little more aggressively around tighter turns.

The on- and off-road prowess of the new RAV4 can be attributed to the new TNGA-K platform. One of its most significant benefits has been allowing engineers to lower the placement of the powertrain, with the result being that the SUV’s center of gravity is lower, too. Just as is the case with lightweight sports cars and performance vehicles, having a lower CG benefits not only the handling but the ride comfort and stability as well. Even the fuel tank in the new RAV4 was not spared from a major redesign. It now uses a saddle-style design that distributes the weight of the fuel evenly from side-to-side, unlike the previous generations of the RAV4 which had their fuel tank biased to one side of the vehicle.

That attention to detail continues inside. One of the biggest changes to the new RAV4 is the interior, where it feels like a huge step-up from previous models. The instrument panel has a horizontal layout and slimmer profile, enhancing forward visibility, while the careful selection of premium interior materials adds a level of sophistication you’re not led to expect from the old SUV. 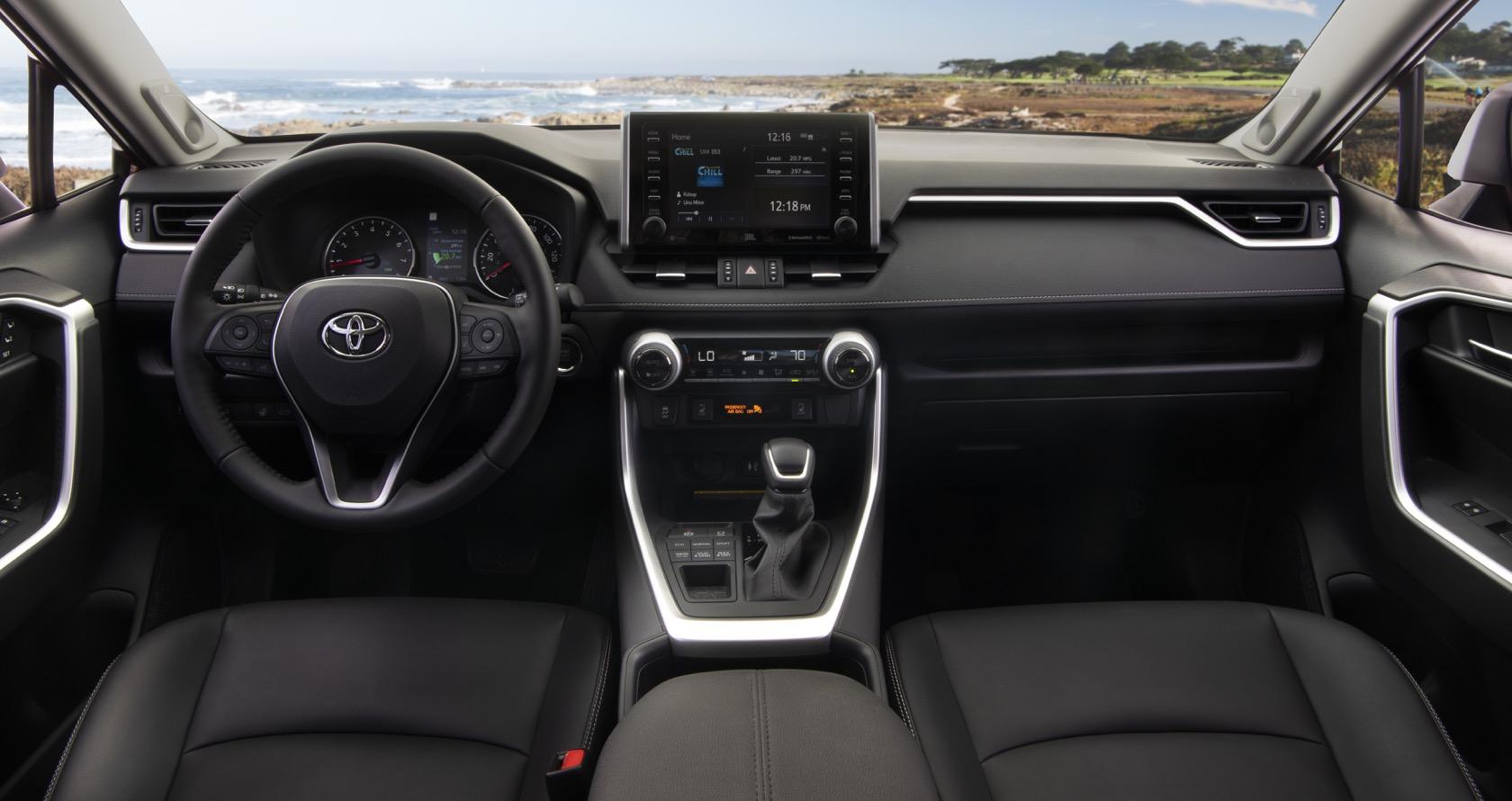 It hasn’t gone soft, mind. The upper parts of the interior are covered with solid-feeling yet refined materials to convey a sense of ruggedness and durability. There’s an abundance of soft padding on the areas occupants frequently touch. All in all it’s a careful balance of solidity and premium, adding up to a surprisingly nice place to be whether you’re cruising on the highway or crawling over a pebbly patch of rough terrain. 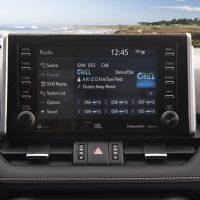 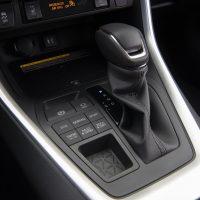 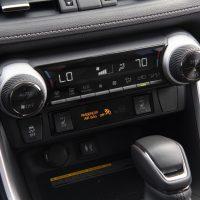 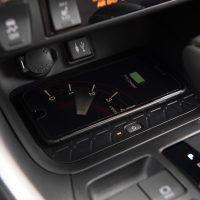 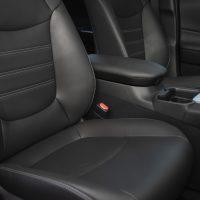 Cargo space slightly decreased in the 2019 Toyota RAV4, even though the cargo area is now 2.5-inches longer than the outgoing model. Toyota has made the best of the roughly 37 cubic feet it has to play with, however: side surfaces in the cargo area were sculpted to maximize the usage of space, for example, and there are also side pockets behind the wheel wells for added storage. Even the cargo area deck offers two height levels to accommodate taller items. Fold the rear seats and you have a nearly flat surface. 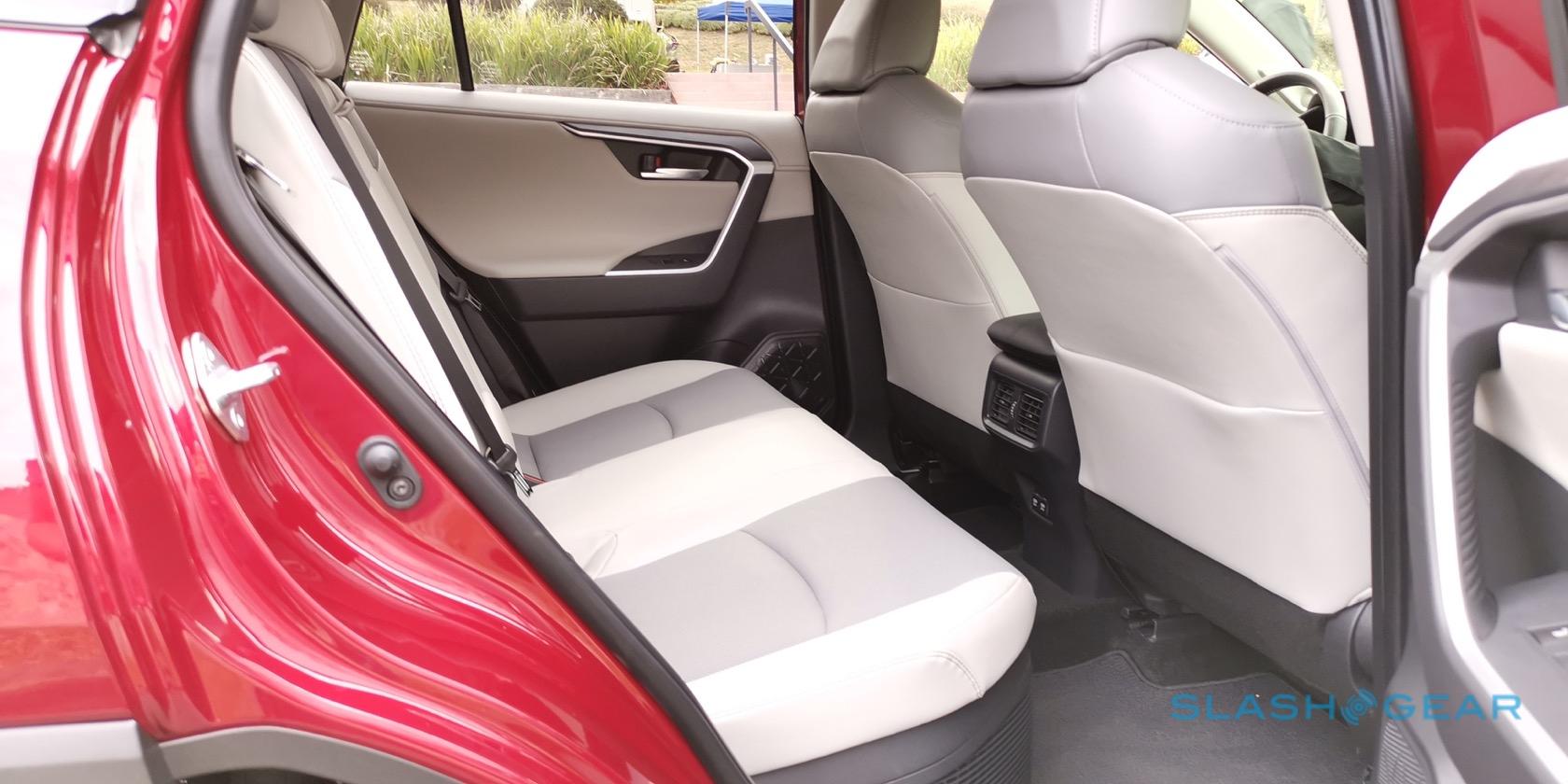 Locked into its usual position, the rear seat was more than comfortable for a compact-SUV in this category. Despite being 6’2″, I didn’t feel cramped. There was plenty of leg and head room to spread out, while my drive partner had some fun with the off-road course, not to mention places to grab onto.

The 2019 Toyota RAV4 is offered in five trim levels. The base LE comes well-equipped, with multi-LED headlights and taillights, color-keyed exterior door handles, roof rails, dual exhaust, a 4.2-inch display for the driver and a 7-inch infotainment touchscreen, and power amenities. You get Apple CarPlay support, but Android Auto is sadly absent from all RAV4 trims. Front-wheel drive is standard in this trim, which is not bad for around $25,000. 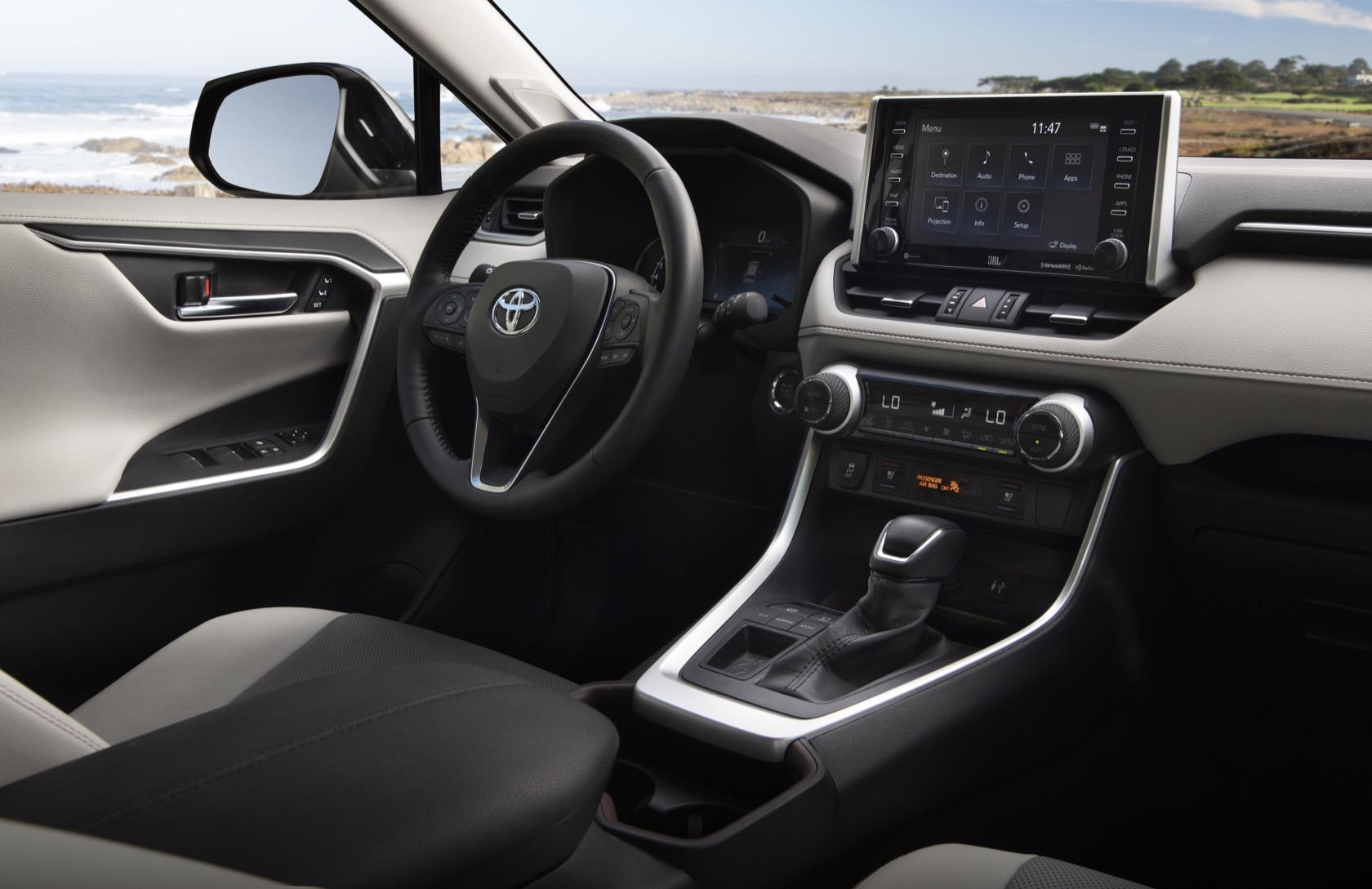 The RAV4 XLE Premium adds flashy 19-inch alloy wheels in a super-chrome finish, power driver’s seat with two-way lumbar support, leather steering wheel and shift handle, and a power liftgate. Front-wheel drive is standard in this trim level. Prices for the XLE Premium will start at around $29,500. 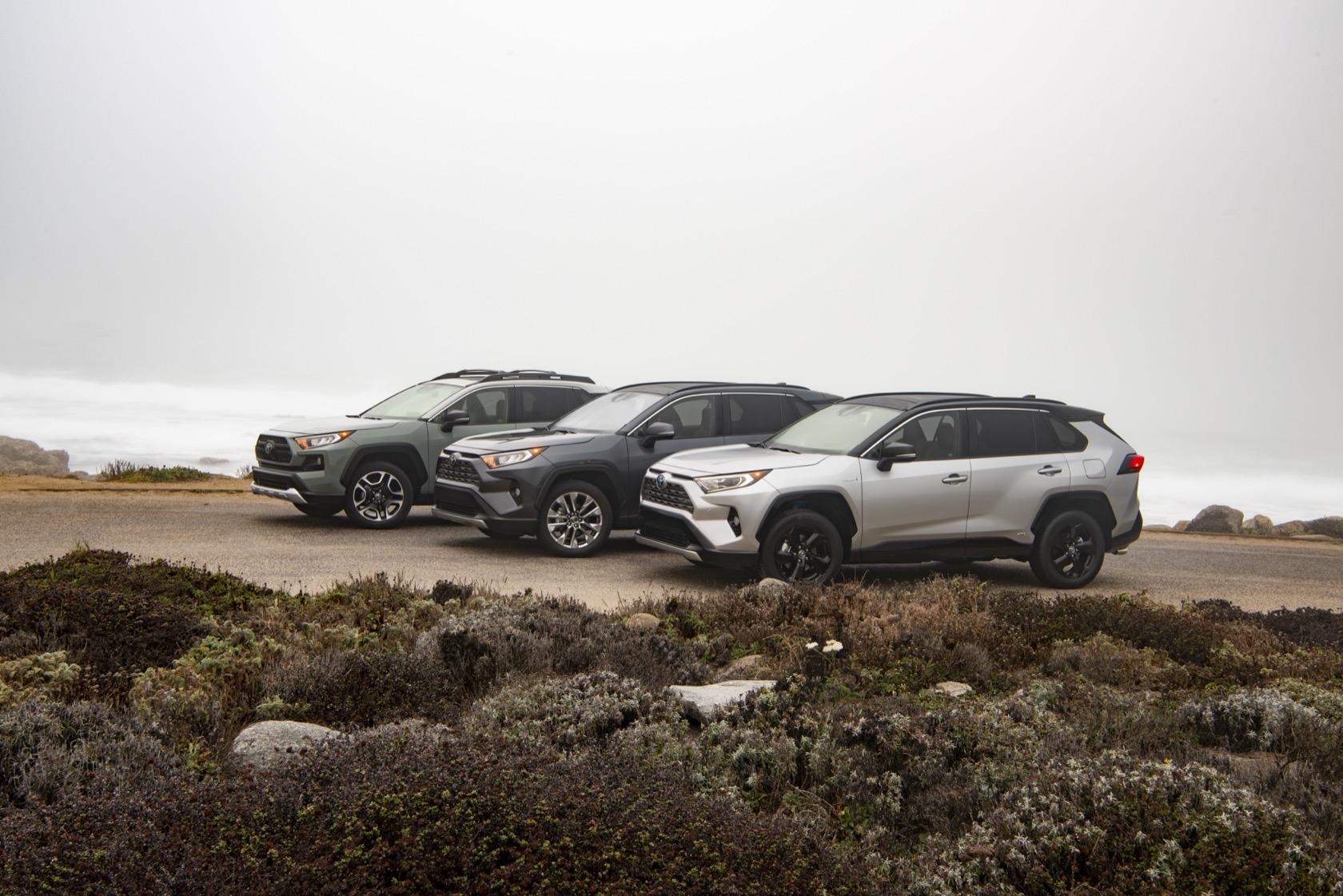 If you’re the type of person who demands to be pampered while driving a compact SUV, meanwhile, the 2019 RAV4 Limited will probably appeal more. You get silver accents on the front and rear bumpers, large black over-fenders, a gray-metallic grille, chrome accents on the exterior, and 19-inch alloy wheels. Inside, there’s a new 7-inch infotainment display, a power liftgate, and the Entune Premium Audio with Dynamic Navigation system. The RAV4 Limited with all-wheel drive starts at $34,900. 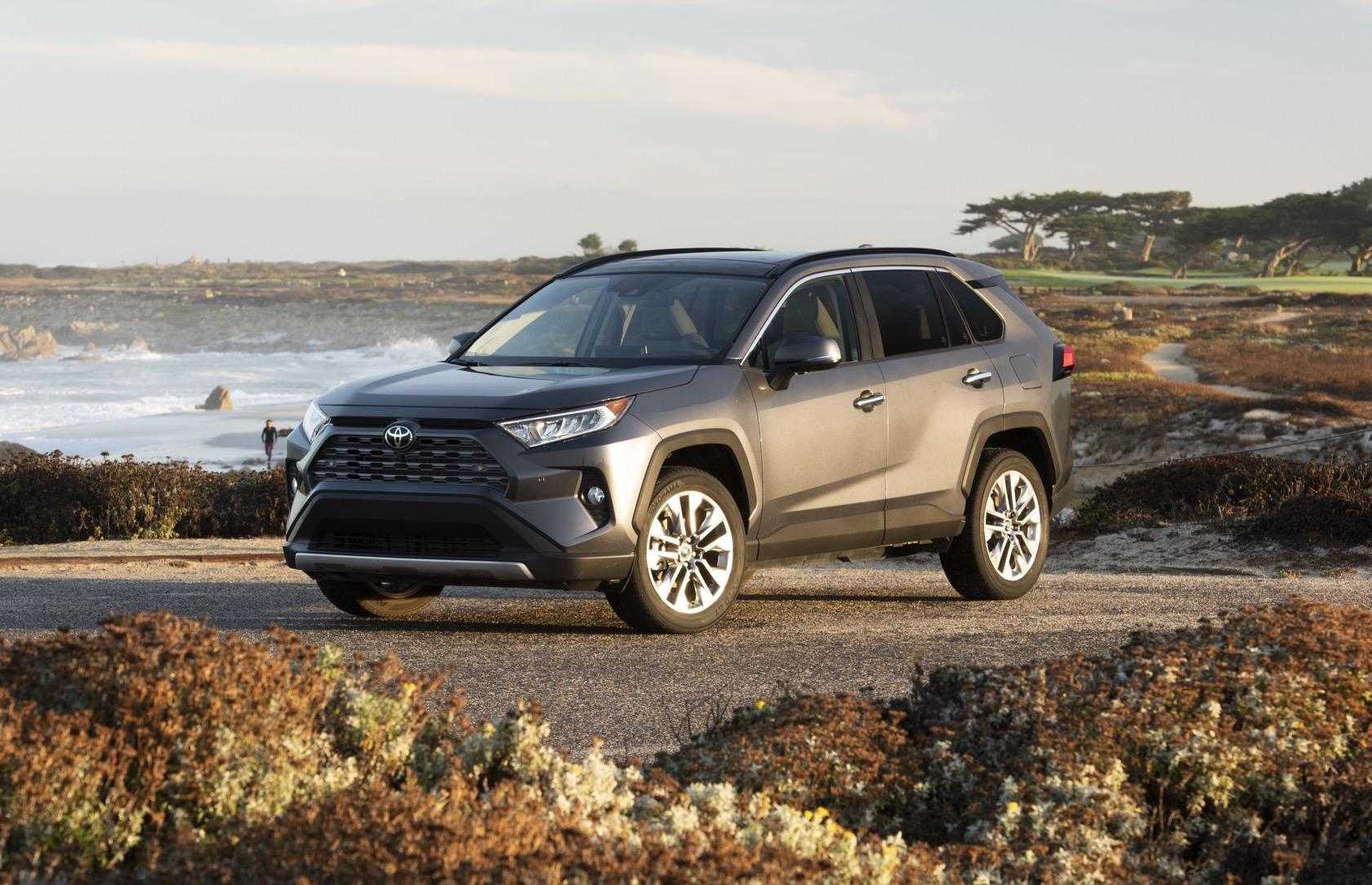 All trim models of the Toyota RAV4 can be specified in front-wheel drive and all-wheel drive. The all-wheel-drive models in the Adventure and Limited trim comes standard with Toyota’s Dynamic Torque Vectoring All-Wheel Drive with Rear Driveline Disconnect. The new system can basically direct up to 50-percent of torque to the rear wheels and distribute the torque to either the left or right rear wheel. This will further improve traction, grip, and handling on all types of pavements.

If AWD is not required, though, the system can flip to front-wheel drive mode by disconnecting the rear-axle. The entire operation is seamless. It utilizes a bevy of ratchet-type dog clutches to stop the rotation of the rear-axle driveshaft. It’s still early days so the dependability on the system in everyday driving is still unknown, but in theory it allows you to have the best of both worlds: surefooted traction over rough terrain and better fuel economy on the highway. It seems the new Toyota RAV4 really is the evolution of the compact SUV. 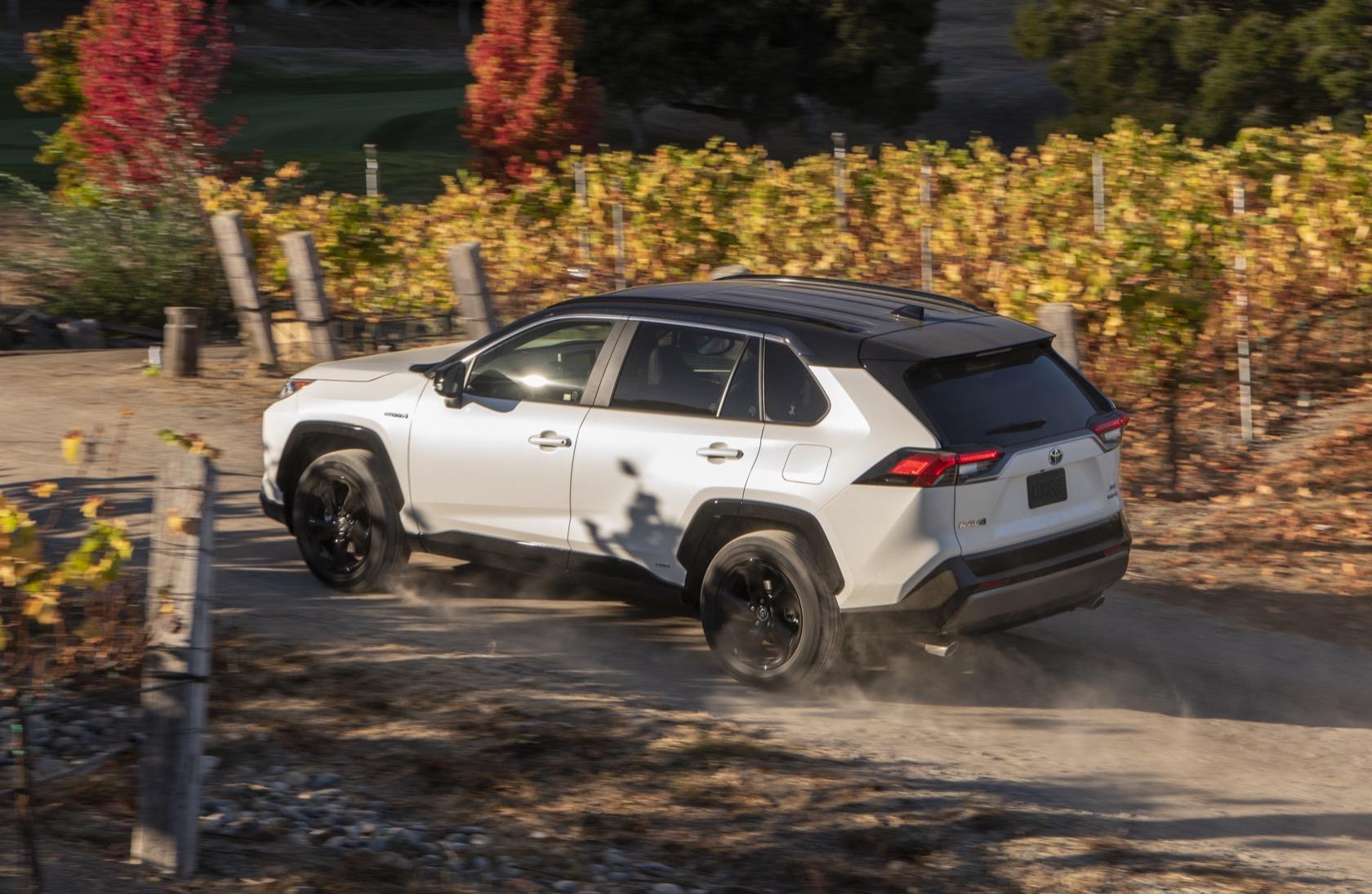 Also standard on all AWD models of the 2019 Toyota RAV4 is the Multi-Terrain Select system. It is pretty similar to the Terrain Response System in the new Range Rover. But, unlike the Range Rover which starts at around $88k, the new RAV4 can be configured to drive better over mud, snow, dirt, and rocks for no more than $40k.

The specs and the features speak for themselves. The defining factor in the new 2019 Toyota RAV4 is the interior comfort and refinement. In the upper trims, Toyota has managed to infuse Lexus-like levels of silence and refinement in the new RAV4; I’ve no doubt that it’s one of the most comfortable compact SUVs for the price conscious buyer on the market today. Yes, the new high-strength TNGA-K platform with its extra stiffness can be credited for that, but it’s also about Toyota sweating the small stuff. The automaker even went as far as employing a select group of takumi – highly-trained craftsmen – to focus solely on the NVH (noise, vibration, and harshness) tuning of the SUV. 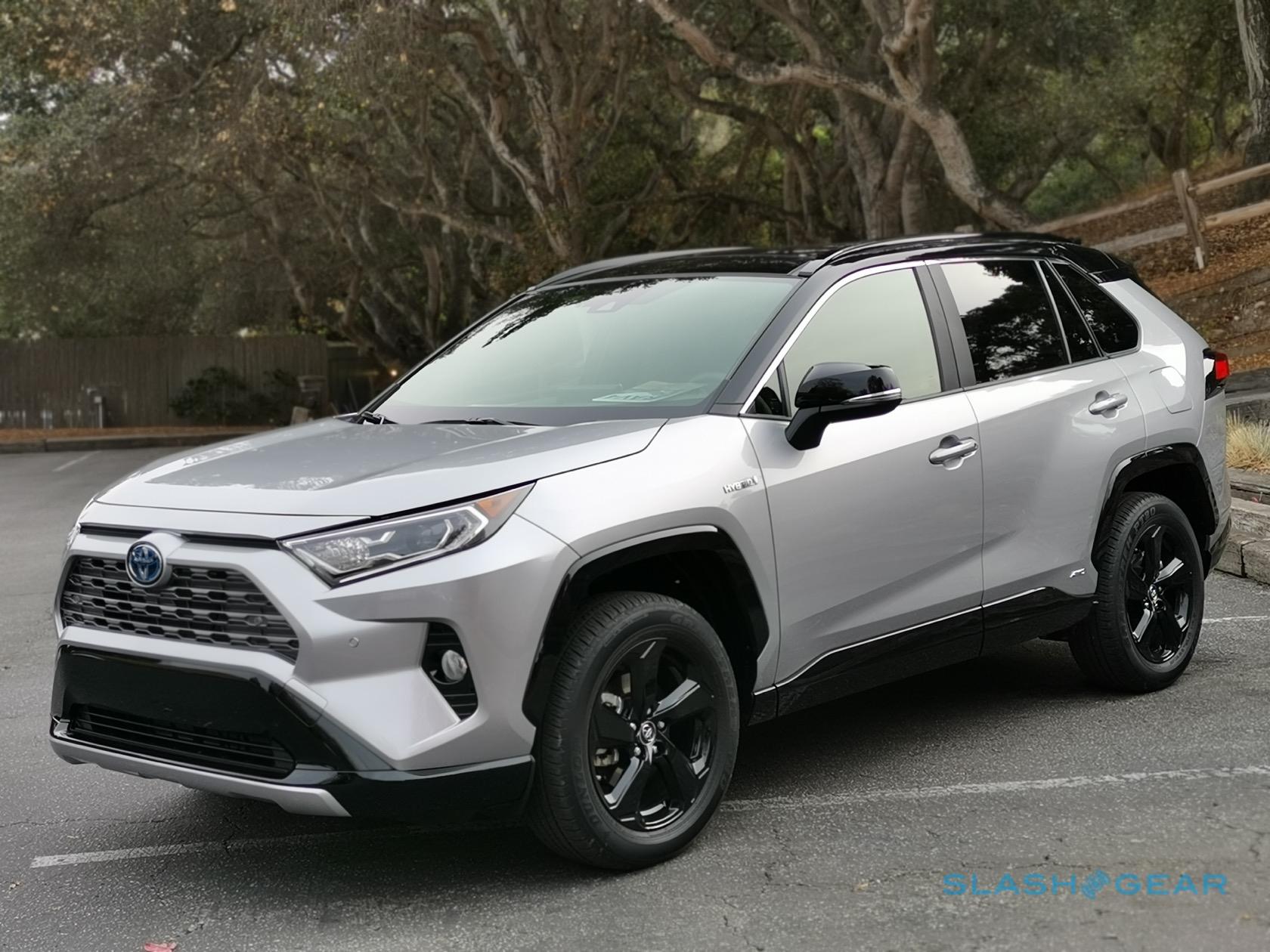 All-in-all, the new 2019 Toyota RAV4 resembles a smaller and well-dressed 4Runner, with more capability when the terrain gets rough while providing a smooth ride for hauling the kids to school and or making a quick trip to the grocery store. Aggressive pricing, a tempting hybrid option, and the good looks to stand out whether you’re in the city or the suburbs add up to an all-round great choice.