The Cayenne E-Hybrid is positioned between the newly redesigned Cayenne S and the Cayenne S for 2019. In southern France, I had the opportunity to test out Porsche’s sharp end of the sword against competitors: a “sporty” and “luxury” variant based on options and I’m here to report back that the E-Hybrid is mighty-impressive.

Having a lot more goodness, meaning that there are options available as a first for any Cayenne which includes a head-up display, remote park assist, seat massagers and 22-inch wheels. Unfortunately, all four options were unavailable in both the sporty Purpurit Metallic and luxury Quarzite Grey Metallic test cars that we drove. 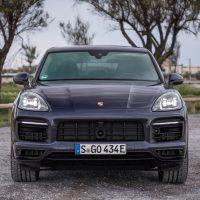 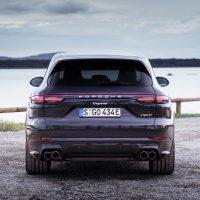 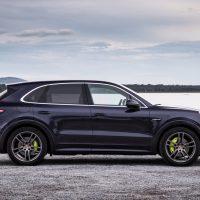 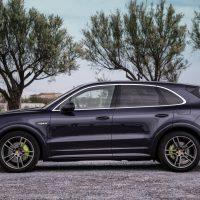 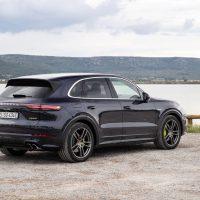 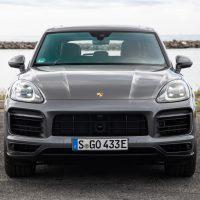 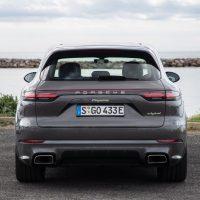 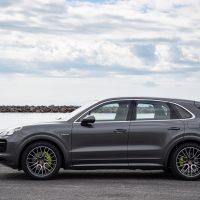 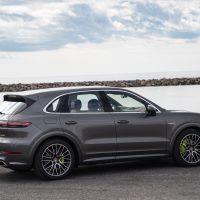 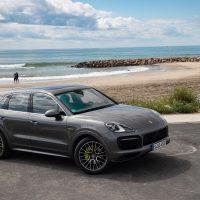 Regardless, I was here to test the newly electrified Cayenne’s engine and handling performance. So how does it fair for a 5,000-pound car? Shockingly agile… to the point where you won’t even notice the additional few hundred pounds that it gained over the Cayenne S. Part or the weight gain due in part to the 14.1 kWh battery. Our test cars came equipped with rear-axle steering so, at higher speed, it helps to virtually extend the wheelbase while shortening the wheelbase making it feels smaller than it is. 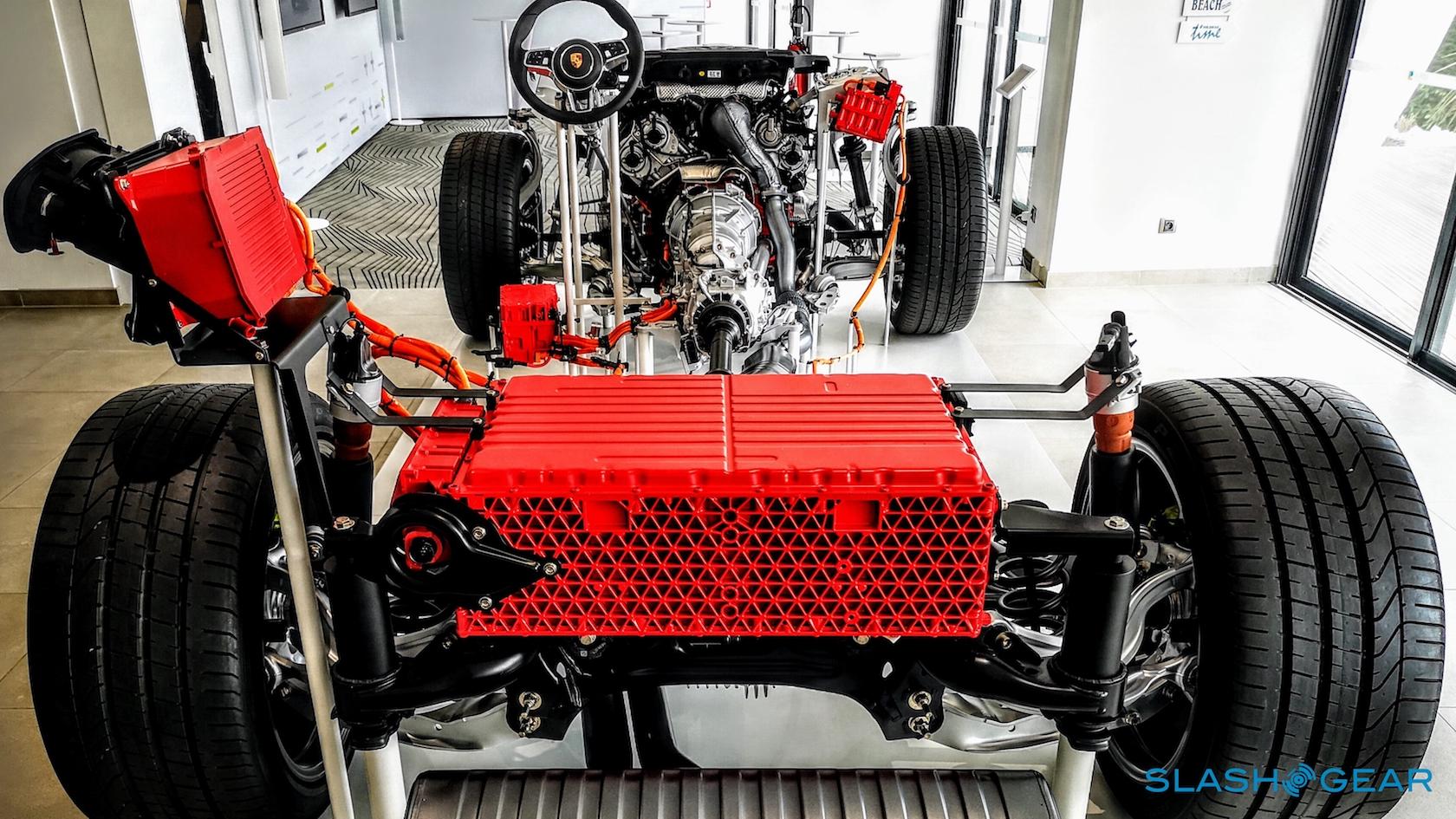 Looking at specs alone doesn’t tell the whole story about this car, I mean, horsepower, torque, 0-60 mph, they’re all just numbers until you get behind the wheel and experience the new Cayenne E-Hybrid for yourself. It’s not to say that having an overall engine output of 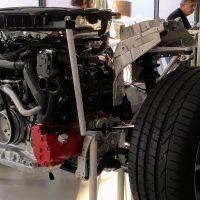 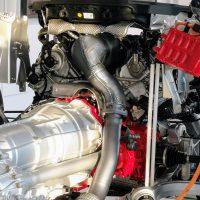 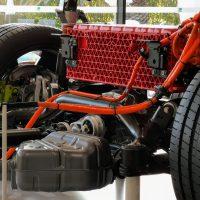 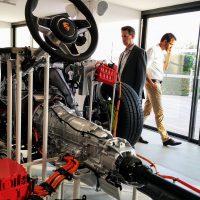 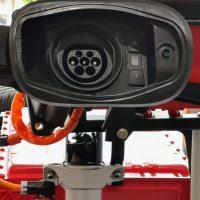 Since towing (loads up to 7,716 lbs) is potentially important for Cayenne owners, in place of PDK dual-clutch transmission, Porsche uses a newly developed eight-speed tiptronic S automatic transmission. Having driven almost everything with and without PDK, the transmission mated to an electrified 3.0-liter turbo V6 engine based on the 918 Spyder’s electric motor is nothing short of holy-shit, hold on tight because you’re about to go for the ride of your life. For an SUV-that’s a big deal. Closely mapped to the boost strategy of the 918 Spyder, the added 134 hp electric motor adds to the base Cayenne’s engine of 335 hp for a total system output of 455 hp and peak torque of 516 lb-ft.

All that torque, which is barely at the tip of idle, attributes to the quick 0-60 mph acceleration of 4.7 seconds, a gain of 0.7 seconds over the outgoing model; and has a top track speed caps off at 157 mph in Sport Plus drive mode. Admittingly, the drive route was less than ideal to truly test the performance-focused Cayenne E-Hybrid, we took every opportunity presented to test out acceleration and driving dynamics. The new eight-speed transmission is lightning fast, with rapid-fire shift speed and smoothness. Also, the Cayenne E-Hybrid has an active hang-on all-wheel-drive system with an electronically regulated, map-controlled multiplate clutch. In a sense, allowing you to drive it like a sports car, thanks to a broad range of torque distribution and thanks to Porsche Traction Management (PTM) – on or off the road, you’re rewarded with consistency in agility and dynamic driving and ride handling. 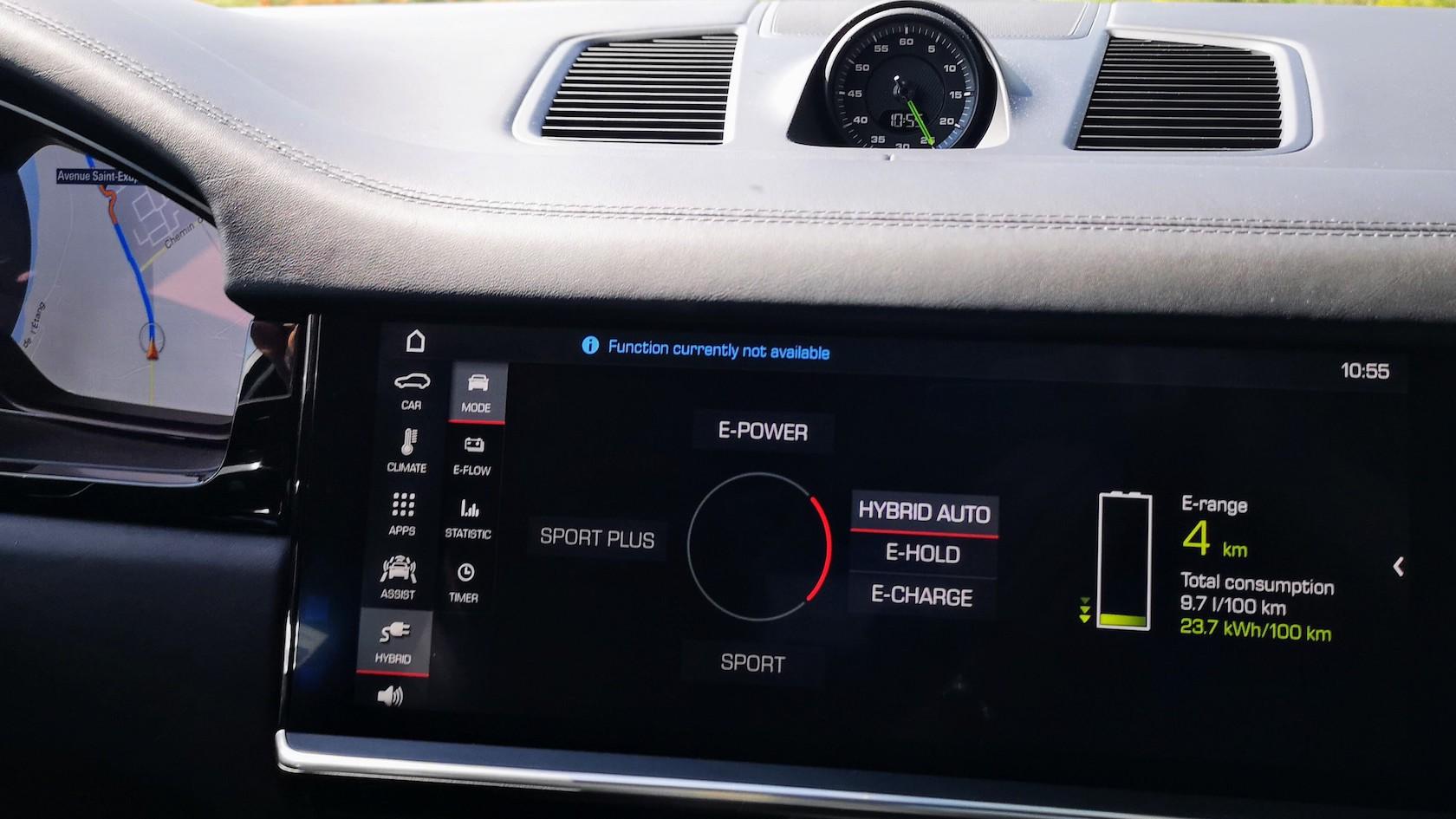 The default start mode is E-Power mode, meaning every single one of the 134 hp and 295 lb-ft from the glorious electric motor is at your disposal, up to 83 mph over a range of 44 kilometers (European standard instead of the EPA’s numbers, so expect range to drop some to ~20-25 miles). The gas pedal acts as a virtual firewall between the electric and gas engine. Pressing pass the pressure point, taps into the Cayenne E-Hybrid’s full power; which we did often. It didn’t take me long to run the battery dry, so luckily, the system automatically switches over to Hybrid Auto which, and per Porsche, the ideal combo use of the electronic and gas motor.

In terms of charging, expect to the standard 3.6-kW household charger to take 8 hours or the faster optional onboard level 2 (240-volt outlet) 7.2kW quick charger to cut the charging time down to approximately 2 hours for the 14.1-kWh lithium-ion battery pack located under trunk. 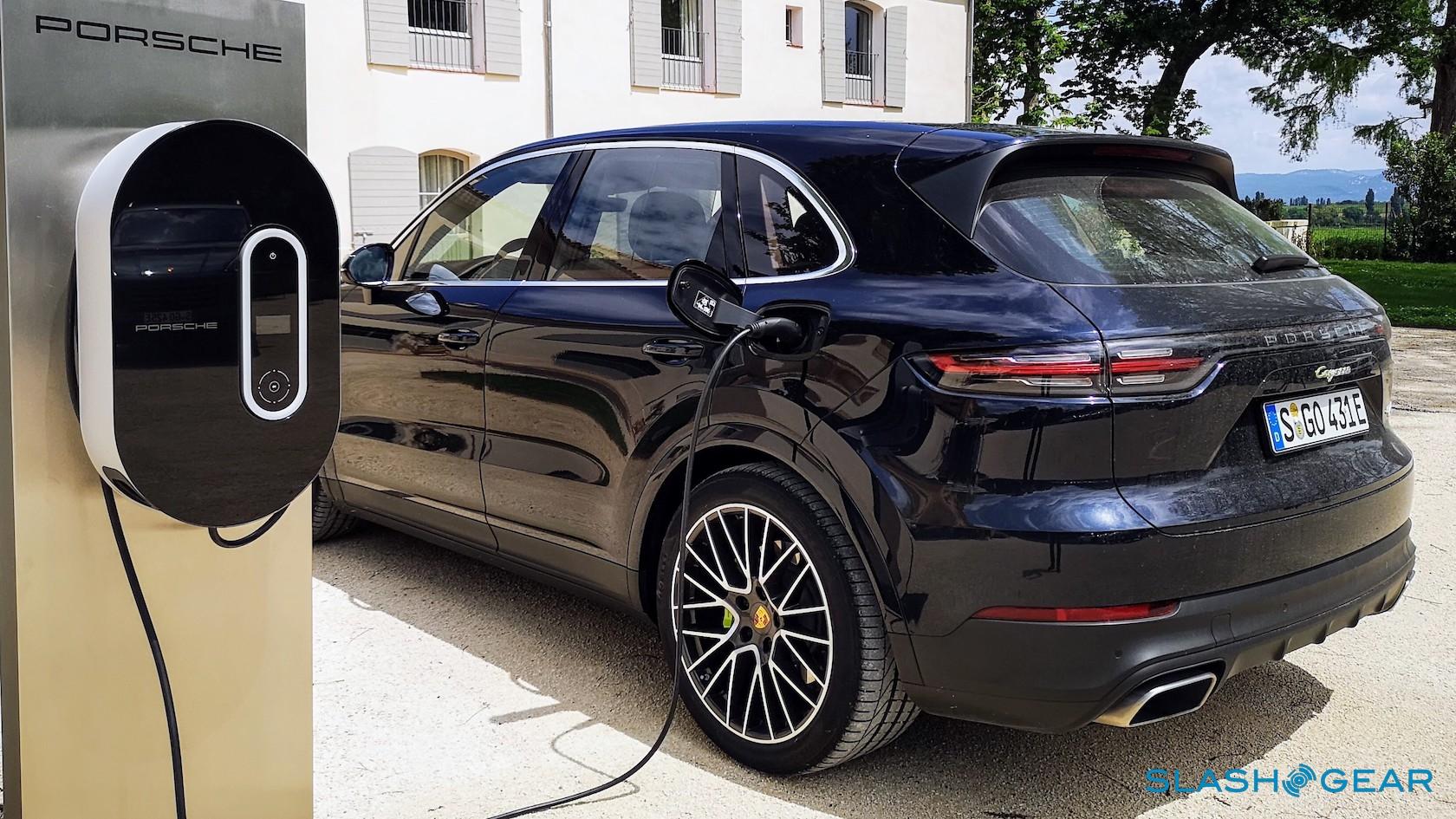 Hybrid Auto considers the driving profile, speed, how much charge is available allowing the drive control system to calculate the most optimum engine efficiency. For most, this is likely the daily driving scenario.

Performance is the name of the game here; Porsche was kind enough to make the Sport Chrono Package standard, nets you a drive mode dial on the steering wheel. That’s where all the magic happens allowing you to select between E-Power, Hybrid Auto, Sport and Sport Plus. My favorite feature is the Sport Response button, placed conveniently in the middle of the mode switch. It’s fantastic for a quick burst of performance where the Cayenne E-Hybrid miraculously switches everything to the sportiest settings possible for 20 seconds. 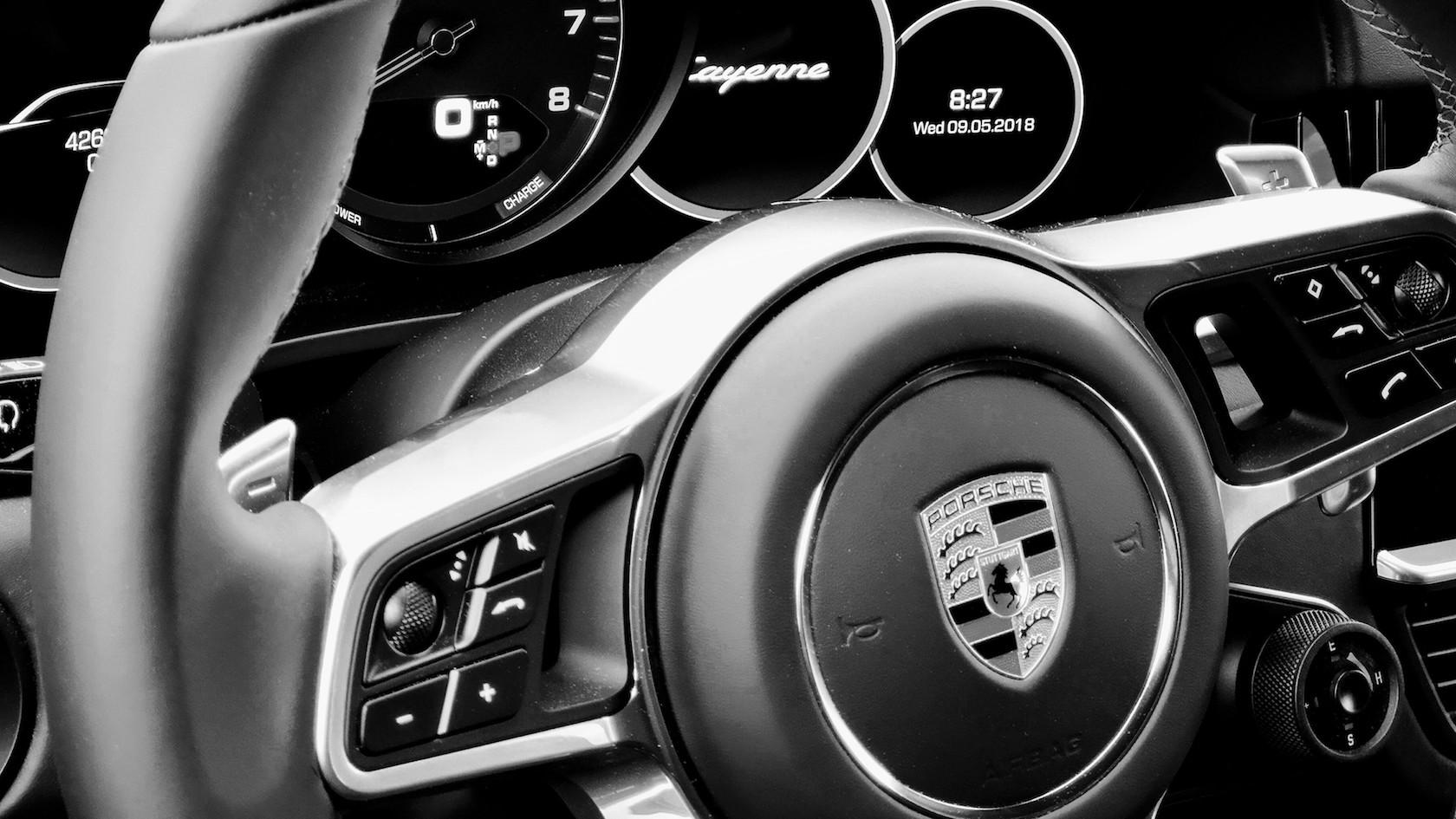 I use it often for passing tight, two-lane traffic in the middle of nowhere when cars seem to be driving well below the speed limit.

Surprisingly, switching over to Sport Plus mode, charges the battery the fastest, and as such, virtually all the battery’s energy is at your disposal – meaning that the battery is recharged in real time required for a new boost. Compared to other drive modes, the drive system only reserves a limited amount of energy for boosting, since it’s less concerned with efficiency.

Two other drive modes exclusive to the Cayenne Hybrid include E-Hold and E-Charge, which you can manually set by using the PCM’s Hybrid menu, which you can activate by clicking the button to the left of the gear shifter.

When you select E-Hold, the system locks down the battery’s current charge state, for use later. The practical use on our drive was so that, later when I hand over the car to my drive partner, he has a full charge to test out the E-Power mode or boosting. Conversely, E-Charge mode uses the gas engine to charge up the battery.

Speaking of battery, there’s 30 percent more energy over the outgoing model while maintaining the same size and weight.

While these options are nice, and we switched back and forth between them, I don’t see owners mucking with them on daily commutes.

Internally, taking on more design cues from the 918 Spyder, the Cayenne E-Hybrid also inherited the hybrid-specific displays which I find pretty and informative to look at the current energy flow, consumption values, and remaining electric range. 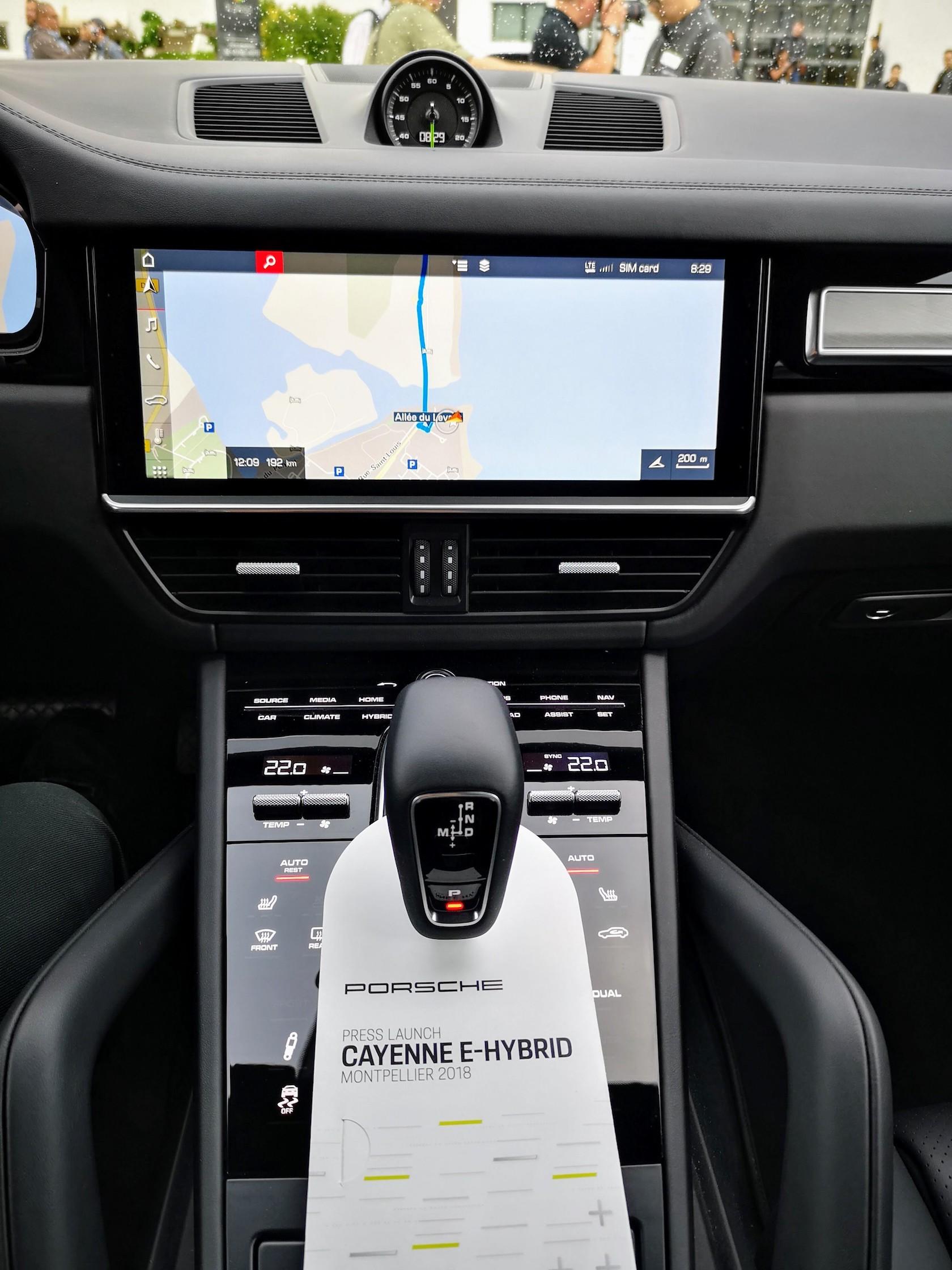 Gone are all the busy looking tactile buttons on the center console. Things are overly simplified, and while the tech inside me likes and appreciate what Porsche has done, it does require looking down while you hunt for the switches. I’d imagine that after a while, you’d remember what each “virtual” touch-sensitive controls are for so the hunting and pecking should go away.

Impressively, a few firsts for the Cayenne E-Hybrid also include optional four-zone automatic climate control as well as rear seat ventilation! For those such as myself living in Phoenix where the summer heat far exceeds 115-degrees F, this is a blessing for rear seat passengers. 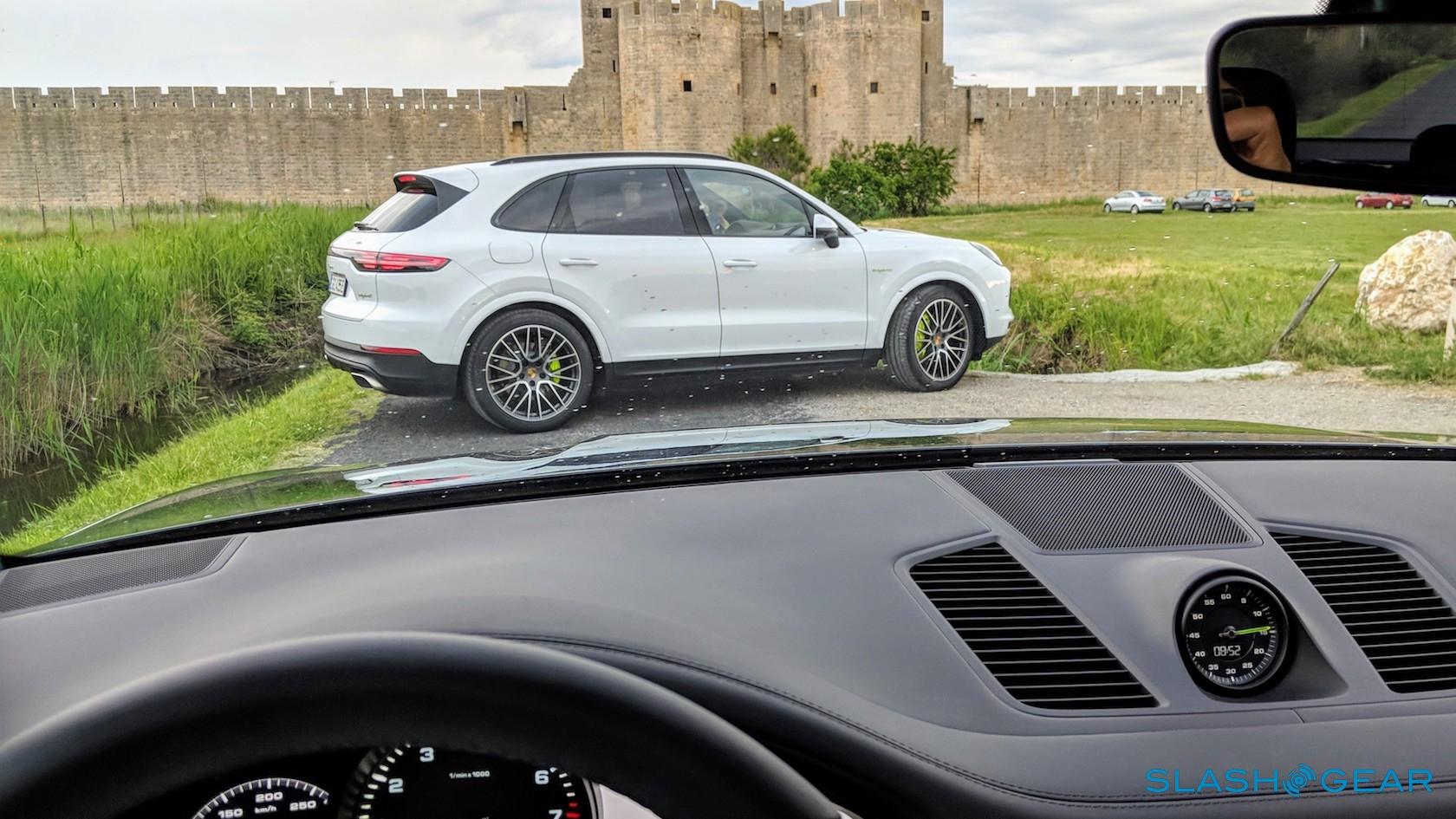 New for the third-generation Cayenne takes on a lower and wider stance while inheriting design elements from the Panamera, massaging away the SUV-bulkiness. I like how Porsche added the light strip in the tail lamps, sort of resembling a grin- from ear to ear. 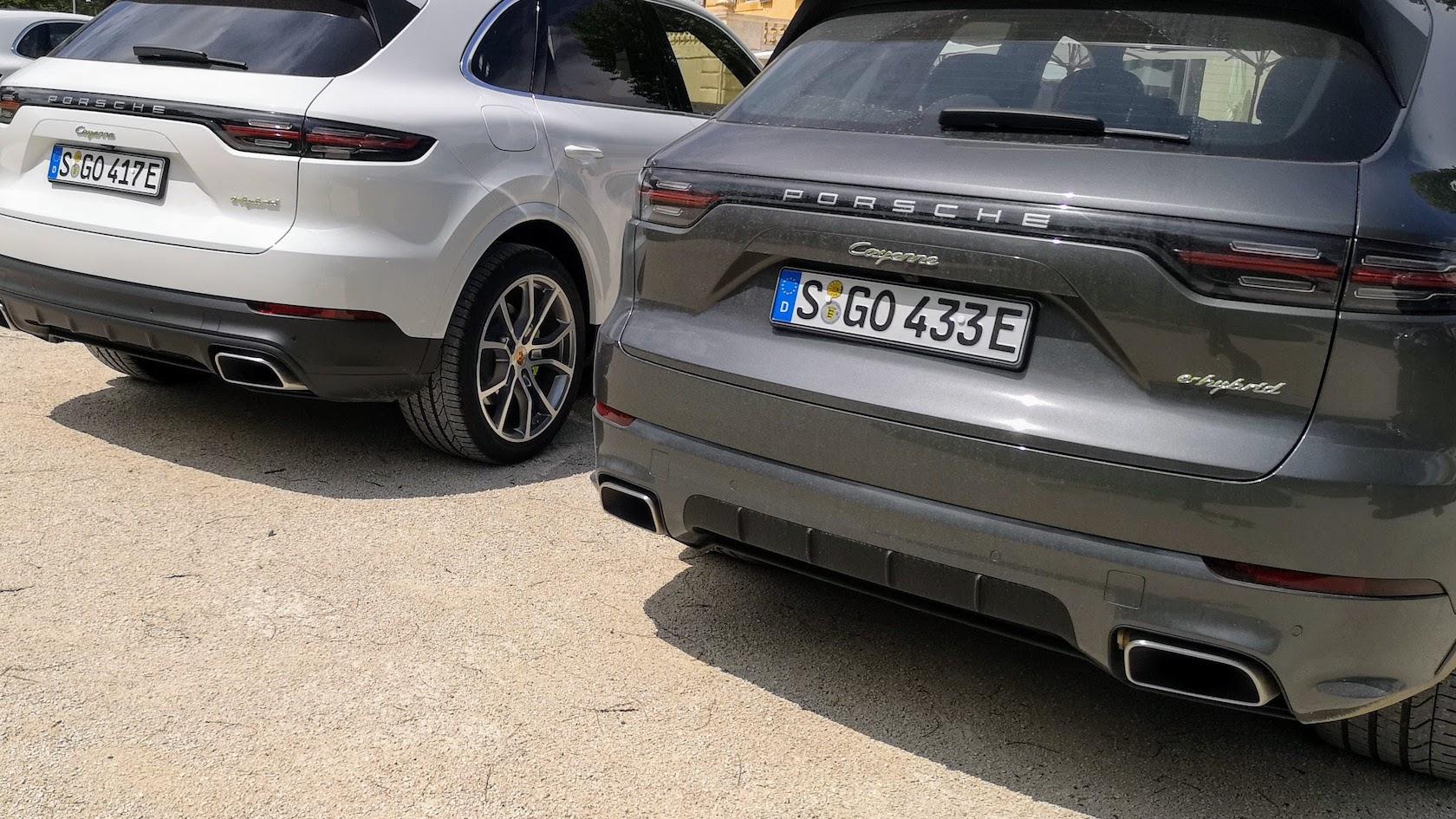 You sit higher up-as one would expect for an SUV, so visibility is good but for areas harder to see, that’s where the 360-degree camera kicks in to help with parking or for the first time on the Cayenne, you can use your smartphone via Porsche’s app, to remote park or pull it out of a tight space. 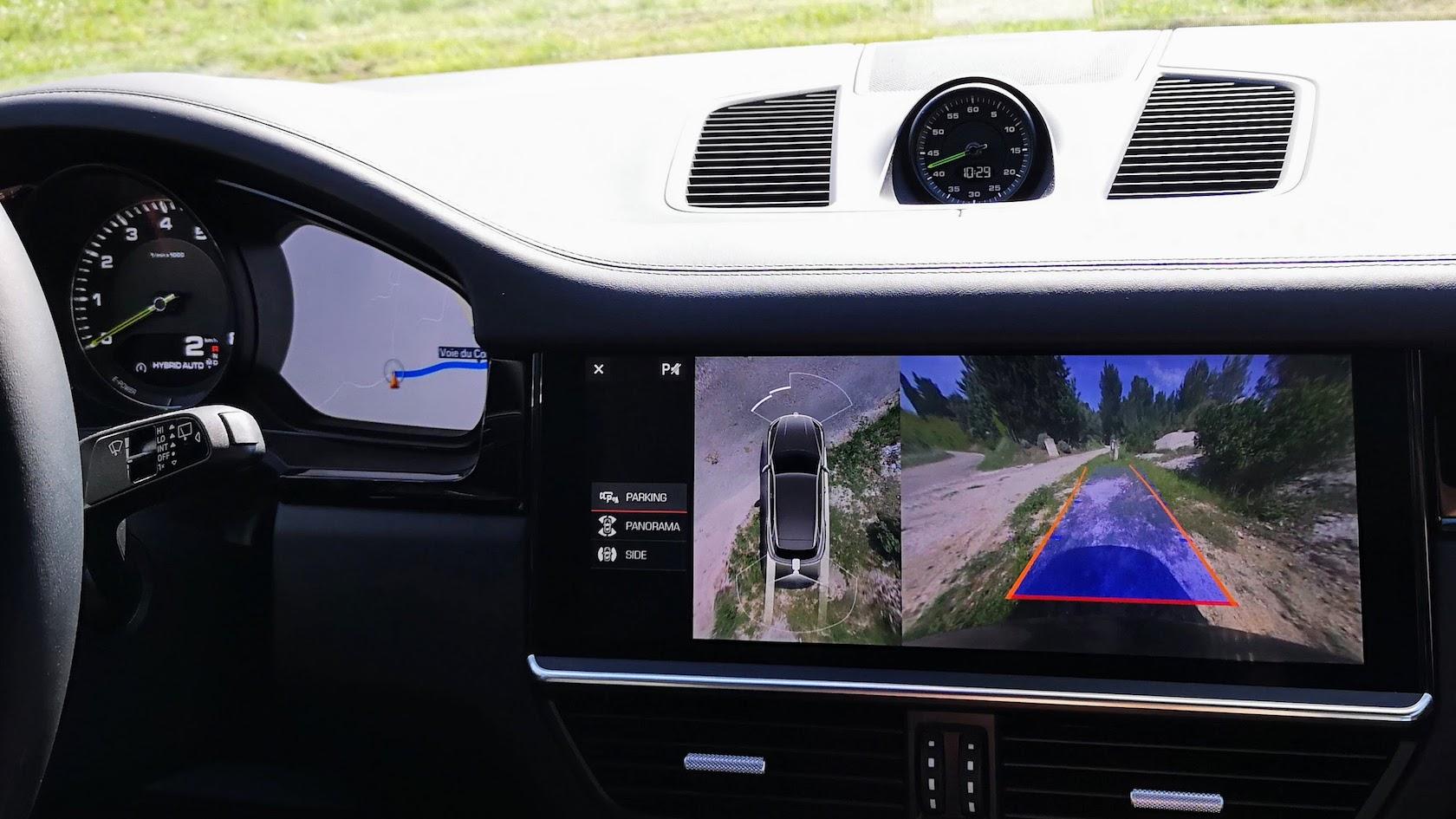 For those in the market for a sporty-hybrid SUV with a focus on performance, whether it’s Porsche, Audi, Mercedes-Benz, Jaguar, or BMW, the Cayenne E-Hybrid should be the first car you test drive. There’s finally parity between what you get for a starting price of $79,900 before the $1050 destination charge. You get a lot of bang for your buck, and more importantly with that price point, in my opinion, the best of all worlds in terms of performance between the base model Cayenne S ($65,700) and the Cayenne Turbo ($124,00). 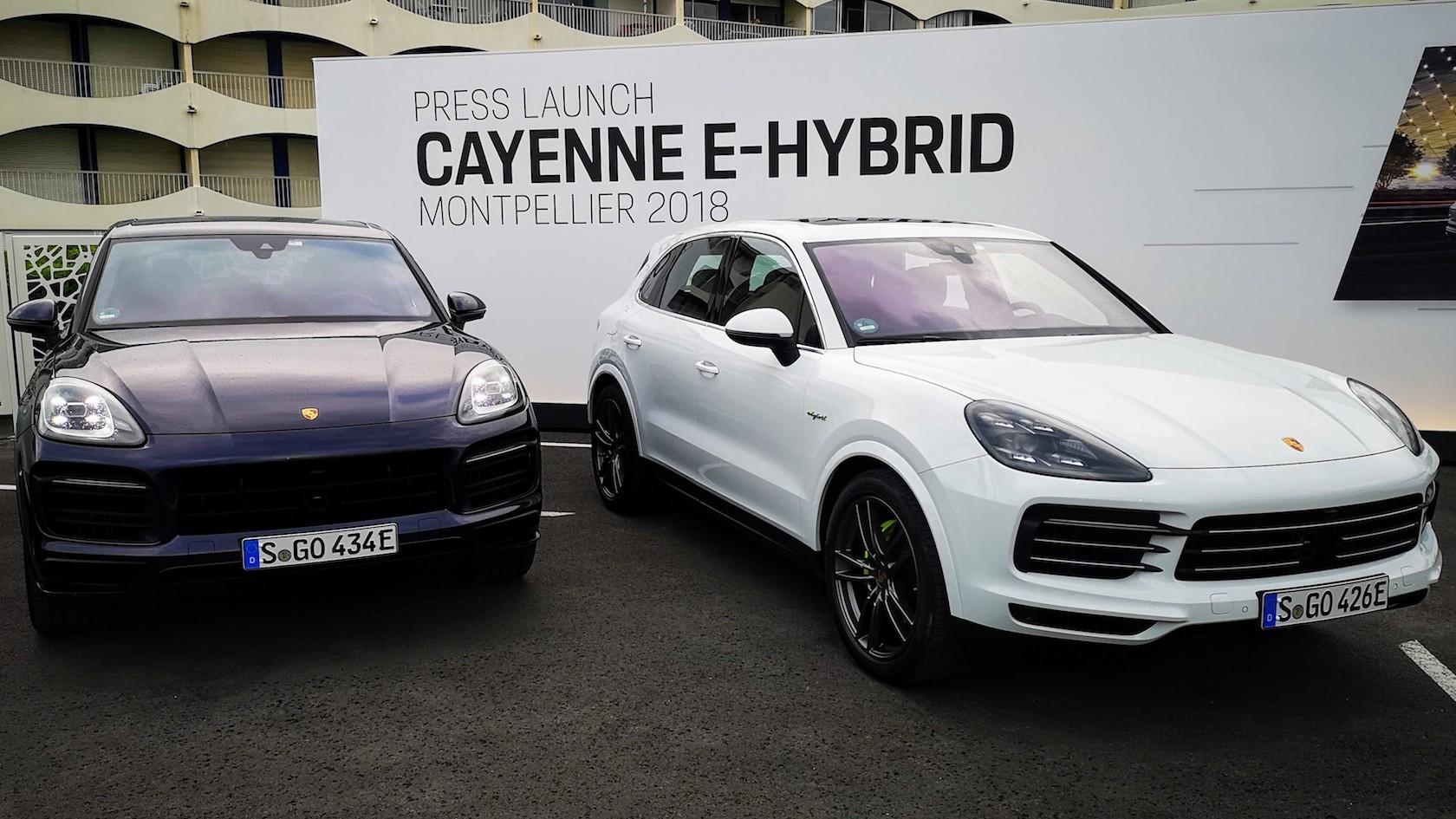