Hyundai has priced up the 2019 Kona Electric, its all-new compact crossover EV, and it looks set to throw the rest of the electric car space into disarray. Announced alongside the regular Kona, which is already on sale in the US with a gas engine, the Kona Electric is capable of up to 258 miles of zero-emission driving.

Early driving impressions of the 2019 Kona Electric have been mighty positive, with the 150 kW, 201 horsepower electric drivetrain proving to be both capable and perky. What we’ve been waiting for, though, has been pricing. Hyundai promised a competitive sticker for the EV, and it wasn’t joking around.

There’ll be three trim options, with the most affordable of the trio being the 2019 Kona Electric SEL. That will start at $36,450 (plus $1,045 destination) and include EV fast charging as standard. Other standard equipment in the SEL trim will be brake regeneration control paddles, blind-spot collision warnings, forward collision-avoidance assist, and lane keeping assist.

There’ll also be a reversing camera, keyless entry with push-button start, and a 7-inch touchscreen infotainment system with Android Auto, Apple CarPlay, SiriusXM, and Bluetooth. A leather-wrapped steering wheel will be accompanied by cloth seats; the driver’s seat is 6-way adjustable, and both front seats have heating. Single-zone climate control – with a driver-only mode to save power – will be included, too, while outside there’ll be 17-inch alloy wheels. 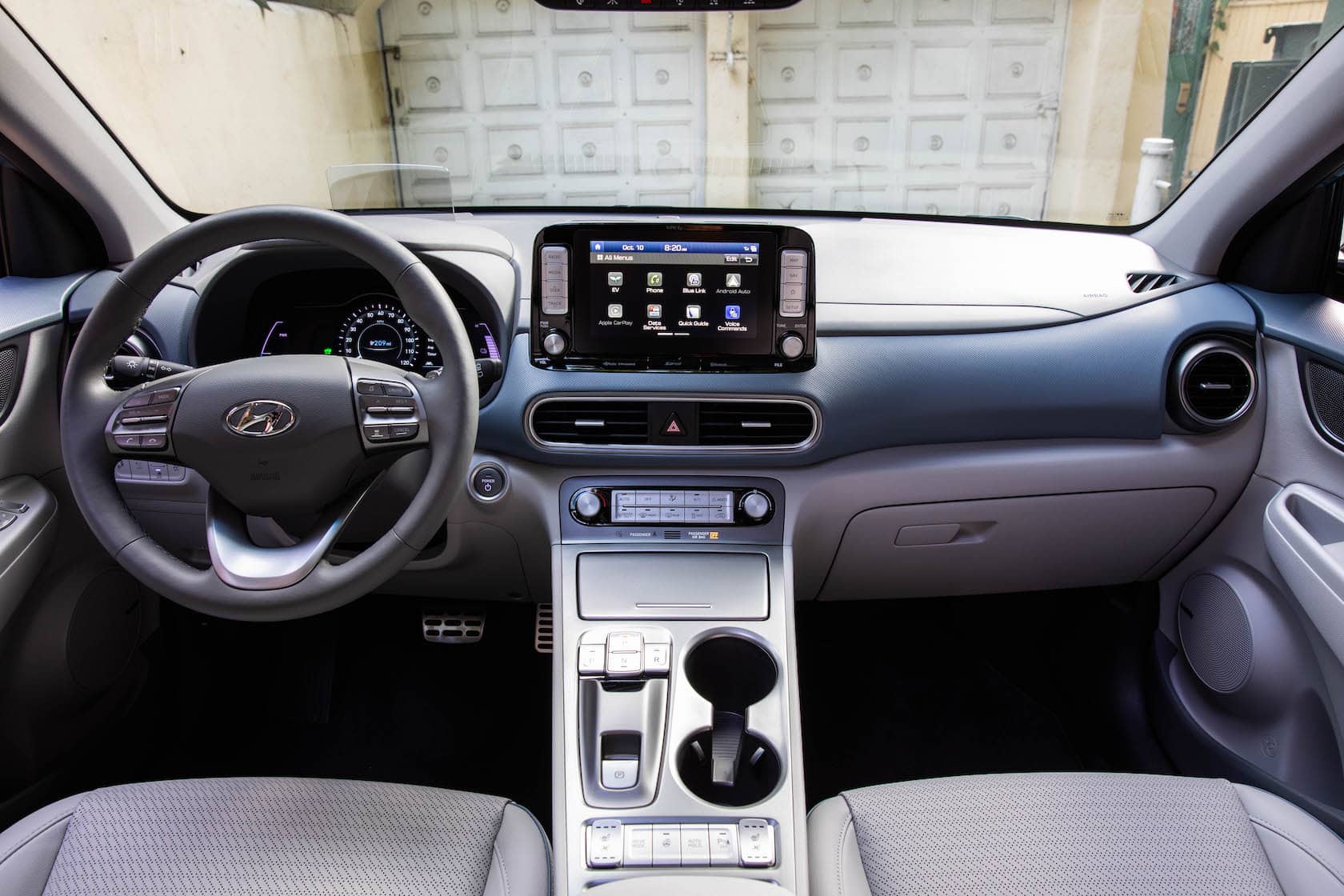 Next up, meanwhile, is the 2019 Kona Electric Limited. That will be priced from $41,150 (plus $1,045 destination), and include all of the standard equipment from the SEL. It will add LED headlamps, a power tilt-and-slide sunroof, and leather seating surfaces, however, along with a power driver seat with lumbar adjustment. It also gets high-beam assist, an auto-dimming inside rearview mirror, and wireless charging for your phone.

Finally, the 2019 Kona Electric Ultimate starts at $44,650 (plus $1,045 destination). It throws in rain-sensing wipers, pedestrian detection for the forward-collision assistance system, and rear parking sensors. There’ll also a heated steering wheel and ventilated front seats, plus a head-up display and a bigger, 8-inch touchscreen for the infotainment. An Infinity Premium Audio system with eight speakers is standard on the Ultimate trim, too, along with smart cruise control with stop and go.

In short, it’s three well-equipped and competitively priced variants on what’s already shaping up to be one of the most interesting EVs of 2019. Certainly, would-be buyers of the Tesla Model 3 who have been holding out for the base model might find their attention being grabbed by Hyundai’s pricing, while the Kona Electric’s crossover styling could well prove more palatable than the Bolt EV’s hatchback design.

Availability of the 2019 Kona Electric is kicking off in California initially. Hyundai says that it plans to spread sales to the “ZEV-focused states” in the western and northeastern regions of the US after that.