The battle is no longer just Camaro versus Mustang. The 2019 Camaro Turbo 1LE is the tip of a new spear for Chevrolet: an entry-level track car with a key differentiator that sets it apart from what its rivals – beyond simply Ford – are offering: it’s all under warranty, should something blow up on the track. Final pricing hasn’t been confirmed but, with a sticker expected to fall somewhere inside $30-$35k, the Camaro Turbo 1LE is on course to be appealingly affordable, too. Still, is that appealing enough to sway would-be buyers in this increasingly competitive segment?

It goes without saying that the 2019 Camaro Turbo 1LE’s arch rival is the 2019 Mustang EcoBoost. So much so, in fact, that Chevy went without saying it. Instead, it name-checked a list of rivals you might not ordinarily include in a pony car showdown. The Hyundai Veloster N, for example, along with the Ford Focus ST/RS, the Honda Civic SI/Type-R, Subaru’s BRZ tS and yes, the WRX/STI, too. Even the Kia Stinger is on the new Camaro’s agenda. 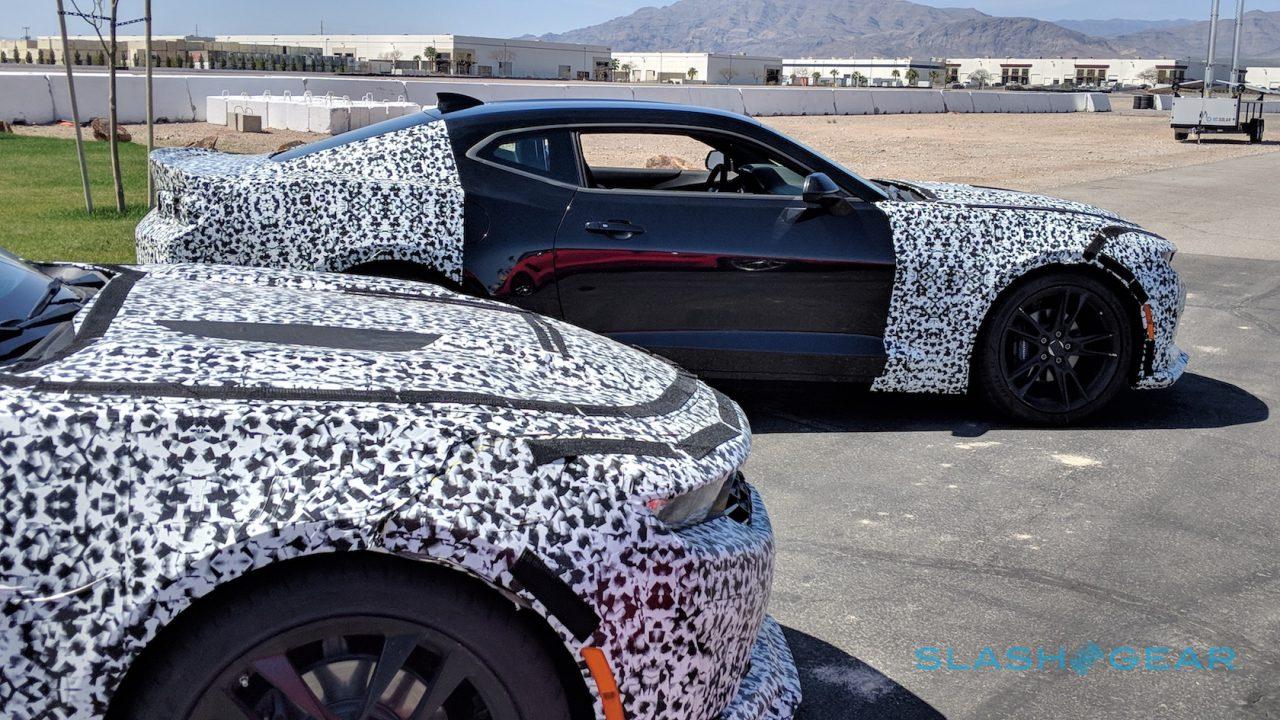 What makes the Camaro 1LE a track car? Here’s what you need to know. Chevrolet offers the 1LE performance trim on the top end Camaro ZL1, down through the SS, V6, and now the 2.0-liter turbo. It’s a set of OEM integrated performance parts, factory-fitted, and complete with a reassuring warranty. Ford was first to do this with the Mustang EcoBoost with its Performance Package, only it neglected to throw in the warranty.

The turbocharged 2.0-liter four-cylinder engine remains the same as in the standard Camaro RS, good for 275 horsepower and 295 lb-ft of torque. It’s paired with a six-speed manual transmission, and yes, that’s the only option. Ford, in contrast, will let you have a 10-speed automatic as an option.

Don’t let fact that this is the least powerful Camaro in the stable deter you. There’s an old saying in the car business: drive a fast car slow, and a slower car fast. Chevy may have only been granting us three laps in the Turbo 1LE prototype at its Las Vegas Motor Speedway “autocross,” but it was enough to impress. It’s a car you can easily throw around tight turns, even with the safety nannying switched off, and the steering is sharp and direct. While you might not have a V6 or V8 under the hood, there’s more than enough horsepower and torque to get up to decent racing speeds on the track.

The hand-me-downs help. Chevrolet has borrowed the tires and track-tuned FE3 suspension from the SS, complete with its larger front and rear anti-roll stabilizer bars. There are specially tuned dampers, cross-axis ball joints in the rear toe links, and the shocks are track-tuned for an increase in stability over the standard turbo model. Factor in stiffer rear cradle bushings, and you get near-50/50 weight distribution and around 100 pounds less overall compared to the V6. 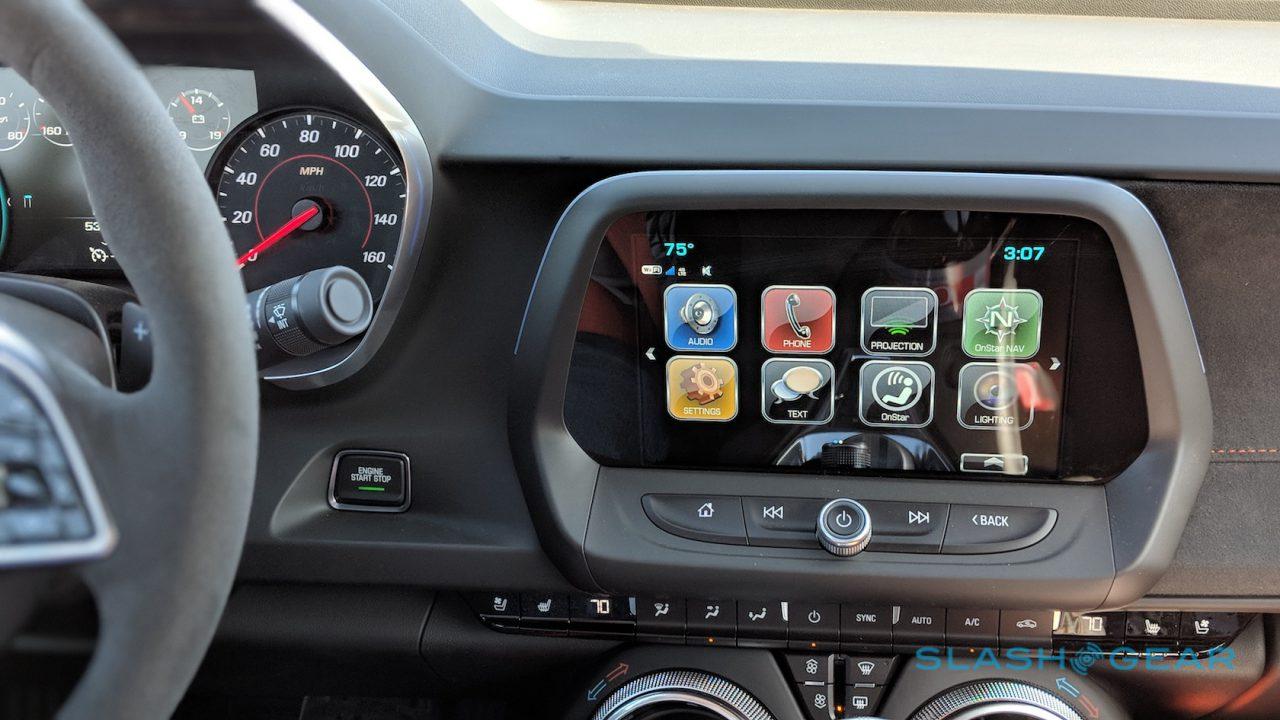 One lap down, and with only two remaining to push the 2019 Camaro Turbo 1LE as hard as possible, I switched to Competition mode. The lead car, a Corvette Gran Sports, had been taking it easy for the first lap; come the second and it sped off into the distance. Keeping up with a pro-driver in a 700+ hp Vette is a tall order, especially when you’re only playing with a fraction of the power. All you can do is push forward, and so that’s what I did.

The bigger Goodyear P245/40R20 rubber on the front and P275/35R20 on the rear work great to help with grip, especially given the technical nature of the tight turns. There’s little room for runoff, too, forcing precision or caution – or perhaps some mixture of the two – if you don’t want to leave Chevy with a dented prototype. It’s testament to the car, then, that after a couple of turns – including a long left-hander – you quickly get a sense of just what fun the new Camaro can be. 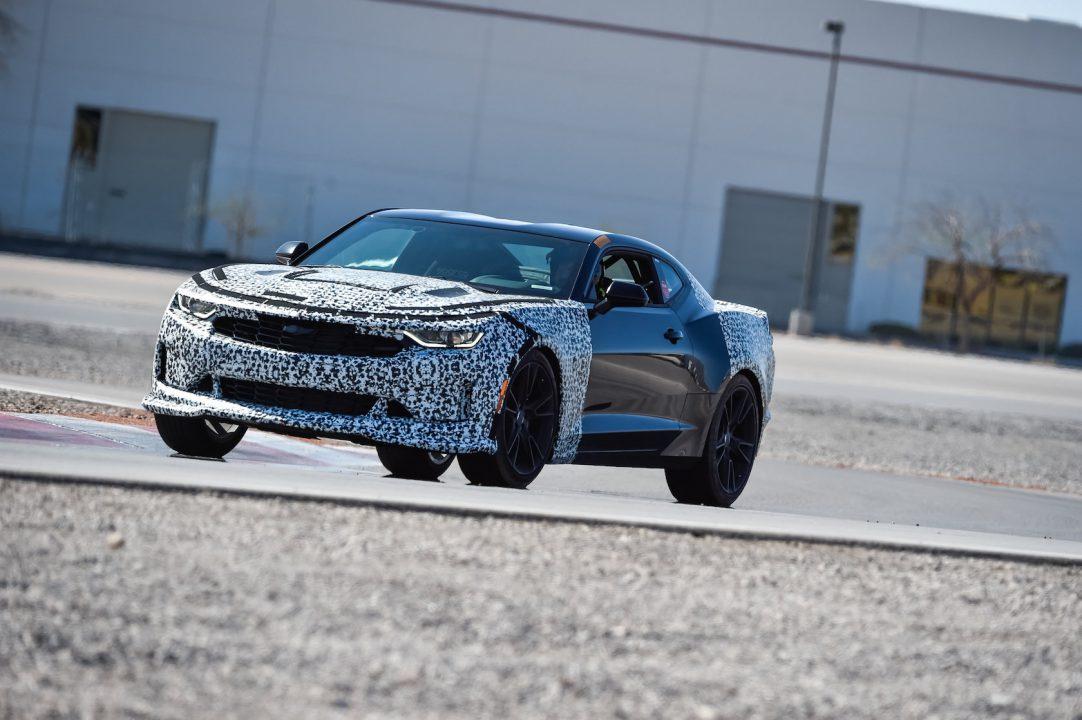 It’s eminently throwable, it turns out. Coming into the longer left-hand turn at a higher speed than I should, you really feel the stiffer chassis and overall stability of the car. The front:rear weight distribution to only leaves the Camaro feeling agile, but telegraphs when the rear is about to kick out. Better still, it’s easily corrected: a little steering in the same direction, a little more gas, and then you’re on the straight.

In Competition mode the traction control is off, and with the lower horsepower stopping you from getting into too much trouble you can really play with the car and feel safe doing it. Sure, the rear end can kick out a little, but it doesn’t break away enough to lose control.

I love the fact that buyers in this segment now have another option to consider. That being said, from the shear size of the Camaro and given the laundry list of competing cars, that big market is as much as a risk as it is an opportunity. The 2019 Camaro Turbo 1LE may look more like a “proper” sports car than a hot hatch like the Civic Type R or Focus RS, but it also means you’re dealing with its less-than-ideal visibility and relatively tight cabin, particularly when you’re squeezed into the optional Recaro seats. Chevrolet sweetens the deal with a 7-inch touchscreen infotainment system with Android Auto and Apple CarPlay as standard, but that track warranty can’t make the Camaro any more practical.

We’ll know better how it holds up when Chevrolet announces final pricing for the 2019 Camaro Turbo 1LE. That’ll be closer to its arrival in dealerships this fall.