While SUVs may seem the darlings of the automotive industry right now, there’s definitely plenty of room to innovate and wow the crowd in other segments: especially when you have a long list of new things to show off, like Audi. While the 2019 A8 represents the marque’s vision for sedans, the 2019 A7 Sportback embodies Audi’s vision for those buyers who demand a sportier sedan. The A7, however, is not one that can be confined and defined inside a rigid box. Instead, it takes inspiration from both past and present, and in the process embracing coupe, sedan, and even wagon in a single body.

Audi places heavy emphasis on the new A7 Sportback’s design over other aspects, and for good reason. Similar to the 2019 A8, the A7 takes inspiration from the Prologue concept, while, at the same time, still remaining unmistakably an A7. In fact, though the A7 and A8 may share many things in common, they offer it up in very different ways. 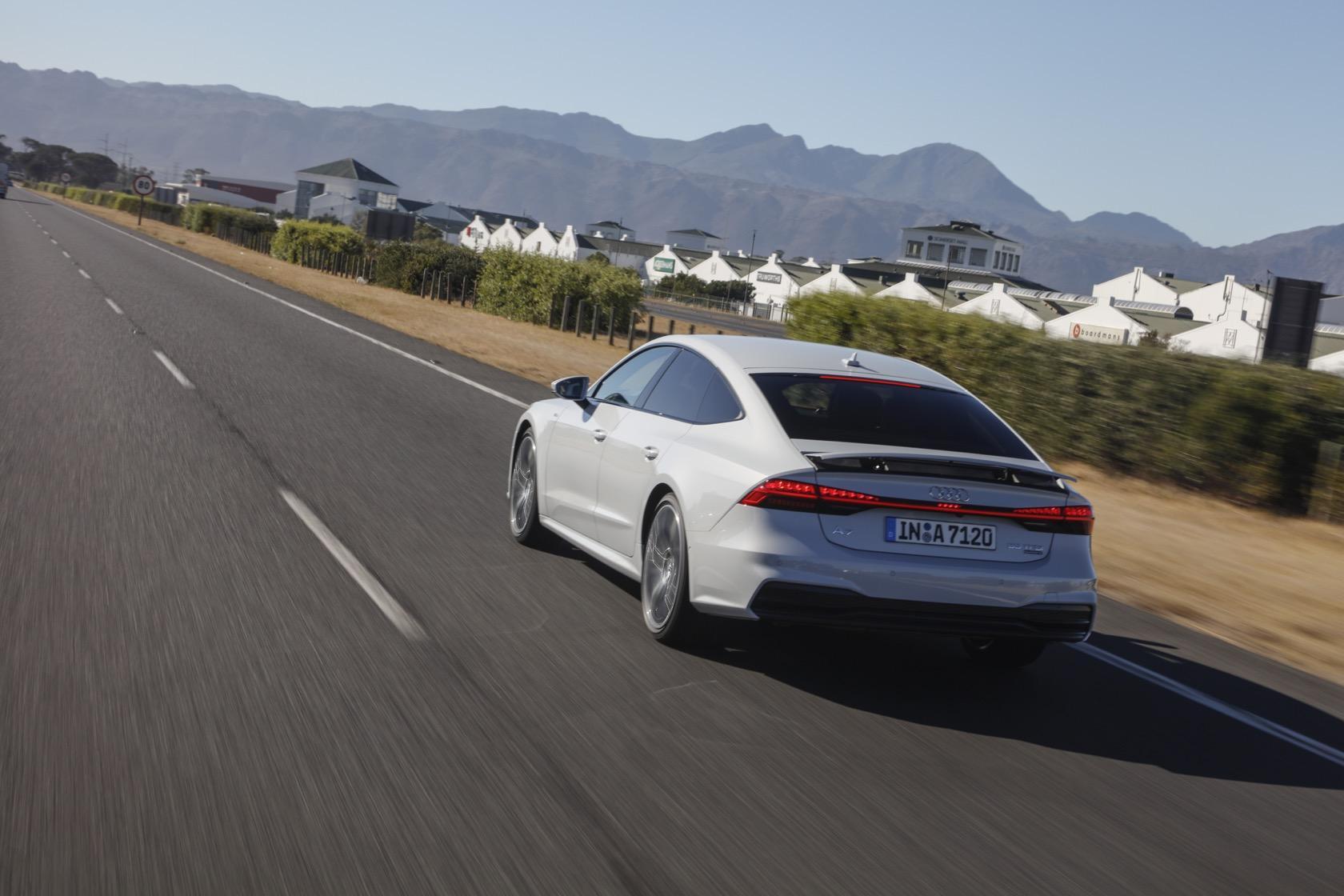 At its most straightforward, it’s about being driver-centric. Where the A8’s interior is defined by horizontal lines and an emphasized sense of space, befitting its sedan status, in the 2019 Audi A7, everything is turned toward the driver. The new Audi MMI system, functionally similar in both sedan and four-door coupe, is slanted more towards the driver in the latter. Everything is easily within reach and available at a quick and safe glance. The A7 Sportback puts the driver at the visual center of its universe.

It’s not an absolute, however. Unlike in the Audi TT, where the focus is completely on the driver, the new A7 straddles its three car lines and doesn’t ignore passengers altogether. In the real world, it makes a big difference: compared to the A8, which really feels like a car to be driven in, the A7 is a car that’s meant for you to drive yourself. During our two day drive in Cape Town, S. Africa, there was plenty of seat time both behind the wheel and as a passenger. 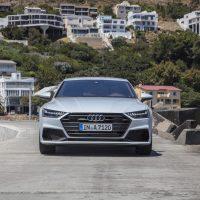 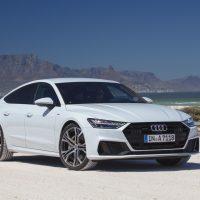 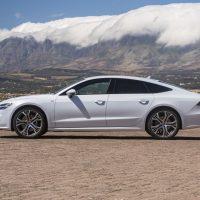 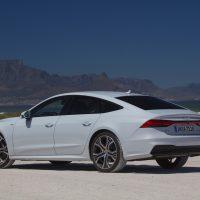 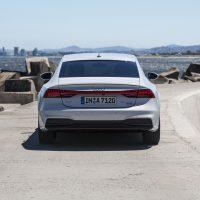 A welcome gain from the A8 is the extra space. The 0.8 inches of added length may not sound much but, combined with its 3.4-foot width, sitting comfortably inside the A7 would almost make you think you were inside the sedan instead. The lines blur even further when you see the familiar refreshed MMI system: like the 2019 A8, the new A7 Sportback is equipped with Audi’s new-generation MMI system.

Unlike previous iterations, Audi throws out the physical knobs and buttons in exchange for two fully touch-enabled screens, stacked one atop the other in the center console. What Audi hasn’t thrown out, however, is the unique MMI experience that Audi owners have grown to love. The old MMI’s audible and tactile “click” where the entire display “vibrates” is still present, an impressive feat considering the inherent limitations of touchscreen technologies. 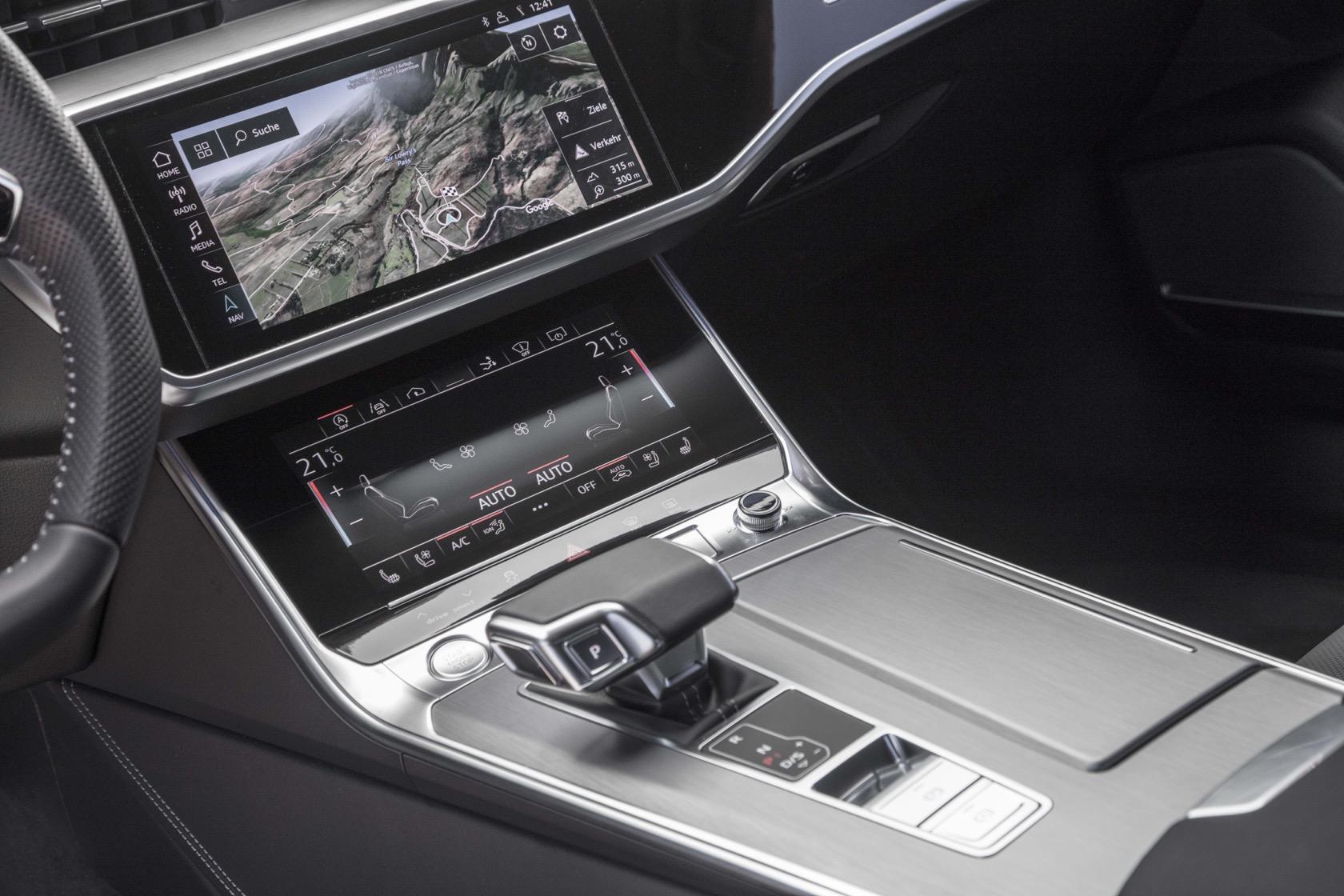 Ease and speed of use are still also there, despite the complexity of digital user interfaces. Options are laid out on a single level, minimizing the need to drill down into menus before reaching the exact feature you’re hunting for. A new 12.3-inch virtual cockpit sits directly in front of the driver, replacing the analog instrumentation of old while still giving the illusion of depth thanks to the very high-resolution and responsive screen.

From the driver’s seat, operating the dual displays settles into an up-and-down cadence, almost tai-chi like in its zen. The icons, text, and graphics are easy to read with minimal complexity, a welcome relief compared to some of the more complex systems in rival cars. 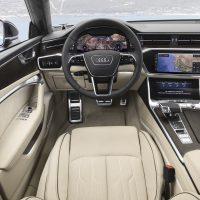 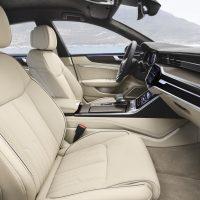 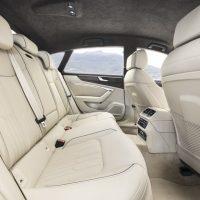 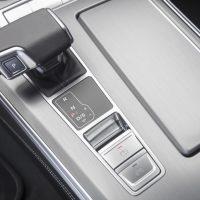 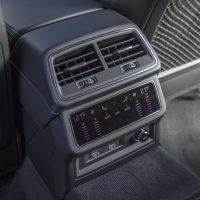 While all carmakers boast of their attention to design and to detail, the A7 feels worthy of the praise. Take, for example, the extra sensors inside the front grille, which Audi’s designers managed to integrate into the car’s core design and thus give the coupé a unique fascia. Rather than wearing its active-assistance sensors like warts, the A7 subtly hides another pair of eyes inside the new “singleframe” grille. 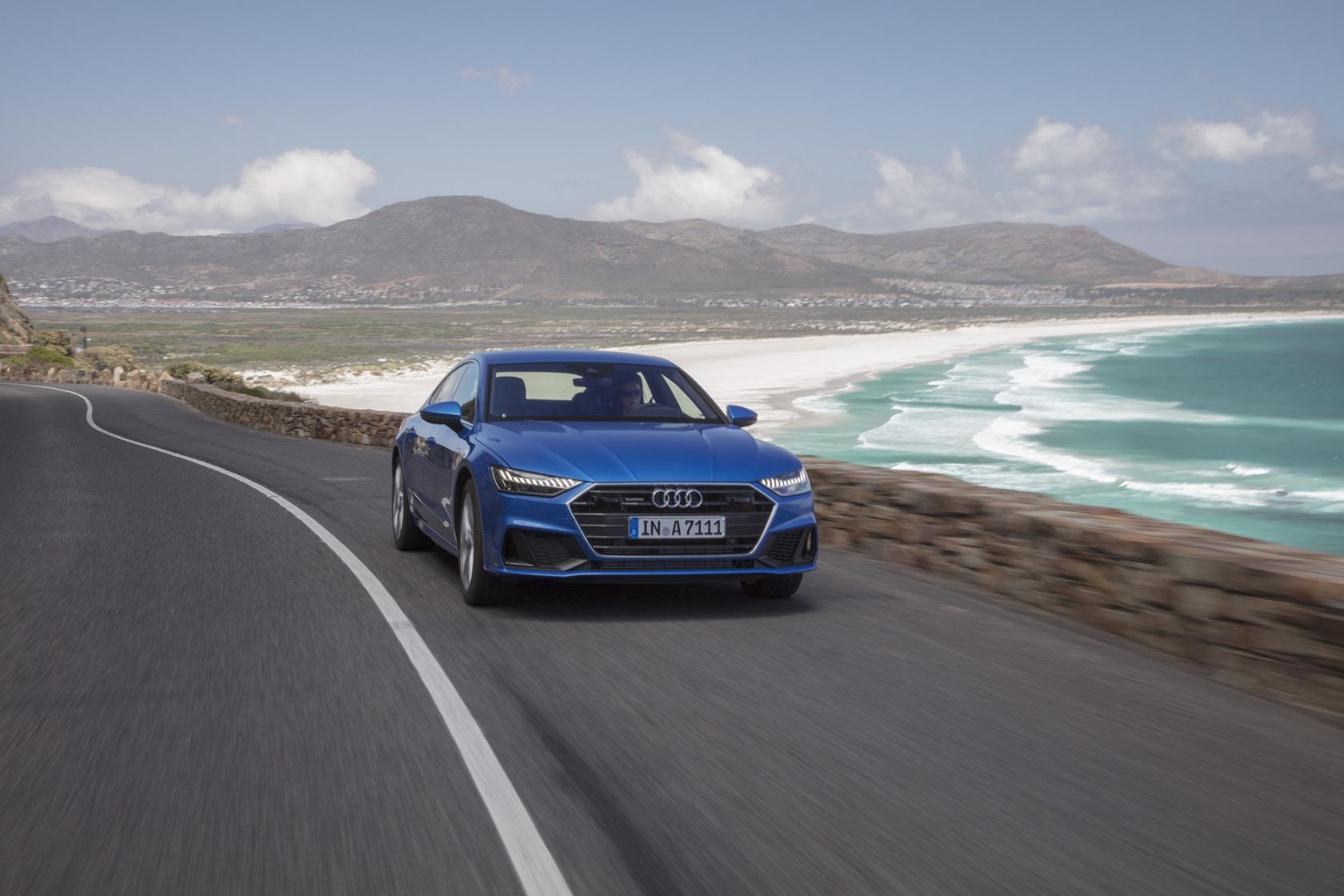 Of course, the 2019 A7 Sportback can’t just be an art project: it must be functional, too. Compared to its predecessor, the 2019 model keeps the telltale silhouette while doubling-down on the sportier touches. The lower and wider grille, a new unified tail light, sharper shoulders, a built-in spoiler that automatically extends at 75 mph, and a more pronounced lip on the back are just some of the more obvious new design marks. At the same time, the familiar roofline and distinctive tapered rear remain, to continue the aesthetic legacy. 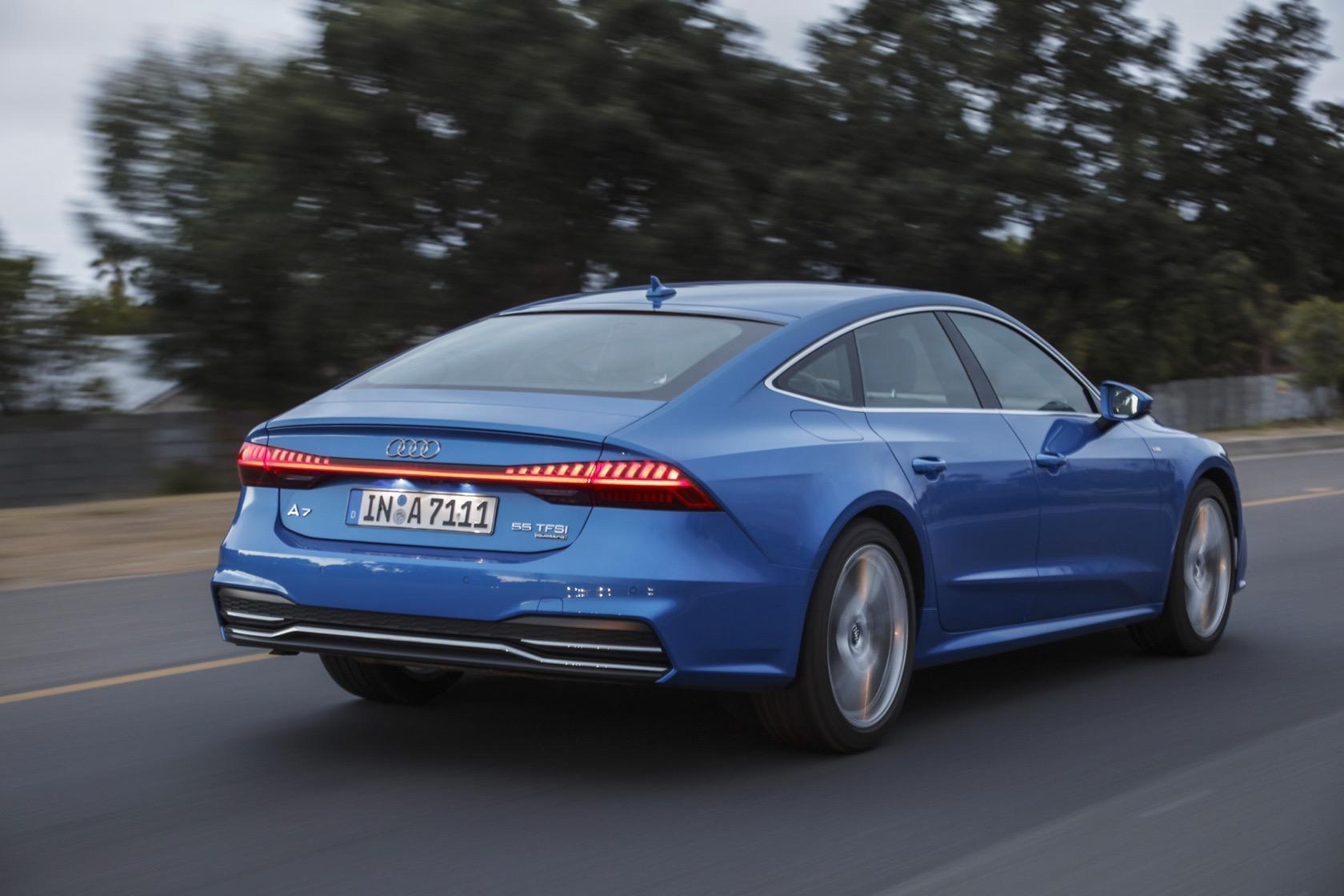 Under the hood, there’s more newness: the mild hybrid engine or “MHEV”. Combining a 3.0 liter V6 TFSI engine with a 48-volt electrical system, the 2019 A7 offers 340 HP and 369 lb-ft of torque, enough to do the 0 to 62 mph run in 5.3 seconds. More than just being about power, however, the A7 Sportback is also about efficiency. The belt alternator starter (BAS) charges a lithium-ion battery up to 12 kW when braking, as well as shutting the engine off not only when the car is at a halt, but when coasting between 34 and 99 mph. Indeed, Audi’s new start-stop feature doesn’t even wait for you to actually stop. Instead, it activates automatically from 13 mph, then uses the front cameras to restart the engine when the car in front begins to move. 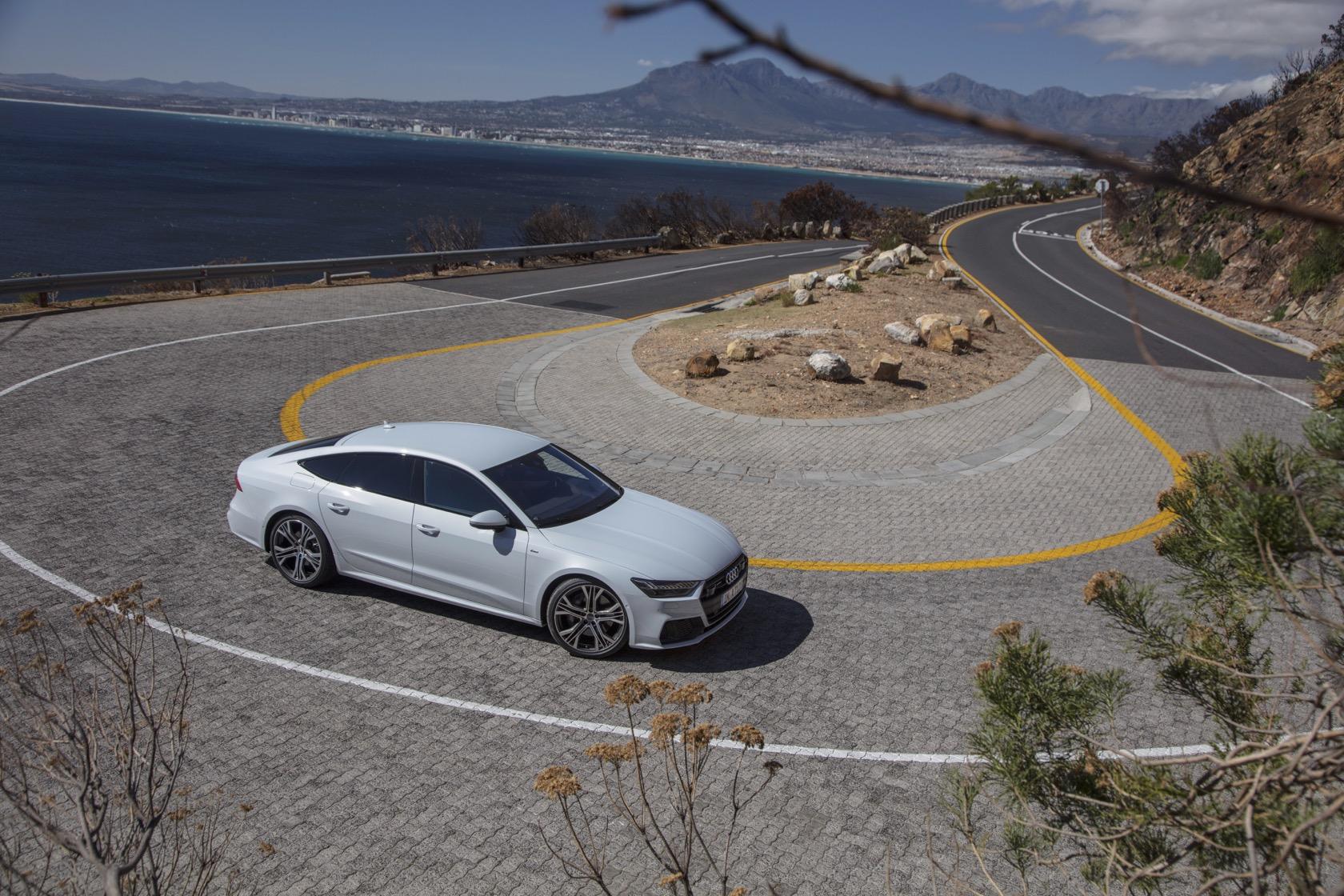 How does the A7 Sportback perform in the real world? Unlike my recent 2019 Audi A8 level 3 autonomous drive where I went hunting for traffic, this time around I was on a mission to find roads less traveled. Unfortunately, folks all over the world must’ve gotten the memo that Cape Town is an extremely beautiful city to visit and, as such, traffic proved to be horrendous. The first day saw solid jams for hours on in and, at one point in the drive back to the hotel and unbeknownst to my drive partner, I deliberately got lost so that I’d get more seat time. Very sneaky, yes, but it gave me the opportunity to test out the Audi AI traffic jam pilot system which proved to be fantastic at keeping pace with stop-go urban traffic at up to 37.3 mph.

Given the A7’s interior, there are worse places to be trapped, but it’s really the open road where the car shines. Still, before getting there I had a first-hand experience of just how important – and how capable – the active safety technology is in this new car. 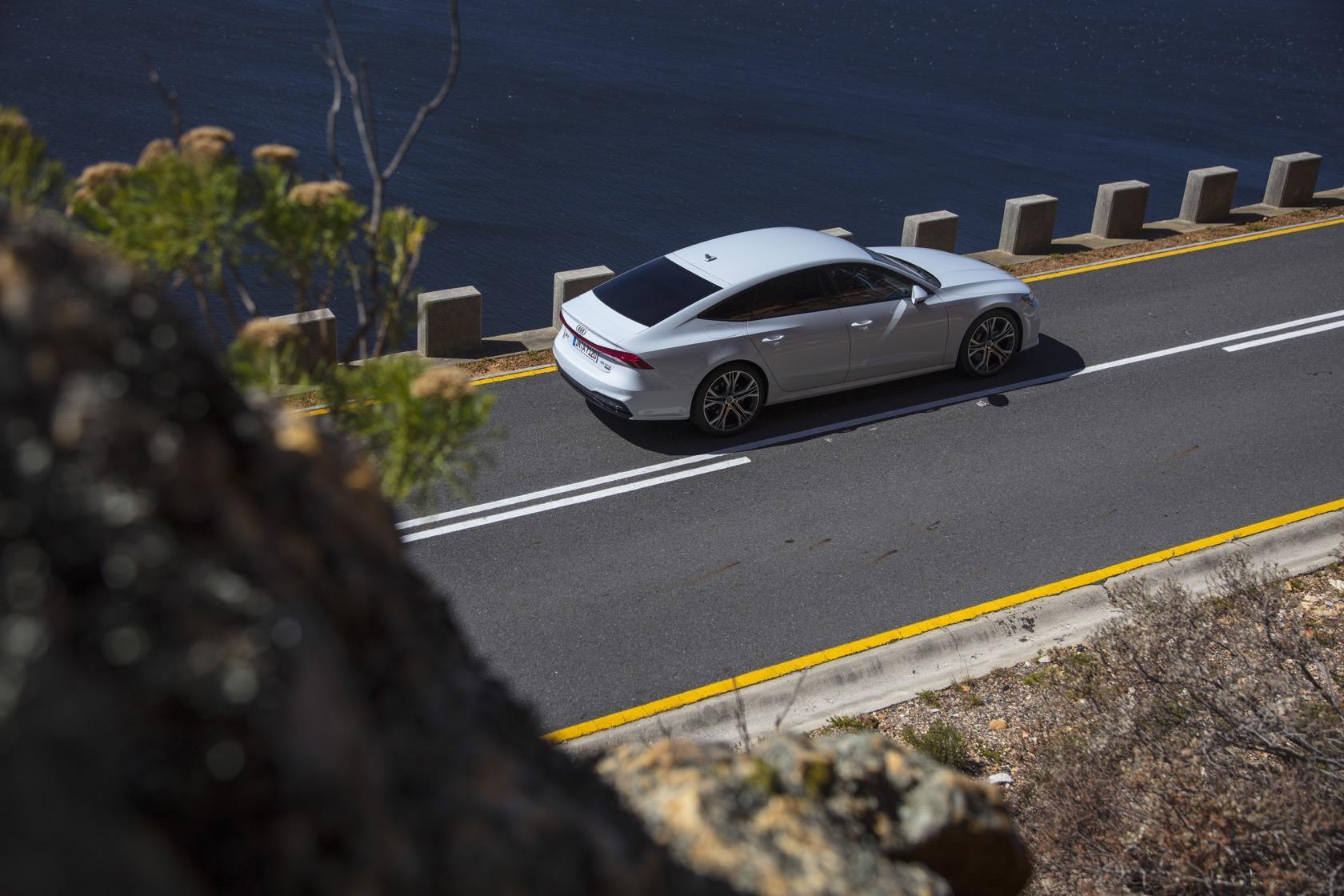 In Cape Town, it seems, it’s commonplace for pedestrians to walk on the side of the road, both on city streets and highway. Indeed, it’s fairly normal for pedestrians to cross over the freeways. It’s a worst-case-scenario for any driver, as was a man jumping out in front of the A7 while I was at the wheel. I slammed on the brakes, but Audi’s pre sense front and pre sense city active safety systems joined in too, kicking in their own exaggerated braking force and helping prevent an accident.

I’ve had plenty of hands-on experience aiming a car towards a mannequin and having the system jolt things to a complete stop before a collision, but nothing in those test scenarios quite prepares you for a real-life experience of the technology at work. Beginning with the Audi A8 and now the A7 Sportback too, the Audi pre sense and pre sense city safety systems can also detect cyclists in addition to pedestrians, while the car is traveling at up to speeds of 40 or 52.8 mph, depending on the model. They’re also able to detect other cars on the road, at up to speeds of 155.3 mph. 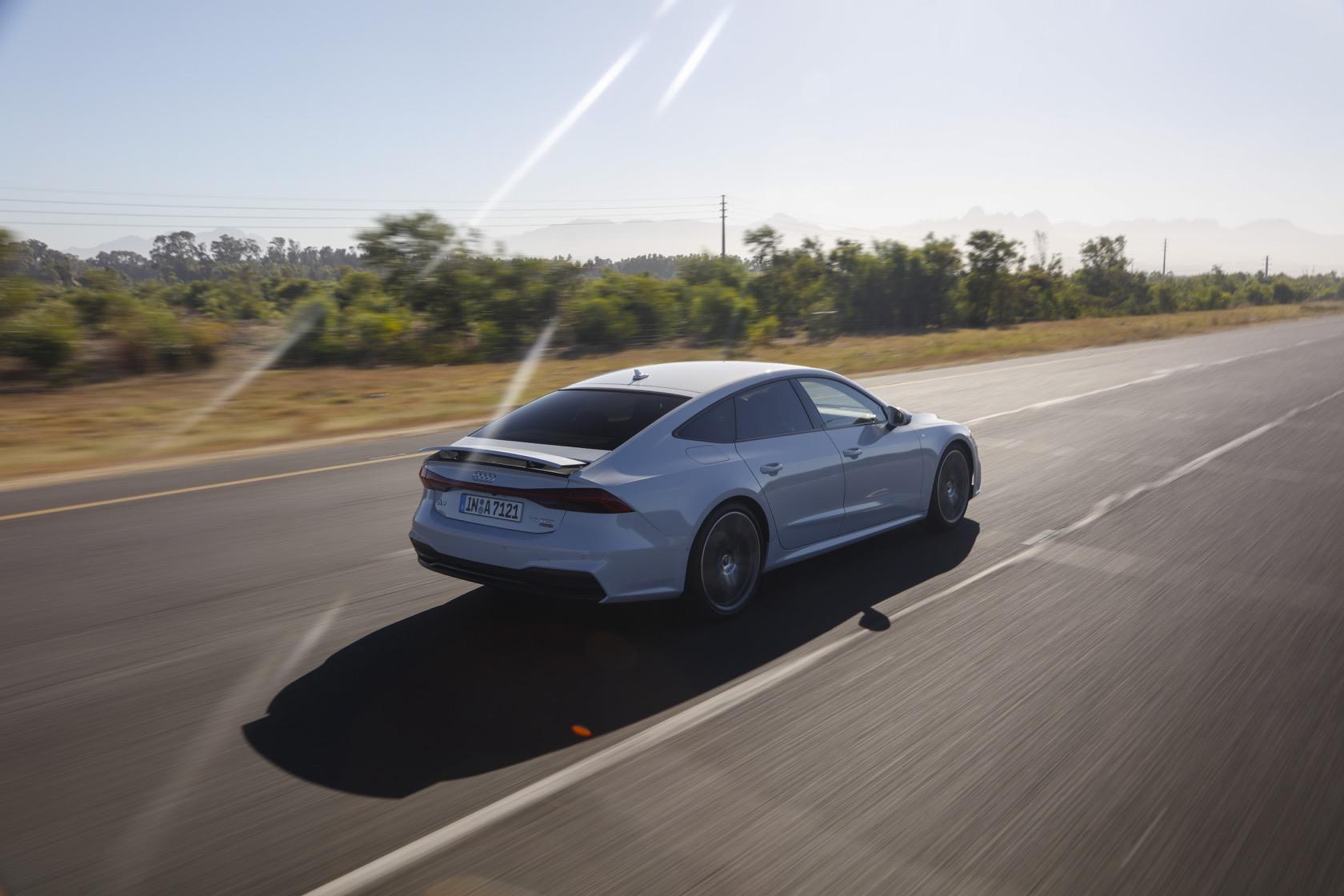 Once clear of the city and its pesky pedestrians, we found sections of roads with few cars and plenty of twisting turns. The open roads along the jaw-dropping coastline of Cape Town made for an excellent place to open up the V6. For the 2019 model year, Audi has paired it with its new 7-speed, dual-clutch transmission, replacing the A7’s former 8-speed. It may have lost a gear but it has only gained in accuracy, with shifts as smooth as butter, particularly when there’s literally seconds to pass slower moving cars on a tight two-lane road.

Equipment and features for the US market aren’t nailed down yet, nor pricing, and as such we don’t know if the 48-volt “coast mode” will make it stateside. It’s possible that the feature won’t be high on the list of priorities for buyers in the US, which I can understand, though if I was buying the A7 Sportback and Audi didn’t allow me to check off the optional Dynamic all-wheel steering, I wouldn’t be so happy. While the standard equipment package includes progressive steering with a sports ratio, the combination of dynamic steering and rear-wheel steering takes driving to a whole new level. 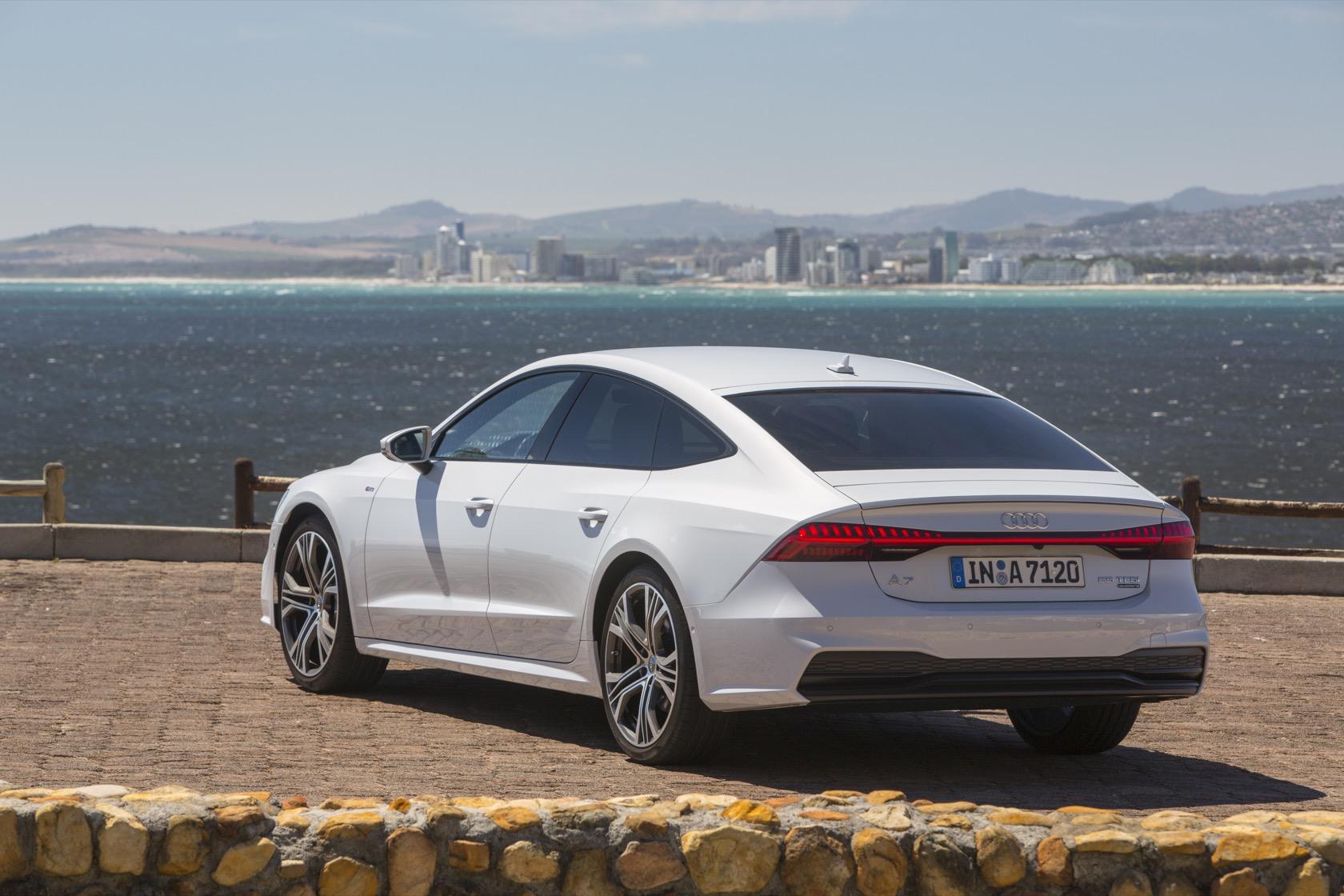 Cruising at lower speed around town, pulling into tight parking spots or making U-turns is significantly easier because the rear wheels turn in the opposite direction up to 5 degrees. It essentially shortens the wheelbase of the car, at speeds between 3.1 to 9.3 mph. At higher speeds, especially for quick passing maneuvers, the rear wheels follow the movement of the front wheels by an angle of up to 3.5 degrees. In that case, you get the sense of a longer wheelbase car, which ultimately results in more stability.

What we do know will make it to American shores is Audi’s drive select system. Depending who you’re with and the road conditions, there’s the option of allowing the drive modes to do all the heaving lifting in auto; or, as seemed preferable once free of traffic jams, you can switch over to dynamic and push the A7 Sportback to its fullest potential. There’s also efficient and comfort modes, with each adjusting factors like how quickly the transmission changes gears, the behavior of the sports differential and quattro drive, the steering, and the suspension’s damper control. If you prefer, you can customize individual mode with your own choice of settings. 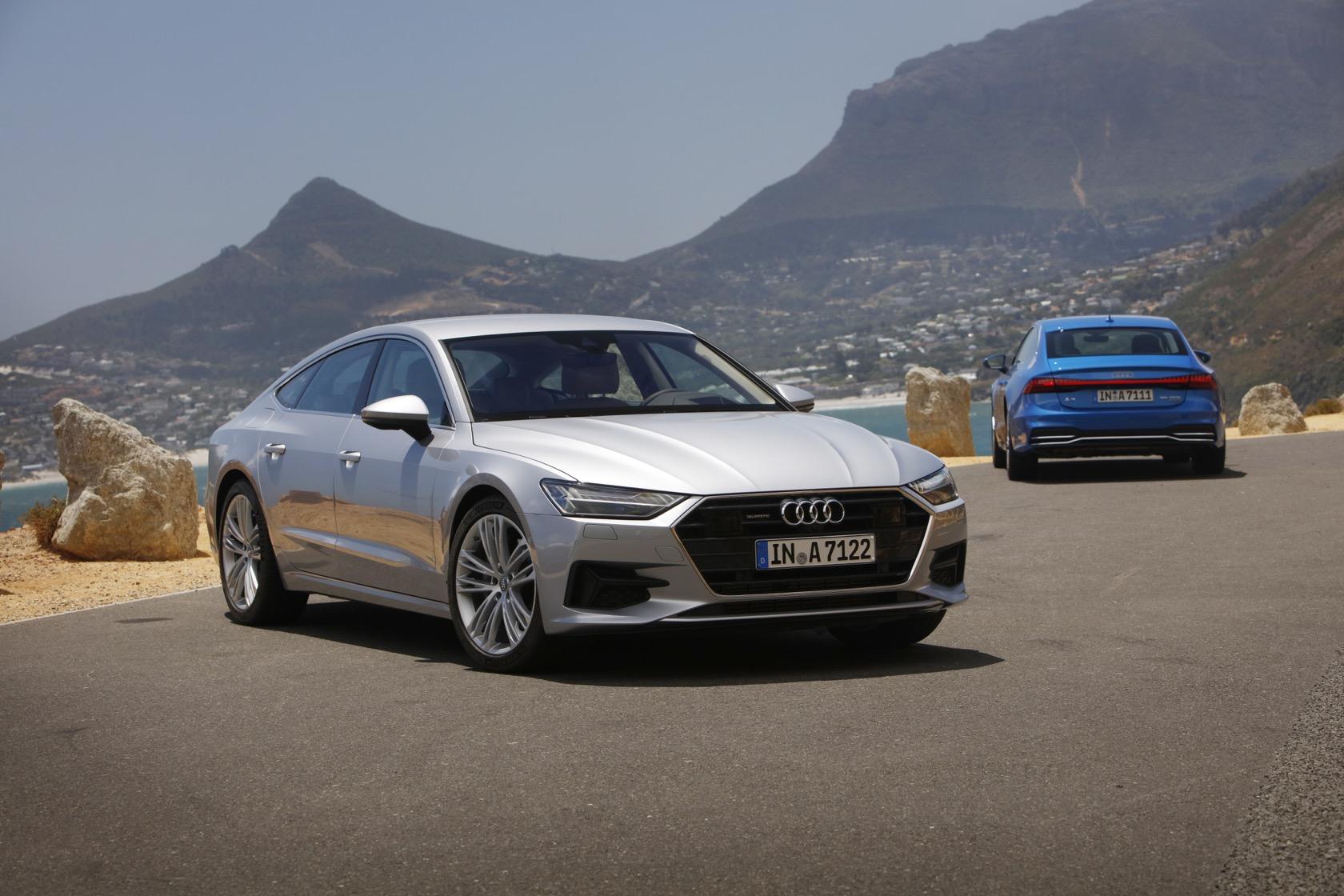 Whatever your preference, it’s the Audi AI active suspension that’s doing all the heavy lifting. Depending on road conditions it can independently increase or decrease the load on each wheel, keep the car leveled. It proved most pronounced when we drove through some rough roads around Cape Town. On a few spirited stretches around the coast, especially when dealing tight switchbacks, the A7 does an astonishingly good impression of a sports car when in dynamic mode. The suddenly stiffer suspension reduces body roll noticeably.

Audi is positioning the 2019 A7 Sportback as a break from the past, with a new design and new technologies. All the same, though, the 2019 model is clearly an A7 through and through, picking up the torch not only in its design but in its spirit too. Sporty like a coupe, spacious like a sedan, and versatile like a wagon, the 2019 A7 Sportback is the perfect marriage of old and new, putting design, engineering, and technology at the service of what should truly be the center of a car’s universe: the driver at the wheel.