Third new model in the British car company’s Second Century Plan, the 2019 Aston Martin DBS Superleggera Super GT is arguably the most striking so far. Aston’s goal of introducing seven new models in a span of just seven years is no small challenge, and when you’re replacing the much-loved Vanquish – not to mention aiming to lock heads with the Ferrari 812 Superfast and Bentley Continental GT – everything must be pitch-perfect.

“The all new Aston Martin DBS Superleggera is part of the GT family and is our premier Super GT car,” Paul Barritt, Vehicle Line Director for both the DB11 and the DBS, explained to me. “There are particular elements in the DB11 that you can find in the DBS, particularly the glass house and the doors, but then every other panel is different.”

It’s not just the sheet metal that’s changed, mind: the ethos is new, too. If you thought the DB11 was little too focused on the ‘grand touring’ end of the spectrum, the new 2019 Aston Martin DBS will stir your loins in an altogether more enthusiastic way. True to the Superleggera nomenclature, there are full carbon-fiber body panels and a bonded aluminum structure, both of which help to reduce mass. In short, you’re looking at a GT that’s more than 158 pounds lighter than the DB11, yet packing the same 5.2-liter twin-turbocharged V12 engine. 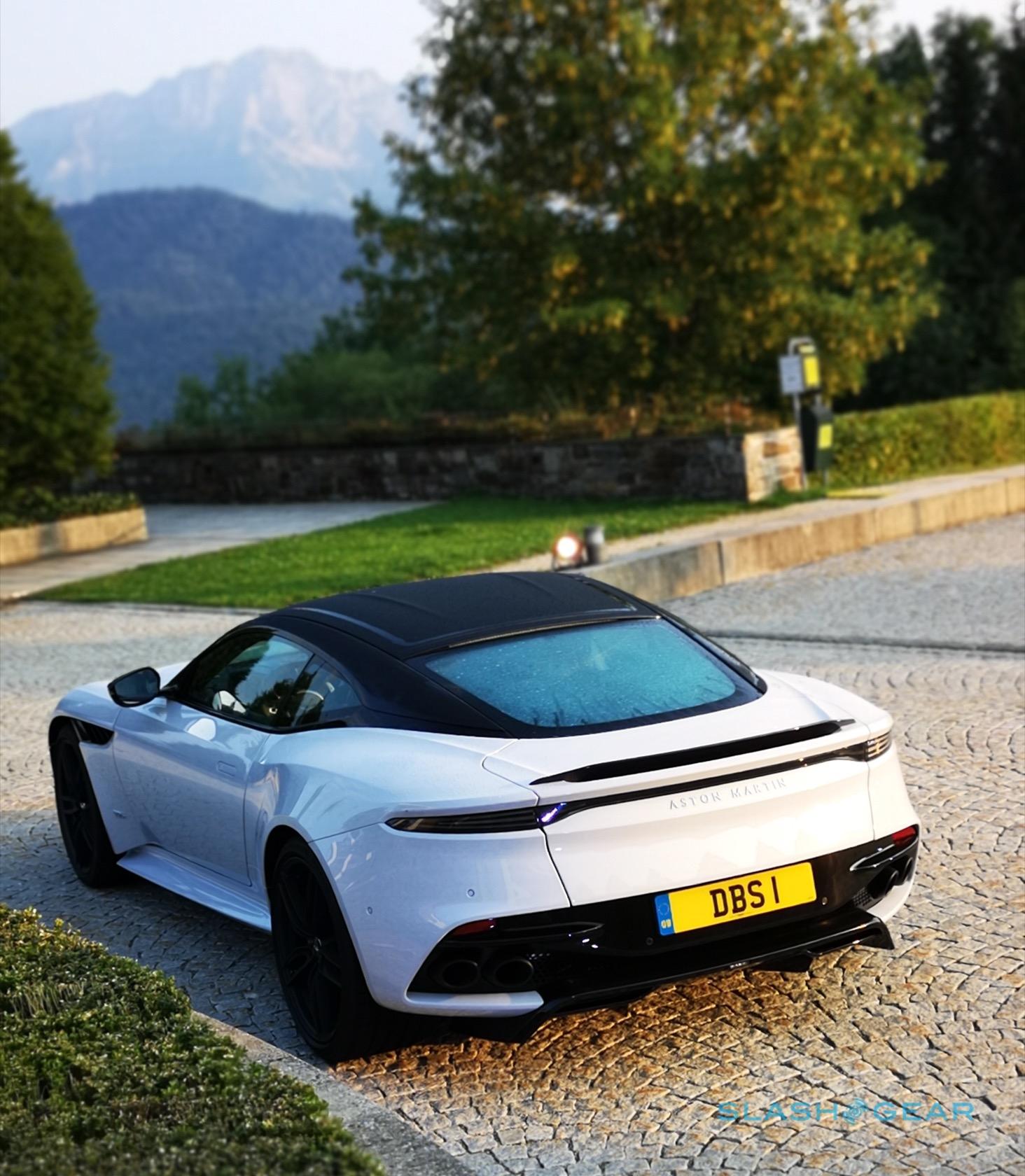 Power is delivered directly to the rear wheels, courtesy of a brand new eight-speed automatic transmission with a shorter final drive ratio. Paired up with the new active exhaust system, you can expect a more aggressive and spine-tingling exhaust growl, particularly when the dynamic mode is set to Sport Plus. Sure, Aston Martin made a supercar that looks the part, but the soundtrack is equally important and the DBS nails that too. 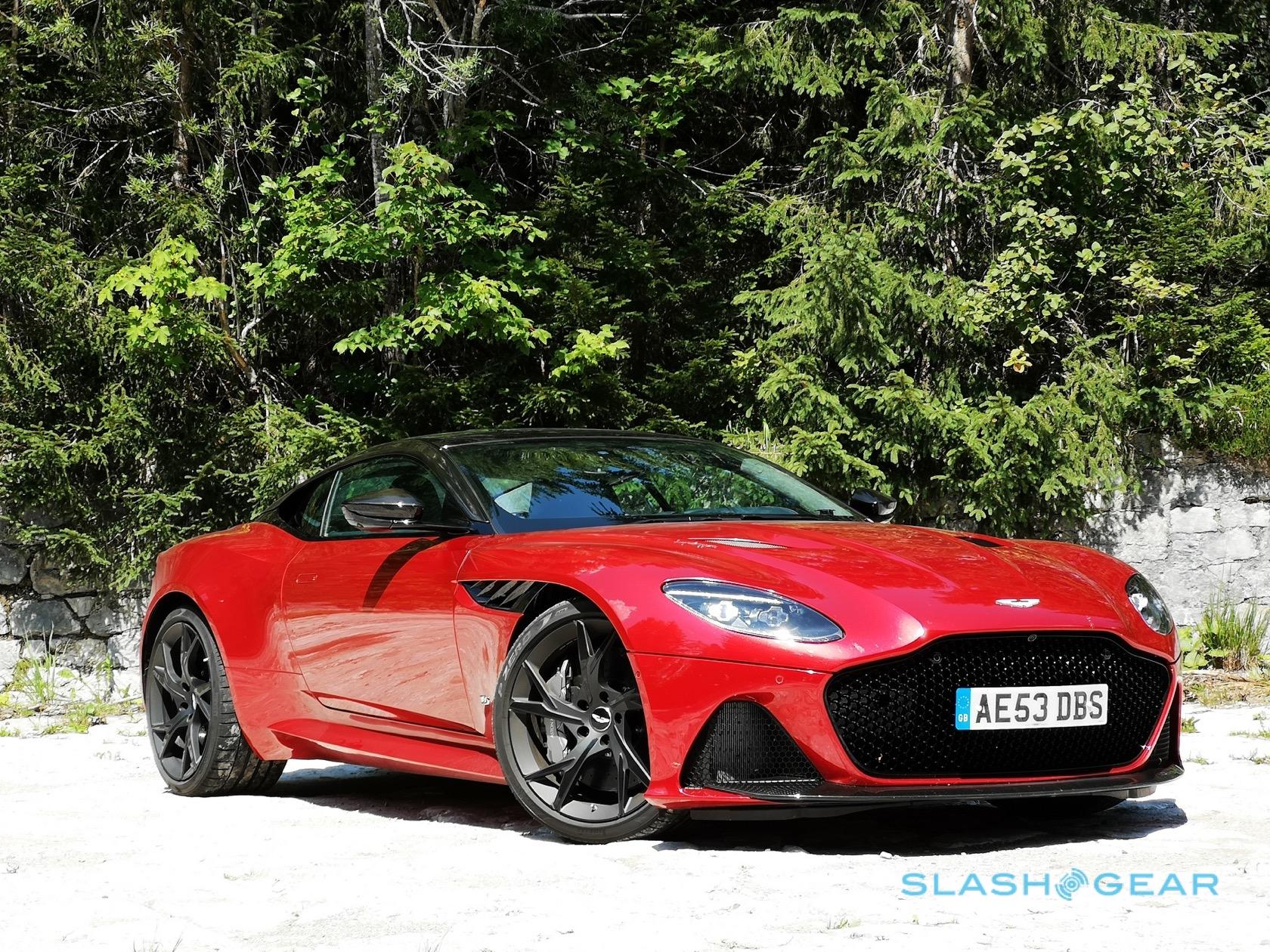 All the same, physics must have its say, and so in Sport Plus mode the DBS has been consciously designed to limit the torque put down in first and second gear. Let loose, you’d get spinning wheels, plenty of smoke, but not much forward movement. It feels a little odd at first, but by the time you’re in third it’s abundantly clear that straight line speed is absolutely not a problem for this car.

Lighter and more powerful than the automaker’s existing grand tourer, the 2019 Aston Martin DBS Superleggera delivers 0 to 60 mph in just 3.4 seconds. A couple of seconds more and you’re doing 100 mph; keep on the gas, and you’ll quickly hit the top speed of 211 mph. That, if you’re keeping score, matches the Ferrari 812’s top tilt, even if the Italian thoroughbred sports a more powerful 789 horsepower naturally-aspirated V12 instead. 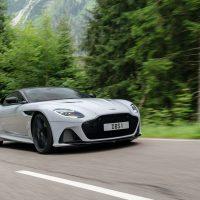 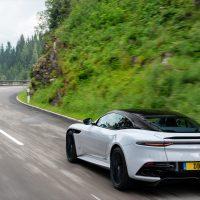 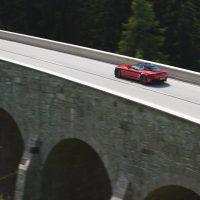 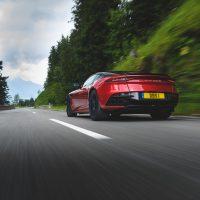 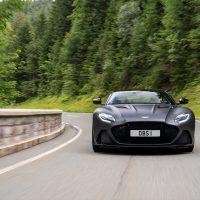 But hey, a Dodge Challenger Demon can go very, very fast in a straight line. The interesting part, I always suspect, is when you reach the first corner. I’d forgive you for thinking that, with all its horsepower and torque, driving the DBS Superleggera could be difficult. Sure, when you’re flat out the rear-end can feel like it might want to play more than you’d like from a six-figure supercar, but the reality is that the big numbers are all oddly usable.

Cherry-picking strategies from previous Aston Martin cars has helped, certainly. “The chassis is kind of a hybrid of things what we’ve done on the Vantage and DB11,” Barritt told me. “The front end is from the Vantage to improve the lateral compliance. In the rear, we also utilized the isolated rear sub-frame of the DB11 rather than going to a fixed and non-isolated sub-frame to keep the Super GT nature of the DBS.” 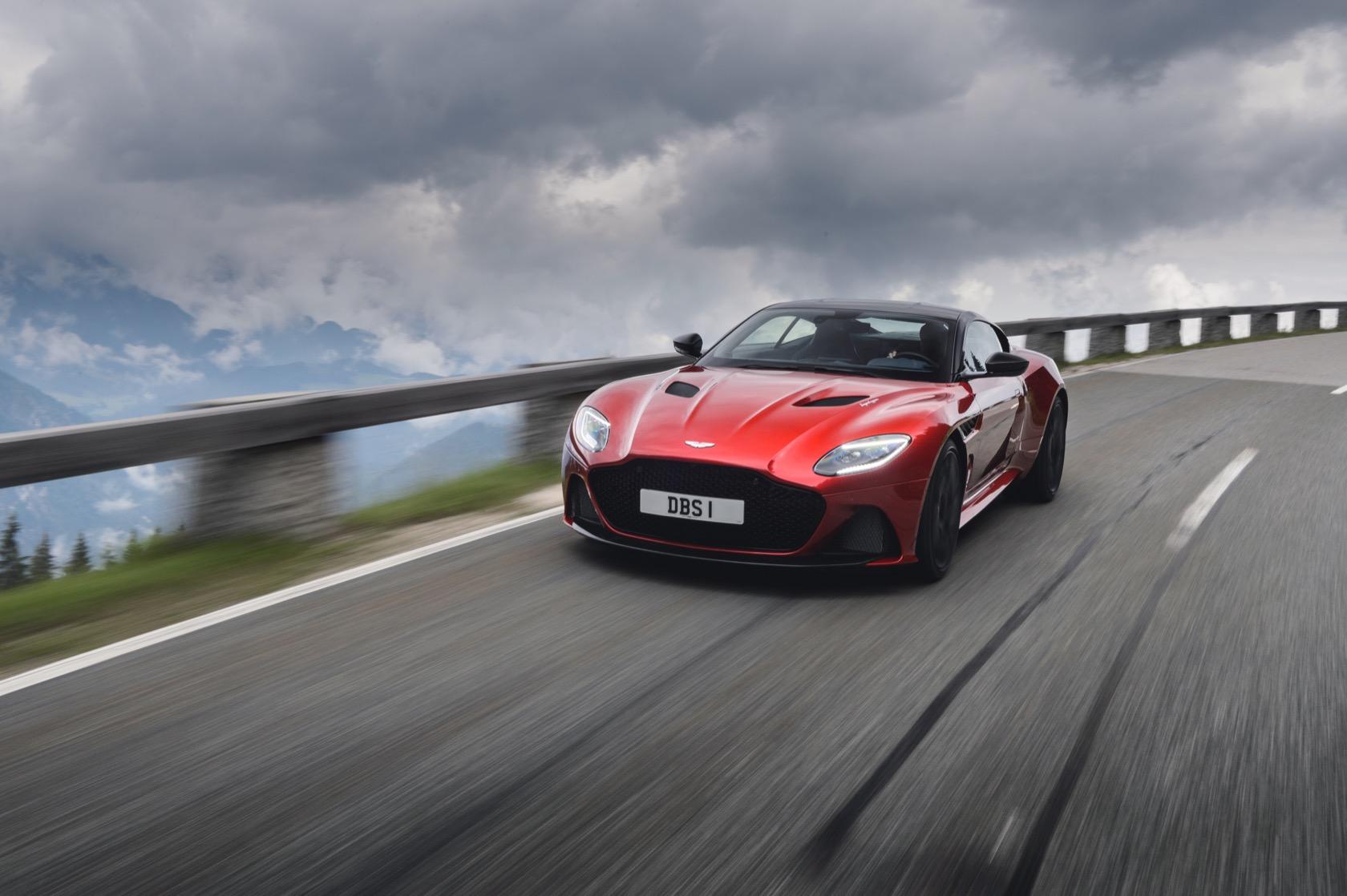 I’m reminded of that dichotomy during the last stint of my drive, a spiraling road with sharp elevation changes and no shortage of corners. It reminds me of the Pike’s Park Hil Climb, abbreviated but still more than lengthy enough to test the dynamics of the DBS and, more importantly, its brakes. At this paygrade you’re looking at carbon ceramics as standard.

Specifically, a set of seriously oversized ventilated discs – 410 mm at the front and 360 mm at the rear – and plenty of pistons to squeeze them. Six-piston calipers up-front and four at the back mean the DBS hauls to a halt without fuss or drama. The adaptive suspension pairs forged aluminum double wishbones at the front and a multi-link set-up at the rear. I had my doubts that it could deliver both the sort of long-distance cruising comfort a true GT car excels at while also delivering a blistering improvement on the DB11, but Aston Martin has done the job with the DBS’ three drive modes: GT for comfort, Sport for enhanced handling, and Sport Plus for maximum attack mode. 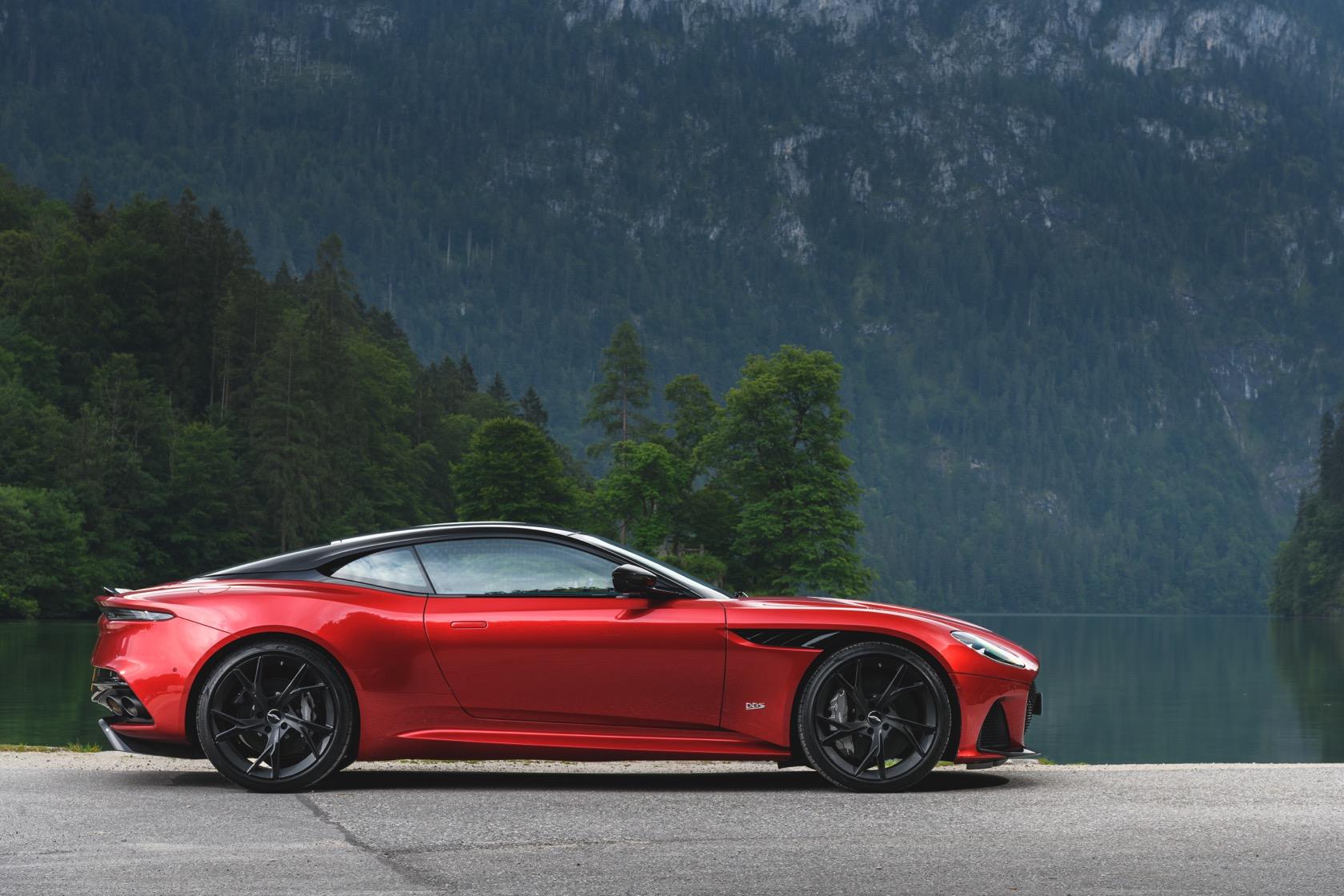 It’s a big car, but it’s also fairly lightweight, so the torque to power ratio is massive. A mechanical limited-slip differential with torque vectoring pushes the power to the rear wheel that needs it the most. If the DB11 is a bounding tiger then the DBS Superleggera is an agile panther, sacrificing little in the way of speed just because it needs to change direction.

It looks the part, too. The 2019 Aston Martin DBS’ oversized honeycomb grille is a testament to the hardcore potential of the new car, not to mention a nod back to the last time we saw the namebadge. “We emphasized the power by the size of the grille and the nostrils,” Marek Reichman, Chief Creative Officer, pointed out, “which were a derivation of the ones found in the DBS from ten years ago.” Everywhere you look, the bodywork is bulging with power domes, as though the car’s surfeit of torque is physically pushing its way out through the carbon-fiber skin. The hood nostrils don’t snort like a beast untamed, but it wouldn’t really be a surprise if they did. 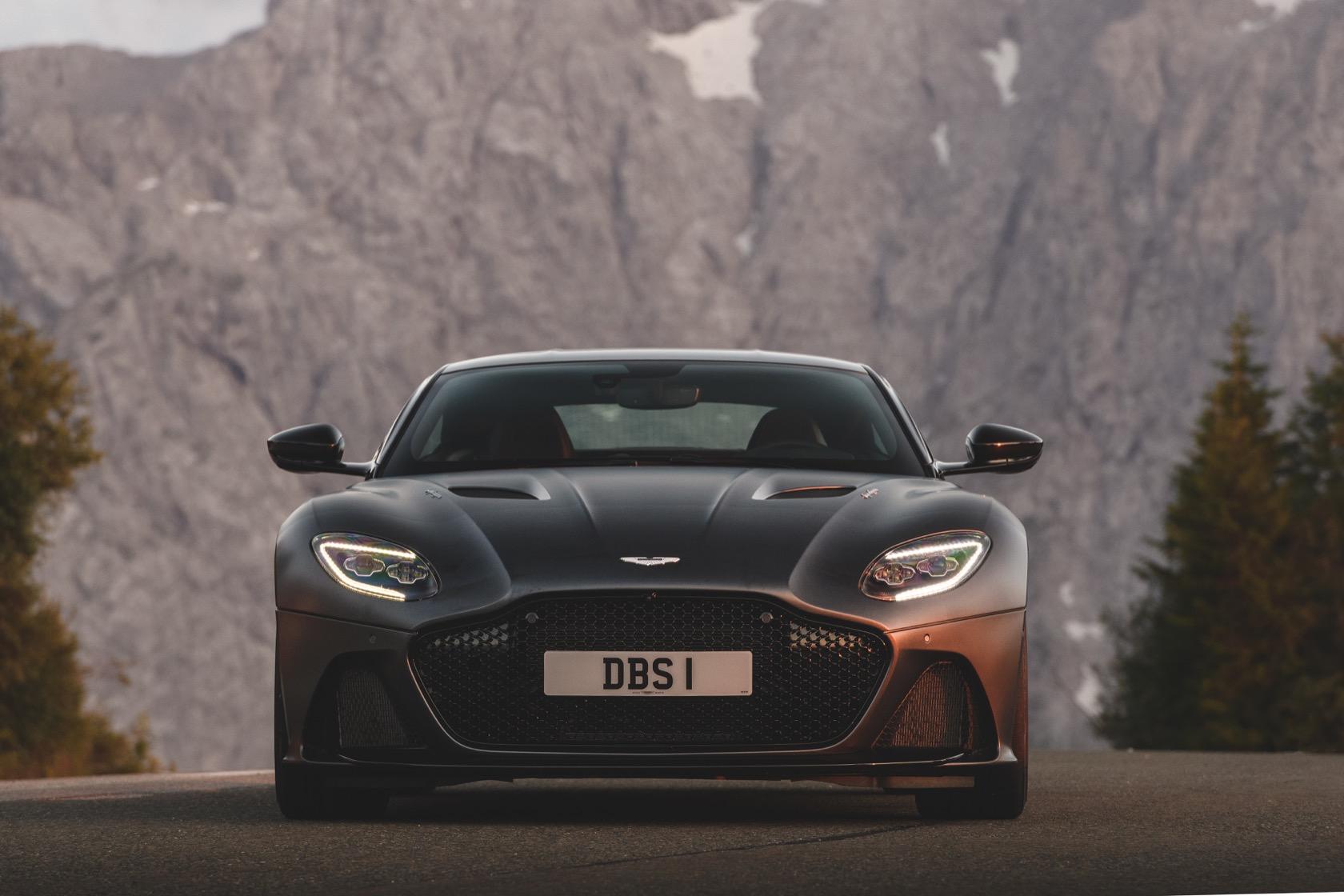 The new DBS has shorter front overhangs, a wider track, and a fixed wing spoiler that pushes down the rear using the rush of air that feeds through the C-pillar ducts. Particularly striking are the vents behind each of the front wheels, pretty much lifted straight from the ridiculous Aston Martin Vulcan track car.

“Beauty, as you know, is a mathematical equation and nature does it perfectly,” Reichman points out. “And every single time we develop a car we use that principle of beauty. The surfaces on an Aston Martin should appear natural, and there’s nothing unexpected about the surface. But if you combine all the surfaces and lines together, you get that magical and beautiful equation.” 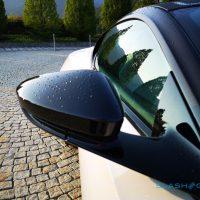 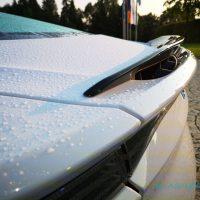 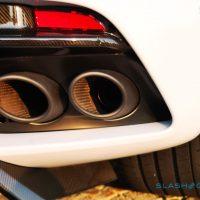 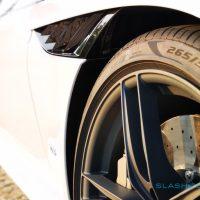 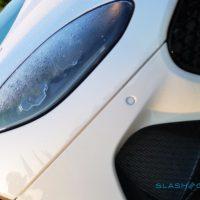 I’m no designer but I do trust my eyes, and there’s no arguing with the fact that the DBS Superleggera is a beguiling car. What’s fascinating is just what a difference body color makes. In bright red or pure white, the Aston looks sharp and punchy. The glorious Satin Xenon Grey, meanwhile, turns it into a fierce stormcloud, more than fit for 007. 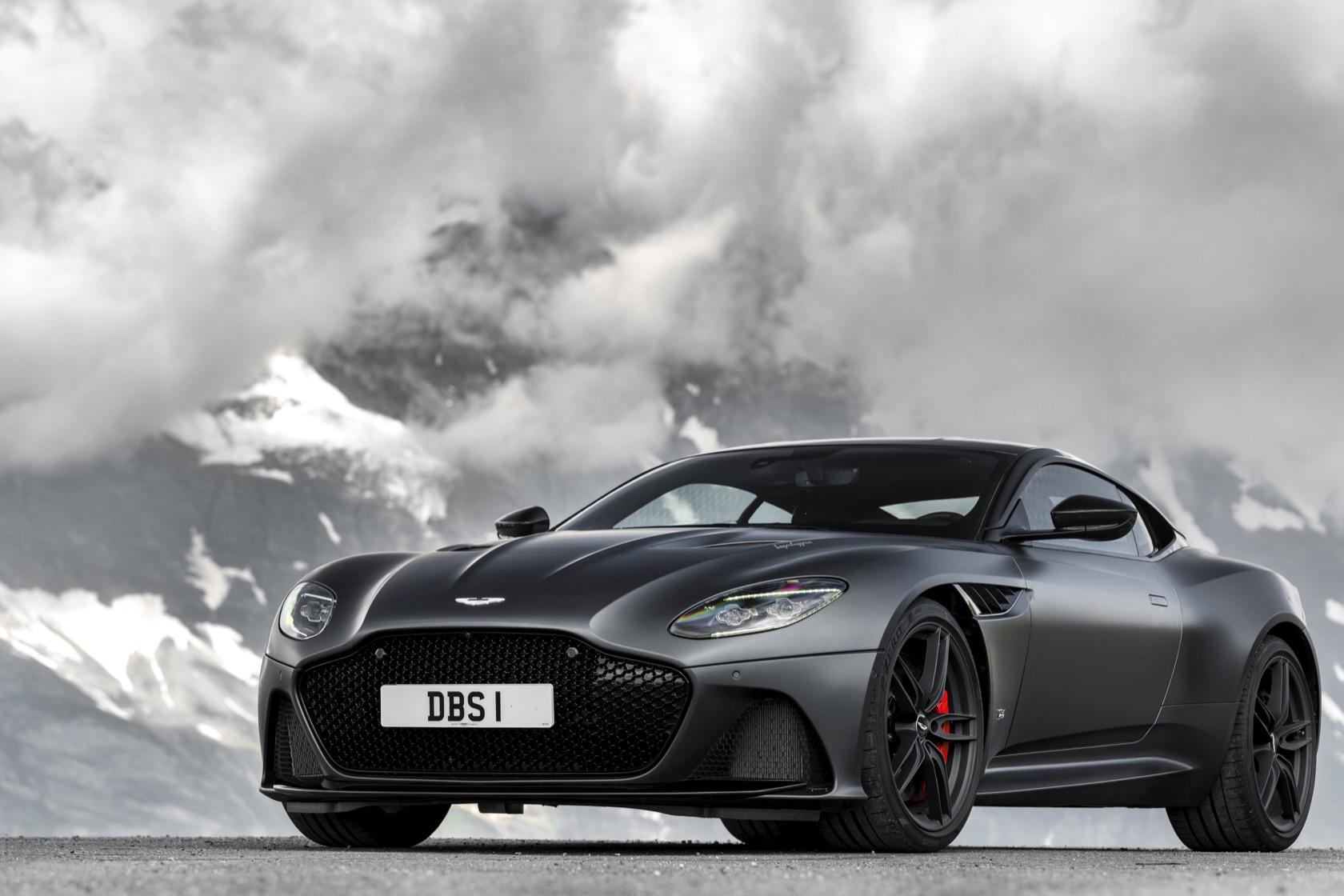 Either way, you get a carbon fiber front splitter, rear double diffuser, and aeroblade spoiler to help push the rear tires harder to the ground. It adds up to 397 pounds of downforce at the top speed of 211mph, the highest of any Aston Martin production road car.

Inside, Aston’s track record of nailing cabin fit, finish, and layout continues. In the case of the DBS Superleggera it’s all about authenticity: no fake wood and no pretentious trim. “If it looks like metal, it is a piece of metal,” Reichman says. Attention to detail is the name of the game, down to selecting only the finest Scottish leather from long-haired cows, to prevent nicks and marks on the leather caused by barbed wire or mosquito bites. “You can feel it, you can touch it, you can smell it,” Reichman points out, “and that’s an important part of who we are.” 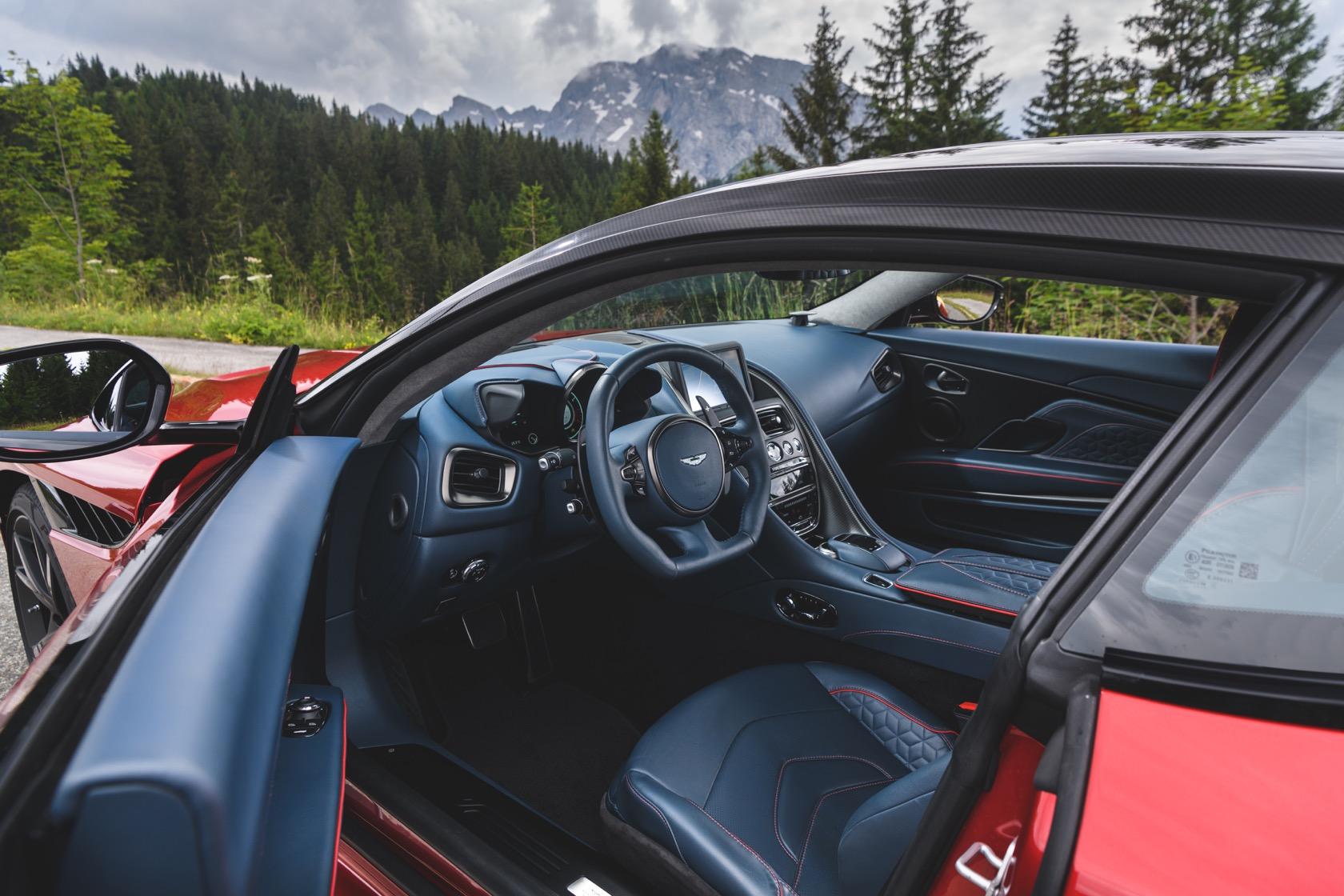 It also means looking outside the company when there’s expertise you can call on. The Mercedes-sourced infotainment is a grand example, continuing to be a vast improvement over the old system. Aston didn’t just graft it onto the leather-wrapped dash, though: it looks and feels as intentional as the rest of the cabin. 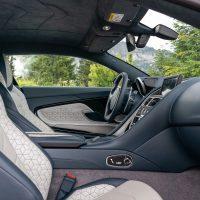 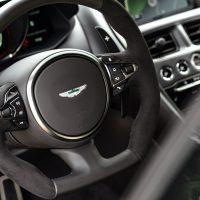 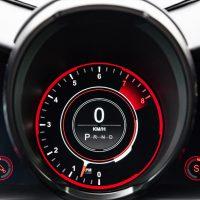 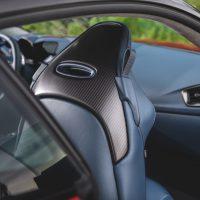 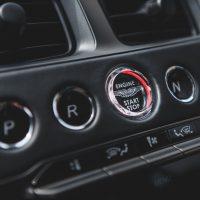 More important, it’s all damn comfortable. There’s copious space on the broad center console to rest your elbow, or even your entire arm, whether you’re driving or playing passenger. You sit low, cocooned, your body another component that’s plugged into the chassis. You can feel everything the rear end is doing in a way that few other RWD cars manage, that “centered” sensation from the Vantage only more refined and polished.

To say there’s plenty riding on this car is an understatement. “The DBS Superleggera not only marks the return of a great Aston Martin name,” Dr. Andy Palmer, President & Chief Executive Officer of Aston Martin, lays out, “but signals our return to the very pinnacle of the Super GT sector.” 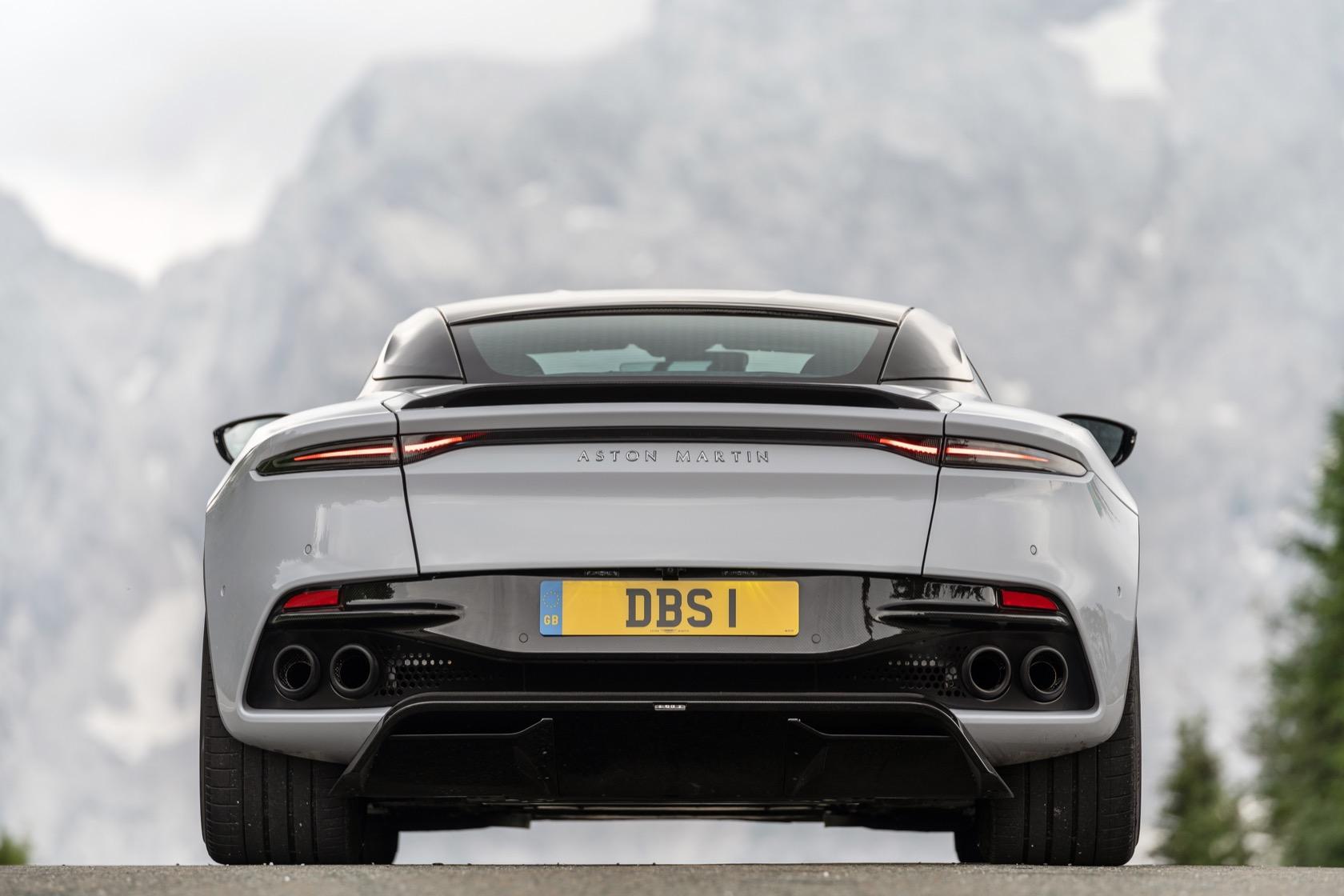 What makes that category such a challenge is that success hinges on both head and heart. Yes, your Super GT must be powerful, and fast, and exemplary technologically, but at the same time it can’t deliver that coldly, or with such laser-focused polish that the spirit suffers as a result. Greatness is blistering performance, certainly, but it’s also that addictive tingle delivered in splashy bursts to our frontal lobes: the recipe for not just “I admire this car,” but for “I think I’m in love.” 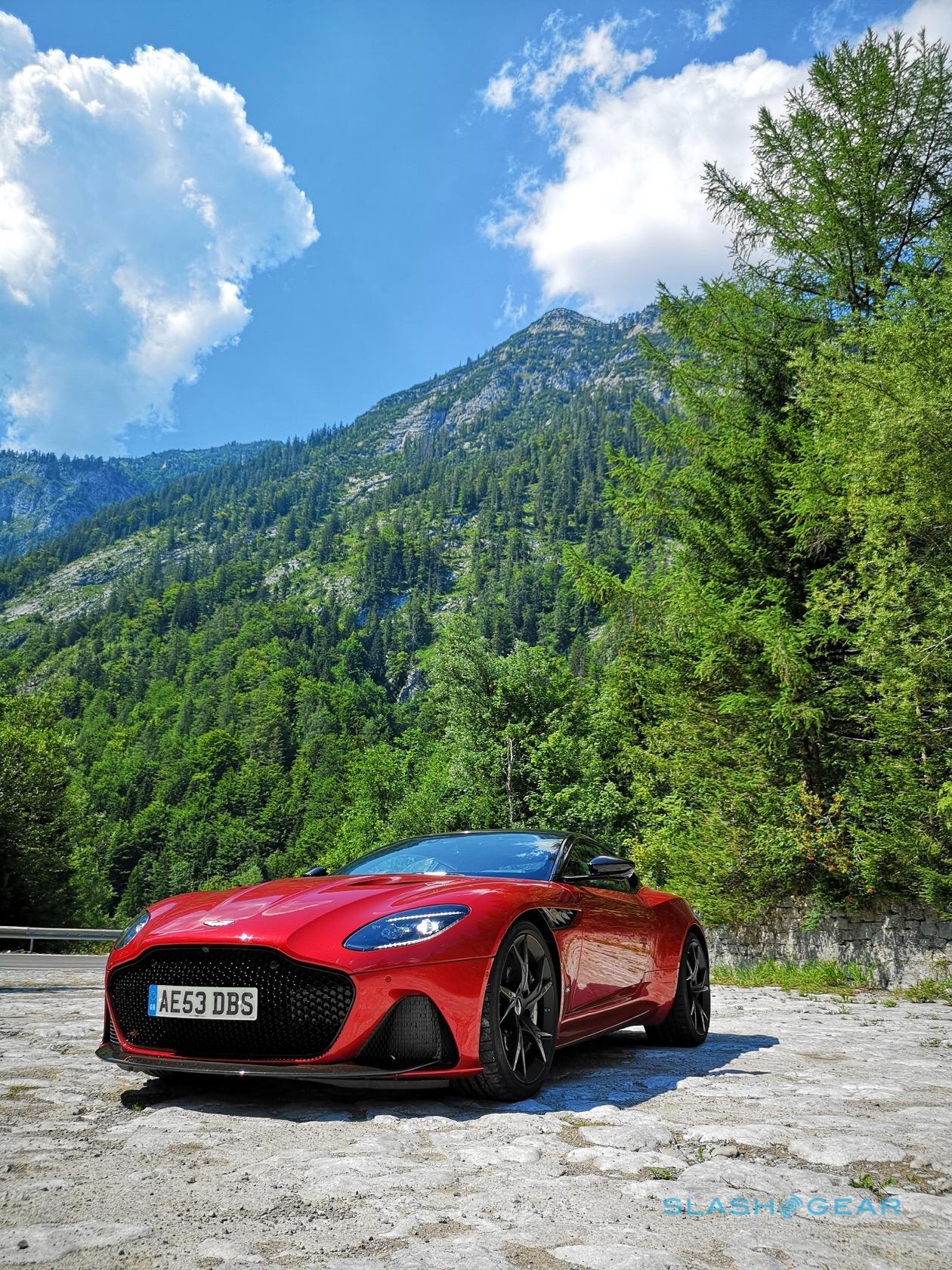 Affairs of the heart aren’t always logical, but I’m pretty confident when I say that the 2019 Aston Martin DBS Superleggera will strike fear in the hearts of Ferrari and Bentley owners on the road. That it does so – with a starting price of $304,995 plus destination – around $50k less than a Ferrari 812 demands is the icing on a very agreeable cake. Deliveries kick off in the fourth quarter of 2018, but the lovestruck grins will last a whole lot longer.