The world’s moving towards turbochargers and Audi’s not immune to the change, and as a result, we have this new Audi-built 2.9-liter V6 twin-turbo engine. It’s at the heart of the 2018 Audi Sport RS 5 Coupe, described by Stephan Winkelmann, CEO of Audi Sport GmbH., as “the gran turismo among the RS models from Audi Sport.” That means “elegant aesthetics with high everyday usability,” something I got to test out in full on the roads of Andorra.

Normally I wouldn’t write up a review of a first drive car, but this RS 5 Coupe drive was no typical program. The challenge started with choosing a car, though that proved to be a no-brainer given that the new halo color is Sonoma Green Metallic. Unlike the gray with black optics package, or red with aluminum exterior trim, the green and black optics took some time to grow on me. 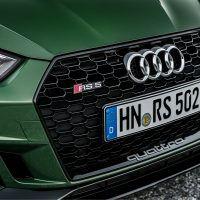 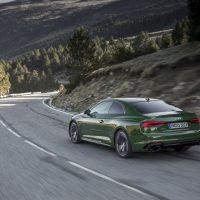 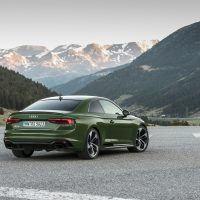 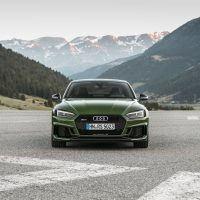 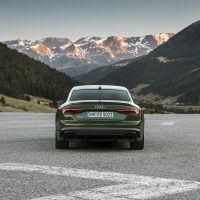 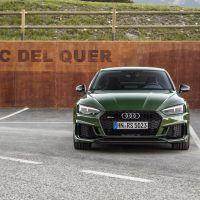 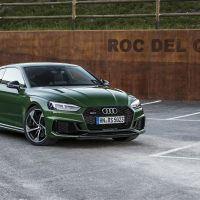 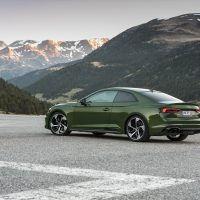 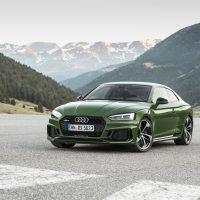 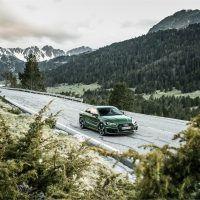 It’s a shade of green much darker than the brighter hue that helped distinguish the new RS 3 that we drove a few months back in Oman. That being said, a few hours in and out of the car driving towards Andorra, it grew on me. Would I buy the RS 5 Coupe in this color? I can’t quite say. For that matter, would I buy the RS 3 in the bright green? I’m not sure about that either. While they’re both unique for each car, I’m not sure how well they’ll age over time. The white was a great looking color option while the blue felt muted in a way that hid much of the new character lines. That leaves gray, and while it might seem like a too-safe choice in reality it looks absolutely gorgeous. Pair it with the US-only black optics exterior trim option and you’ve got a car that’s going to age exceedingly gracefully in the years ahead. 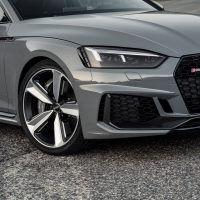 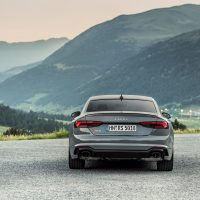 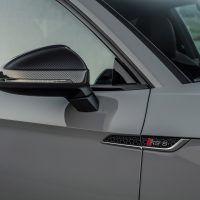 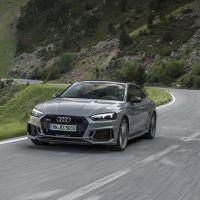 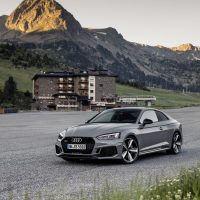 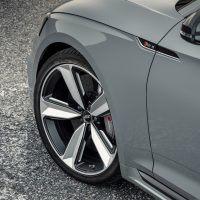 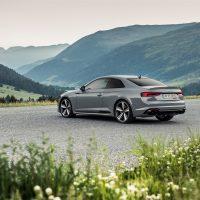 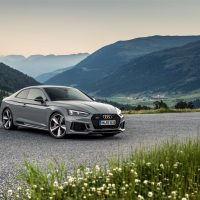 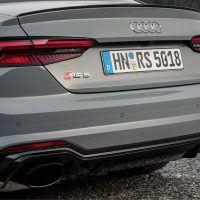 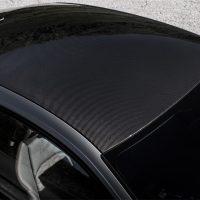 The RS 5 embodies Audi’s new design language, spearheaded by Chief Audi designer, Marc Lichte. Other than the roof, hood, and trunk lid, the RS 5 Coupe doesn’t share any other body components with the regular A5 and S5 cars. The fenders are 0.6-inches wider on both sides, with larger air ducts and a shallower and wider honeycomb-insert grille. These design cues are all inspired by the Audi 90 IMSA GTO, though bolder “quattro” badging, the subtle boot deck-lid spoiler, and two signature oval tailpipes are very much modern Audi.

So, too, are the underpinnings. The 2018 RS 5 Coupe is built on the MLB EVO B9 platform, also found at the core of other Audi models including the Q7, A4, Q5, the A5 family, and even the new A8. Weight savings include 68 pounds from the new engine – codenamed EA389 – which is significantly lighter than the old V8, and 33 pounds from the bodywork; in total, it’s 132 lbs less than the outgoing model. The trim I drove was fitted with a carbon fiber roof, too, contributing an additional 6.6 lbs cut, but unfortunately that won’t make it stateside, possibly because it doesn’t play nice with the moonroof Audi thinks American buyers demand.

Forget the carbon fiber, though, because this new engine is all about horsepower and torque: 450 HP and 600 NM (453 lb-ft.) respectively, with a wide peak torque range running 1,900 to 5000 RPM, and a 6,500 RPM redline. Fans of the last-generation V8 may miss that engine’s much higher 8,500 RPM limiter, mind. Still, there was never a time when I felt like I needed more grunt, regardless of the gear I was in. Audi claims a 3.9-second time for 0-62 mph, and while my opportunity to test this out wasn’t scientific, the RS 5 Coupe certainly felt more than capable of that.

Tick the RS Dynamic Package, meanwhile, and you get an increase in a top speed to 174 mph, along with dynamic steering, quattro with sport differential, RS sport suspension plus with Dynamic Ride Control (DRC), and Audi Matrix LED headlights. Frankly, for somewhere in the ballpart of $3k I’d say it’s a must-have for any RS 5 Coupe buyer. Less essential, but no less desirable for all that, is the $6k Dynamic Plus Package which adds a massive pair of 15.7-inch carbon ceramic brakes up front, a carbon-fiber engine cover, and tire temperature and pressure display.

As Audi’s range expands, it can be hard to keep track of how the difference cars compare. At first glance, for instance, it looks a little strange that the S5 has a slightly larger, 3.0-liter engine. While there’s 0.1-liters less displacement in the RS 5 Coupe, it does gain a whole extra turbo in the process. That, Stephan Reil, Head of Technical Development for Audi Sport, says was done for a number of reasons many of which would only appeal to hardcore engineers, but it basically comes down to burning a better mixture of air and injected fuel in the combustion chambers. “The heads remain the same, the roof of the compressor is the same,” Reil explains, “but the piston and piston geometry working in conjunction with the reduced bore results in a better burning scenario.”

Maximum turbocharger boost is 0.95, and as a result the new engine is on par with the outgoing naturally aspirated 4.2-liter V8. It only managed its 450 HP peak between 5,700 and 6,700 RPM, after all. Admittedly, there’s more lost along the way than just two cylinders: there’s also the distinctive noise of a V8. Instead, as it did with the TT RS, RS 3, and A5, Audi added a sound actuator at the base of the windshield. Downshifts get the snap and crackle you’d hope for, while the pop of the exhaust still comes through the tailpipes, not through the speakers. Put bluntly, the magic behind what Audi has done to build this emotional connection to the new engine is nothing short of fantastic.

It’s also allowed for more tonal tuning. “It’s not the same as we have it in the A-segment with the 5-cylinder, it’s a little louder,” Benjamin Holle, of Audi Sport RS 5 Marketing told me, “but this is a B-segment car, geared more toward adults.” To the casual listener, I suspect most won’t notice the lacking cylinders compared to the V8; it’s only the subtle vibrations that really give things away. “Ninety-Nine percent of what you hear comes from the engine and the exhaust,” Holle points out. “What we have for low rev sections, when you’re not driving too fast, there’s a sound actuator located sitting right in front of the windscreen to get some vibration to get into the windscreen for low rev speed to create a sportiness impression for the interior.”

It’s hard to think of Audi and not have Audi quattro all-wheel drive come to mind. In the case of the RS 5 Coupe, that means up to 60-percent of the torque to the rear wheels in normal driving, but as much as 85-percent shifted to the front should road conditions demand it. The rear wheels are also managed by the rear sport differential, which actively varies how much torque each gets: that maximizes traction, while the wheels can individually brake to improve cornering. The latter proved entirely noticeable in action slicing down the side of the Pyrenees Mountains between France and Spain.

The new engine is mated with a ZF eight-speed automatic transmission, adding an extra gear compared to the seven-speed dual-clutch automatic from the outgoing car. Now, it’s a fun gearbox to shift yourself, but no less effective when you let the transmission do its thing, leaving you to focus on the road ahead. For a good portion of the drive, Auto mode was more than enough for everyday driving. Compared to the regular S5 there’s a 0.3-inch drop in ride height, while the three-stage adjustable steel springs and shocks are managed by Audi’s ΩDynamic Ride Control system.

One thing I noticed in Dynamic mode is, at speeds under around 60 mph, there’s a fair amount of vertical motion, the RS 5 Coupe riding a little like a sine wave. Switching to Individual mode, and setting everything to Dynamic bar the steering – which I left in Automatic or Comfort – proved to be a quick workaround.

Otherwise, though, the driving dynamics of the new RS 5 proved more than rewarding. Smooth throttle response paired with neatly weighted steering help make this second-gen RS 5 Coupe one of the best gran touring two-doors money can buy. It’s on the heavy side, mind, so I didn’t expect to be able to throw it around like you would, say, a TT RS or the RS 3. Not to say it can’t be nimble, but the combination of tight switchbacks, straight line acceleration, and wide and fast sweeping turns demonstrated that there’s little that can unsettle the car, the steering, or the new engine.

Riding on the 20-inch tires which will be standard for the US market, it’s hard not to hear the road noise; that just comes with the territory on wheels that big. Still, given that the road conditions decidedly weren’t the best in Andorra, the fact that so little road or wind noise made it through into the cabin was impressive.

As for that cabin, if you opt for Sonoma Green Metallic paint it comes with black Nappa leather with matching stitching color in a honeycomb pattern. They’re combined with open-weave carbon fiber, while Audi gets the usual kudos for the authenticity of its materials at all the key touch points. Case in point are the climate control buttons: their brushed aluminum feels classy, and the touch-sensitive levers add a whole new dimension of sophistication that delights in daily use. 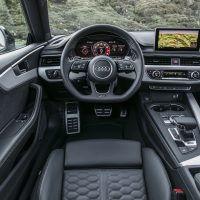 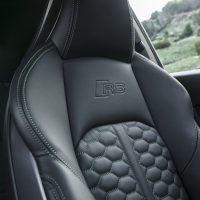 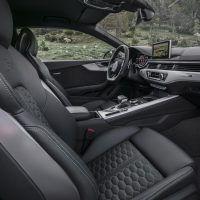 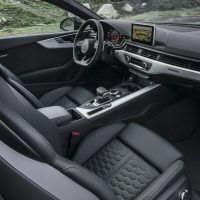 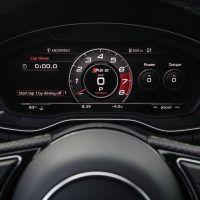 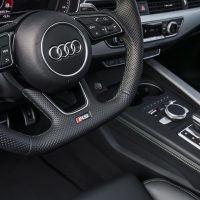 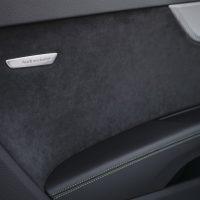 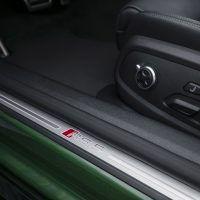 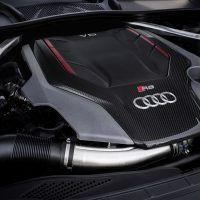 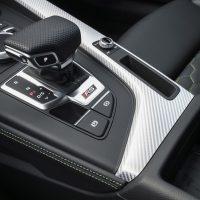 The driver gets Audi’s Virtual Cockpit, the all-digital instrumentation binnacle first introduced in the TT a few years back and, since then, available as an option on other Audi offerings. On the 2018 RS 5 Coupe, in the US, it’ll be standard-fit, and get a few RS-specific features such as the rev/shift indicator. When in manual shift mode, as the engine comes close to the limit, the center tach flashes up yellow and red bars suggesting that you should shift up immediately. Other RS-exclusive data includes a G-meter, tire temperatures, and horsepower and torque details.

In another first for the RS product line, there’s now a RS-specific mode for the head-up display (HUD). It provides basic info such as speed, engine oil temperature, and driving directions, but throws in the shift indicator lights too. It’s a nice – and useful – touch that differentiates the car from other models in the family. Speaking of the family, the kiddos riding in the back get almost an inch more legroom thanks to the 0.6-inch increase in wheelbase, while more compact sports seats also save space compared to the first-gen RS 5.

All-in-all, Audi’s bringing its A-game, and taking on the likes of the Mercedes-AMG C63 S Coupe. Personally, I’d class the AMG as a fairly over-the-top muscle car, whereas the 2018 RS 5 Coupe is more refined both in how it looks and how it drives. It’s a true gran tourismo, designed and engineered for long road trips, while still endowed with everything you’d need to drive briskly should the opportunity arise. As for comparing the RS 5 with BMW’s M4, while some might be tempted to cross-shop, I’d consider both cars to be different beasts altogether. If you’re in the market for a sleek, capable long-distance cruiser with a sporty soul, keep an eye out for the RS 5 Coupe to arrive stateside in the first quarter of 2018. Pricing is yet to be confirmed for the US, but expect things to kick off from around $70k.