The Q5 is hands-down Audi’s numero uno: its top-seller and, in my humble opinion, one of the best premium crossovers on the market today. First introduced back in 2008, the Q5 sold over 1.5-million in its first generation worldwide. Undeniably a home-run hit, then, and with good reason, an Audi knows just the buyer it’s selling to and what they want. Why mess with a winning formula?

The 2018 Audi Q5 is, therefore, the epitome of evolution not revolution. Instead of radically changing the SUV’s styling for the sake of change, it’s been elegantly massaged into the German automaker’s current aesthetic-of-choice. That doesn’t mean it hasn’t benefited from Audi’s latest technology, mind: you get the brand new quattro ultra, its 2-liter TSFI engine, Virtual Cockpit, newly redesigned front and rear lights, and a slew of safety features. 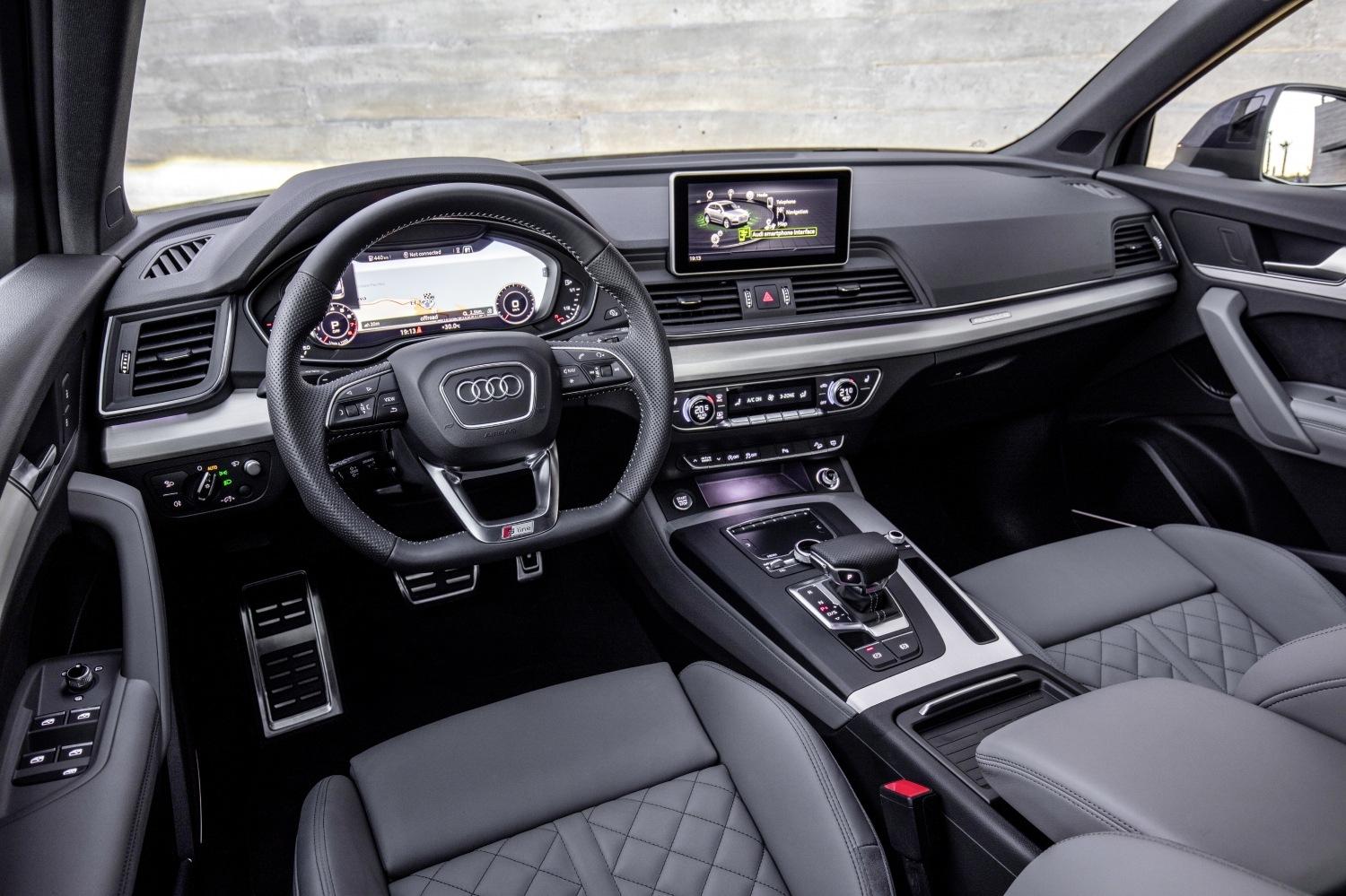 The 2018 Q5 isn’t the first model in Audi’s line-up to get quattro ultra – you could think of it as quattro 2.0 – but there’s no denying that it’s the true star feature of the new SUV. In development for six years, the all-wheel drive system is all about maximizing real-world performance and trimming away at any compromises you might typically expect when all four wheels are driven. That means it’s both much more efficient and blessed with an AI-like prescience for when you’ll need all-wheel drive.

If you remember nothing else from this section, remember this: the new system increases fuel economy, engages all-wheel-drive before you even know you need it, and switches to two-wheel drive when you don’t.

Audi re-engineered how the rear wheels engage and disengage, to prevent the rear differential and prop shaft from spinning even when all-wheel drive isn’t required. That doesn’t’ sound like much on paper, but for it to happen the clutch in the rear axle differential must be completely decoupled, allowing the multiplate clutch to send all available torque to the front wheels. When the software detects that all-wheel-drive is necessary, the multiplate is first to re-engage, followed by the prop shaft and rear differential, and the rear clutch connected to the rear wheel. 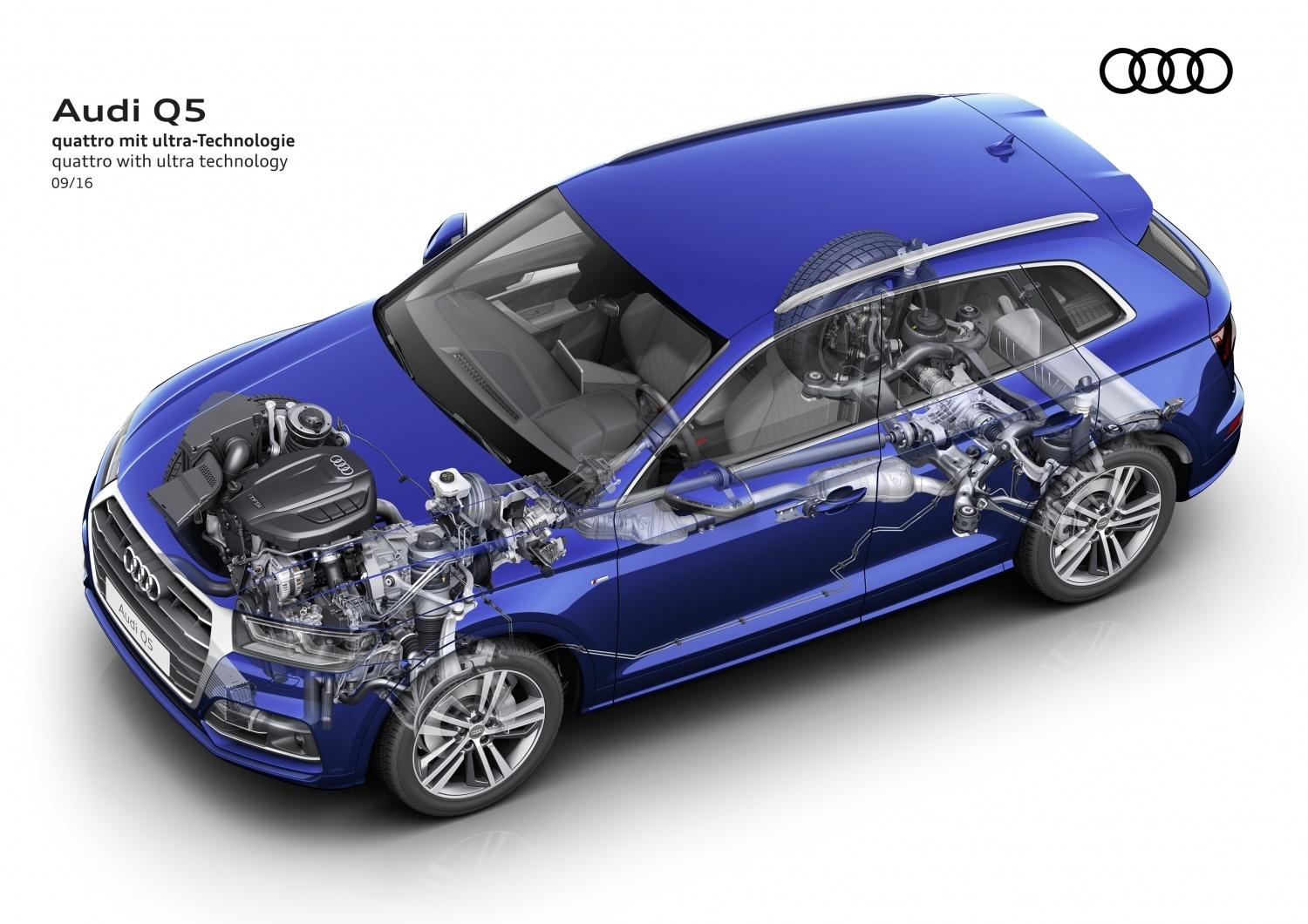 This all happens within 200 milliseconds, and without the driver or passengers ever knowing about it. Where the prescience comes in is in how the system scans road conditions up to 500-milliseconds ahead, giving the system plenty of time to engage. We’re talking scant fractions of a second, here. For instance, if you compare that to how long it takes a $450,000 Lamborghini Aventador to shift gears, which happens in 50 milliseconds, Audi is completely engaging or disengaging an entire drivetrain in just four times as long.

Honestly, though, don’t concern yourself with the “how” other than that the new system is working thanks to all its sensors proactively. On my drive, we tempted fate and stopped on a sandy beach. If you’ve ever driven a car or SUV on sand, it’s an experience you won’t soon forget and yes, it generally involves a tow truck of some sort. I’m speaking from personal experience.

That said, I couldn’t help but be blown away by how the software instantly detected the need to shift everything into all-wheel drive mode – all systems engaged! Per the connected iPad to the onboard system, I could see how quickly the system detected the terrain and instantly engaged the system with absolutely no wheel spin.

In the video below, you can see when the Q5 is in all-wheel drive or front only. By default, for best tire to ground grip, all-wheel drive is on by default, indicated by the red icon. In normal conditions, with only the front wheels engaged, the indicator switches to white. Even when I tried to trick it – slowing down to around 50 mph and then abruptly speeding off in a straight-line – regardless of which Drive Select mode I was in, the Q5’s brain switched over to all-wheel drive for best traction.

According to Audi’s engineers, quattro often kicks in during straight-line acceleration so as to prevent torque steer, since otherwise, the power could overwhelm the front wheels. Drivers of production cars won’t see it, but Audi had added a circular chart showing how much grip is required: the larger the circle, the smaller the amount of grip required. When we entered the sandy beach area, as you will see in the video below, the circular indicator zips down to almost nothing.

It’s not the only thing the Q5’s systems are quietly doing in the background. At any given moment with you behind the wheel, you’re being profiled as either a “dynamic” or “economical” driver, helping to determine when to engage quattro in addition to whichever Drive Mode select you’ve switched to. In the case of our light-off-road adventure, Off-Road mode select was the preferred mode, so the all-wheel drive was engaged the entire time. At no point in the drive did I feel that the Q5 was slipping or out of control, even though we were driving at a brisk pace. For the most part, I only engaged in all-wheel drive less than 18-percent of my entire drive. Had we tested the Q5 in wet, icy, or snowy conditions, I’d imagine that chart to look drastically different. 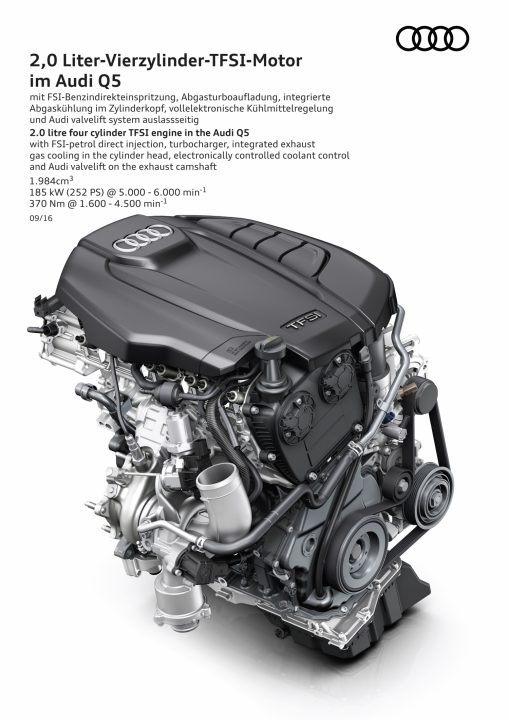 For the most part, the engine’s performance is stellar and should be more than enough for the targeted buyer. Well-balanced in vehicle weight to torque and horsepower, according to Audi it’ll be faster at the 0-60 mph run, too, taking 5.9 seconds versus the 7 seconds of the outgoing Q5. That’s also thanks to a switch to extra weight-saving materials.

According to Audi’s new quattro system, I’m rated a “Dynamic driver”; if I were in the market for an Audi mid-size crossover/SUV, I’d probably opt for the SQ5 with its larger, 3.0-liter V6 shared with the upcoming S5. The 2.0-liter happily gets the job done, but the V6 gets you going quicker. Another difference is that, while the Q5’s steering ratio is fixed – and optimized for everyday driving comfort – the SQ5 can be had with optional Dynamic Steering. For $1000, the SUV tracks how fast you’re driving and the steering angle, to determine the adjustable stiffness and rate of the steering. 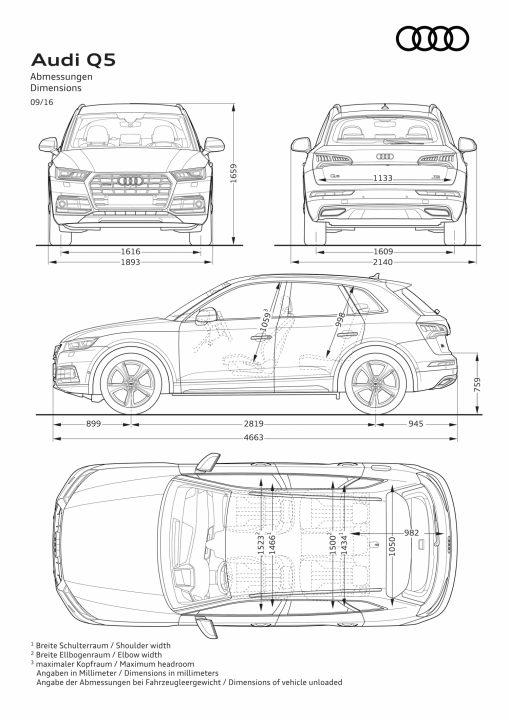 Outside, the new Q5 is ever so slightly longer than its predecessor, while retaining the same width and height. I dig the lower front hood line and single shut line, linking the hood to the front quarter panel, which bulges out slightly for a more aggressive stance. That single character line continues to snake all the way down the mid-section, flowing toward the back and bulging out in the process, visually accentuating the quattro drive. Audi’s signature “Singleframe” grille, meanwhile, has finally made it to the Q5. 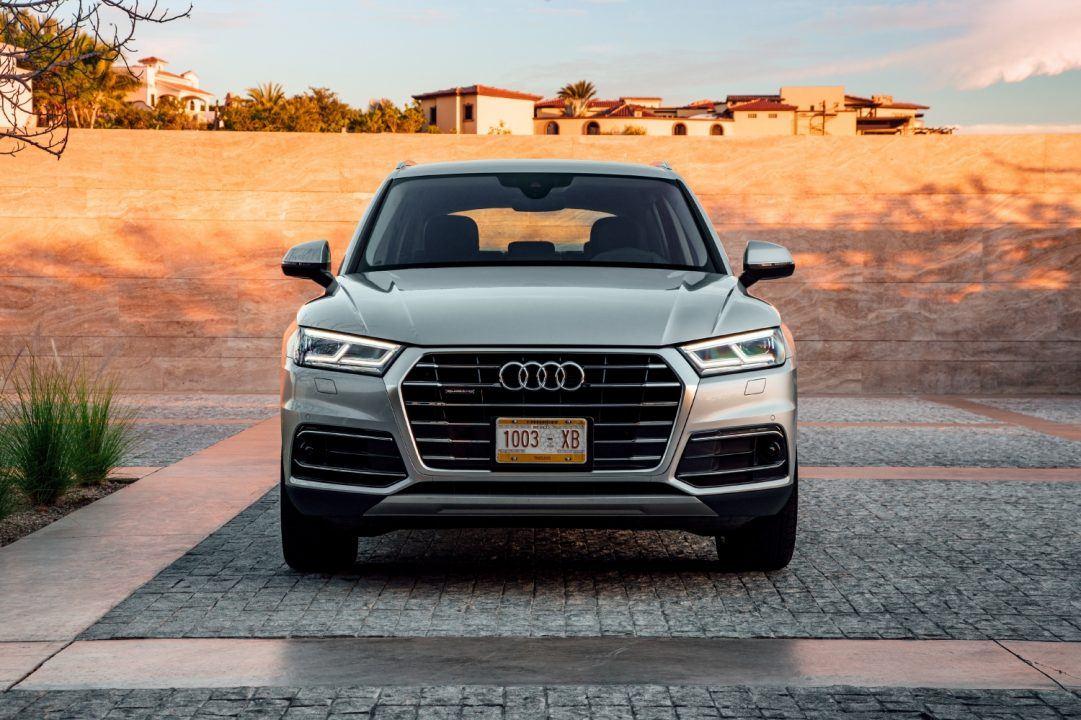 Audi was generous on drive and ride time, long enough for me to get a sense of the updated cabin. Since seat feel makes such a difference – especially if you’re bouncing around off-road – they’ve gained new contouring for the 2018 model year, leading to a snugger fit while staying extremely comfortable for longer road trips. Otherwise, cabin layout is clean and Germanically luxurious; by dropping the dashboard lower, and slimming the roof pillars, you get a feeling of a roomier space, and it’s noticeable. 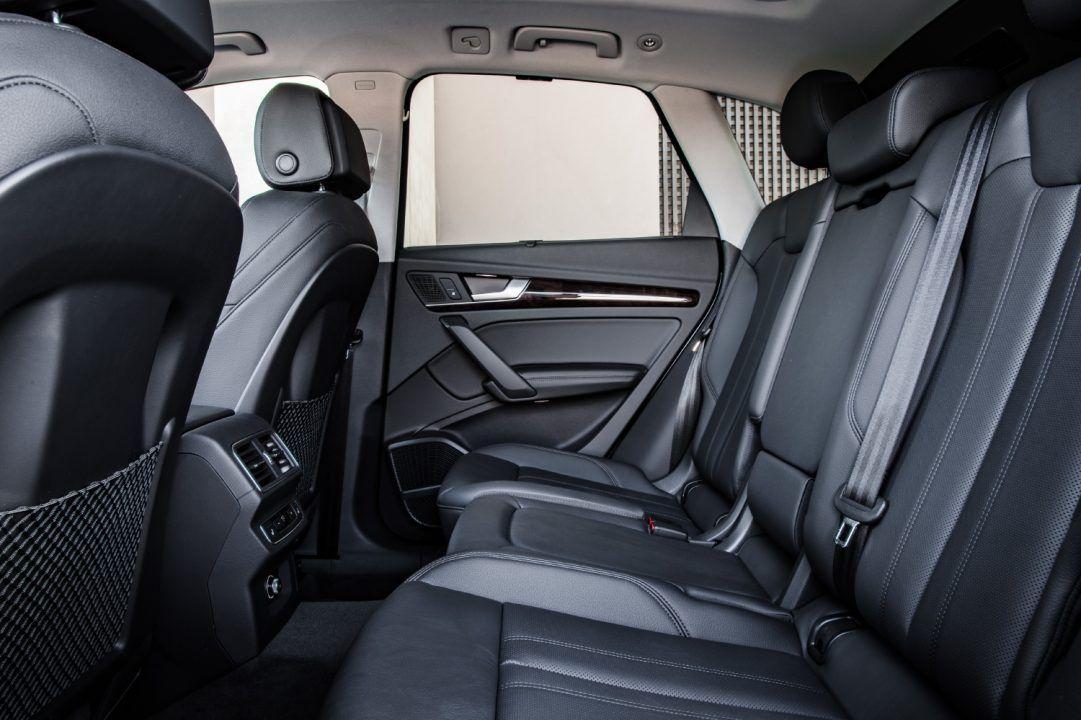 Looking around the cabin, aesthetically, it’s nicely trimmed out with premium materials for the key touchpoints. The buttons and touchpad click firmly; the glossy wood trim looks great; and, most important for music lovers, the optional 19-speaker, 755 watts Bang & Olufsen audio system sounds good enough to amp up a dull commute. The 28.7 cubic feet of cargo space – accessed with a standard-fit power tailgate – expands to 60.1 cu.ft with the 60/40-split rear seats folded. As for the rear, with an extra 1/2-inch of legroom there’s enough space right behind the driver’s seat for me – at 6’2″ – to sit comfortably, without forcing the driver right up against the steering wheel. 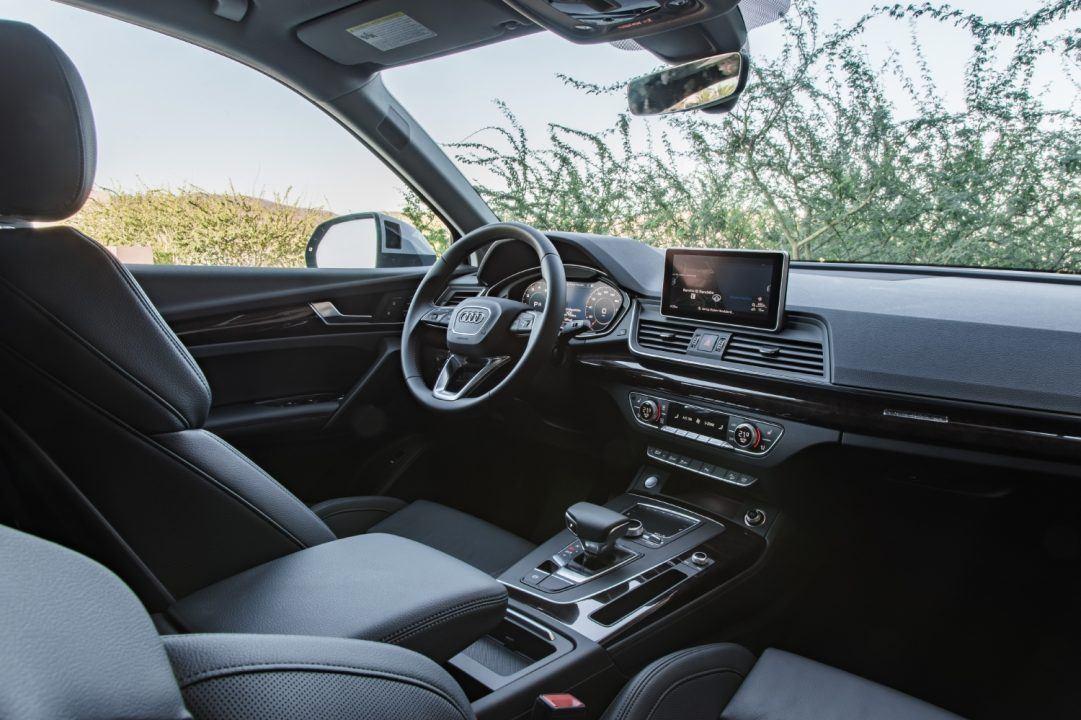 That would at least put them up close with Audi’s excellent Virtual Cockpit, now offered as an option on the Q5. Spend a little time in front of it and you’ll agree that analog gages are very much yesterday’s tech: the customization of the LCD not only allows for pertinent information such as a high-resolution Google Earth map with turn-by-turn directions but switchable views to suit each drive. Everything can be navigated by controls on the steering while, while the center display is managed by a touchpad in the center console. Between Audi’s Virtual Cockpit and the center display, I still think this system is one of the best infotainment layouts in the industry.

US pricing for the 2018 Q5 is still yet to be announced, as are its package options. For the sake of simplicity, the Virtual Cockpit – once part of the Technology Package in other Audi models – has now been rolled in with the Navigation package. Audi pre sense basic and pre sense city are standard, with Premium Plus and Prestige trims fitted with Driver Assistance getting extras like side-assist, rear cross-traffic alerts, turn-assist, adaptive cruise control with stop & go, traffic sign recognition, and more. 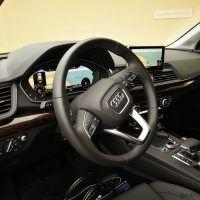 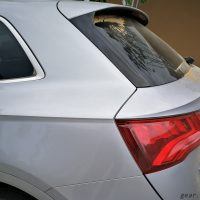 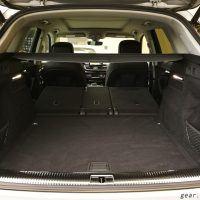 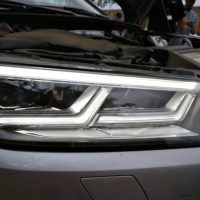 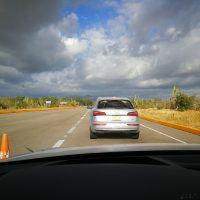 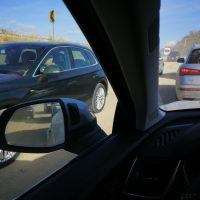 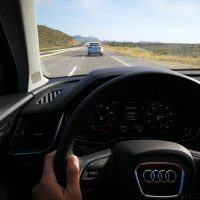 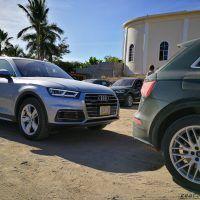 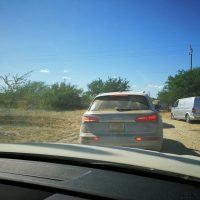 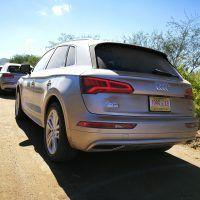 The all new 2018 Audi Q5 goes on sale in the spring of 2017, and if you’re patient enough to wait around, the SQ5 with its larger 3.0L engine will hit the market later in the year. All in all, the new Q5 not only lives up to the outgoing Q5 in every respect, it should far exceed new buyers’ expectations across power, performance, ride handling, and luxury. More importantly, the slew of safety features and the new quattro with ultra technology have a significant and noticeable impact on how the new Q5 handles things on and off the asphalt: it’s more than capable of going off-road, should you be feeling adventurous. Audi may not have opted for revolution, but Darwin himself couldn’t argue with the well-rounded, stylish mid-size SUV that the 2018 Audi Q5 has evolved into.