Low-speed cruising down the Promenade des Anglais in the Mercedes-Benz S550 Cabriolet we’re a spectacle, as well we should be — top-down, sun ricocheting off 14-spoke 20-inch AMG wheels, two figures lounging back in white Nappa leather Designo seats with pillow-top headrests. I’d look at us, too.

On this stretch of the Mediterranean, the sights go far beyond the shimmering sea. Other-worldly light and Easter-egg pastel edifices share the stage with some of the greatest gems of the pursuitist class. We happen to be in one, as it turns out. Be forewarned, if you spend even one minute in the Mercedes S-Cab, you’ll dislike whatever other car you drive. Like, whatever car. Any car. Yes, even that one. For starters, the interior of the very loaded model we’re driving looks like a futuristic concept car, and is considerably nicer than some of those, even. 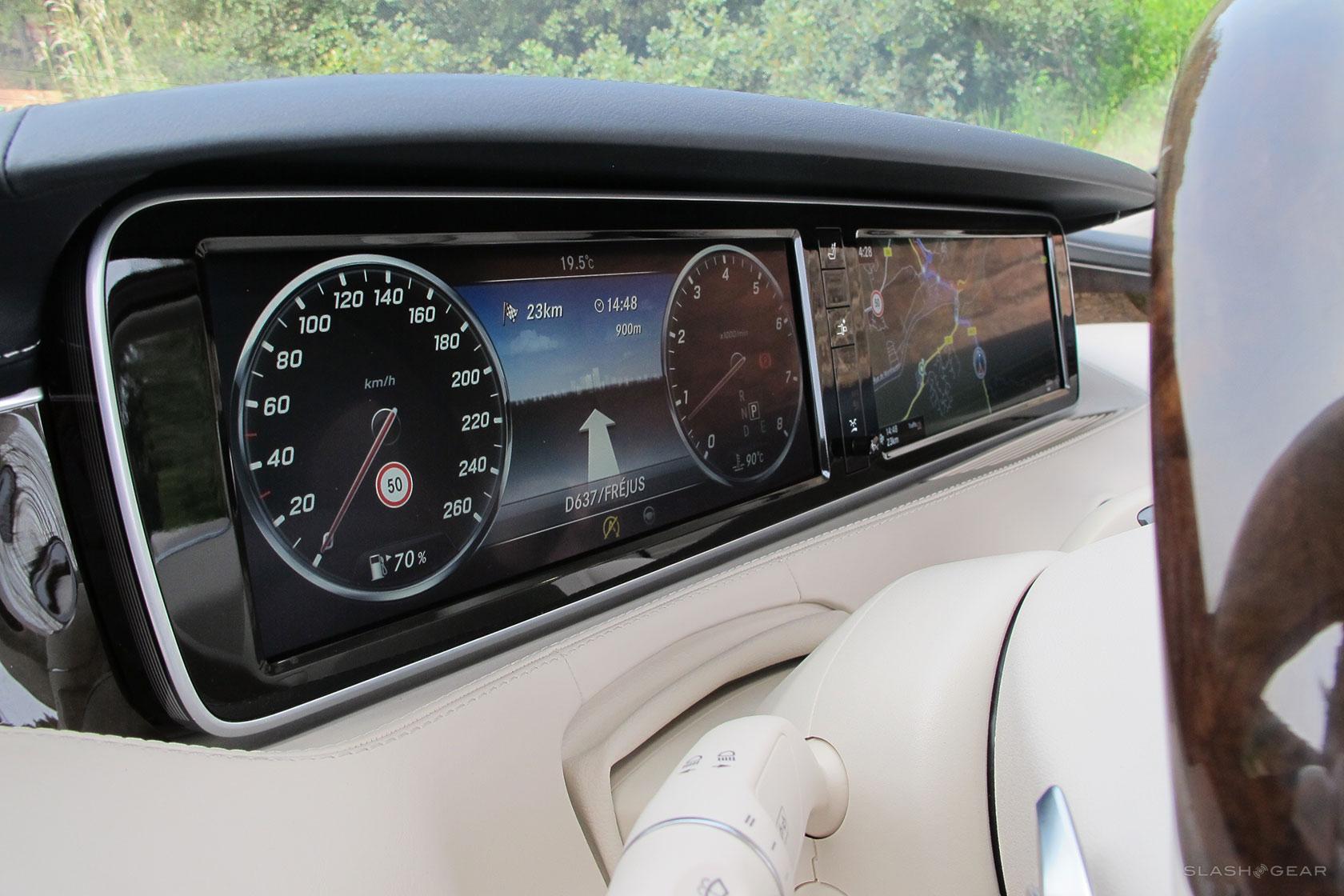 Two 12.3-inch high-res screens communicate most everything you need to know. There’s a scroll-wheel and touchpad that essentially do the same thing, allowing you to choose whichever you prefer. The memory seats wrap you, warm you, cool you, they blow warm air on your neck — you needy, coddled muppet — and they even massage you. A new fragrance, Pacific Mood, perfumes the air in this, the sixth variant of the flagship S-Class. For the record, it’s light, fresh, and a touch sweet, but I can’t actually decide what it smells like. Regardless, it’s pleasant and subtle.

If the devil is in the details, our S550 is positively oozing with sin. Stuttgart’s engineers must’ve gotten pretty bored, because they’ve seemingly looked to every square inch to make sure it’s as optimized and as clever as it can be. The windshield wipers – that’s right, the wipers – would probably get a higher score on their SATs than your precious, Stanford-bound prodigy. While wipers on most cars clear the windshield and help you see when it’s raining and snowing, Benz’s brass thought there simply must be a better way. Shockingly, there is. 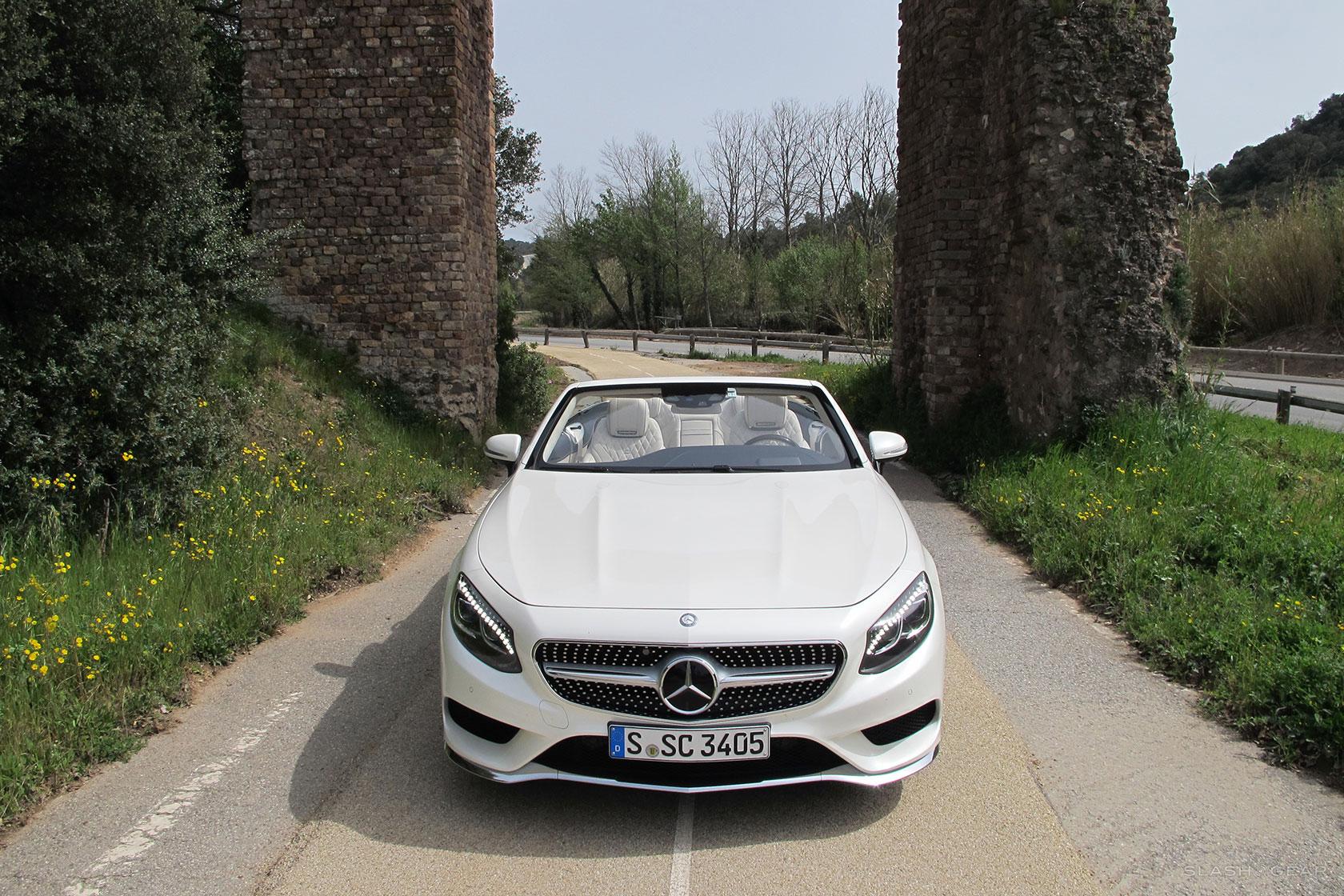 It’s called Magic Vision Control, and it basically uses “water guides” to eject wiper-fluid directly from the blade to the windshield while the blade is in motion. Instead of the positively traumatic old-school spray temporarily covering your field of vision until the laggard wipers can rally, here the windshield is cleaned with you almost never seeing the water. Magic.

The blades even calculate car speed, temperature, and whether or not the top is up, and adjust the power of the spray accordingly. Of course, they’re also electrically heated so that the blade won’t stick to the windshield in winter. 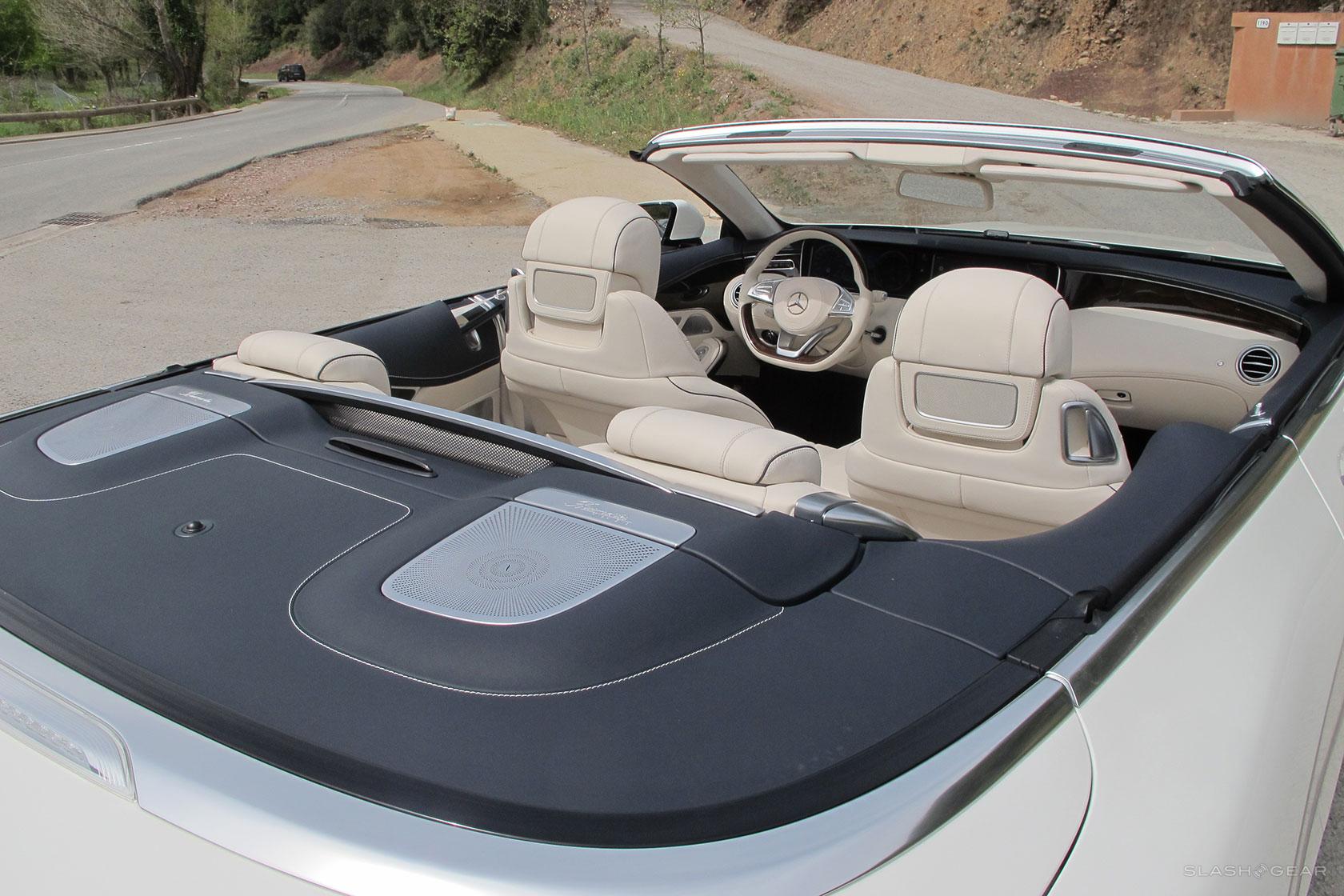 Like every S-Class, the Cabriolet is long and wide — a commanding 16.5 ft by 6.23 ft — and the convertible shares those long S-Coupe doors. Similar ergonomics apply inside in the cabin, only a three-layer top keeps things quiet when you want the roof, while the sky is literally the limit when you don’t.

Currently there are two main S-convertibles to choose from: the S500 Cabriolet — which gets named the S550 in America, because Americans like the idea of more, even if it’s actually the same — and the S63 Cabriolet, which really is more, for people that want extra oomph from Benz’s Affalterbach, Germany, performance arm. For those that like the sportier look of the AMG, but don’t want to spring for the extra power and performance, you can opt for a model like the first one I drove, an S550 with the AMG Design package. 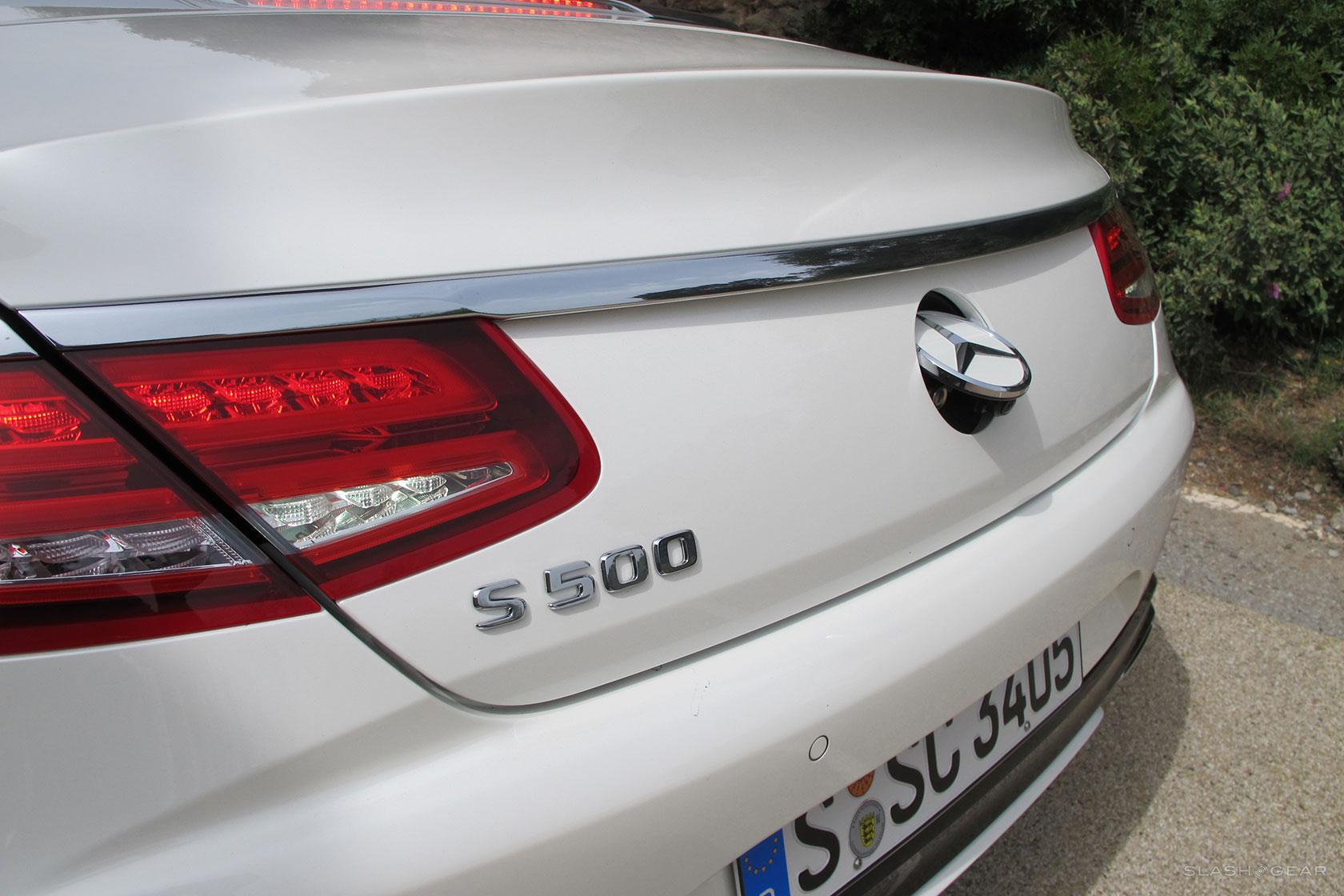 Later in the year the Mercedes-AMG S65 will arrive, immediately taking the top spot by not only upping performance but also adding a bigger mill. While the S550 convertible’s 4.7-liter Biturbo V8 is good for 449 horsepower and 516 lb.-ft. of torque, the AMG S63 Cabriolet utilizes a much brawnier 5.5-liter V8, rated at 577 horses and an absolutely bruising 664 lb.-ft. It’s predictably quicker, too. The S550 hits 60 mph from rest in 4.5 seconds — definitely impressive in its own right — while the S63 does it in a eyebrow-raising, supercar-fast 3.8 seconds. That’s a lot of luxurious heft to push that quickly.

The S-Class Cabriolet’s top speed is electronically limited to 155 mph, but not so on the S63 Cabriolet, which boasts a 186 mph ceiling, the same as the S65 Cabriolet. And while both of these cars — and respective V8’s — are mated to Benz’s new 9G-Tronic automatic transmission, the S65 Cabriolet gets AMG’s seven-speed setup. That bigger 6.0-liter 12-cylinder block cranks more power and torque, 621 ponies and an assaulting 738 lb.-ft. of torque, but is actually a blink slower than the S63 AMG to 60 mph, taking 4.0 seconds to hit the mark. That’s in part because the S63 is the only one that has Benz’s 4Matic all-wheel drive, while the other two count on rear-wheel configurations.

All the numbers and luxurious touches are well and good, but what’s it actually like on the road? That question is getting increasingly more bizarre to answer. Until recently, you could analyze and pin down a car’s character, faults and particular strengths. With air suspensions, adaptive steering, throttle response and more that can now be changed with the click of a dial, it’s getting decidedly more difficult to gauge. The S-Class Cabriolet is no exception. It’s like 10 cars (more even), in one.

The different drive modes really are distinct, too. Once out of Nice’s traffic, we climbed into the fairytale hills. While the lanes were narrow, they were also delightfully curvy, beckoning the S-Cab’s sportier side. And here’s the trick: somehow, this gracious cruiser immediately turned menacing bruiser. Acceleration was faster, exhaust throatier, steering tightened; a lot of weight dancing through a slalom. The effortless nature and abundance of performance makes one (foolishly) question the necessity of the AMG. Of course, that changes the first second you start up the Affalterbach-tuned sled.

The S63 Cabriolet is really hard to fathom. Its dimensions swell marginally, but its character is altogether different. Power is on tap immediately and throughout the range, the turbos spooled to scream: plant your foot down and you might think a Boeing 747 is missing a turbine somewhere. The larger brakes and rotors — as we found out — are capable of cutting a blur of speed down to earthly levels fast. 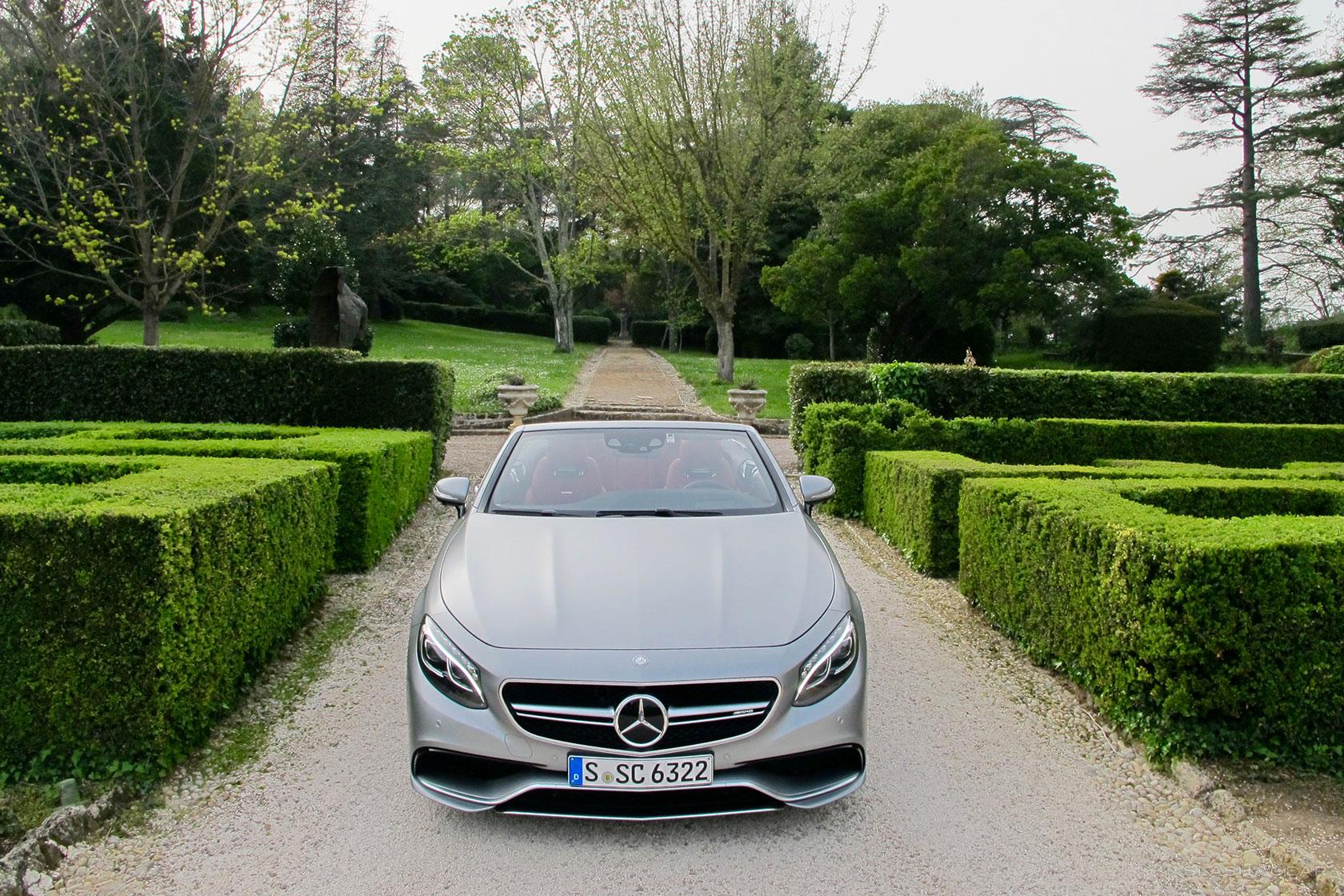 The same sensors that allow for Benz’s Distronic Plus — an awfully named, highly advanced semi-autonomous driving system — also engage Pre-Safe’s collision avoidance and mitigation. If you’re coming in too hot, the cameras, radar, and sensors will cue the system to engage the brakes if it appears an accident is imminent.

Hopefully you’ll never need to experience it in a real world situation (we did), but it’s an insurance policy that ultimately is necessary when you pilot a land-yacht that wants to swallow the road whole. 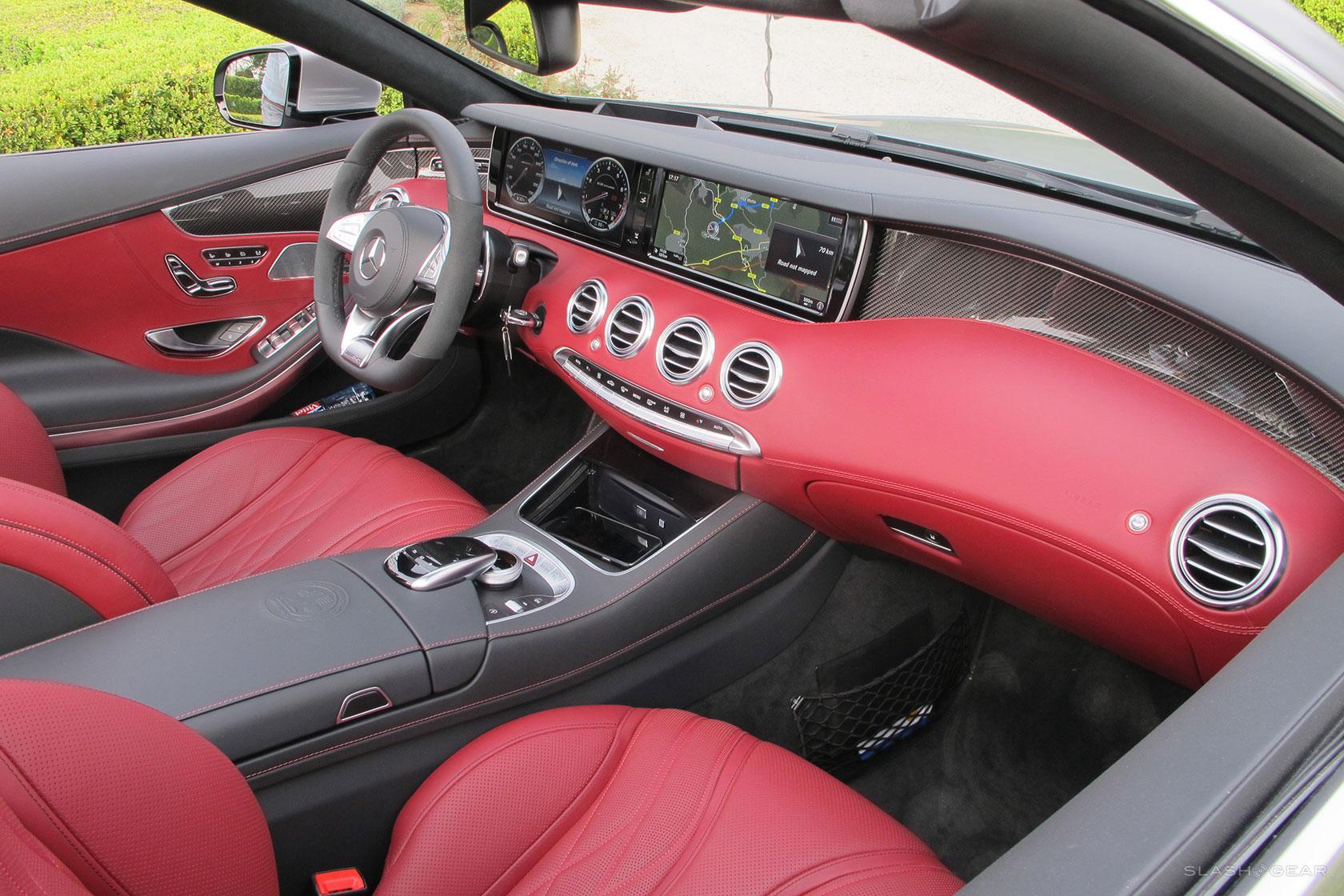 The Mercedes-Benz S-Class Cabriolet, and Mercedes-AMG S63 Cabriolet represent the pinnacle of open-air luxury, performance, technology, and comfort. Building on the winning formula of the S-Class — tally all of the sales from the competition, add them together, and that figure is still well shy of the S — the cabrios take the alluring styling of the S-Coupe, and peel back the top (only to put it back on in under 20 seconds, and at speeds up to 37 mph).