Hyundai’s Ioniq initiative is more than just a green flare rising up from the sea of increasingly electrified automotive options. The decision to introduce a family of not one, not two, but a trio of new environmentally-friendly automobiles – the Ioniq Hybrid, the Ioniq Electric, and later this year, the Ioniq Plug-In Hybrid – is the second wind for Hyundai’s self-celebration as a major automotive player after last year’s launch of the Genesis luxury sub-brand. In many ways, this eco after-party is even more significant than the Genesis project, given that the premium market promises eventual profits. No one, it must be noted, makes anything resembling real money on hybrids and EVs, which means that Hyundai is building these cars in large part to demonstrate to the rest of the world that it can afford to do so – and do so comfortably.

Lest you think that’s a knock against either Hyundai’s intentions or final product, let me be clear: after having driven two-thirds of the Ioniq line-up I can confidently state that none of these cars are mere green-washed window-dressing. The automaker set itself the lofty goal of surpassing the Toyota Prius, (the lone, strange king of hybrid sales volume), in several important areas, and the resulting technological investment (12 years in the making) has borne impressive fruit. After all, if you’re going to aim for a target, aim high, because that way even if you miss the Prius you might still end up tagging a disgruntled Honda Insight owner. 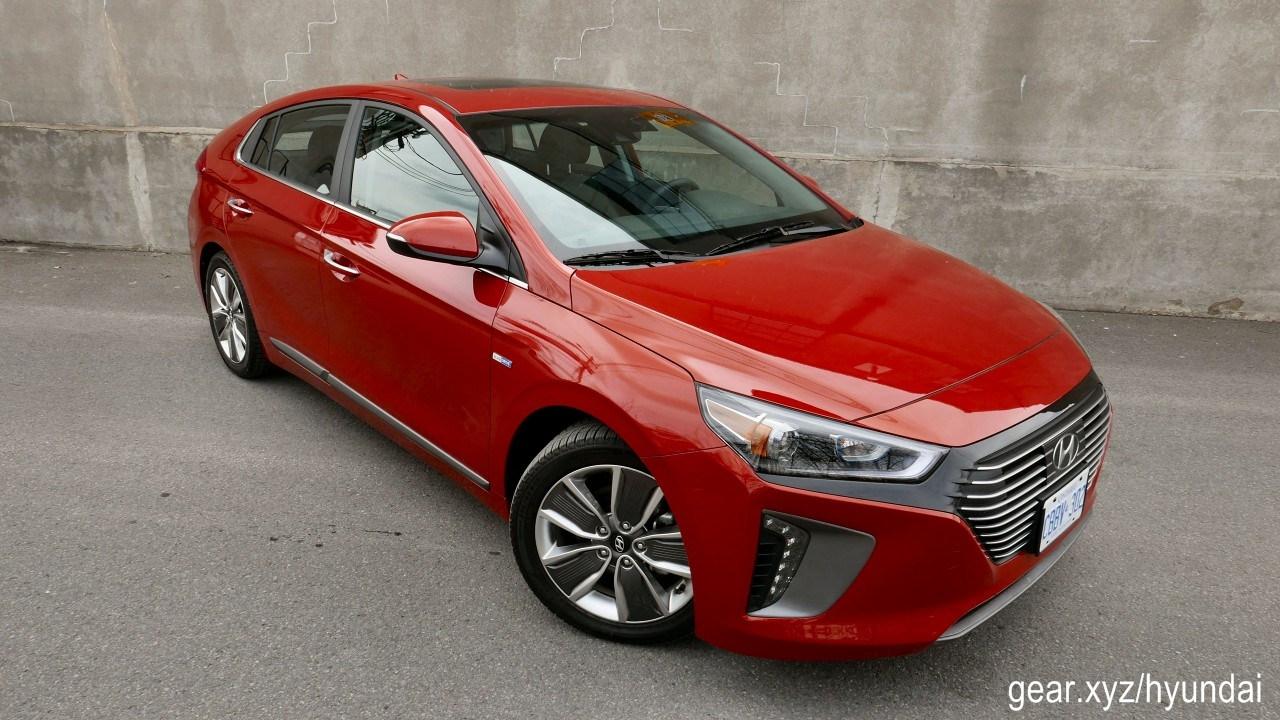 Of the brood, the member most likely to succeed in finding an audience with paying customers is the 2017 Hyundai Ioniq Hybrid, in part due to it being the most conventional. It’s engineering ground that Hyundai has tread before – a small, four-cylinder gas engine linked to an electric motor integrated with the transmission’s output shaft – but never in so tight a package, and not using the unique bundle of components offered by the compact hatchback. The Ioniq Hybrid’s 1.6-liter four-cylinder gas motor is matched with a six-speed dual-clutch automated manual gearbox, and alongside its exceptional thermal efficiency it makes possible 139 combined horsepower and a respectable 195 total lb-ft of torque. Fuel economy is listed at a Prius-tweaking 58-mpg combined when found in the lightweight Blue base trim, an achievable number that I might have gotten closer to in warmer weather.

For those who make their hybrid buying decisions based solely on efficiency, that’s probably enough to steer them into the Ioniq’s clutches. For the rest of us, Hyundai has made the smart decision to go exactly opposite of Toyota in terms of the hatchback’s styling and driver experience. The Ioniq looks very much like what one would expect from a small hatch, and its normcore sheet metal reflects the no-nonsense attitude associated with its ergonomics. There’s no vestigial shifter stalk or button play to be found here: if you’ve ridden inside any other Hyundai under $30,000, then you’ll be familiar with the car’s control set and cabin layout which are straightforward and perfectly acceptable. If you’re looking for your hybrid to make you feel special, or pat you on the back for your green buying decision, well, there are likely better options out there for you.

The Ioniq Hybrid does its best to leverage battery power in normal driving, with the electric motor whirring away under your right foot until you surpass city cruising speeds, upon which the gas engine smoothly kicks in its half of the bargain. Braking is regenerative, and represents more of a learning curve than the throttle, as it’s not always easy to know when to push past the kinetic converters and tap into the ‘we need to stop right now’ functionality found in non-hybrid cars. There’s a sport mode if you care more about harnessing the electric motor’s instant torque than saving fuel, and handling is perfectly in keeping with the modest expectations of the compact hatch segment. 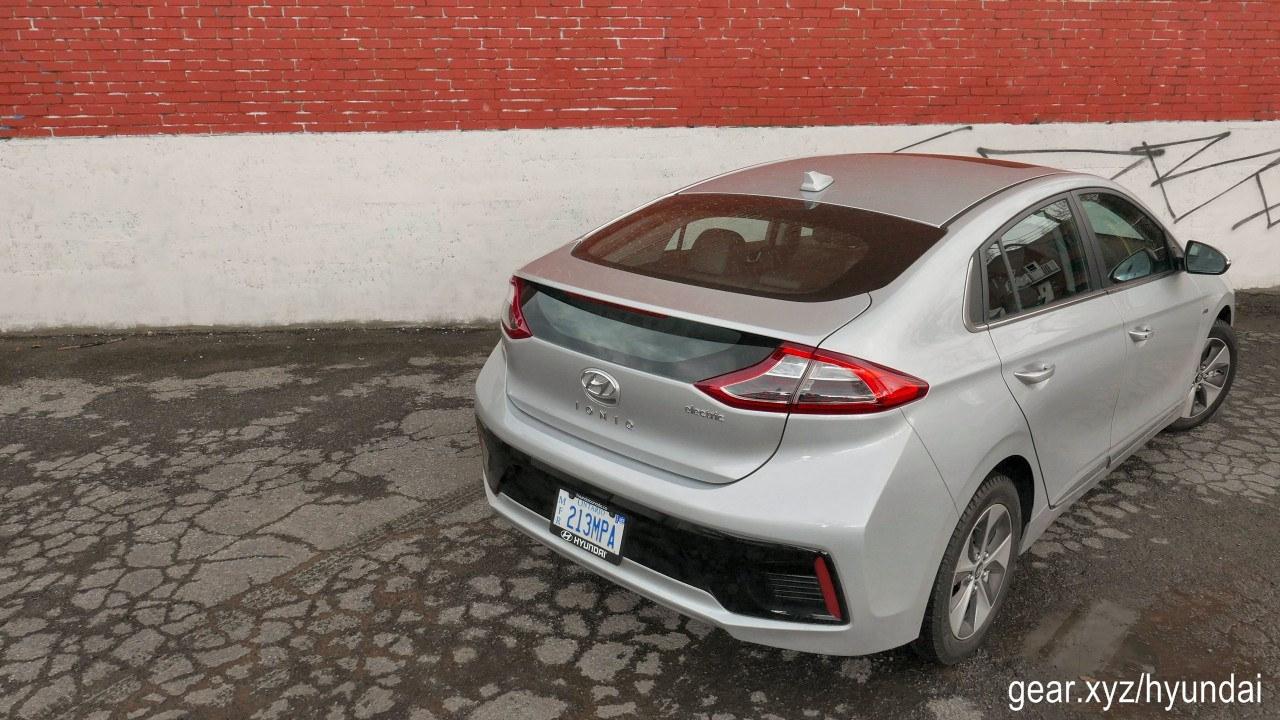 Should you wish to avoid the taint of hydrocarbons completely, the Hyundai Ioniq Electric is you almost identically-styled alternative. Set apart from the Hybrid model by way of a badging and a few small tweaks (including LED lights up front, a black plastic grille cover, and its own unique tail lights), there’s little to suggest to the passing public that this Ioniq sips electrons rather than sweet crude, keeping it in sync with Hyundai’s understated, results-oriented approach to its electric car strategy. Once inside, you notice push button controls for the transmission in place of the standard gearshift, but the rest of the cabin – even though it’s replete with sustainable, organic, and perhaps even vegan materials – stops short of boasting about its eco-cred.

The Electrics’ drive feels no less than the equal of the Hybrid, thanks more to the 215 lb-ft of torque than the 118 horsepower generated by its electric motor. The car feels quick and competent around town, and even highway passing is silently effective. Hyundai has added an interesting wrinkle to the Ioniq Electric’s ability to recapture energy while braking in the form of a pair of paddles located behind the steering wheel. They offer full control to the driver over how aggressively the system intervenes when lifting off the accelerator, and the range taps easily from vise-like to Astroglide. 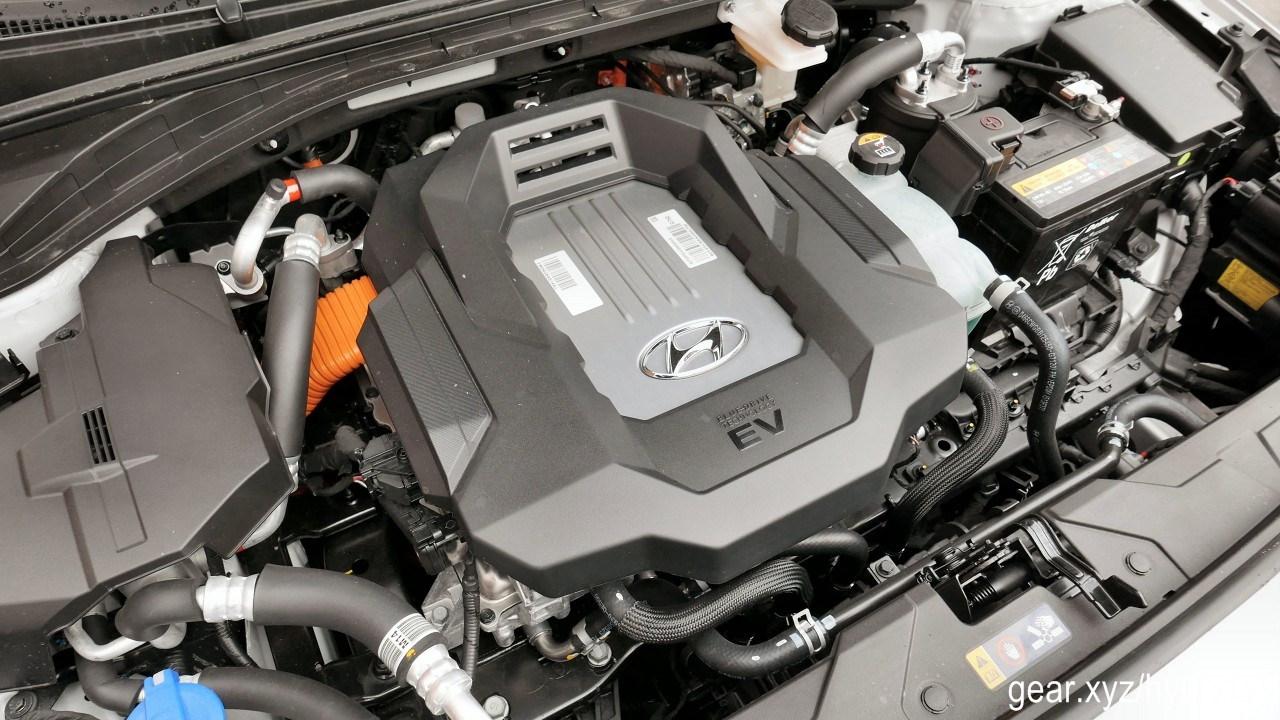 Unfortunately, the Hyundai Ioniq Electric hits the market at the same time as the Chevrolet Bolt, a similarly-sized EV that bests it not just in terms of power but also in advertised ranged. The Bolt’s 238 miles of cruising are so far ahead of the 124 miles that can be squeezed from the Hyundai’s 28-kWh battery pack that it shunts the latter into city car territory, where it joins every other EV not currently wearing a Tesla badge in terms of day-to-day practicality. Even with the admirable ability to stuff 80 percent of that range into its power pack after spending less than 30 minutes suckling from a 100-kW DC fast charger (and 4.5 hours to full on a 240-volt connection), there’s still no argument that can be made for choosing the Ioniq over the Bolt for anyone who wants to be able to leave a major metropolitan area on a regular basis.

Save for one, perhaps: price. Hyundai is keeping the Ioniq Electric’s MSRP at just above $30,000, and that’s before any state incentives aimed at electric vehicle buyers which could slice thousands off the sticker. This is cheaper than the Bolt, albeit for more modest functionality, and while it could entice more than a few bargain hunting pipeline-cutters it’s a safe bet that the much more useful Ioniq Hybrid – which starts at a much lower $23,000 ask – will be the volume seller of the two. That being said, with fuel prices still seemingly anchored to the floor, maybe it would be best to put the word ‘volume’ in air quotes, because as good as these two battery-motivated models are, hybrids and EVs seem destined to remain a niche until the next energy shock.