There are three things you care about when hurtling towards a left-hand hairpin corner at 130-mph: grip, brakes, and more grip. Almost everything else in the universe vanishes to an impossibly small point when faced with the very real demands of shrinking asphalt, a retaining wall, and 3,300 lbs of accelerated metal. You’re not thinking about your job, wondering whether you remembered to pay the electric bill, or mentally re-ordering the films in the Fast and Furious franchise according to progressive levels of both baldness and perspiration on the part of its leads. It’s just you and the immediacy of the physics you’re juggling with one hand on the wheel, the other clenched around the shifter, and both feet cycling the pedals like the Tour de France if PEDs were finally made legal.

Maybe I should back that up a bit, because it turns out that it actually is my job today to make sure that the 2017 Chevrolet Corvette Grand Sport that I am driving traces a route on its built-in GPS lap timer that is identical to the track map at Atlanta Motorsports Park, which is located just a few minutes outside of Dawsonville, Georgia. The same rolling hills and twisting roads that gave NASCAR legend Bill Elliot the teenage training he needed to become the first million-dollar winner the series had ever seen now serve as the proving ground for Chevy’s latest high performance spin-off of the lauded C7 Corvette Stingray. 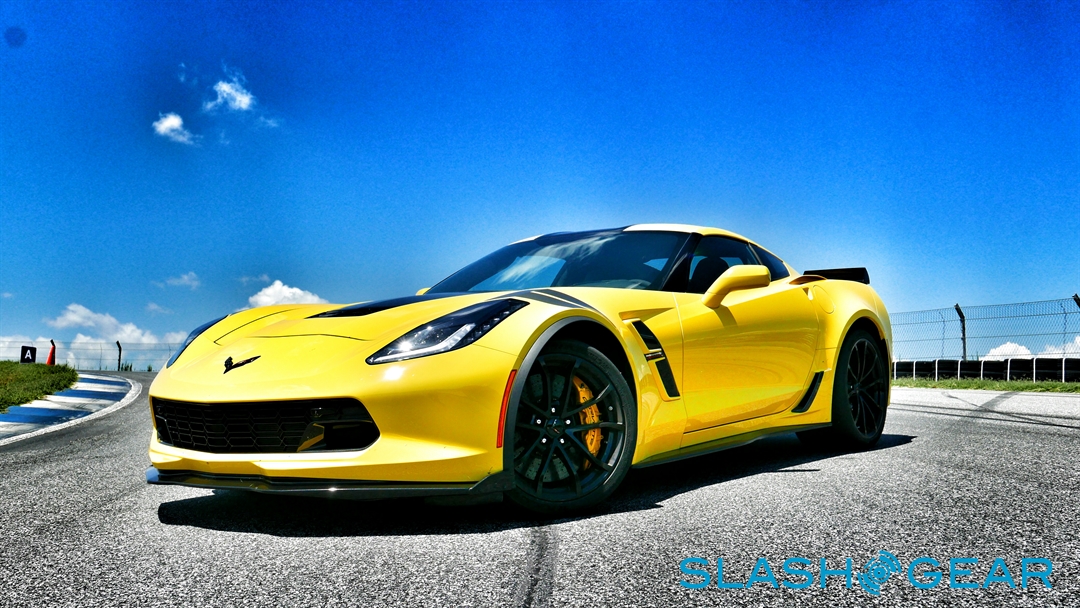 AMP sits on land that was purchased from the Elliot family, whose race shop still resides five miles down the road from the still-new facility. It’s hard to think of a more appropriate test of the Grand Sport’s track-focused capabilities than the plunging elevation changes and sharp corners separating the high speed sections of this particular road course. It’s the kind of circuit that would be an absolute delight in a low-mass momentum car, or, as one of the Corvette’s engineers explained to me earlier that day, if you decided to treat the two-door Chevrolet like it weighed half as much and just hold on for dear life. 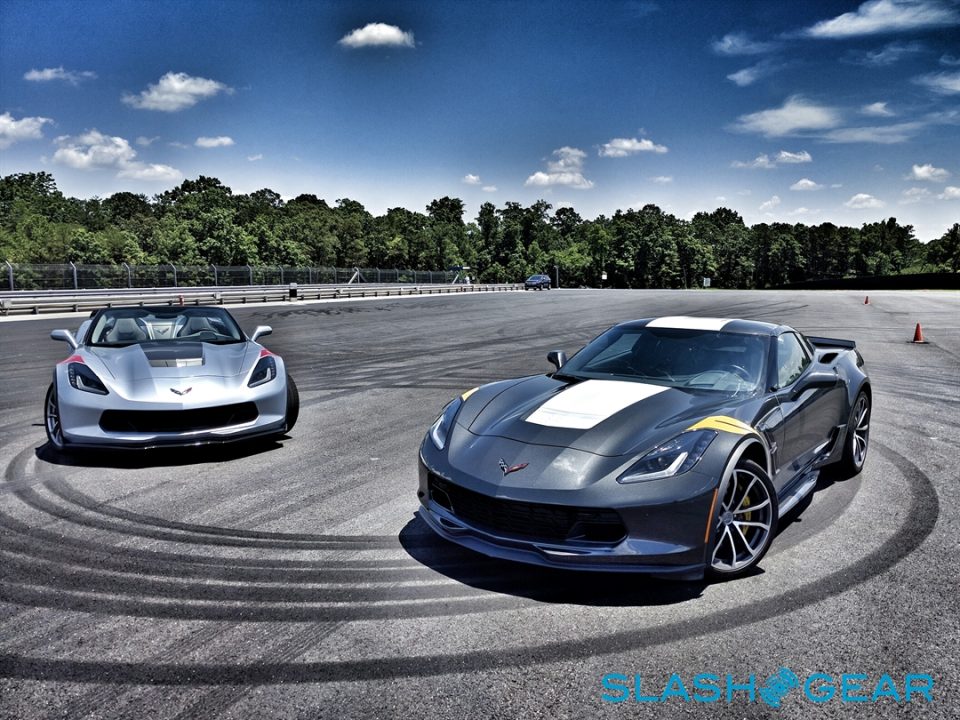 From the outside the 2017 Chevrolet Corvette Grand Sport’s place in the line-up might seem a bit muddled. After all, doesn’t the Corvette Z06 already call down the thunder on any race track in country with its 650-horsepower supercharged V8 and carbon fiber aero package? That is indeed correct, but the window sticker for what has become GM’s in-house supercar has expanded to eclipse the means of traditional Corvette buyers interested in weekend motorsports shenanigans. This has created space in the showroom for the Grand Sport, which, as it did with the previous-generation C6 ‘Vette, crams high performance content onto the same basic platform as the entry-level model at a fairly reasonable price. 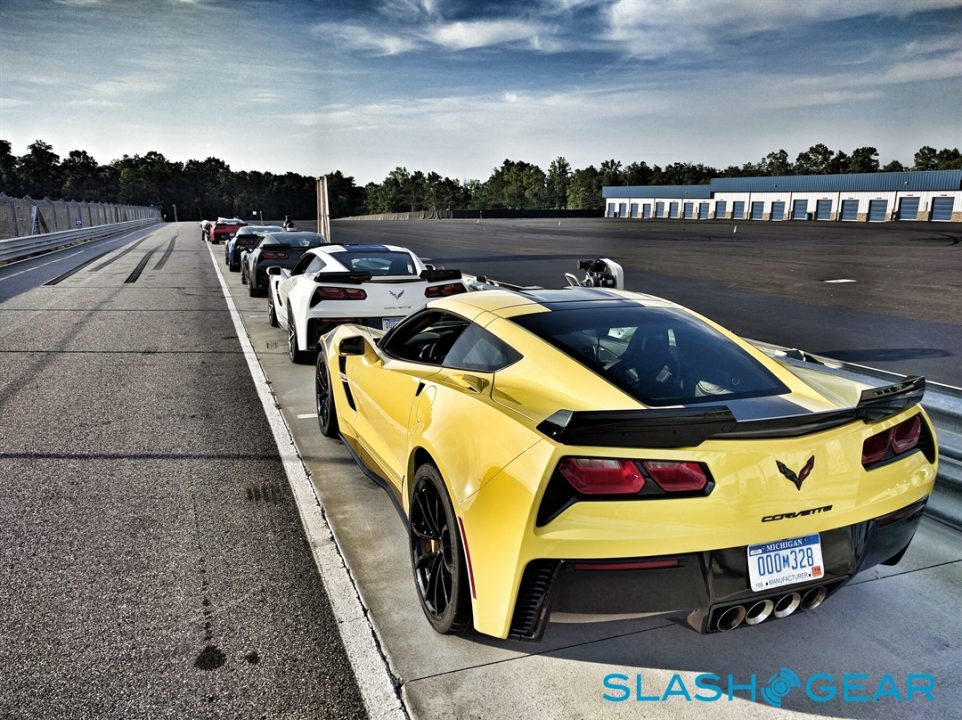 Specifically, the Grand Sport offers Michelin Pilot Super Sport street tires, Brembo brakes with rotors measuring well over 14 inches at all four corners, slightly stiffer springs and unique anti-sway bars, an electronic limited-slip differential out back, more aggressive aerodynamic add-ons (including a distinctive wickerbill spoiler), a wider rear track and pushed-out haunches, and perhaps most importantly, standard magnetic ride control. The latter is GM’s outstanding adaptive suspension system which allows for continuous dampening control and direct intervention in chassis response via the car’s respective driver modes (Wet, Eco, Tour, Sport, Track). Unchanged is the 6.2-liter V8 engine under the Corvette’s hood, which produces 460 horsepower and 465 lb-ft of torque, and which sees its output managed by the choice of either a seven-speed manual or eight-speed automatic transmission. 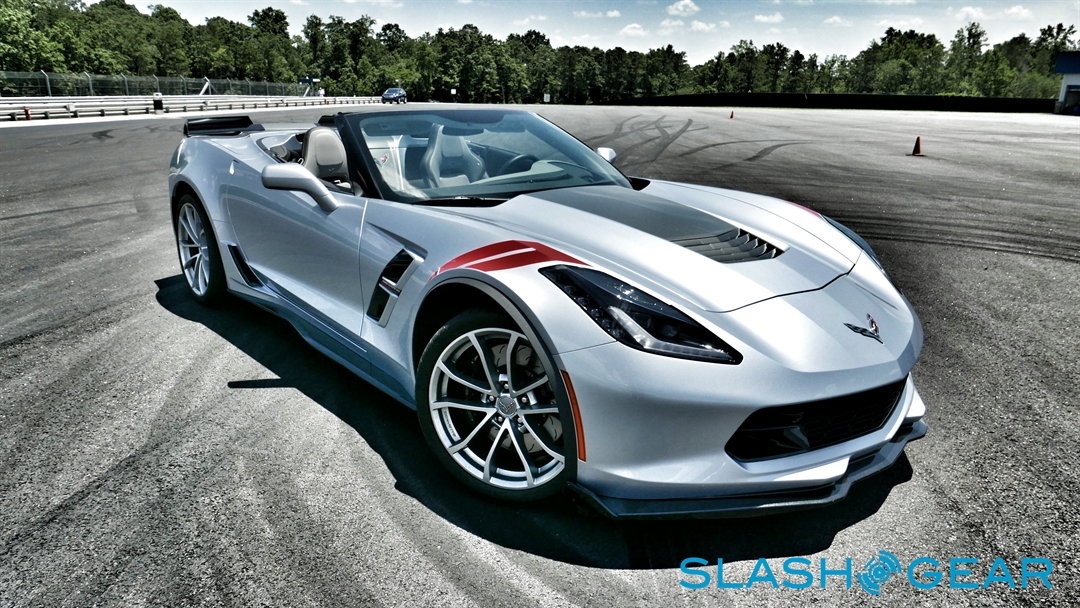 Let’s get back to that hairpin. All the grip I’d ever need to drop 100-mph and hustle the Grand Sport through the hard left that punctuates the end of the longest straight at Atlanta Motorsports Park is made available by the Michelin Pilot Sport Cup 2 rubber wrapped around its 19-inch (front) and 20-inch (rear) wheels. These barely-legal street tires are right at home on the sticky tar as the temperature crests triple-digits on a hot Georgia afternoon, and they’re assisted by carbon ceramic-matrix brakes that shrug off speed like a seasoned nudist dropping their robe on the beach: smoothly, and with absolutely no drama. 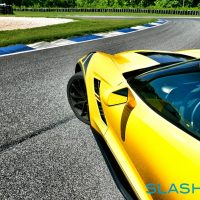 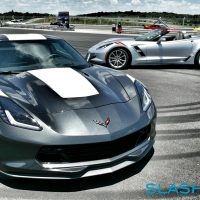 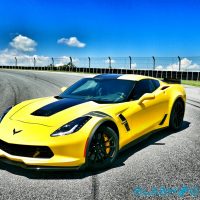 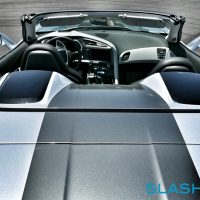 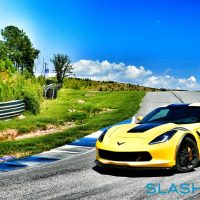 You’ll notice that neither of these items were mentioned on the fairly extensive list of standard upgrades that vault the Grand Sport over the entry-level or even the Z51 version of the Chevrolet Corvette. That’s because they come as part of the car’s optional Z07 package, which borrows many of the goodies previously only available with the pricy Corvette Z06. Although the Grand Sport models that I drove on the roads connecting Atlanta to Dawsonville were standard-issue, each and every track participant featured the Z07’s hardier brakes and upgraded tires. 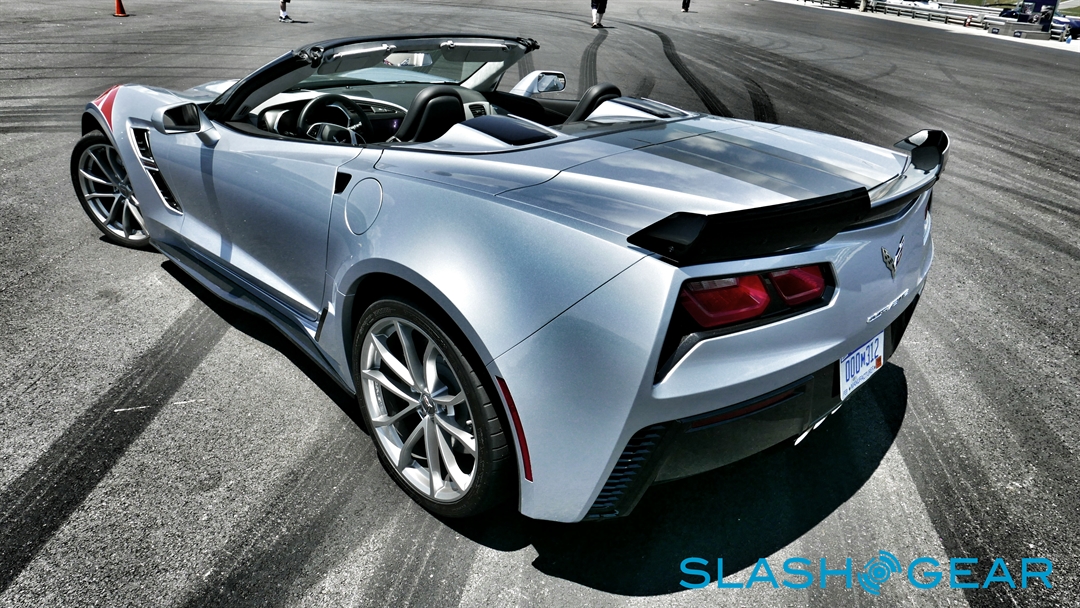 I was glad to have them, as they helped the Corvette Grand Sport feel entirely at home with the abuse doled out by driver after driver turning back-to-back sets of hot laps at AMP. Never once did the coupe raise any doubt in my mind about whether it would response to my commands with the resolve required to keep us both out of the weeds and away from the wall, its standard performance data recorder committing all apexes to memory. 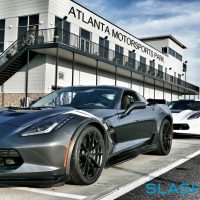 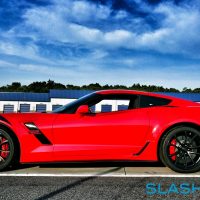 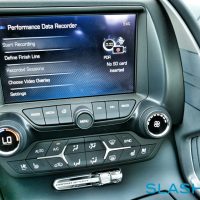 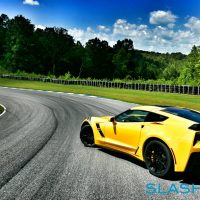 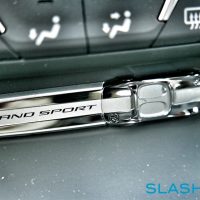 At the same time, for a well-tuned track machine the 2017 Chevrolet Corvette Grand Sport is remarkably docile to drive on your way to and back home from your next race school. Both fixed-roof and convertible versions of the car offer only their growling exhaust notes as a subtle clue of the potential lurking in their platform, and even this guttural affirmation remains attenuated unless you open up the pipes by selecting the vehicle’s Sport mode. This has always been one of the Corvette’s greatest strengths – a forgiving personality that lets it assume the mantle of the ‘sports car you can introduce to your parents’ – but that wild side still there, waiting for you to strike the match and light things up on demand. 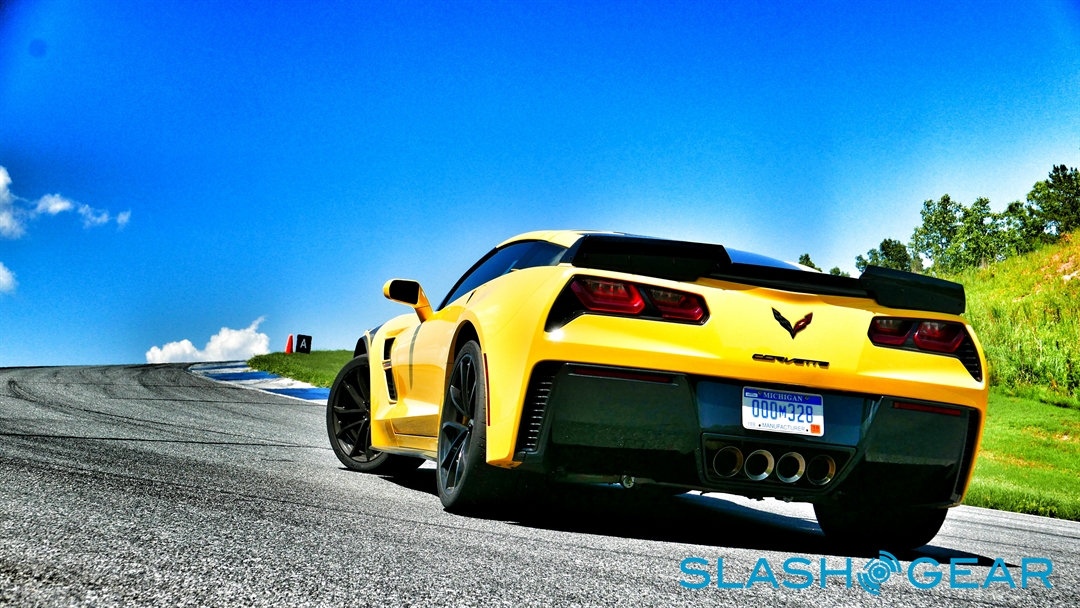 As a step-up from the current Corvette Stingray, the Grand Sport makes a compelling case. With an MSRP of $66,445 the significant chassis improvements and access to Z07 options is more than enough reason to justify the $10,000 gap between it and the base model. The argument gets even stronger when you consider that the Stingray with the Z51 performance package – until now the most potent non-Z06 model – clocks in at $61,445 without mag ride, effectively halving the distance true track junkies must stretch financially to get behind the wheel. If you don’t have space in your garage for dedicated track car, the Corvette Grand Sport affords you out-of-the-box road course dominance that cleans up nice when it’s time to head to work on Monday morning.