If at first you don’t succeed…how about 400 horsepower? That seems to be the guiding philosophy behind the redesigned 2016 Infiniti Q50 Red Sport 400, the latest luxury sedan from a Japanese brand tired of being relegated to third-pick status amongst fans of conspicuous consumption.

What better way to turn heads than by surging past the competition with an all-new turbocharged engine that promises class-leading performance in a straight line? How else to shake awake legions of loyal BMW and Audi fans than by upping the driver tech ante with the Red Sport gambit aimed squarely at M Sport and S Line models? 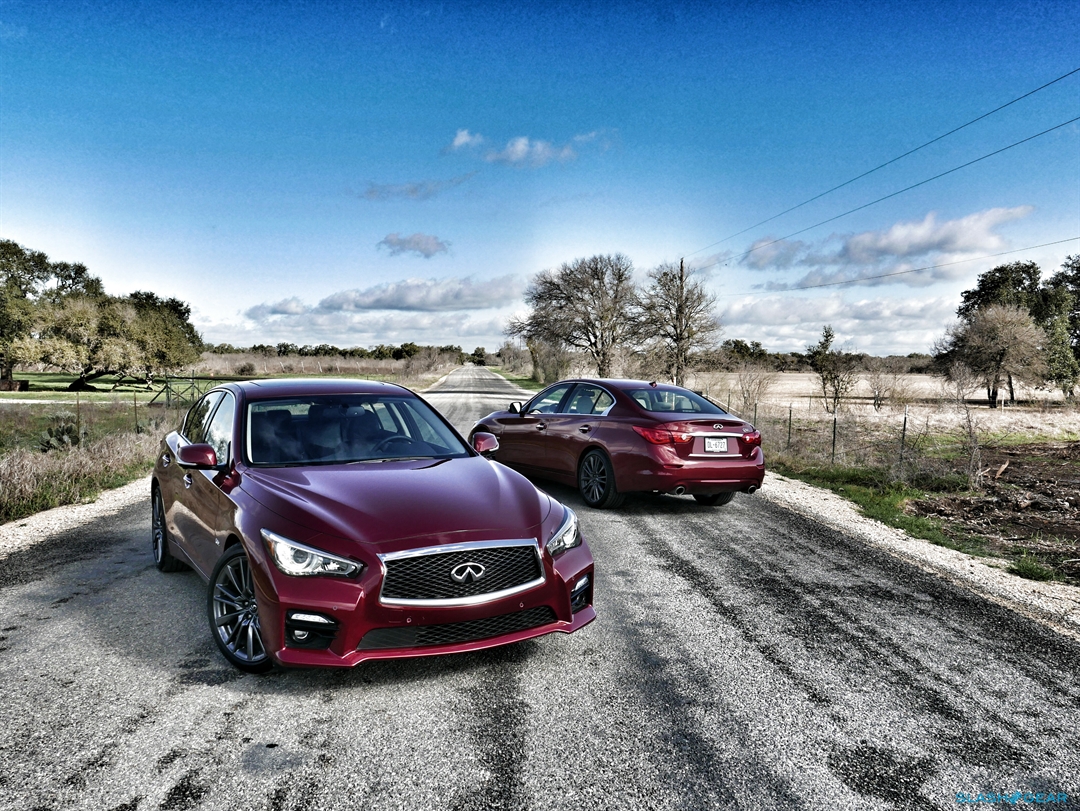 Unfortunately, it’s not that simple. When facing an enemy as entrenched as the BMW 3 Series or as elegantly executed as the Audi A4 an automaker has to produce a weapon that’s better, faster, smarter, and most likely cheaper, than anything its adversaries have to offer. The 2016 Infiniti Q50 Red Sport 400 satisfies most but not all of those particular criteria, illustrating why technology by itself isn’t enough to overcome decades of Teutonic indoctrination.

All of the important changes that have been made to the 2016 edition of Infiniti’s handsome four-door can be found under the skin. The action starts in the engine bay, where a trio of fresh drivetrains begins with a 2.0-liter, 208 horsepower turbocharged four-cylinder and ends with the 400 horsepower, 3.0-liter twin-turbo V6 offered by the Red Sport 400. In the middle there’s a de-tuned version of that same six-cylinder mill that’s good for 300 ponies – mechanically identical to the mightier model with the exception of the sensor suite required to safely run 14.7 psi of boost. 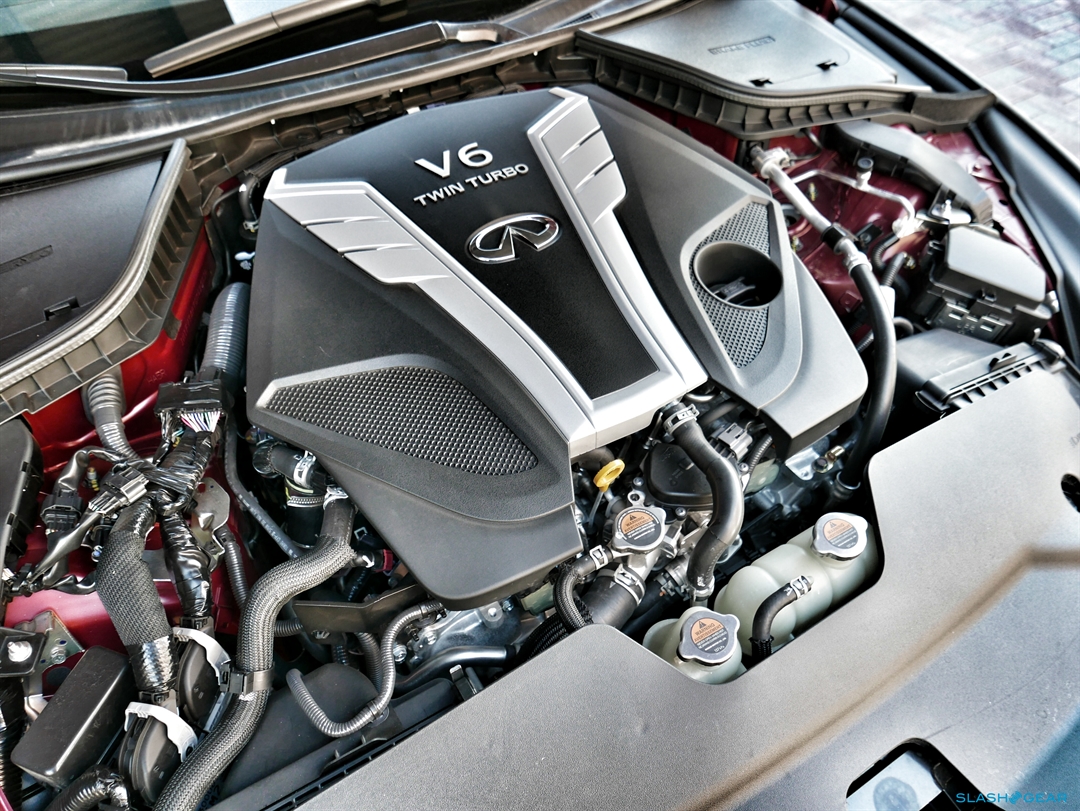 You’ll notice that 2016 marks the very first time Infiniti has marketed its entry-level sedan without the option of a naturally-aspirated VQ-series V6, a motor that has been nearly ubiquitous in the line-ups of both Infiniti and corporate parent Nissan for the past decade. Infiniti execs confirmed that turbocharging will gradually become the norm for most of its models, with the 3.0-liter V6 taking center stage, but wouldn’t commit to which vehicles would be the first to join the Q50 in shedding the VQ.

Joining the turbo parade are several key upgrades to the Infiniti Q50’s chassis. Building on the previous-generation car’s steer-by-wire system are two new implementations of the brand’s electronic steering system. Base four-cylinder Q50s feature an electronically-controlled hydraulic rack, while all other models benefit from ‘Direct Adaptive Steering,’ which offers more granular control over the weight of the wheel and the feedback sent through the column to the driver. It also plays nice with Infiniti’s active safety systems such as Active Lane Control (which keeps a digital hand on the sedan’s tiller at all times), and makes use of yaw data to enhance the linearity of the Q50’s steering response. 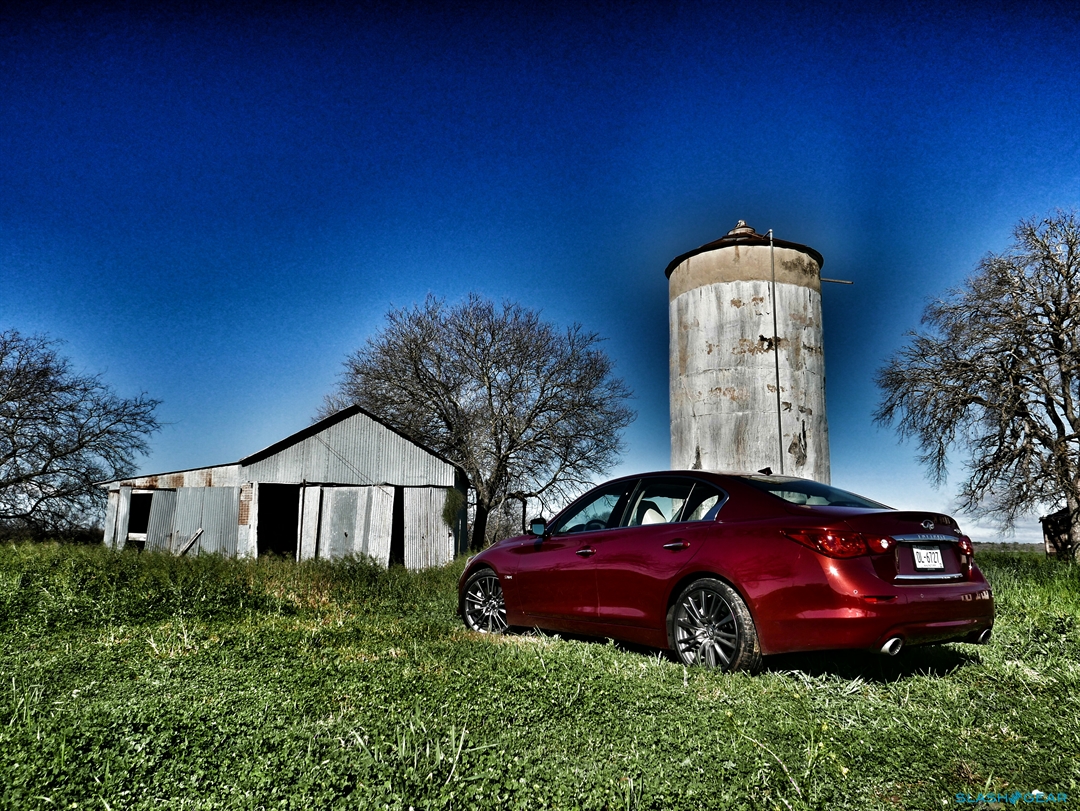 Just as high-tech is the new adaptive suspension system, or ‘Dynamic Digital Suspension’ that’s found with Sport editions of the Infiniti. The electronically-adjustable shocks that make up DDS can be stiffened or softened with the touch of a button, and they work together with revised sway bars front and rear as well as a more planted suspension geometry at the back of the car. 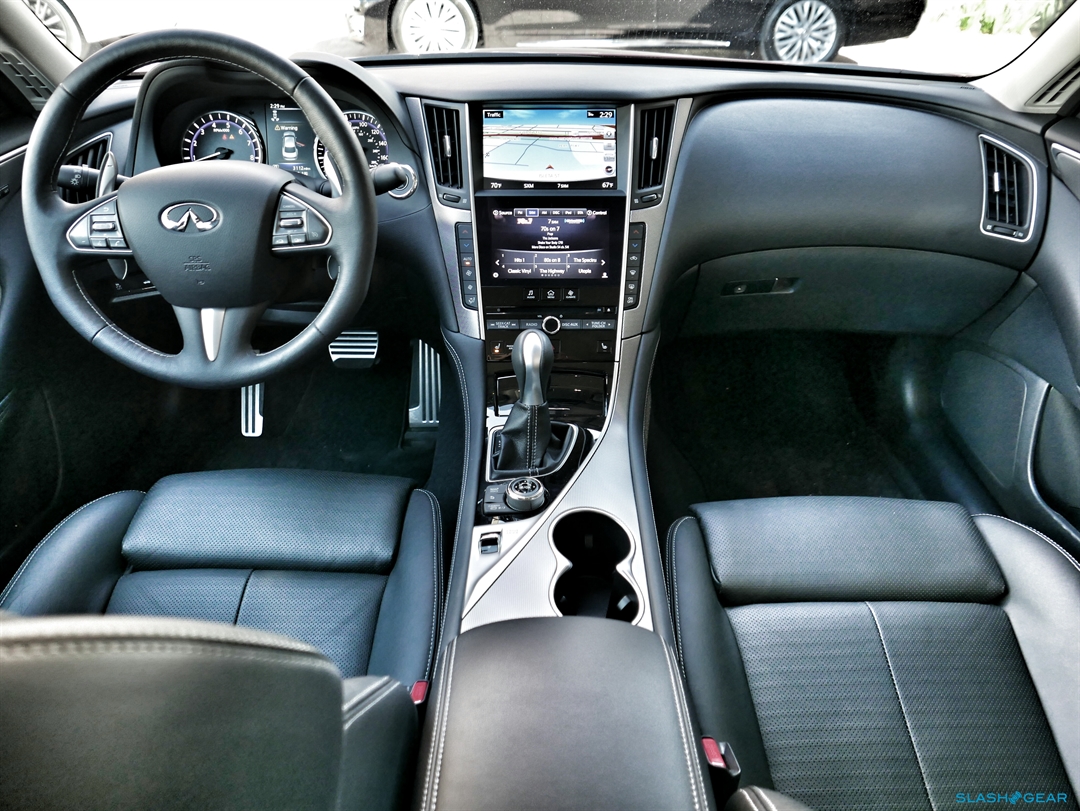 I had the chance to put it all together on the roads surrounding San Antonio, Texas, where Infiniti had mapped out 150 miles of twists, turns, and ruler-straight highway designed to exercise its new thoroughbred. A fleet of fully-loaded Red Sport 400s awaited in front of the Hotel Emma, a converted brewery that had survived not just Prohibition but also the murder of its original owner by his mistress before being inherited by its namesake, his widow.

Despite being pre-production models, one thing became immediately clear after just a few miles behind the wheel: the new Q50 Red Sport 400 is phenomenally quick. With 350 lb-ft of torque available as low as 1,600 rpm, flooring the gas and kicking down the car’s seven-speed automatic transmission elicits one of two reactions. If stationary, the rear wheels kick out sideways (all-wheel drive is available as an option) in a brief burst of tire spin before grabbing the traction needed to claw the Q50 forward. When already in motion – especially on the freeway – the Infiniti surges ahead in a remarkably smooth exhibition of muscle, pegging the speedometer past the triple-digit mark so rapidly as to elicit a double-take when checking one’s speed after a few seconds of throttle pressure. 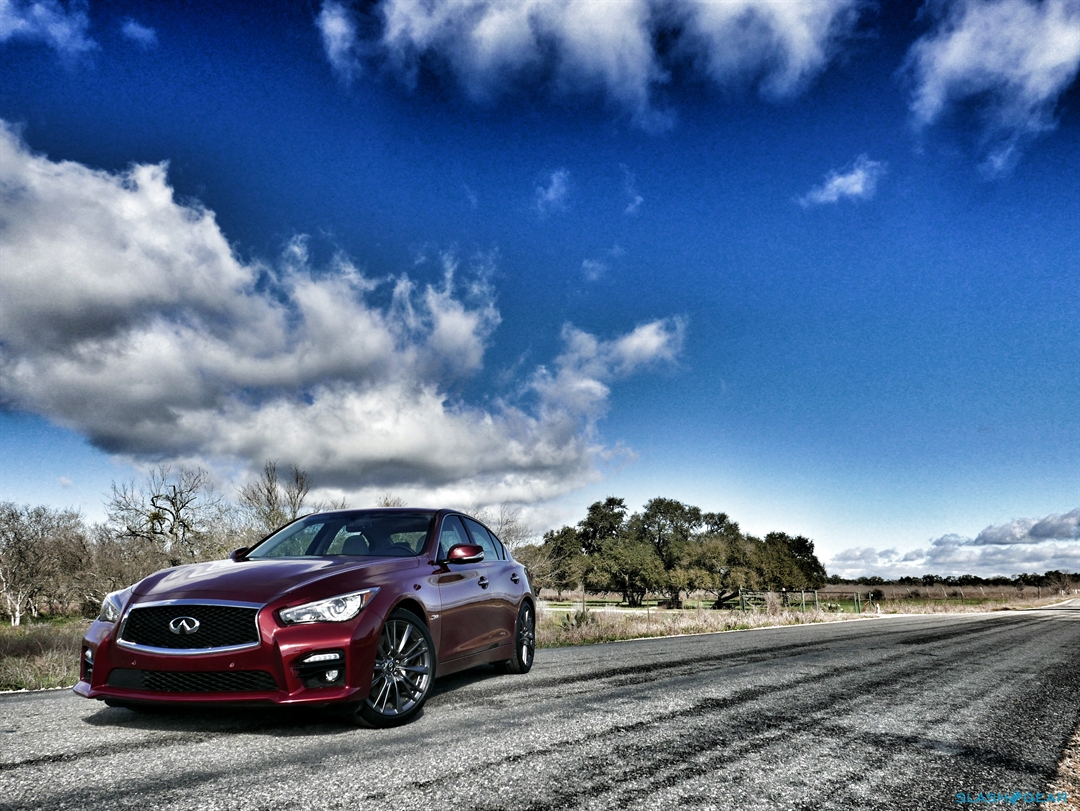 Perhaps most important is the fact that neither of these scenarios were ever possible with the previous Q50, a vehicle whose range-topping 3.7-liter V6 was perfectly serviceable but hardly heart-stopping when it came to performance. The introduction of a true flagship drivetrain for the sedan, and one that handily surpasses the BMW 340’s turbocharged output by a hefty 80 horses, is a fitting way to put an end to the reign of the once-mighty, but now merely tired VQ.

Get off the highway and settle in for some two-lane exploits, however, and you’ll quickly discover that the fast-twitch fibers encoded by the Q50s DNA are more sprinter than gymnast. With the car’s drive mode set to Sport+, the vehicle’s adaptive steering system provides its stiffest resistance and its highest level of road feedback, alongside a loosening of the stability control system’s watchful eye and more aggressive mapping for the throttle and transmission shift points. Still, parsing the undulating curves of Texas rural routes revealed less body control than I would have expected, especially when dealing with up-down motion inherent when rapidly cresting a series of small hills. 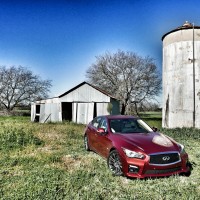 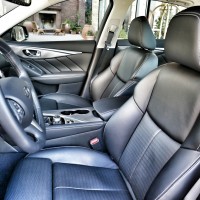 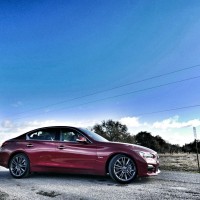 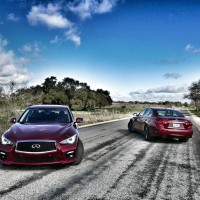 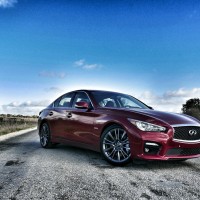 This was further reinforced on a short autocross handling course that had been setup specifically to demonstrate the differences between the Q50 Red Sport 400’s various drive modes. Unable to completely disable stability control, the Red Sport never felt as precise as it could have, especially compared to the also-new BMW 340i, even with the car’s Active Trace Control selectively braking the inside wheels to aid with corner pivots.

It’s worth noting that Infiniti has done its homework in differentiating each drive mode from the next. Moving from Sport+ to Standard had me shocked at how differently the steering reacted to my inputs, with the edge in linearity going to the more aggressive setting. Still, in most situations I preferred Standard’s softness to the amped-up character of Sport or Sport+, and the car does default to this setting on every restart. 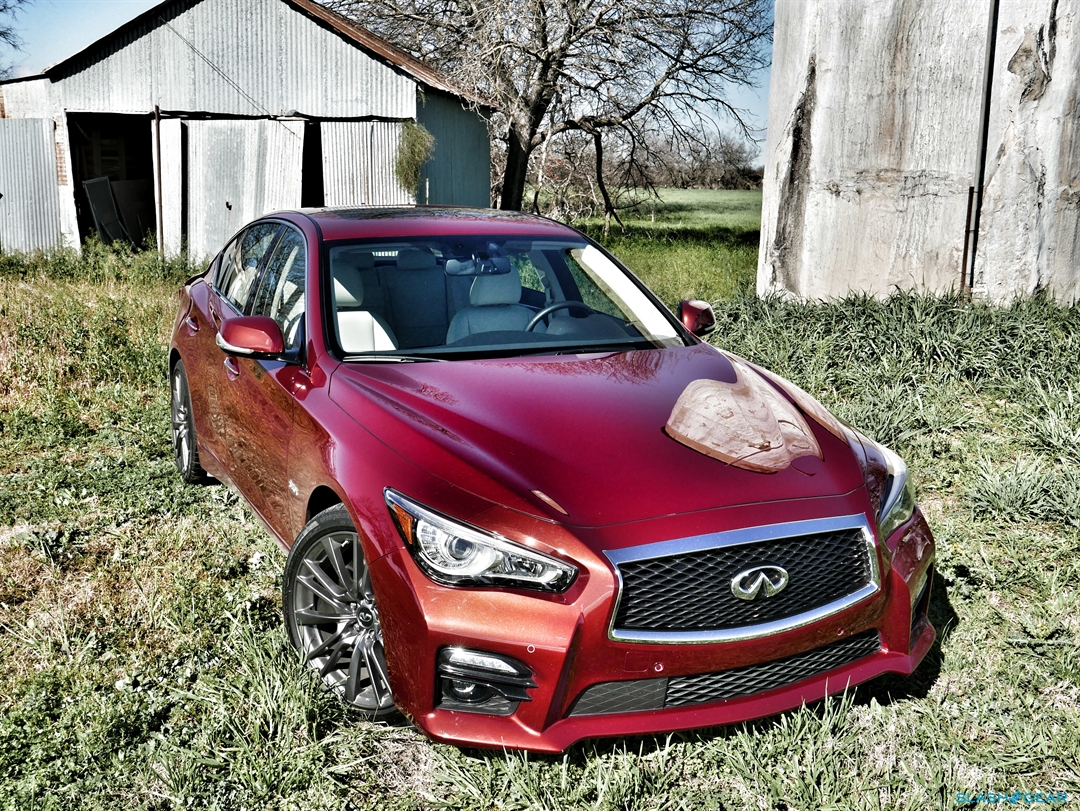 The 2016 Infiniti Q50 Red Sport 400 is an important step forward for the brand. Finally, the automaker can point to a sporty luxury sedan in its showroom with enough guts to go toe-to-toe with Europe’s heavy hitters – and do so with a daily-driver smoothness that belies the heavy hammer sitting between its front fenders. As a comfortable and stylish sedan with an affordable bent (official pricing is not yet available, but the MSRP will be capped well below $60k for the Red Sport and start in the $30,000 range for the turbo four), the Q50 is a success, especially once you factor in its strong suite of advanced safety features.

As a true driver’s car, however, there are a few too many ones and zeros on the boil behind the scenes for pilots to ever feel truly connected to the road beneath the Q50’s wheels. In fact, the word ‘digital’ appears prominently in most press releases describing the new car, whether it be related to the vehicle’s steering, suspension, or stability control system. In an effort to algorithmically duplicate the elements of an engaging driving experience, it would seem that something has been lost in the translation from the analog world. 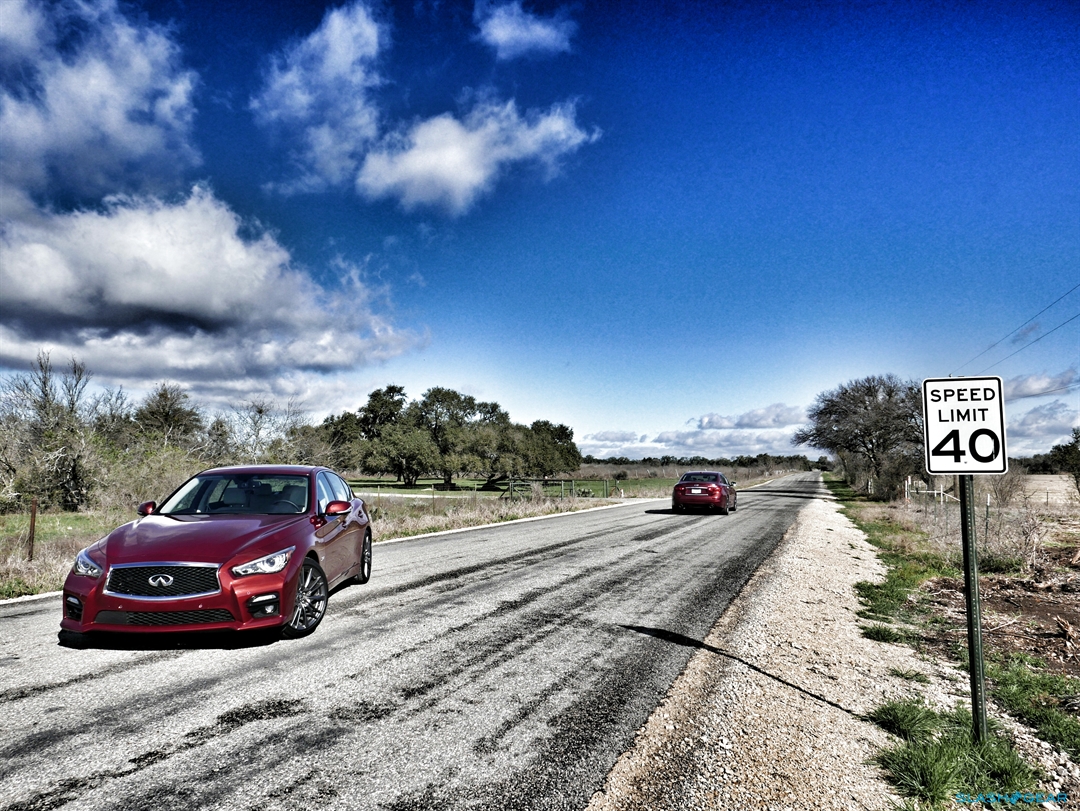 Does this truly matter to premium buyers? I submit that it does not – at least, not to everyone. Witness the success of the Mercedes-Benz C-Class, a car that is also exceptional with the gas pedal mashed to the floor but much more ordinary when trying to clip an apex. That Infiniti has elected to follow a similar path is no knock against the Q50 Red Sport 400, and it’s refreshing to see an automaker back away from all-out performance and instead focus on what most luxury owners are looking for in a comfortable sedan.

It’s also true that the Red Sport will likely find a limited audience, with most Infiniti shoppers seeking out the mid-tier, 300 horse version of the sedan. It’s here that the true acid test will take place, as customers will find out just how appealing the Q50’s new package becomes when overwhelming firepower is removed from the equation.