In 2016 one of the electric vehicle makers that was making waves with an EV offering long-range and high performance was Faraday Future. The vehicle seen in the images here is a 2016 FF 91 prototype and is the very same car that broke records at the Pikes Peak Hill climb. Before the company went bankrupt, the EPA had estimated the FF 91 for 378-mile driving range.

The prototype electric vehicle is up for auction with Worldwide Auctioneers with no reserve. There is no estimate of what the car might sell for, but it is a prototype that appears to be in rough condition, particularly on the interior. This is also the actual test vehicle that recorded the 0-60 mph test runs in 2.3 seconds.

The vehicle has a trio of electric motors that make a combined 1050 hp and a 130 kWh battery pack. Other features include a fully independent coil spring suspension system and four-wheel power disc brakes. Another cool feature of the vehicle is the suicide doors.

It’s unclear if the large display in the interior functions. The auction listing says the car has a heads-up display, 15-inch touchscreen for navigation and entertainment, and a flip-down screen for passenger entertainment. 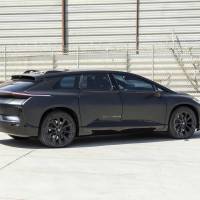 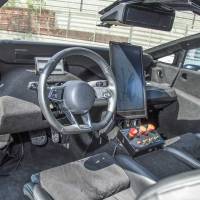 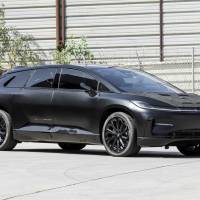 The listing says that the vehicle is “cutting edge technology” and it was in 2016. The car is undoubtedly aimed at collectors, as it’s unclear whether the car can drive on the streets. One thing is for certain if anything should get damaged, repairs will be difficult. Body panels only exist on the prototype. The FF91 was always a very cool looking electric vehicle. It’s a shame the company was unable to bring the creation of the market. It’s incredibly expensive to design and launch a new car, and few companies have been able to do it successfully.