How do you review a luxury cruise liner or a private jet? Certainly not from the captain’s bridge or the pilot’s seat. So it goes with the 2016 BMW 750i xDrive, the latest long-wheelbase expression of the German brand’s flagship, a technological tour-de-force that centers the spotlight on those few lucky enough to be able to afford not only a six-figure sedan, but also a driver to go with it.

This of course poses a professional dilemma, for while I often find myself with a high end automobile berthed in my garage, my lifestyle is not such where I can snap my fingers and have it brought ’round to the front of the house by my faithful chauffeur. And so, a compromise is born. I elected to drive the BMW 750i xDrive from Montreal to New York City in advance of the New York International Auto Show, where I would be able to sample the sedan over the course of the 800-mile round trip as a driver. Once in Manhattan, it would be time to evaluate the vehicle from the rear accommodations as I traded off riding and driving duties with a friend who had agreed to the decadent sacrifice in the name of science. 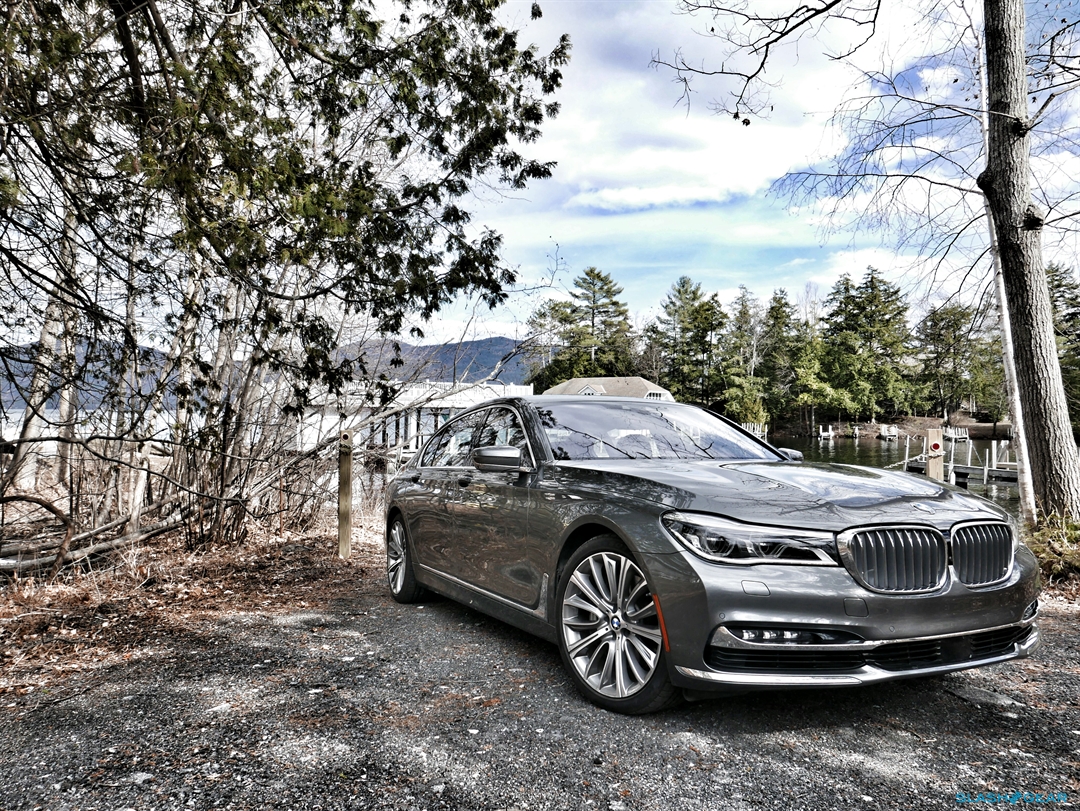 There’s no question to me that the 2016 7 Series was redesigned in part as a reaction to the Mercedes-Benz S-Class that debuted the year before. The de facto standard of the executive saloon segment, the S-Class made waves by amping up not just its power and poise but also through the introduction of a suite of self-driving features that combined with a predictive suspension option and numerous other tech tricks to stun even the most jaded premium buyer.

Enter the 750i xDrive. Perched at the top of the 7 Series pyramid, BMW has backed away from the full-size model’s previous doctrine of attempting to embiggen the automaker’s engaging driving dynamics and instead picked the path so recently traveled by Mercedes-Benz. The end result is undeniably the plushest vehicle from BMW to date, but one that will feel a bit foreign to anyone attempting to make the genetic link between the 750i xDrive and its 3 Series or even 5 Series siblings. 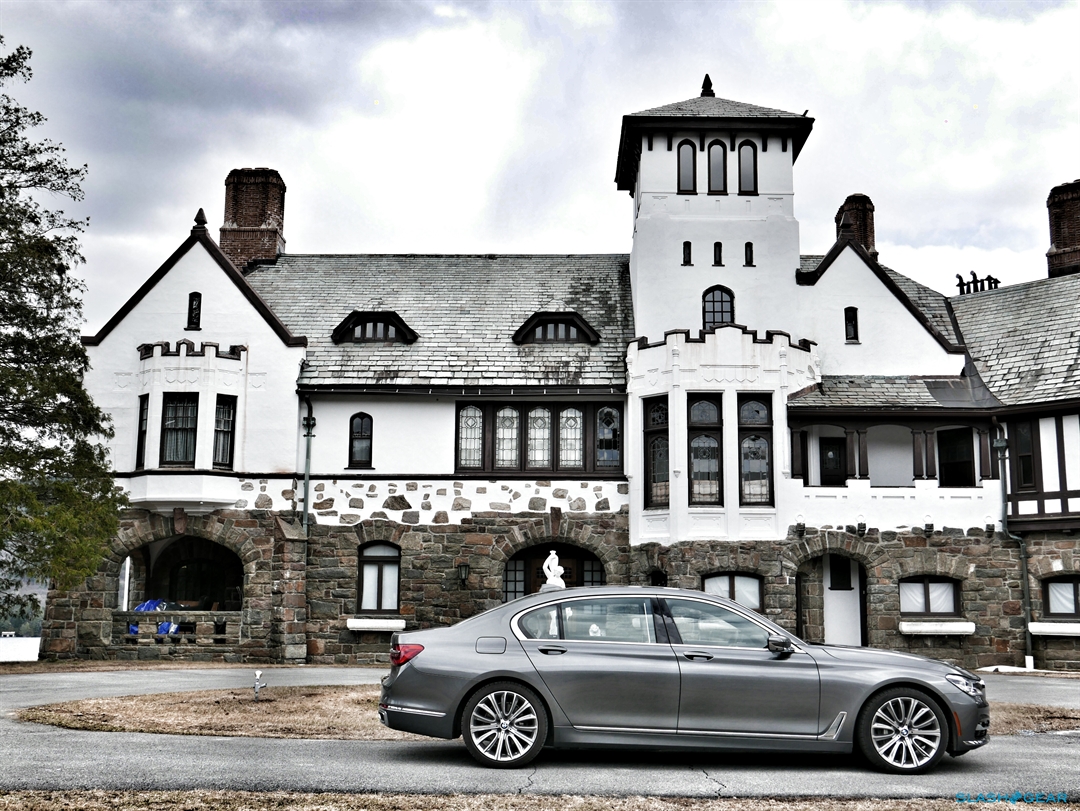 The evidence is ample. It starts with the decision to move to a full air suspension for 2016, which can be stiffened or softened by way of the vehicle’s selectable drive modes. The console-mounted button in charge of the 750i xDrive’s on-road character also affects shift patterns and steering feel, and ranges from Comfort+ to Sport+. 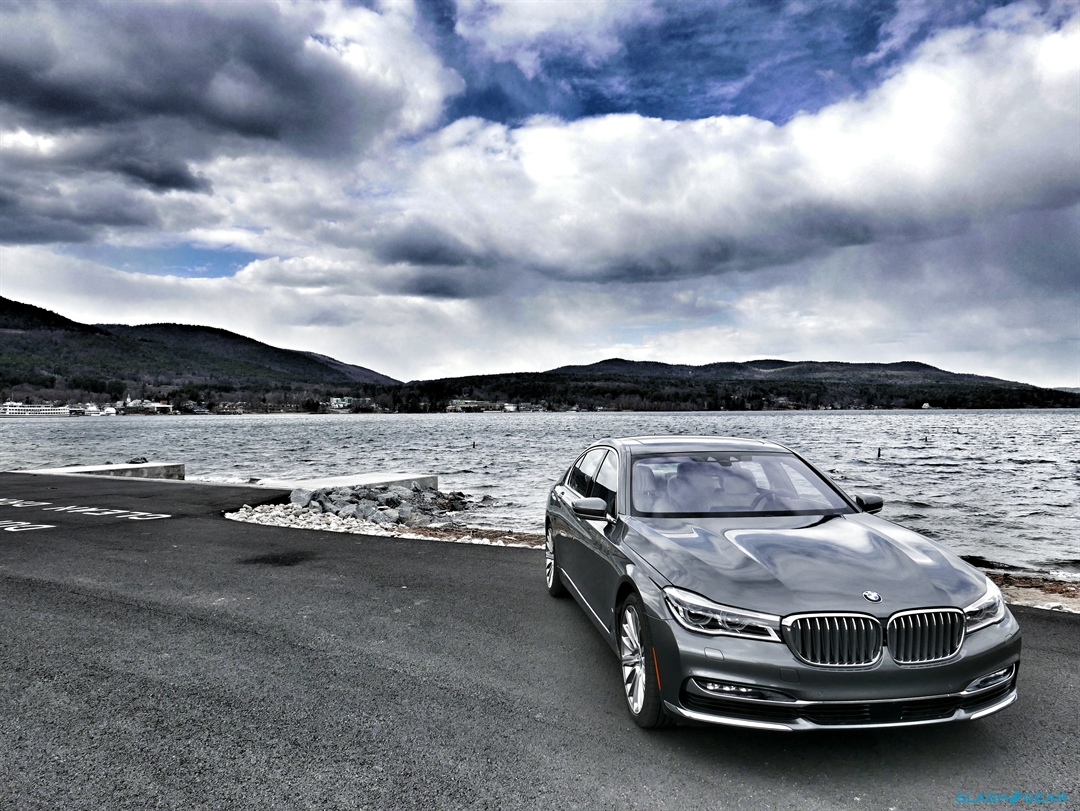 The former is alarmingly disconnected, with steering roughly similar in feedback to the popular 80s arcade game ‘Pole Position,’ while the latter simply reminds you that you are attempting to hustle a fairly heavy (although lighter than before), and extremely long automobile that would really just rather be cruising, thanks. This is despite the presence of active body control (read: adaptive swaybars) and a rear-steering system that are each a first on an all-wheel drive BMW like the one I drove. 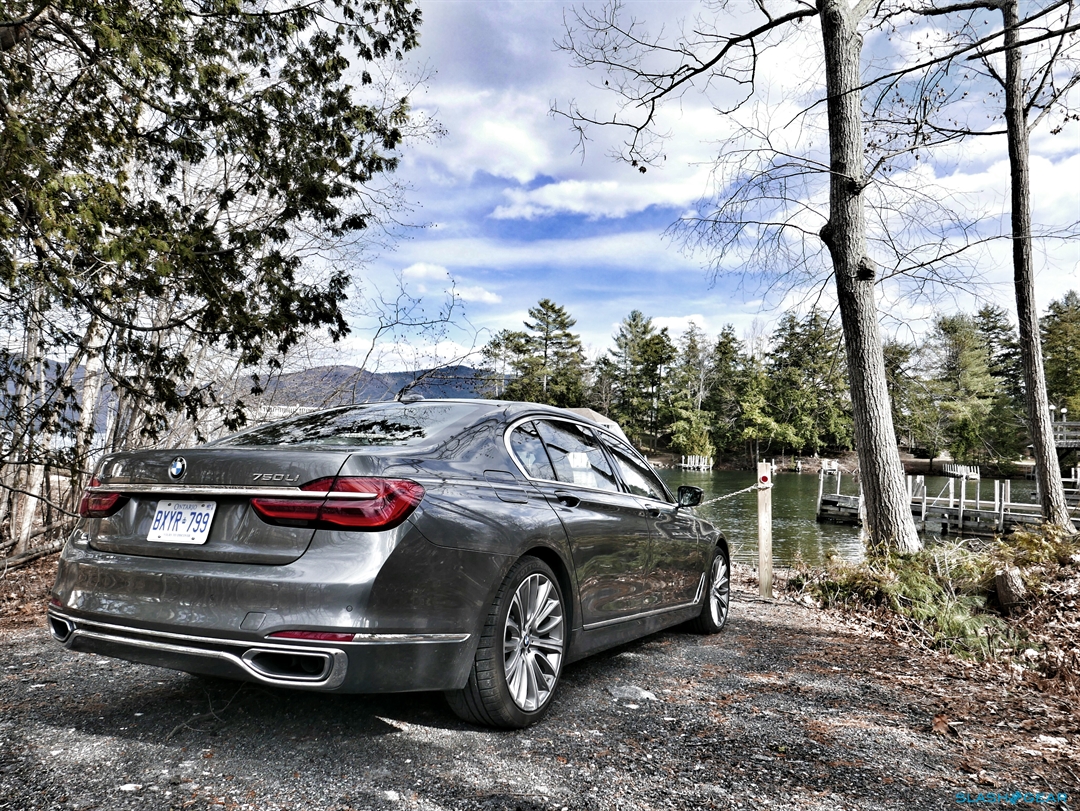 Fortunately, somewhere in the middle lies Comfort, which made for the perfect companion when munching down the long, semi-mountainous stretches of interstate separating the Great White North from Gotham. BMW offers several options for enhancing your calm behind the wheel of the 7 Series on extended jaunts, including an excellent adaptive cruise control feature as well as a lane departure mitigation system that nudges the sedan back onto the straight and narrow should it stray over the painted lines. 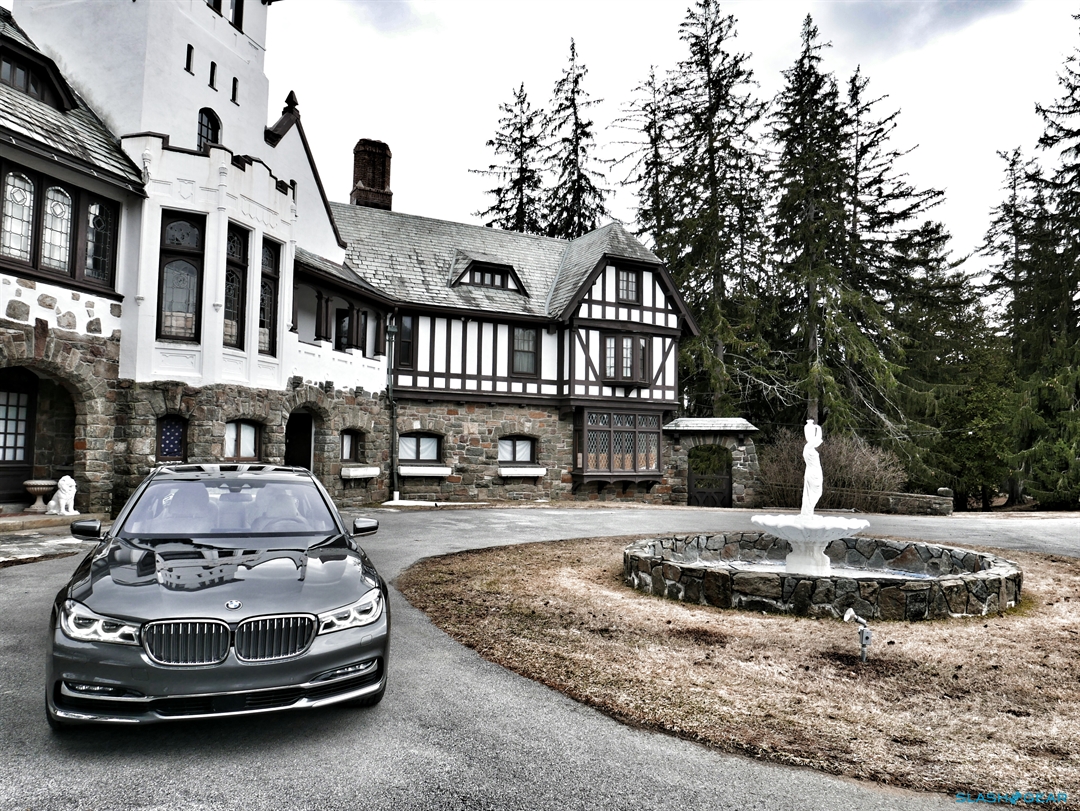 A more comprehensive self-steering system can also be activated via a steering wheel-mounted button, and while it’s a step behind the follow-along cruise found in the S-Class, it’s almost-autonomous on a well-delineated road as long as you keep a finger or two gripping the leather. Personally, I found the system a bit too intrusive as the car wants to stick to its own rigidly-defined lane position preference, and subtly fighting these steering inputs becomes fatiguing after a few hours. 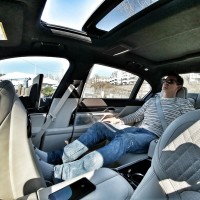 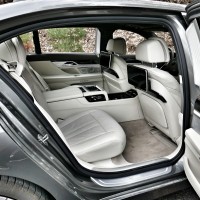 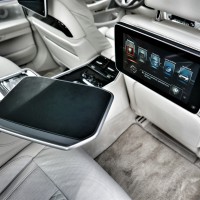 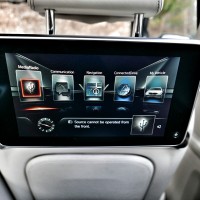 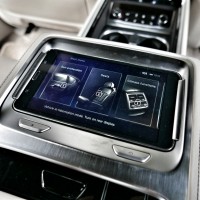 The real crux of the 750i xDrive’s technology package rests on how it treats backseat riders. My tester was outfitted with the Rear Executive Lounge Seating package, which essentially converts the right rear position into its own Barcalounger, complete with ottoman, full recline, and sturdy metal tray for holding laptops or snacks – an option that, in concert with several other packages, helped drive the price of the 750i xDrive up to $118,000 from its $97,400 starting point. 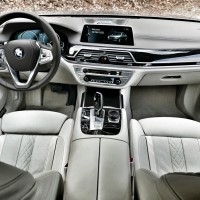 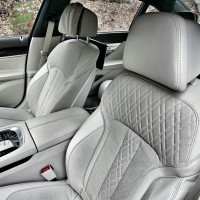 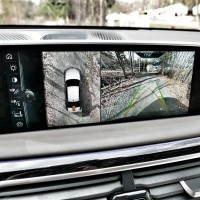 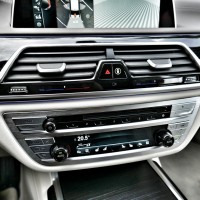 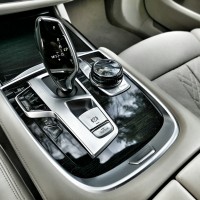 The fully-immersive luxury experience is completed via a pair of iDrive-linked display screens mounted on the forward headrests, along with a detachable tablet that offers control over the entire rear habitat. It’s an absurdly comfortable way to travel, and it makes perhaps the strongest case for finishing your MBA and getting a head start on an earnings path that will one day land you in similarly-plush BMW quarters. 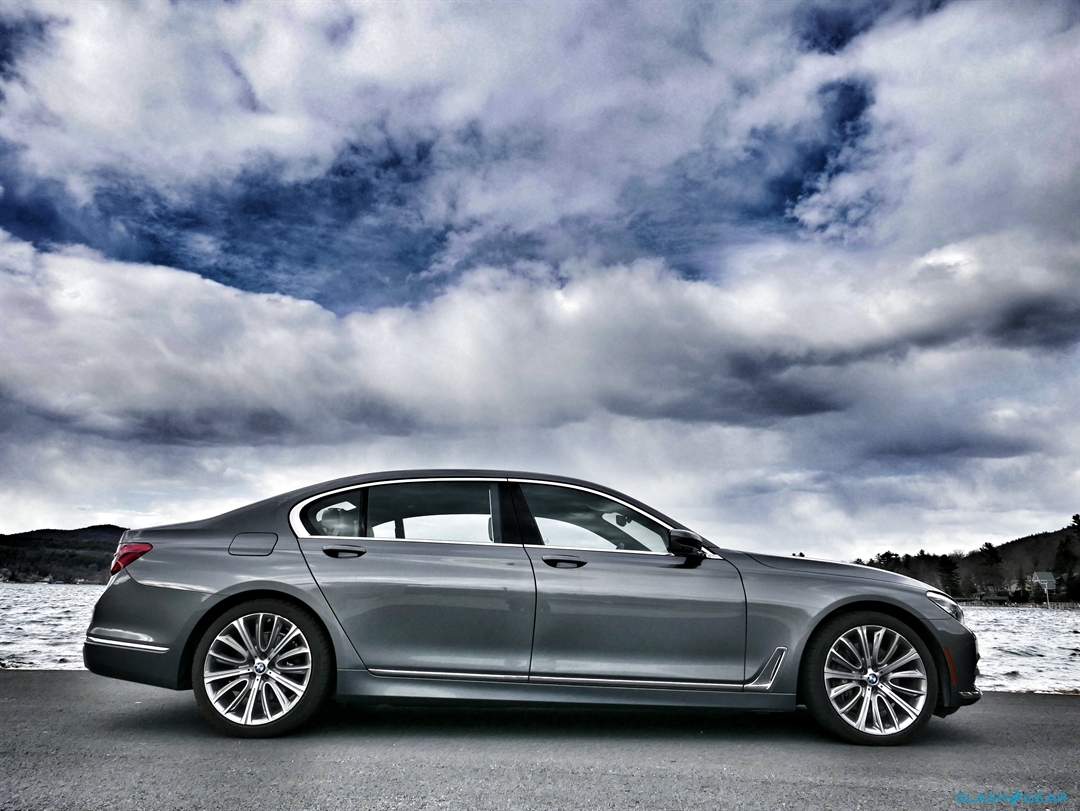 Still, in some ways the 2016 BMW 750i xDrive feels as though it’s left part of its past in the rearview mirror. While acceleration from its carry-over 445 horsepower, 4.4-liter twin-turbo V8 engine is excellent and its eight-speed automatic transmission sufficiently smooth, there’s little about the sedan’s chassis that suggests it was once the most athletic of its European rivals. There are a few gimmicks stuffed in to the car, too, with features like ‘Gesture Control’ that sound good in a PowerPoint presentation at the head office but in practice (using flitting hand movements to control simple tasks like turning a volume knob) are of dubious value. 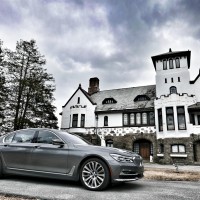 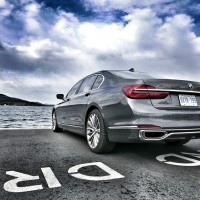 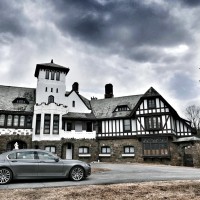 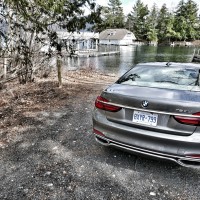 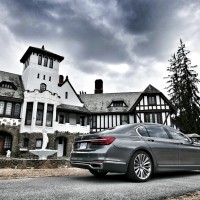 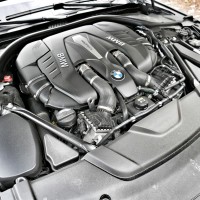 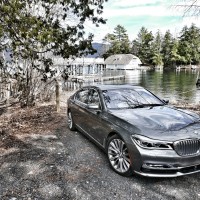 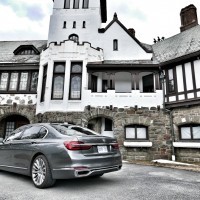 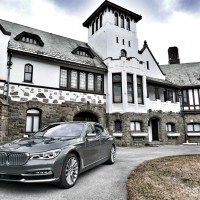 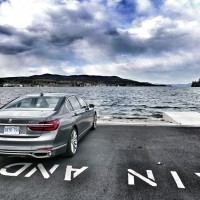 This isn’t an indictment of what is otherwise a very good, extremely comfortable, and hugely capacious luxury sedan. Rather, it’s an indication that BMW’s approach to the 750i xDrive – harvest as many window sticker line items as possible from the R&D lab and throw them at buyers in one pulsating cannon burst – lacks the performance focus of past efforts. The redesigned BMW 7 Series represents a new chapter from Bavaria, one that remains class-competitive but trades some of its past leadership and individuality for the safer, and easier to market confines of digital conformity.