Vuzix has revealed its challenge to Google’s Glass, the Vuzix Smart Glasses M100, a wearable Android computer set to hit the market in early 2013. Resembling an oversized Bluetooth headset, the Ice Cream Sandwich-based M100 consists of a virtual display eyepiece, integrated WiFi and Bluetooth, a 720p HD camera, and head-tracking sensors, and can work in partnership with your iOS or Android smartphone for all manner of augmented reality applications.

That can include hands-free calling, photography, web browsing, and SMS messaging, as well as visual navigation using services like Google Maps. Any smartphone app which can output to an external monitor will be supported. The 3-axis head tracker is paired with a gyroscope, GPS, and a digital compass for pinning down your location, and there’s an earpiece and noise-canceling microphone for calls and speech commands. 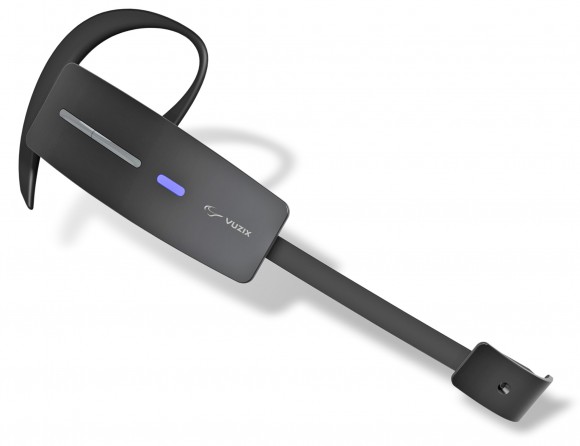 The display itself runs at WQVGA resolution with a 16:9 widescreen aspect ratio, and gives the impression of looking at a 4-inch smartphone display viewed at a distance of 14-inches. It has more than 2,000 nits of brightness, essential for outdoor visibility when it will be competing with sunlight, and can be used with either the left or right eye.

As for the camera, that shoots widescreen video and images at 1280 x 720 resolution, and can save shots to up to an 8GB memory card. The whole thing runs a specially-fettled version of Android 4.0 on a 1GHz OMAP4430 processor with 1GB of RAM and 4GB of flash storage, with WiFi b/g/n and Bluetooth, along with physical power, select, and volume up/down keys. 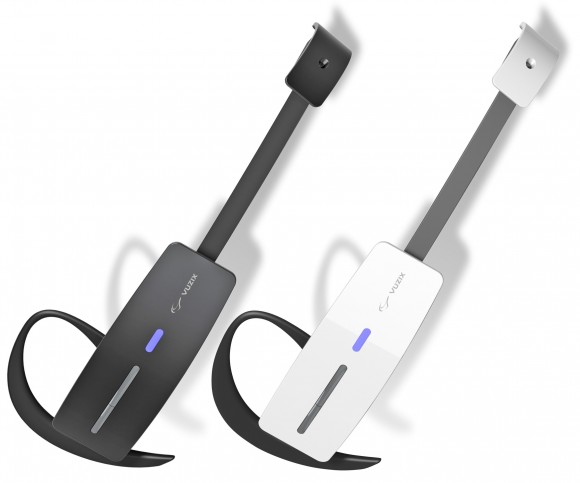 Vuzix says the battery in the M100 is good for up to 8hrs of handsfree use, or two hours of hands-free use with the display active. That unfortunately halves to just an hour if you want to use the handsfree, display, and camera simultaneously. Google hasn’t discussed battery life for Project Glass in any detail yet, but balancing power consumption, functionality, and portability is going to be a challenge for all wearable device manufacturers. Mounting is via either an over-ear hoop, an over-head band, or a band behind the head.

Vuzix will be offering an SDK for app developers to hook their software directly into the Smart Glasses M100, and since the wearable is a standalone computer in its own right it will readily work with both iOS and Android phones and tablets. It’s already caught the attention of CES, winning the “Best of Innovations” awards in design and engineering for 2013.

Exact pricing and availability for the Vuzix M100 haven’t been revealed, with the company telling SlashGear only that it’s due early next year. However, a developer kit – including the Windows-based emulator, sample code, access to a private coders portal with assistance from Vuzix, and the promise of an early production M100 when available – is priced at $999, with the software elements of the bundle expected to be available in December 2012. 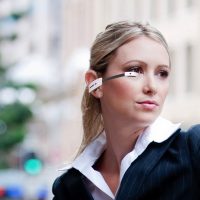 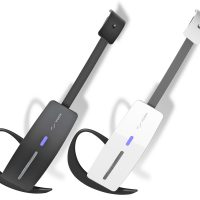 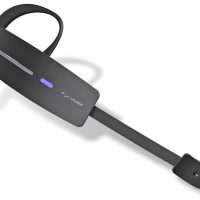