Verdict and 10 things to know about Ubuntu bq Aquaris M10

We have finally come to the end of our long, three-part journey into the relatively unexplored world of Ubuntu Touch devices and the bq Aquaris M10 tablet. We’ve seen what the hardware is capable of and and we’ve gotten a glimpse of the future of computing promised by Ubuntu Touch. Now it’s time to take stock of it all and answer the most difficult question of all: should you buy this rather piece of equipment that is both unique and ordinary at the same time?

If I were to summarize the first two parts of the review into a single sentence, it would go like this: The bq Aquaris M10 is a promising start to a new kind of convergent computing but is hampered by decent but mediocre hardware and work-in-progress software.

Hardware-wise, the tablet is nothing to write home about. Its Android sibling would be near indistinguishable from other Android tablets in the market unless you give it a closer inspection. That’s not to say that the hardware is terrible, though it does show its warts from time to time, heaving heavily under the weight of multi-tasking. The hardware is decent for its price range, but would have remained unimpressive and forgettable if not for the software.

Ubuntu Touch is what both makes and breaks this edition of the bq Aquaris M10. On the one hand, you have a unique and different operating system that can and does stand apart from the Androids and iOS’s of today. At the same time, it is also the tablet’s biggest problem. Although released in a commercial product, Ubuntu Touch is far from being the polished OS that Android and iOS are today. To compare it to the state of the first Android and iOS releases wouldn’t be that far fetched. Given how long it took those two to reach the level of refinement and sophistication they are now popular for, Canonical and the Ubuntu community have a lot of work ahead of them. 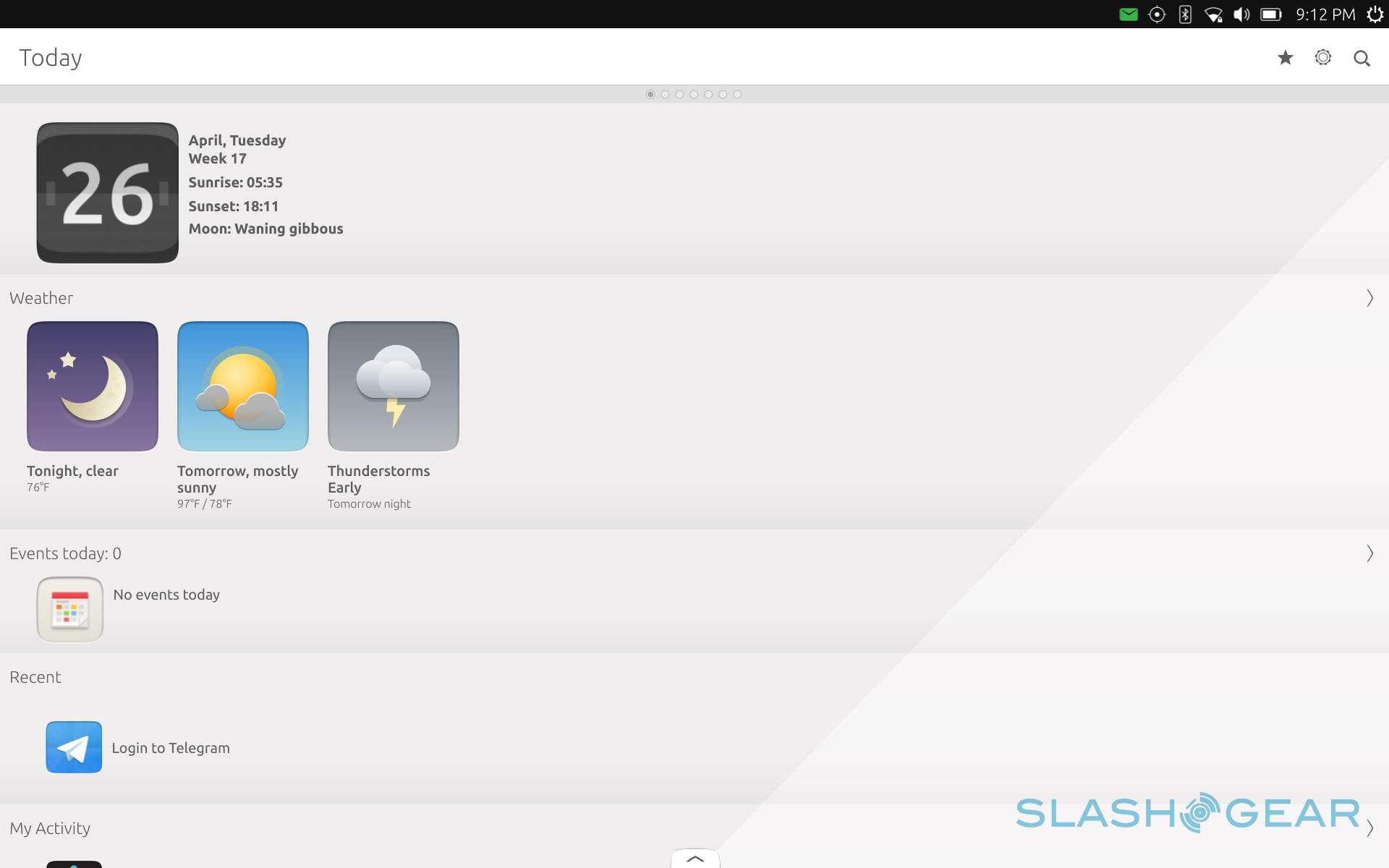 It isn’t a finished story, however, and things aren’t that bleak in the grand scheme of things. Ubuntu Touch is an open source operating system with corporate backing. Development, both in new features and bug fixes, happen at speeds after than behemoths and closed platforms can only dream of. Canonical actually just released the OTA-11 tablet earlier, bringing the much needed wireless display support to the OS.

So, is the bq Aquaris M10 Ubuntu Edition a buy or a bomb?

The answer isn’t clear cut and depends on the type of user that you are.

If you’re looking for an end-user experience close to Android or even, say Windows 10, you might want to stay clear of Ubuntu Touch devices for now. It is honestly not yet at that level. While usable, it still has enough rough edges to frustrate the regular Joes and Janes of the world.

If you’re a more adventurous technophile and don’t mind going on an exciting but sometimes dangerous adventure into the future of computing, then by all means give the bq Aquaris M10 Ubuntu Edition a try if you have the funds to spare.

And if you’re anything of a Linux user or open source fan, then there should be little discussion here. This tablet is one of the extremely few successful attempts to bring the operating system into the mobile consumer world. A strong show of numbers would be a good proof of interest in these types of experiences and could help expand the number of partners for future devices. And Linux users do want, and deserve, shiny things too, despite the unjust stereotypes. 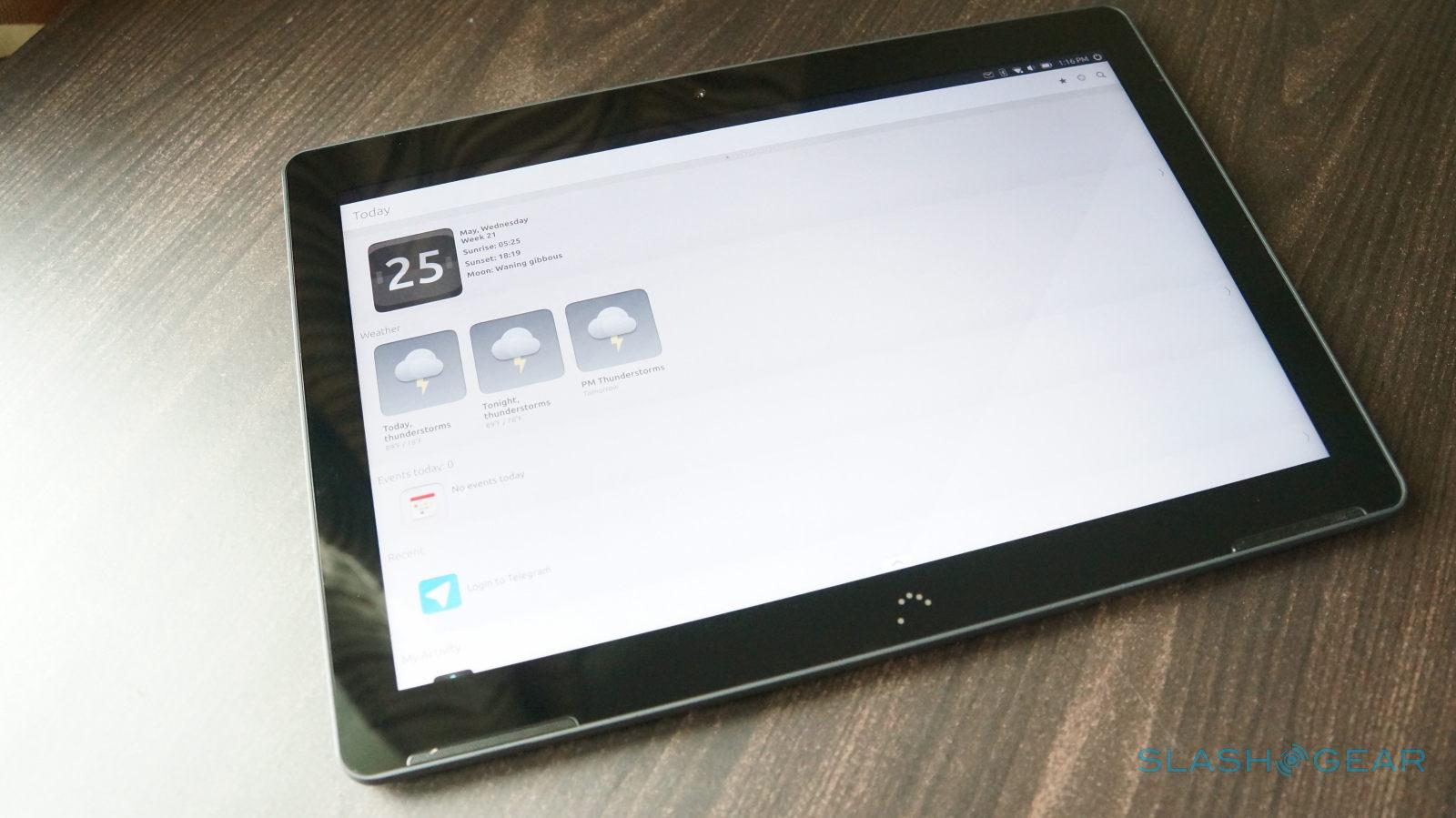 Top 10 things to know about the bq Aquaris M10

So you’ve decided to get a bq Aquaris M10 Ubuntu Edition but want to be prepared for the journey ahead. Here are 10 things you’ll want to keep in mind while waiting for the tablet to arrive.

That might be pretty obvious, but it still pays to keep your expectations in check. Despite some similarities in appearance or gestures, Ubuntu Touch is a very different beast so conventions do not always apply. That also means your favorite apps might not be available in the Ubuntu App Store, at least if there’s no web app version of it. Which takes us to #2.

2. There are other ways to install software

The App Store isn’t the only source of apps for Ubuntu Touch. There are other ways to install software, particularly the “desktop” programs, but it comes at a cost. It isn’t a fully supported process and, with at least one method, it is akin rooting your device. Enabling the installation of software outside the Ubuntu Store isn’t a destructive process, but if you want to go back to the original state, you might have to wipe your tablet clean.

This particular point deserves explaining. In technical terms, you need to make the system partition writable as it is read-only by default. Doing so, however, has the side effect of no longer getting OTA updates when they come. If you do want to start receiving firmware updates again, you have to go back to the pristine state, which involves flashing the device with the original firmware.

Hopefully in the near future Ubuntu Touch will have a cleaner, safer way to do that

3. You are using a mid-tier tablet, not a flagship

Convergence is pretty neat but also deceptive. You are, after all, trying to use your tablet like a desktop computer, multiple and floating windows and all. You might be tempted to do everything you do on a desktop, but you have to remember that while the software is certainly capable, the hardware isn’t. MediaTek definitely has come a long way since its early days, but the particular chip inside the Aquaris M10 isn’t exactly the fastest and 2 GB of RAM might not have enough room for everything that you want running at the same time.

4. Forget about copy/paste in Firefox and LibreOffice

This is a rather painful point to make and the sole factor that ironically makes this Ubuntu Touch tablet unsuitable for professional work, at least for writers like yours truly. Ubuntu Touch’s sandboxing, which became necessary to support desktop apps running securely inside Ubuntu’s custom environment, sadly also blocks the ability to copy and paste between apps running in those sandboxes. Between Ubuntu Touch apps, there is no problem. But once you factor in those desktop apps, things get ugly quickly. Hopefully a future OTA would fix that or a third-party solution surfaces soon.

5. Ubuntu Touch only has “Peek”, no split screen

At a time when split screen capability has become a hot topic in the mobile world, Ubuntu Touch sadly falls a bit behind. In tablet mode, the OS only supports the equivalent of iOS 9’s “Peek”, which involves keeping an app in a sliding side panel a third of its original size. Tapping on the main, full window dismisses that panel. Swiping with three fingers from the right edge calls it back again temporarily. Unlike iOS Peek, however, any app is fair game, even desktop ones, though those don’t scale as nicely. 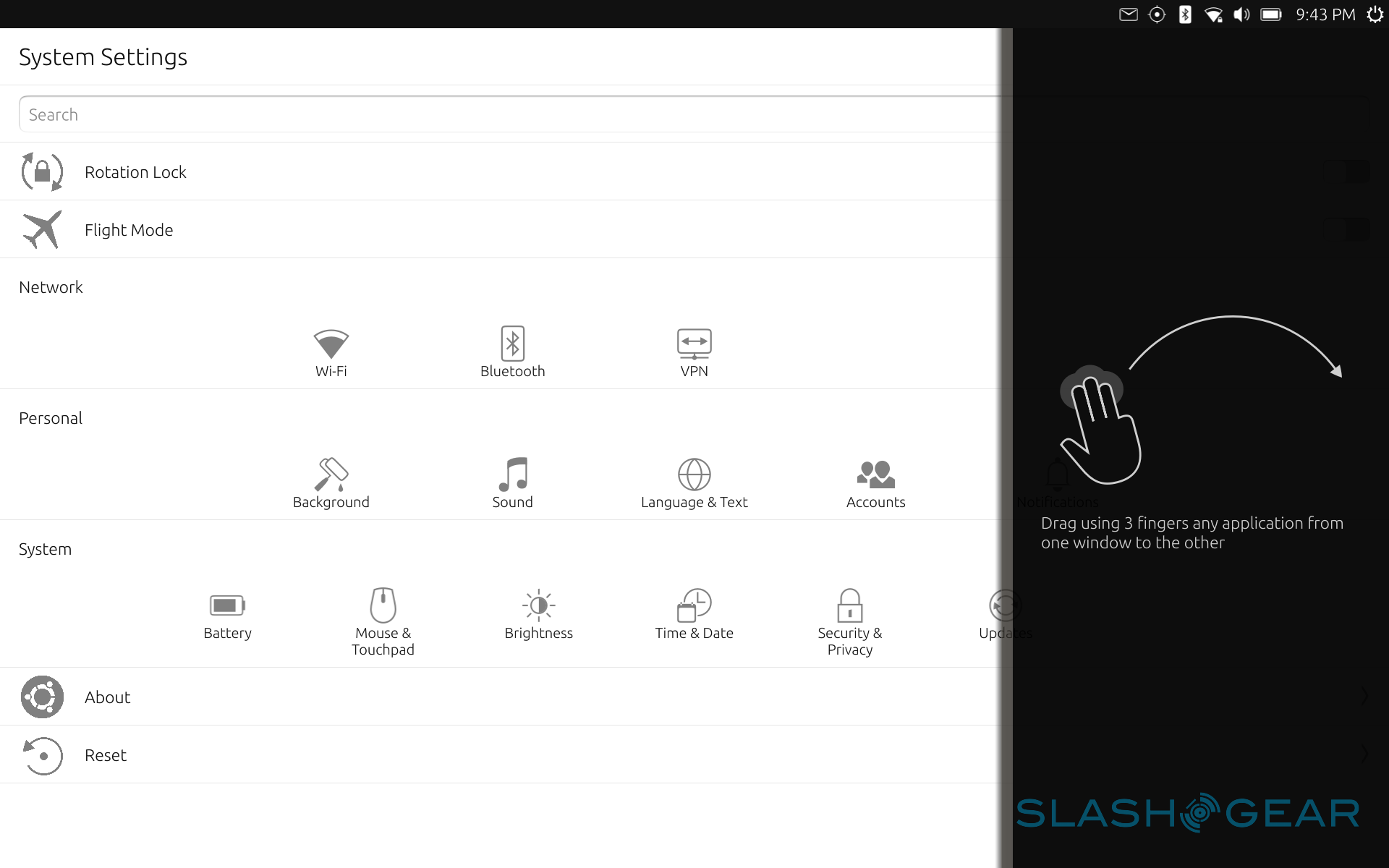 Although the lack of split screen is somewhat disappointing, Ubuntu Touch does offset that with desktop mode, which allows you to size and position windows just the way you want.

6. You can switch to Desktop mode manually

It may or may not be entirely evident, but the tablet switches to and from Desktop mode automatically depending on the presence of either two peripherals. The moment you connect either a mouse or an external display, the tablet becomes a desktop. Remove either or both of those and it reverts to a mobile device. Connecting a keyboard doesn’t trigger the switch. However, you can manually switch between desktop and tablet modes at will. The toggle is hidden in the System notification panel.

7. You can play Baldur’s Gate! (Somewhat)

Gaming is not going to be a strong suit of this tablet. There is at least one popular game pre-installed, Cut the Rope, but due to platform and hardware limitations, you might be limited in your selection to casual types (unless you get around the software installation block mentioned earlier). But if you’re of the old-school RPG bent, you might have some reprieve. The GemRB emulator, which is also available on Android, lets you play classic Infinity Engine games. A particular version of GemRB is in the App Store that is customized to run the first Baldur’s Gate game. You will still need the original game installed somewhere in order to copy the contents to the tablet. Sadly, you’ll have to store those files on the tablet itself which will eat up some of that precious 16 GB storage.

Ubuntu developers have created official file manager and document reader apps but strangely didn’t have them installed by default. Perhaps it’s an attempt to mimic iOS’ complete disregard for file managers or Android hiding the functionality. You will, however, quickly run into cases where you’ll need both. If you’re a seasoned Linux user, you’ll definitely want to install the Terminal app, another official but not pre-installed app. The Terminal is surprisingly usable even without a physical keyboard, which is a rarity among such apps.

9. Be prepared to scour the Internet for answers

While bq might have its own support avenues for the tablet, it won’t be enough. More than iOS or even Android, Ubuntu Touch is more community driven and community centric. That also applies to support questions and problems. The good news is that the Ubuntu community is large and thriving. For better or worse, it is the most searched for Linux distribution, so searching around the Internet isn’t going to be that hard. Finding the answers to problems, however, is a different story. Which brings us to the final item.

There was a time when operating systems were released as final products almost set in stone and never moving. But now even Microsoft has transitioned to a mindset of an ever-evolving OS with Windows 10. Linux has been doing that for years (save for some “long term support” releases) and Ubuntu Touch is no exception. Development happens in the open (more than Android in fact) and one can see the constant flow of fixes and new features. And the updates are rolled out quickly as well, as often as possible but also only when ready. That means that the bugs, especially the big ones, that you see today might be gone in a few months and new features will be there to excite you as well. Ubuntu Touch is less a final product and more a still growing, organic being.

Mobile devices, especially smartphones, are becoming more powerful every year and are practically taking over our computing lives. Instead of bemoaning the death of the desktop, Ubuntu Touch takes the bull by the horns and creates a convergence of both worlds in a single device. It is a future that many other companies and tech pundits have pointed to. We’re definitely not yet there, but the bq Aquaris M10 Ubuntu Touch is definitely a nice first step. 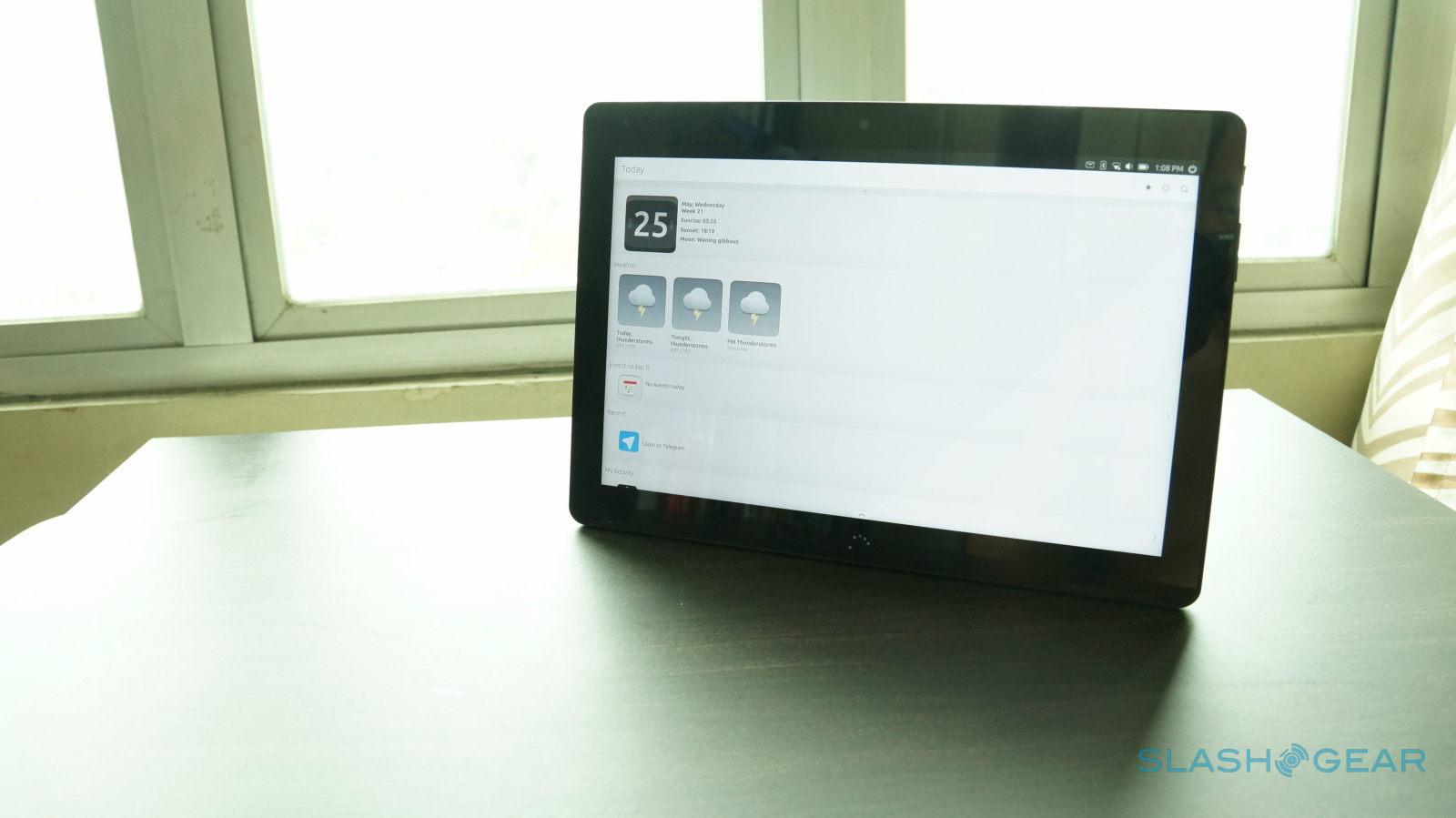