The folks at iFixit got their hands on one of the 300 Steam Machine consoles Valve has sent around, and as expected they cracked into its shell, finding out what lies beneath. They broke the console down in terms of components and priced all the parts at about $1300 USD, and from there it was a slow forray into the bowels of the next-generation gaming console.

The packing itself gets a notable amount of praise, with the console being shipped in a wood box with black hinges and cryptic stamps, as well as a latch to hold the lid on. Inside is the console and its intriguing controller, which does not contain typical gaming joysticks, instead offering flat pad-like circles. Also included in the packaged a USB recovery drive in the event an industrious developer managed to bork their system. 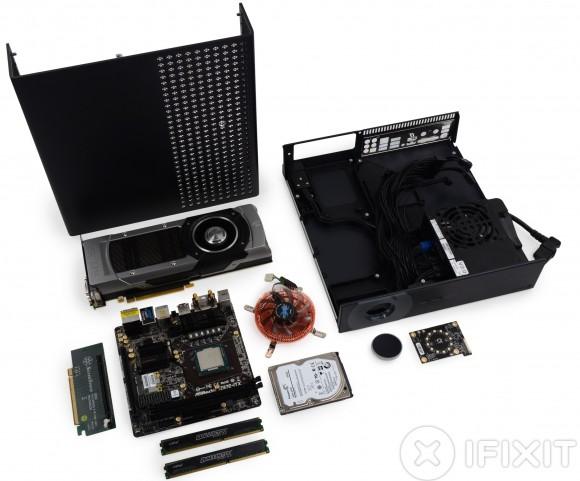 After cracking open the controller, the iFixit team moved on to the console itself, finding within an NVIDIA GeForce GTX, 16GB of RAM, a 1TB Seagate SSHD, and more. The processor was found to be a 3.2GHz Intel Core i5-4570 offering. As you can see by the ample pictures they have, the components are nicely placed and easily removed, with the interior appearing clean and origanized.

At the end of it all, the Steam Machine was given a repairability score of 9 out of 10, which is nearly as good as it gets. All one needs to get inside the console is a Phillips-head screwdriver, and things like the hard drive and video card can be easily upgraded. A bit of a point was dinged by the difficulty in removing the RAM, and the lack of a manual made cable routing hard, which took the rest of the point off its score.