Leave it to Captain Kirk to stir up trouble. Star Trek actor William Shatner took to Twitter today to complain about — well, Twitter. Their latest advertising move has ruffled some feathers, where the micro-blogging platform is essentially selling your friendship. By putting promoted accounts in your ‘Following’ list, Twitter is taking an interesting trip down a dark path. The first offender is MasterCard, where Shatner noticed they’d popped up in his Following list, though he didn’t follow them at all.

Worse is that a similar scenario is playing out elsewhere. Shatner points out ‘The Rock’ is only following one person, yet has MasterCard and Muhammad Ali’s official Twitter account listed as well.

Shatner also pointed out that placing accounts in your ‘Following’ list essentially suggests you endorse them. That’s likely not an issue for MasterCard or Ali unless you’re a big Visa/Joe Frazier supporter, but it’s a slippery slope. If Twitter is ready to sell you out to whoever pays them for ad space, the results could be damaging or embarrassing. 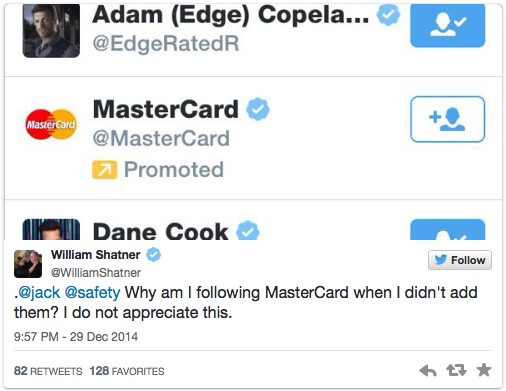 It’s pretty plain that you’ve not actually followed the account, since it’s only listed and not highlighted, but it’s easy to see where misunderstandings could happen. Still, it seems like Twitter was just using this method to push accounts for those times you do actually follow someone and other suggestions pop up.

This seems to mirror promoted ads, where MasterCard has been making the rounds of late. If you’re looking for a bit of humor in the situation, MasterCard even showed up in the Visa account under ‘Following’ because of all this.

Via: The Next Web