The HP Slate 500 and Enterprise Tablets

The debut of HP’s Slate 500 begs the question as to whether or not enterprise customers and market verticals care about Tablet computers. For those of us who have followed the industry for 10 or more years this product announcement feels like a re-run of a TV show we saw 6 years ago.  Pen based Tablet PC’s have come and gone and nearly all of them in the days of old focused on the enterprise.   Will Tablet / Slate PC’s fair better this time around? What type of operating system should they run? Can they compete with the iPad?  Let’s explore.

In 2004 when OQO brought their pocket sized UMPC to market it ran a full version of Windows XP due to enterprise customer feedback.   This feedback told them that enterprise customers who invested in proprietary software to run their business built the bulk of that software to run on Windows.   As attractive of an option it was to develop for things like Pocket PC or Palm OS the fact of the matter was the bulk of IT departments needed their enterprise software to run on Windows.   This need still exists today and what will wait to be seen is whether they develop apps that integrate with their enterprise software systems or invest in tablets running Windows.

A lot has changed since the Tablet PC’s of 2003-2006.   Mainly the unprecedented growth of touch screen based smart phones.  Prior to 2007 touching a screen device as the primary way to interact with it was no where near a fully mature experience.   Now that the finger has replaced the stylus it does seem demand is back within enterprise customers to deploy tablets.    We are talking with a number of businesses large and small who are experimenting with iPads and iPad software development.   From what Cisco has shown with the Cius and an enterprise approach with Android its clear enterprise tablets is an emerging trend that is still in its early stages. 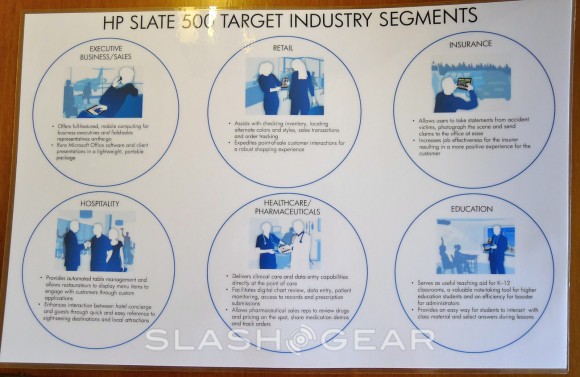 The operating system will play a critical role in the success of tablets in general but it is especially the case with enterprises.   From what we have seen on the market so far an embedded OS still outperforms Windows 7 slate devices.    Even though Microsoft has included a lot of touch based technology into Windows 7 it is still an operating system primarily designed for a keyboard and mouse.    This is why it will be interesting to see whether enterprise customers choose to support a thiner embedded OS, like iOS, CIUS Android or BlackBerry’s QNX, due to the hardware and software performance benefits, or if keeping a single consistent software image leads them down the Windows 7 Slate path.