According to research study by Displaymate Technologies, the display on the new Samsung GALAXY S 4 significantly trumps the display on the Galaxy S III, and matches the iPhone 5‘s Retina display. Screens from all three phones were put under the microscope anad compared with one another, comparing brightness, subpixels, and a number of other factors.

Dr. Ray Soneira, owner of Displaymate Technologies, says that the GALAXY S 4 1080p 5-inch display is beautiful, and it packs in almost as many subpixels as the iPhone 5, and with the Samsung device’s PenTile layout, there are twice as many green subpixels as there are red and blue. Light reflection is also said to be as good or even better than the iPhone 5.

The Galaxy S 4′s display also uses a lot less power than its predecessor. The Galaxy S III chews up around 0.83W of power, while the GALAXY S 4 only uses 0.70W. That doesn’t quite beat out the iPhone 5’s 0.66W, but it’s really close for sure. The successor to the GALAXY S 4 may surpass the iPhone 5 in this respect if the trend keeps up, especially since OLED technology is still in its early phases. 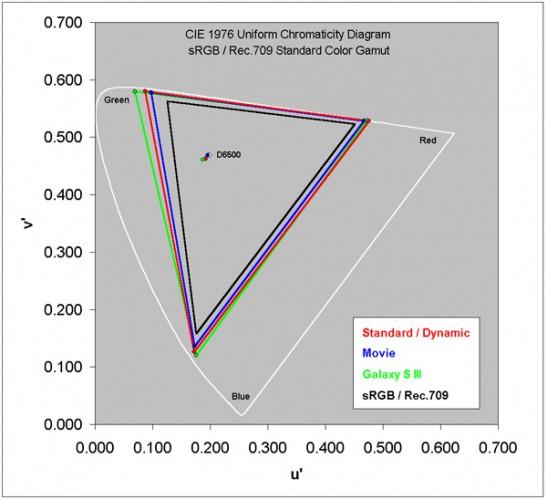