The creature you’re about to see lived on Earth about 508 million years ago, and today we get to see its head for the first time. We get to see its head in the right place for the first time, to be more precise. Before now, scientists had this lovely little beast upside-down and backwards. Not entirely unheard of when dealing with creatures that aren’t as simple to identify as birds or mammals of many types, this creature was displayed wrong. Now, 38 years after its discovery here in modern times, “Hallucigenia” can stand upright.

Below you’re going to see one of the several bits of ancient evidence these scientists and researchers had to work with. Can you imagine seeing something like this and taking on the subject, declaring to the world that you knew exactly what it was? 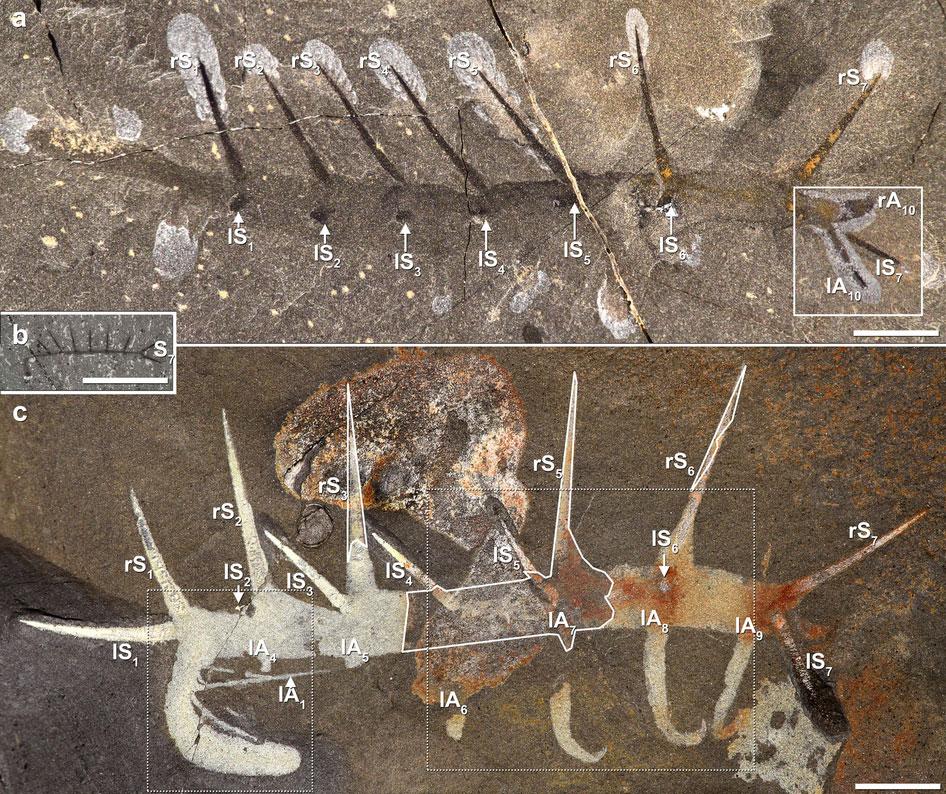 Next you’ll see what MIGHT be a bit more clear compared to the final product. This is the creature on its side – you’ll see the spines and the legs, if you do so strain your eyes at the right angles. 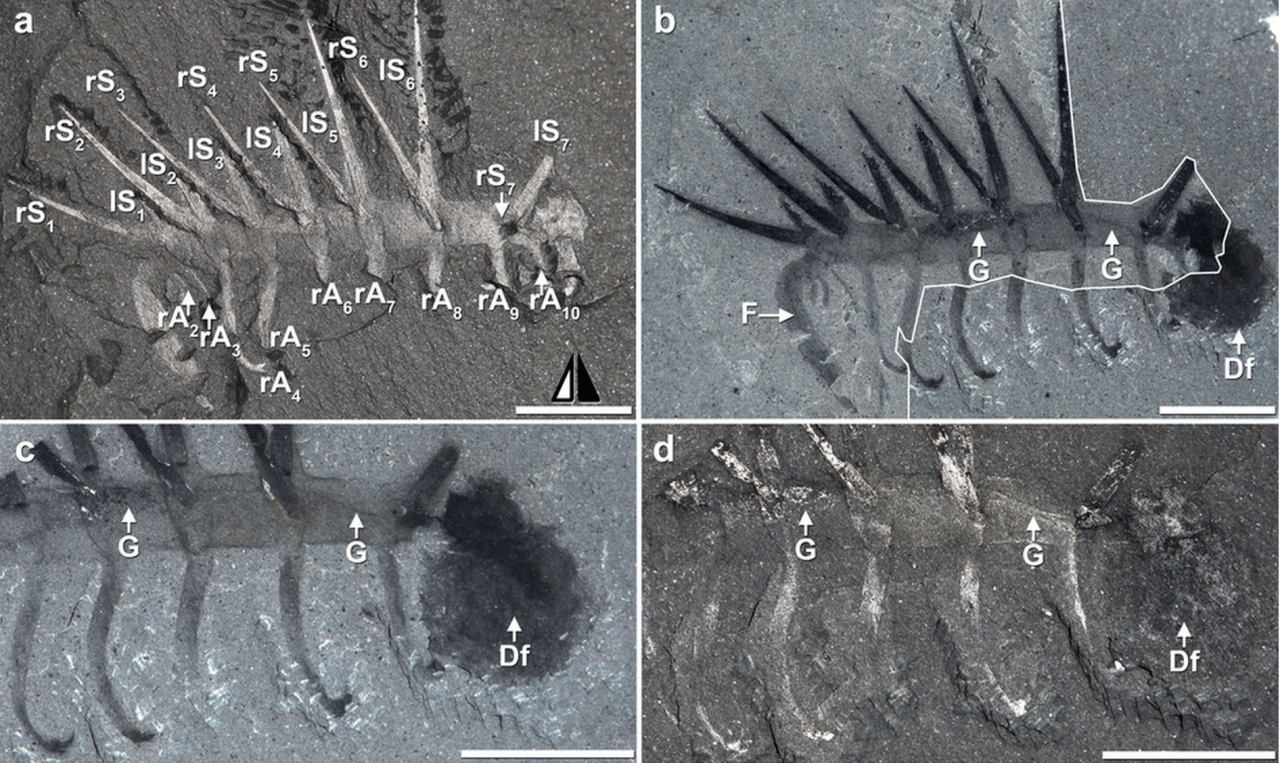 ABOVE: “NMNH 83935 (holotype): in contrast to body tissue, decay fluids lack a sharp margin and are non-reflective.”

The next image is a lateral profile of the creature. You can see how an early onlooker might think one end was the face – with pincers – while the other was the rear. Now we’re far more aware of the fact that it’s the other way around.

Now let’s have a peek at what Hallucigenia has been found to actually look like in a 3D recreation of it trotting along the ground. The video you’re about to see is a “reconstruction of Hallucigenia soft anatomy, showing a possible interpretation of walking style and trunk flexibility” – illustrated and rendered by Lars Fields.

What a cute little fellow!

The illustration you see at the head of this article is also shown here in full. It’s drawn with data from this study by illustrator Danielle Dufault. 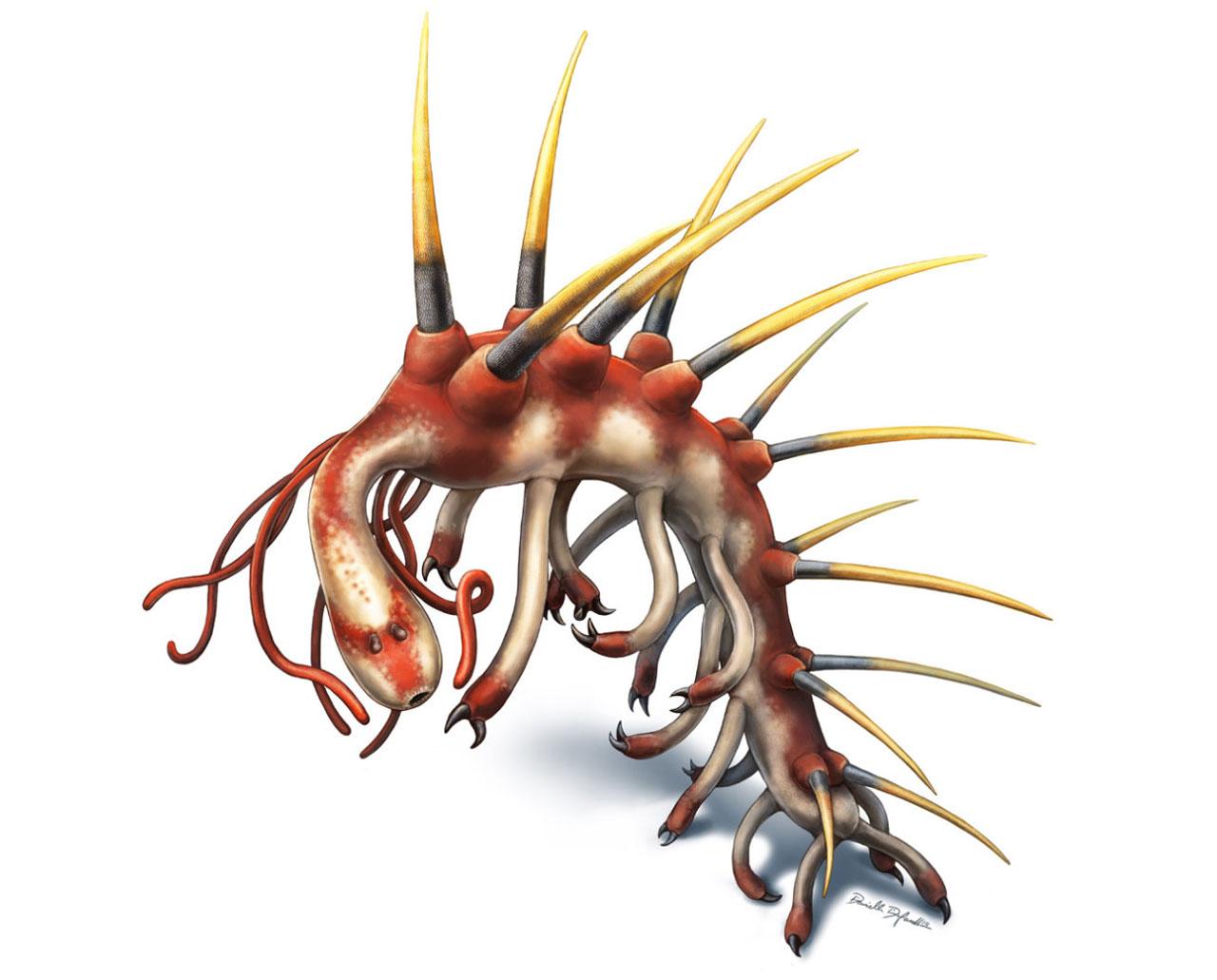 The next chart shows interpretations of Hallucigenia through time. Back in 1911, it was assumed that the spines were lateral. Next they were ventral, then in 1991 – and forward – they were dorsal. Kind of like a stegosaurus through time, yes?

It’s as if each different set of scientists decided they saw something ever-so-slightly different. As tools for analyzation evolved, so did our perception of this ancient animal.

You can learn more about this animal in the paper “Hallucigenia’s head and the pharyngeal armature of early ecdysozoans.” This piece of work is authored by Martin R. Smith and Jean-Bernard Caron and can be found in the scientific journal Nature under code doi:10.1038/nature14573.