We were only just talking about Sony Ericsson’s Android tablet plans, and now shots of what could be the company’s 4G prototype have emerged from deep in the TDIA MWC 2011 booth. NieuweMobiel spotted the slate – branded with the TD-LTE 4G used by China Mobile, the carrier which Sony Ericsson has already said it is working with – complete with a front-facing 3.0-megapixel webcam and what’s estimated to be a 6 to 7-inch touchscreen.

Full specifications are unknown, but TDIA did confirm that the slate runs – or will run; it’s not clear if it’s a functional unit or not, and was shown turned off – an unspecified version of Android. TD-LTE is also being trialled in Germany, so this might not be solely a device for the Chinese market.

In fact, the Sony Ericsson slate may not be released at all; it could well only be a test device. That’s probably not a bad thing, given the bulky casing and the fact it apparently has a resistive touchscreen. 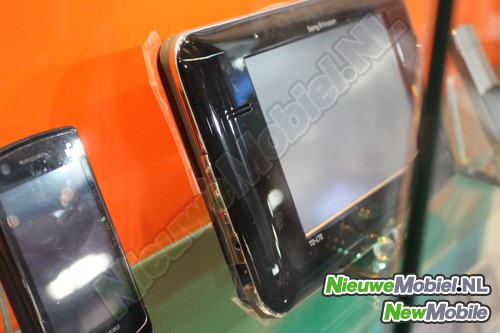