Many consumers try to soften the blow by trading in their old, faithful companion but not all trade-in offers, even those from Apple, really give consumers what their phones are worth. Trade-in site SellCell.com, in contrast, promises you’ll be better prepared for when the iPhone 12 lands if you sell your old iPhone to them instead.

Consumers will often flock to Apple and their carriers first when trying to trade-in their iPhones. After all, in the hierarchy of organizations, more consumers will immediately place trust in the iPhone maker and their service providers. When it comes to actually giving customers value for their old phones, however, the numbers tell a different story.

To be fair, Apple does offer some sweet deals in exchange for a “Used Device” in “Good” condition, especially if you didn’t get yours from a carrier. Its prices, however, are not always the best, especially after Apple makes trade-in value cuts across the board just like it did in July. 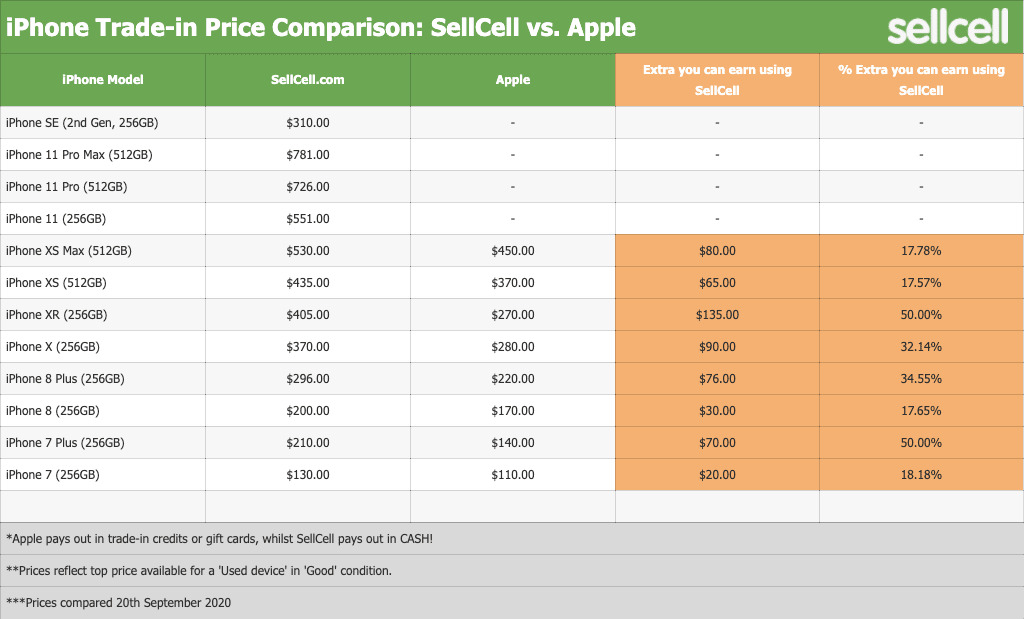 Also notice that you can’t trade in last year’s iPhone models just yet nor could you trade in this year’s second-gen iPhone SE. Apple will most likely flip the switch when the iPhone 12 comes around but that could be too late for those who want to be ready when Apple launches it.

Things get worse and messier when you try to look into the trade-in prices of the four largest carriers in the US. They all offer different prices, except for Sprint and T-Mobile as the two have now become one. Even the carrier with the best prices, which, curiously, is Verizon, isn’t able to match what SellCell has to offer.

Last year’s iPhone 11 Pro models have a trade-in value that’s almost $200 more on SellCell, around 30-32% higher than what Verizon will give you. The price difference is even more evident with the oldest iPhone model available for trade-in, the iPhone 7 series from 2016. The iPhone 7 Plus is valued only at $141 on Verizon but can be traded in for $210 on SellCell, an almost 50% difference. 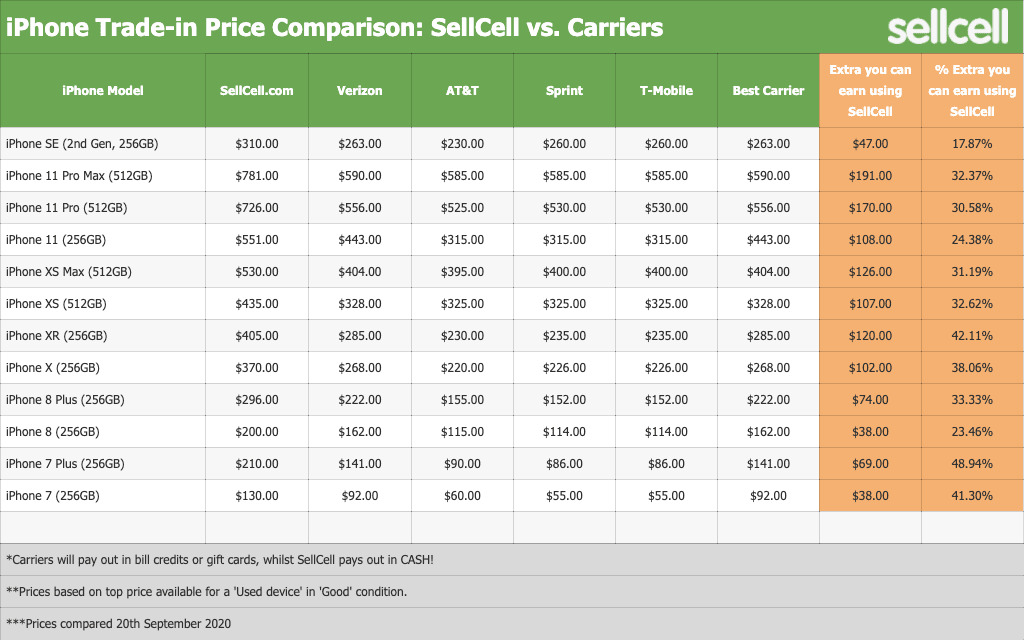 If the price advantage isn’t enough, SellCell also has other perks to make it clear that it’s placing a lot of value in what consumers are bringing to its virtual doors. When you trade-in your iPhone with carriers or Apple, you only get credits or gift cards towards a different purchase. SellCell, in contrast, actually gives you hard cash, giving consumers the freedom to spend it the way they see fit.

SellCell also has a “Like New” category that tries to offer even better prices for devices that may have been barely used. Apple and carriers only have a “Good” as its highest tier, which was what the trade-in site compared its own “Good condition” prices with. In short, actual values for an iPhone could be even higher on SellCell depending on its state.

Apple and network operators are in the business of selling you products and subscriptions, so the more they get you to pay, the better. SellCell, on the other hand, is in the business of helping consumers get the best prices for the phones they’re trying to sell. And when you’re parting ways with an old friend, the last thing you want is to feel shortchanged for a device you handled with great care, even if for less than a year.