While we were over at the GCF scoping out the Palm Pre Plus and Pixi Plus, we also noticed a new listing for a Samsung handset, the GT-S8500.  Better known as the Samsung Wave S8500, the Bada based smartphone-for-the-masses has been approved by the GCF with 900/2100MHz UMTS/HSDPA.

Video demo of the Wave S8500 after the cut 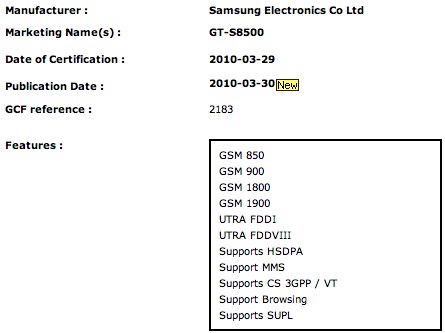 Samsung haven’t yet confirmed an official release date for the handset, which uses their own home-grown OS, but previous speculation has pegged it for a Q2 2010 arrival.  It’s now looking possible that the release could be sooner in the quarter than that, however; retailer Carphone Warehouse have it listed for April 2010, which would certainly fit in with this new certification.

For more on the Wave S8500, check out our hands-on video below and our first-impressions from MWC 2010 last month.