Look, Nintendo, we don’t like to beg, but if you don’t greenlight production of this transparent 3DS XL we might just have to reconsider our geeky pride. Revealed as part of a new Nintendo walk-though of the 3DS XL (or LL as it’s known in Japan), the transparent console is sadly more for demonstration purposes than anything else, being used to show off some of the company’s design decisions and explain what many have deemed – such as the absence of a second circle pad – unacceptable.

If anything, the clear casing shows just how much is packed into the 3DS XL’s chassis, even enlarged to accommodate the bigger displays. Those larger panels were a tricky balancing act, Nintendo’s design team says: larger screens don’t just take up more space, but require more backlighting, and that sucks down battery power more quickly too.

However, as well as preserving some realistic usage times, the 3DS XL also finesses the glasses-free 3D effect. Nintendo says the parallax system has been refined, along with defending the use of the same resolution screen, despite the enlargement: more pixels would only have increased eye-strain and reduced the amount of time users could actually play, they reckon.

Paint finishes were also tricky to complete, requiring no small number of conferences with the production partners, but we’re more pleased to hear that screen reflections have been cut down. The original 3DS came in at around 12-percent reflectance, whereas the new 3DS XL trims that to 3-percent. 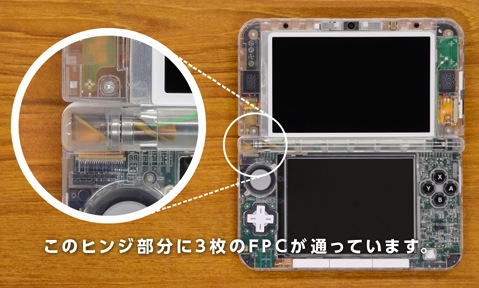