NOOK Tablet hands-on roundup from around the web

At an event that was very clearly aimed directly at the Kindle Fire this week, Barnes & Noble revealed their next-generation NOOK, named the NOOK Tablet and looking just as lovely as the original NOOK Color. So similar, in fact, that it’s essentially the same design save the innards which are twice as powerful and the TINY change in chassis that makes it ever so slightly lighter and thinner. Below have a look at some hands-on accounts with the device from around the web.

David Carnoy of CNet has for the most part seen no distinct advantage in the NOOK Tablet over the Kindle Fire, the device’s primary opponent, in anything other than the storage, which he speaks about thusly:

Storage: This is a big one. Even before I lay a finger on the Kindle Fire, its 8GB, non-expandable storage capacity gave me pause. (Of that 8GB, only 6GB is user accessible.) By doubling to 16GB out of the gate–and offering the ability to add up to 32GB additional storage via microSD–the Nook Tablet makes me less anxious about storing all of the books, magazines, apps, music, and videos I expect to need, without needing to worry about being within range of a Wi-Fi hotspot for real-time streaming from the cloud (as Amazon emphasizes on its product). Advantage: Nook Color (The Kindle’s 8GB of space feels awfully thin compared to the Nook’s spacious–and expandable–16GB.) 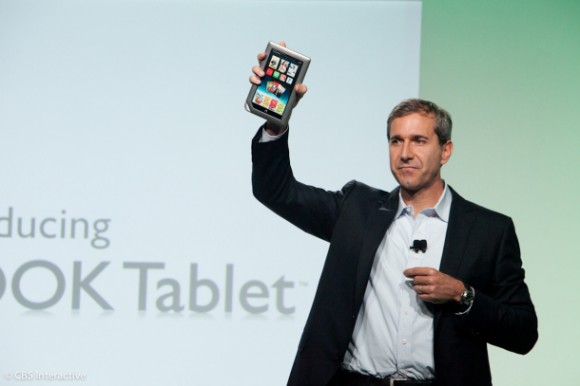 Joanna Stern of The Verge took note of the operating system similarities to the NOOK Color and gave some interesting insight on the Netflix integration:

In terms of the OS, not much has really changed on the interface front. You still have the bookshelf layout (yes, similar to the Kindle Fire) with apps and a carousel of books on the bottom. Double-tapping on the Nook hardware button on the front takes you to another list of core-apps, including the Browser and Settings. We went back to try and get some time with Netflix only to be unfortunately blocked in our efforts — the rep we spoke with wouldn’t even open the app for us, citing bad wi-fi connection that would give a subpar impression. She repeatedly assured us that the Netflix UI was optimal (though wouldn’t say if it was the same as the general Android app) and that both companies worked together to integrate into the device strongly (i.e. recommendations). 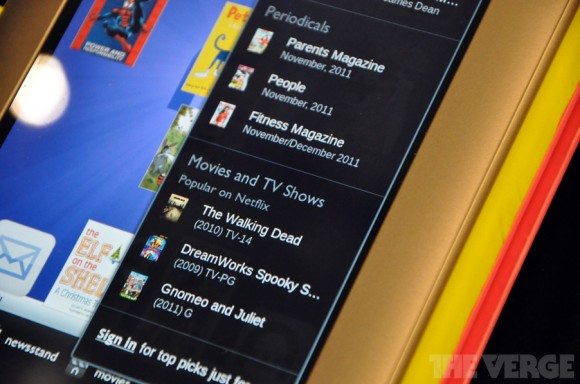 Brian Heater of Engadget notes how the NOOK Tablet appears so similar to the NOOK Color that it’d be difficult to tell them apart in a lineup, also mentioning how they’re not quite ready for a true hands-on experience quite yet:

The new Nook Tablet certainly isn’t all that new from an aesthetic standpoint, compared with the Nook Color. Walking into a store blind, it would be awfully tough to distinguish the devices — though the Tablet is bit lighter, color wise. What separates Barnes & Noble’s two higher end readers is largely internal. Unfortunately, the products being show off at today’s event weren’t quite ready for prime time. … Unfortunately, we’re going to have to spend a bit more time with a final version of the product before we feel comfortable recommending the Tablet, given its $50 premium over both the Nook Color and the Kindle Fire. 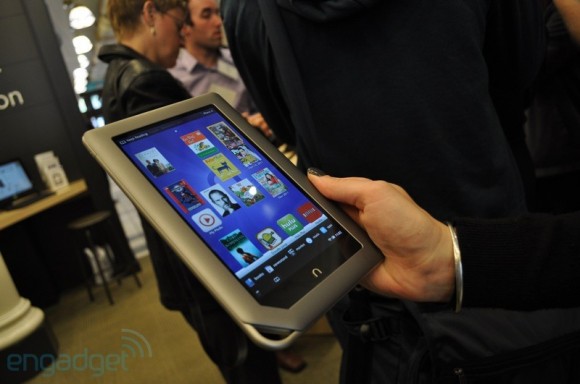 Steve Kovach of the Business Insider notes a couple of items including Marvel Comics and Netflix integration, noting here that the OS has been improved over the original NOOK Color:

Barnes & Noble partnered with Marvel Comics to bring graphic novels to the new Nook Tablet. You can swipe through each comic panel or zoom in on each one individually. … The Nook also integrates with Netflix. This notification center lets you know which movies are in your queue and recommends new ones to watch. … Here’s the new home screen. It looks a lot better than the old OS, giving you access to your favorite apps and publications. 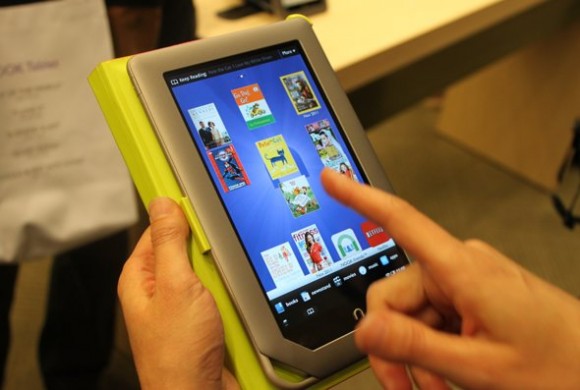 So we’ll have to wait for a more final-hardware version of the device to get a real perfect impression of what we’re dealing with, is what’s to be taken away from this situation. That and Netflix has hits claws firmly implanted in the NOOK Tablet’s guts. Also note: images in this post are either from Barnes & Noble or were photographed by the publications they appear below.