Smartphones and tablets these days, especially the high-end ones, are almost capable of doing anything our computers can, save for a few quirks of the OS and apps they run. But their real limitation isn’t exactly the software but the form they come in. Smartphones are great to use on one hand but are terrible with larger content and input. Tablets have a bigger screen space but keyboard input leaves a lot to be desired. Accessories that address these do exist, but in separate pieces. Enter NexDock, practically a portable display attached to a keyboard masquerading and acting as a laptop, with your smartphone or tablet as the brain.

Although not the first ones, Microsoft‘s Continuum and Ubuntu‘s Convergence have definitely sparked, or even reignited, the imagination of many. The idea of using your poweful smartphone as the heart and brains of a PC experience definitely has some appeal, but even the Continuum falls slightly short when it comes mobility. You will need a bigger display, keyboard, and mouse to make it happen, but those three might not always be at hand on the go, especially not separately.

NexDock combines all three into one, laptop-like setup. It is primarily an external 14-inch display with HDMI input slapped together with a laptop-sized keyboard and touchpad, powered by its own 10,000 mAh battery pack inside. It was primarily designed to be a portable setup for the Lumia 950 and 950 XL, taking Continuum wherever you go. However, it isn’t limited to that at all.

It can be an always on the go display for an HDMI PC stick like those from Intel or Lenovo. It can serve as the display for a Chromecast or Miracast, opening it up even to Android devices that don’t have video out capabilities. It can even become a second monitor for a laptop, though that one is a bit of a stretch. With its own large battery, it can power many of these devices (except the laptop). Whether it can serve as a phone or tablet charger as well isn’t explicitly stated.

While the idea has merit, the actual implementation might dismay some. That large 14.1-inch screen has a barely passable 1366×768 resolution and uses TN panel technology. It also weight about 1.49 kg and is 20 mm thick, making it just as thick and heavy as a laptop but without any of the benefits of an actual laptop. Given that this is pretty much a $99 to $149 working prototype of an idea, that might be forgivable on the first try, but not if NexDock is meant to be a commercial product.

The biggest hitch for those who are enamored by the idea is that it isn’t even a finished product at all. They are currently on Indeigogo looking for $300,000 in (fixed) funding. So far, they haven’t even reached a q uarter of that but they still have a month to go. In fact, the 250 early bird slots, each costing $79, are all gone already. Pre-order shipping is scheduled for June this year. 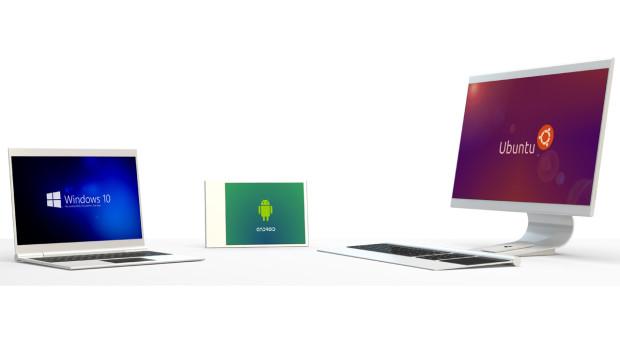 Continuum and Convergence might indeed be pointing at a bold new direction for personal computing, and NexDock might have stumbled on a bright idea on how to help push that forward and maybe even profit from it. But they always say that idea is cheap and NexDock’s execution will be what will set it apart from dreamers.