NASA is another step closer to blasting off its experimental “green” spacecraft, which switches traditional (and toxic) propellants with a safer, more efficient alternative that looks like peach tea. The Green Propellant Infusion Mission (GPIM) is expected to launch in 2016 as part of a SpaceX Falcon flight, beginning a year-long experiment into whether greener fuels could revolutionize exploration of the solar system.

The GPIM fuel itself is a Hydroxyl Ammonium Nitrate fuel/oxidizer mix, known also as AF-M315E. While it’s less toxic than the traditionally used hydrazine fuel NASA currently relies upon, it also performs better.

The craft itself will use two different types of thrusters, a 22-newton thruster and four 1-newton versions. Combined, they can not only control orbit changes but go into pointing/holding tests. 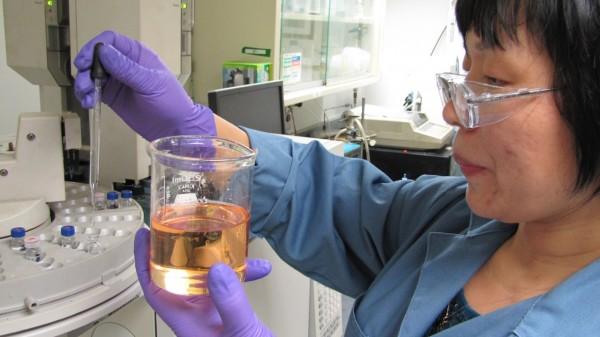 GPIM fuel mixes with a new type of long-lasting catalyst, and then decomposes exothermically. That process then produces gases which are pushed out of the engine nozzle, thus creating thrust.

Advances both in the fuel and the catalyst have been required in order to make the GPIM project feasible.

Assuming it all works out, NASA won’t be the only organization to benefit. The Space Technology Mission Directorate (STMD) plans to offer it effectively “off the shelf” to other governmental agencies as an alternative high-power fuel type.