McLaren Elva is a $1.69m extreme roadster – the windshield is optional

In McLaren’s world, a windshield only gets in the way between you, the open road, and 804 horsepower: how else could you explain the new McLaren Elva roadster? A new addition to the British automaker’s Ultimate Series, the Elva strips off the roof and doesn’t stop there, paring back the bodywork to make the lightest road car ever from the company.

Dropping a windshield alone ins’t enough for that, of course. McLaren has used a bespoke carbon fiber chassis, doing away the roof, the front glass, and the side windows. The nose is dramatically low, combined with bulging front fender peaks that McLaren says don’t just look great but help with forward vision, too. 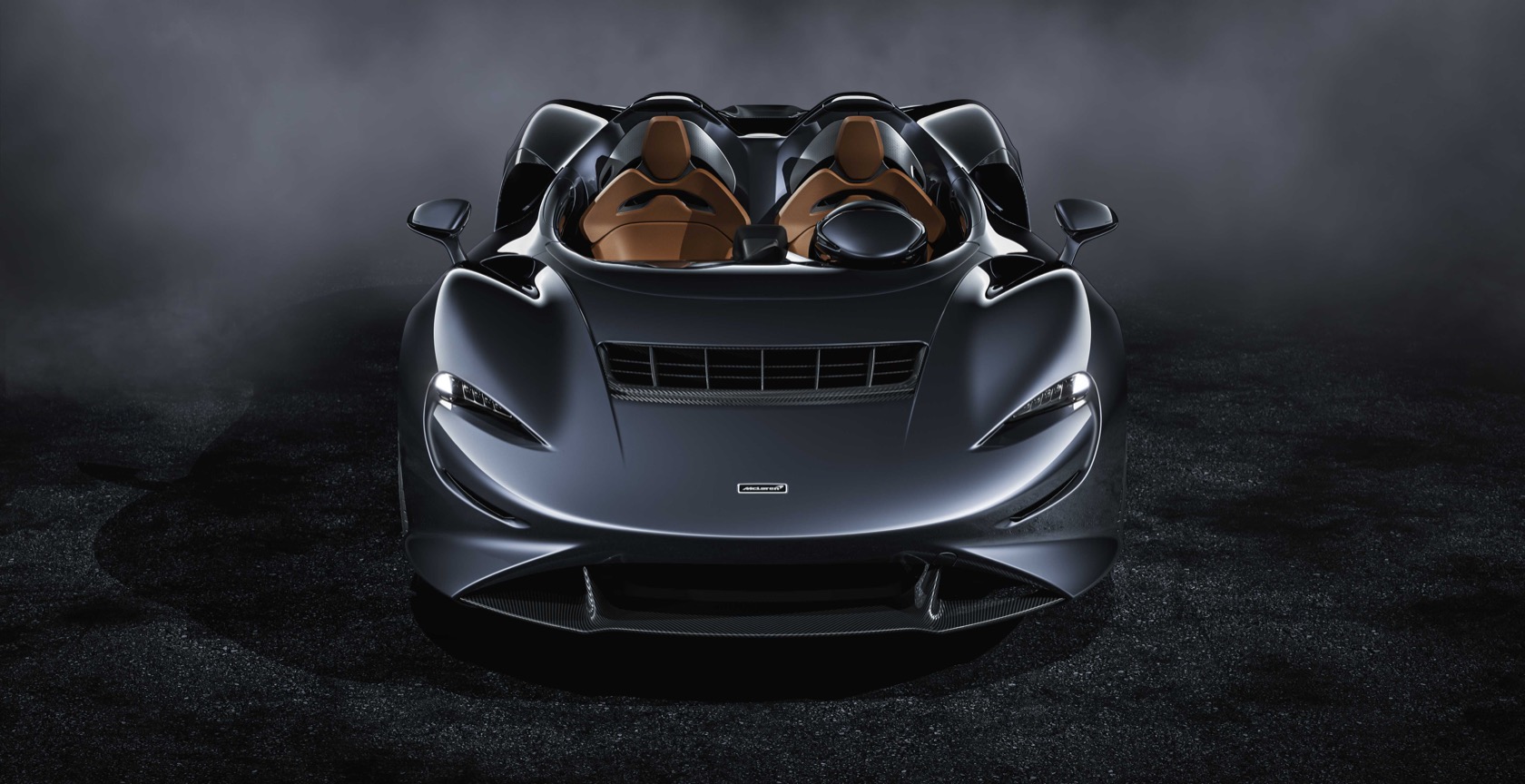 More carbon fiber appears for the rear fenders, which flow from the front of the door back to the rear deck. A deployable roll-over protection system helps keep the twin rear buttresses low, and McLaren says that, while helmets can be worn, they’re actually optional. That’s because “the form and sculpture of the upper cabin wraps around the driver and passenger to provide a secure environment,” the automaker claims, though it will offer a fixed windshield in most markets as a factory option. 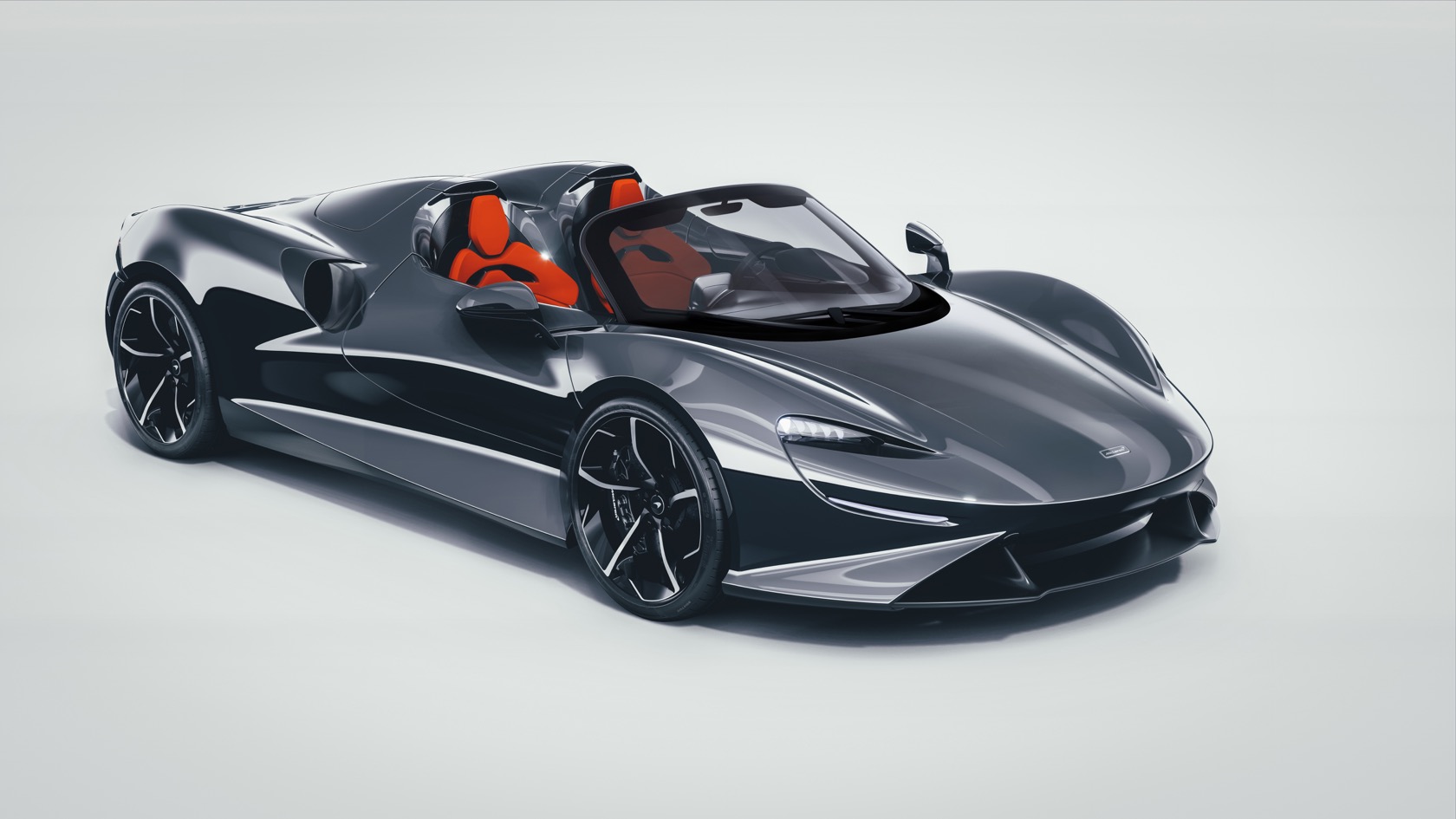 Take a test-drive first, though, if you can, because the engineers may have done enough to avoid that sensation-blocking front glass. Dubbed the Active Air Management System (AAMS), it channels air through the Elva’s nose and then funnels it out of the front clamshell at high velocity; it then flows over the top of the cockpit. The result is a “bubble” of calm, McLaren says, though it concedes that’s a “relative” measure.

Using a carbon fiber deflector that can power up by 5.9-inches, into the freestream of air, McLaren can turn AAMS on and off depending on when it’s required. Urban driving, for example, doesn’t need it, but AAMS will automatically deploy when the speed rises. Alternatively, it can be controlled manually. 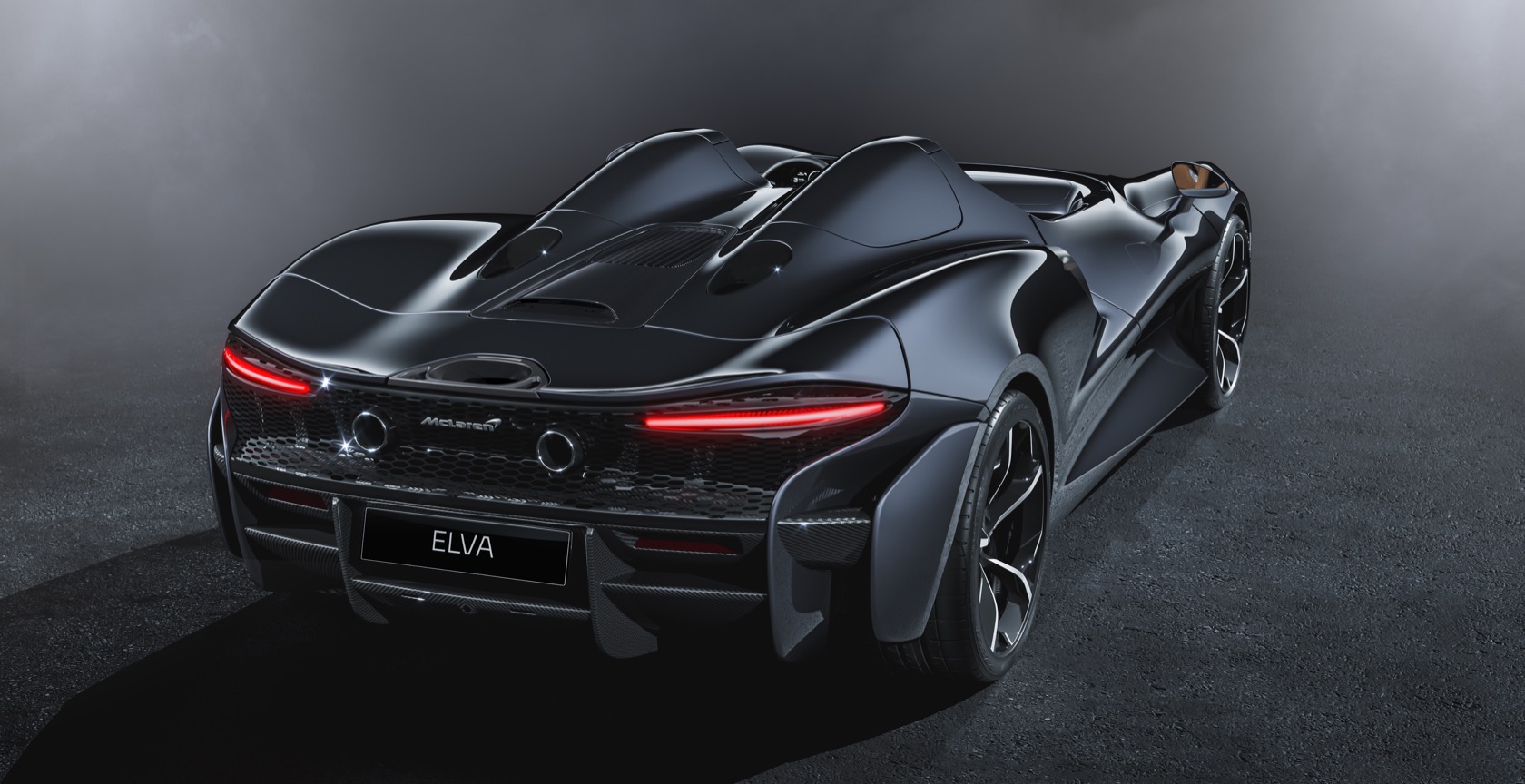 For power, it’s a 4.0-liter twin-turbocharged V8 with 804 hp and 590 lb-ft of torque. McLaren pairs it with a seven-speed seamless-shift transmission, and squirts all that power to the rear wheels. 0-62 mph comes in under three seconds, and McLaren says the Elva is actually faster to 124 than the Senna, at 6.7 seconds. 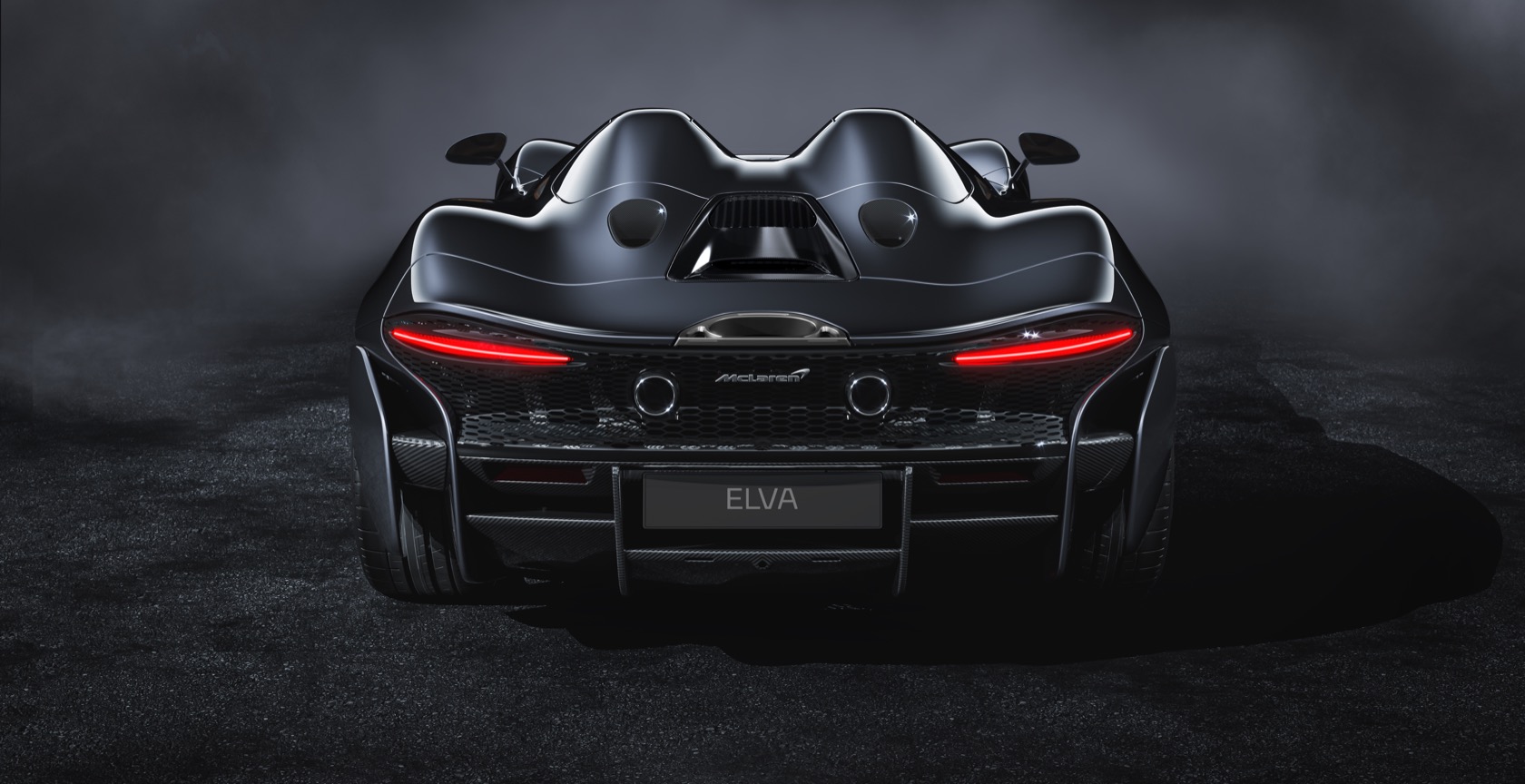 As for slowing, there are 390 mm sintered carbon ceramic disks, titanium caliper pistons; it’s a similar system to that of the Senna, but made lighter and more efficient. The twin tailpipes emerge from the upper engine cover, with 3D printed titanium finishers. 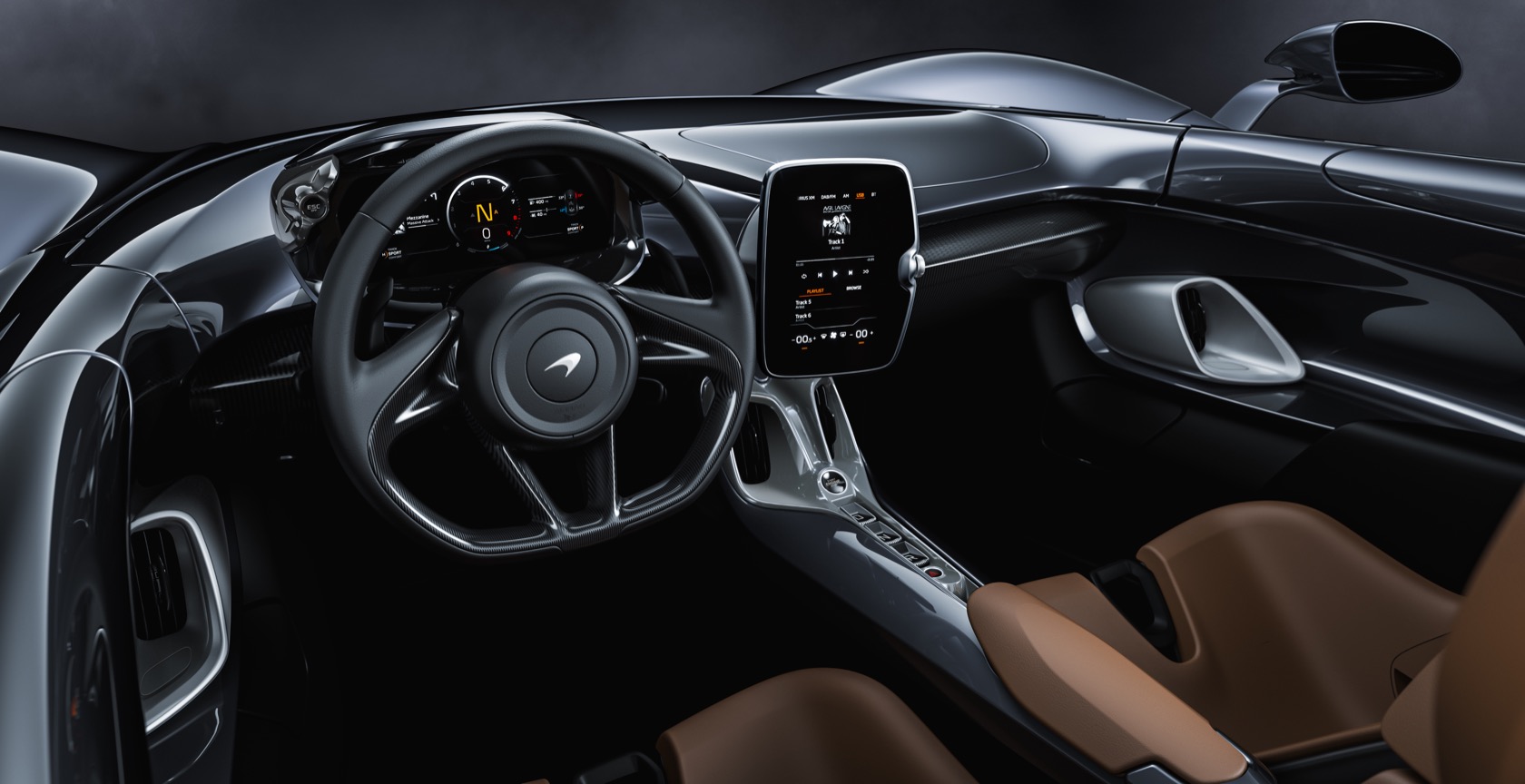 The carbon fiber body means huge, single-piece parts could be used, minimizing panel joins and gaps. Dihedral doors with a single hinge design are used, since this is a McLaren and they’re expected at this point, exposing a minimalist cockpit. The floor is exposed carbon fiber, while the automaker has used non-slip material to make it a little less slippery. 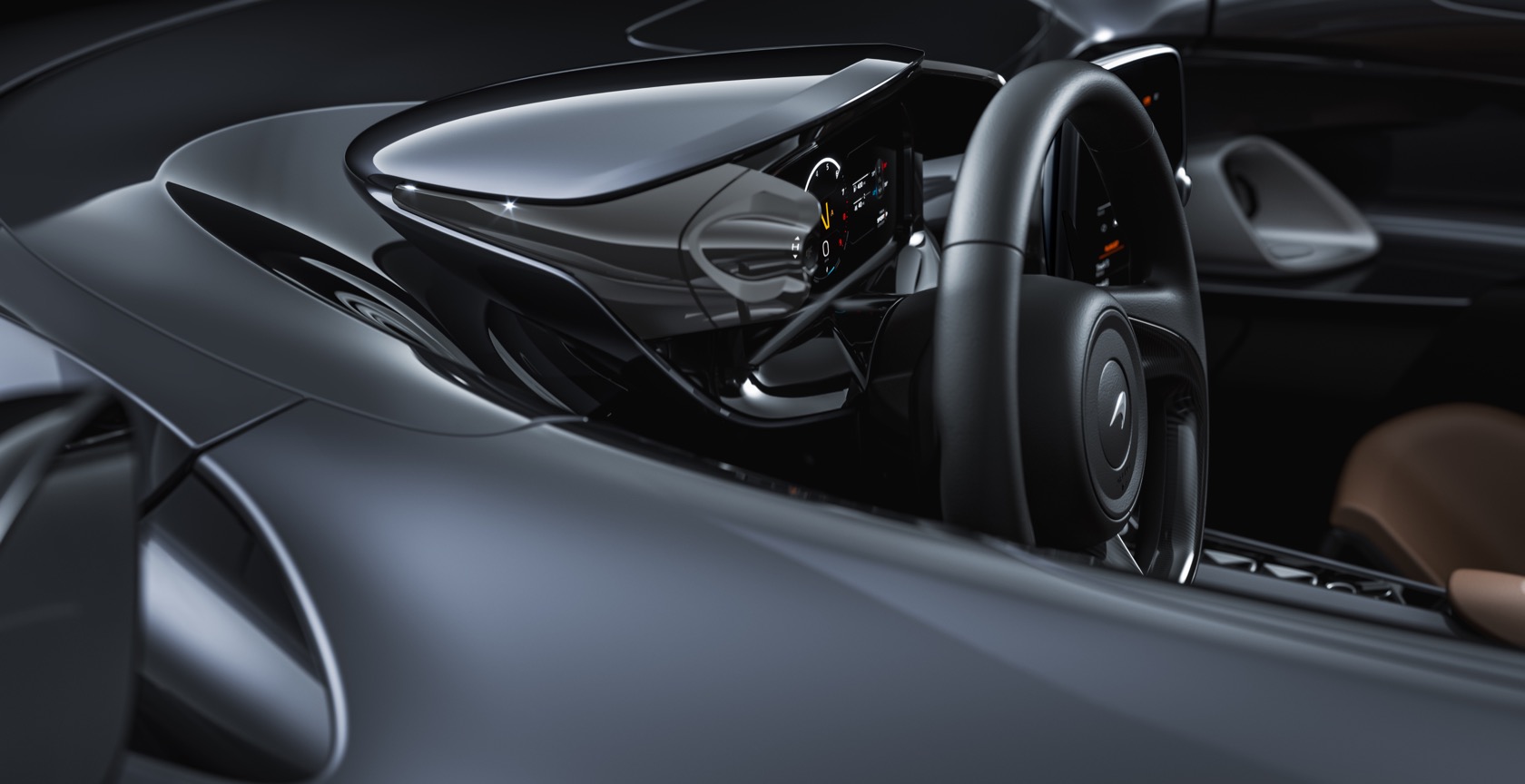 Bespoke seats get a carbon fiber shell, with shorter seat bases so that occupants can optionally stand up inside to enter or leave the car. Six-point race harnesses are an option. The Active Dynamics functions are integrated into the instrument cluster, so that they can be more readily reached from the steering wheel. A central 8-inch touchscreen – mounted on a lightweight carbon fiber arm – has edgeless glass and a side-month control dial. It also gets a new UI. 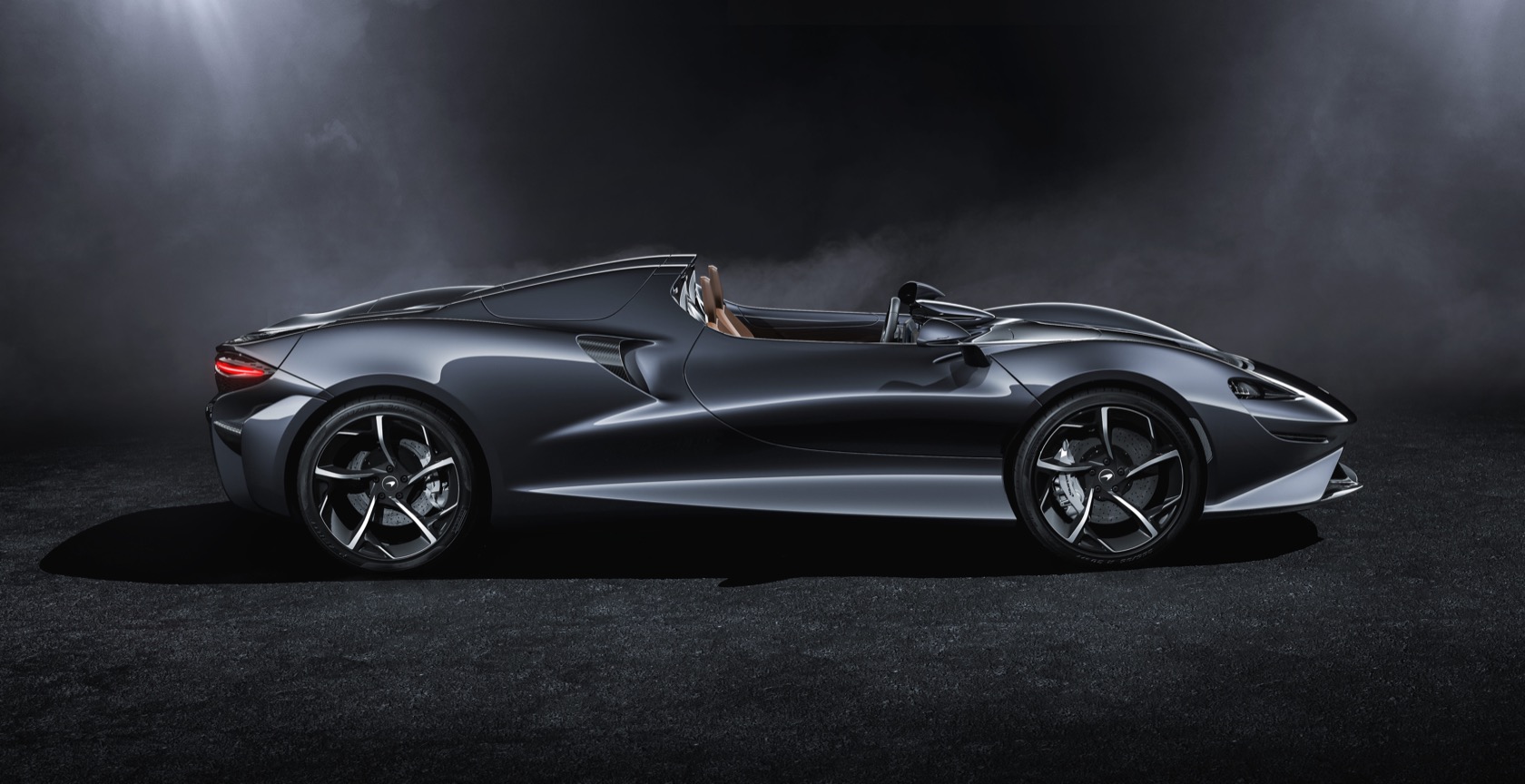 For storage, lift the rear tonneau and there’s a nook for helmets. Various different leathers will be optional for the cabin, along with a new Ultrafabric synthetic which debuts on the Elva. It promises more grip during high performance driving. There’s no audio system as standard, though McLaren will fit one as a no-cost option. Various exterior paint finishes are offered, or it can be left with a Gloss Visual Carbon Fiber Body option that tints the material but leaves it exposed.