The Lenovo ThinkPad tablet, one of the first two Android slates from the company, has just passed through the FCC, signaling that it’s on track for a late August launch. Unlike the consumer-oriented IdeaPad K1, which we reviewed earlier, the ThinkPad tablet is targeted at enterprise.

The FCC filing includes a line drawing of the ThinkPad’s backside, but reveals nothing about the tablet that we don’t already know. We’ve seen plenty of leaked press shots previously that show both the front and back sides of the tablet in great detail. Plus, we’ve also gotten our hands-on videos demonstrating the tablets unique interface.

The ThinkPad tablet will be sporting an NVIDIA Tegra 2 dual-core processor, 1GB of RAM, dual cameras, and plenty of ports including micro-USB and HDMI. An optional digitizer pen for the capacitive touchscreen will also be available, but at an additional cost. The tablet is priced from $499 for the 16GB model and from $529 for the 16GB model plus the stylus. 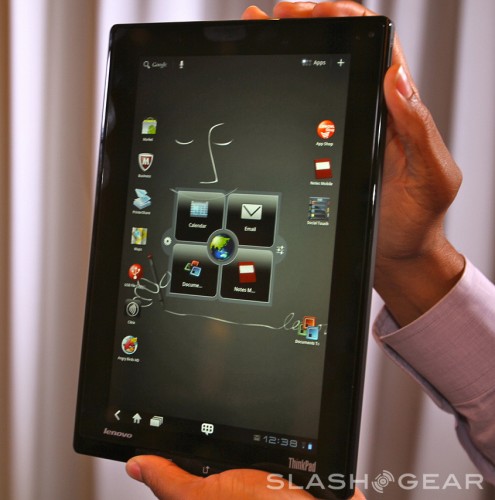