JVC have outed their latest camcorder, with the new Everio GZ-HM340 expected to arrive later in January for $499.95.  Packing both 16GB of onboard storage and an SD/SDHC card slot, the HM340 has a 20x optical zoom, 1/5.8-inch 1.37-megapixel CMOS sensor and a new image stabilizing system.

There’s also a time lapse recording mode – with options ranging from every second to every 80 seconds – together with auto-record, which only begins shooting when movement is detected.  In addition there’s face detection and a connected preview system – Face Flow Thumbnail – which splits clip timelines up by the individuals featuring in each.

Recordings begun on one media type can be seamlessly continued onto the other, and JVC throw in a copy of their easy-upload app for Windows which promises to make sharing clips on YouTube more straightforward. 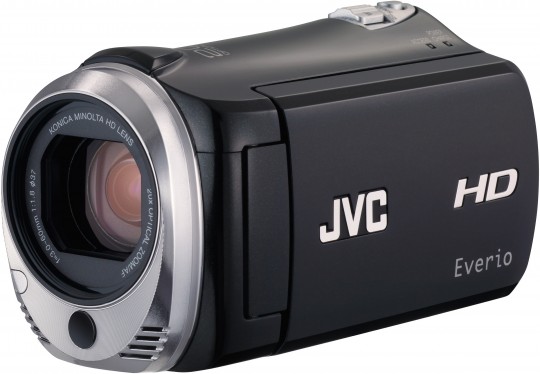 The GZ-HM340 includes all of the new features and improvements found throughout the 2010 Everio line, including advancements in low light capabilities and image stabilization, while convenience is enhanced with a new auto recording feature and time lapse recording.

For a steadier picture, JVC this year introduced Advanced Image Stabilizer (A.I.S) that ensures steady images even while walking, and is especially effective when shooting bright scenes from full wide to 5x zoom. Available on all models, Advanced Image Stabilizer uses a wide-angle image sampling area that is four times larger than that of conventional systems. A.I.S delivers powerful compensation for camera shake.

Time-Lapse recording is a sophisticated but easy-to-use feature for time-lapse shooting in one- to 80-second intervals, enabling hours-long segments to be reduced to seconds, such as the continuous recording of changing sky patterns spanning an entire day.

Auto record, a new feature, automatically initiates recording when a person or other moving subject enters the picture and the luminance changes, a great convenience for home surveillance, monitoring a baby, recording wildlife, taking group shots (instead of using a self-timer) and more.

Digital files created with the new Everio cameras can be easily shared in a variety of popular formats with the enhanced Everio MediaBrowser software for Windows®, which now provides automatic conversion of HD and SD videos for immediate sharing on YouTube™, including both down-conversion and up-conversion. Files can also be directly exported to iTunes® and synced with an iPod® or iPhone®, or burned to DVD, all with just a few mouse clicks using the Everio MediaBrowser application.

Like all 2010 HD Everio cameras, the new GZ-HM340 features a KONICA MINOLTA HD LENS, currently one of the world’s smallest and slimmest HD lenses. In the GZ-HM340 it offers a 20x optical zoom.

The 2010 Everio series features an all new, slim design that’s fashionable, easy to carry and comfortable to hold. Portability has been further enhanced with a redesigned grip belt that now works in two handy ways, as a conventional handle-style grip when both ends are snapped in place or as a strap when one end of the belt is released.

About JVC U.S.A.
JVC U.S.A., headquartered in Wayne, New Jersey, is a division of JVC Americas Corp., a wholly-owned subsidiary of Victor Company of Japan Ltd. JVC distributes a complete line of video and audio equipment for the consumer and professional markets. For further product information, visit JVC’s Web site at http://www.jvc.com or call 1-800-526-5308.