Japanese iPhone buyer lines up a week before release, others brave typhoon

Japan is probably known for people who are extremely passionate about certain things, including gadgets, and this scenario probably reinforces the point. A 44-year old man has set up camp in front of the Apple store in Tokyo’s Ginza district to earn the distinction of being the first to own one of the newly unveiled iPhone smartphones.

Tetsuya Tamura fell in line just after the iPhone 5c and iPhone 5s were unveiled last September 10, and he has stayed in there ever since and has no intention of giving up his precious spot. Some, even fans of Apple across the world, might question his sanity, but he has gained plenty of support and followers as he live-tweets his experience. And he’s still there today, enjoying this temporary period of fame.

Apple’s announcement of the new smartphones has been met with mixed reception. The iPhone 5c, which is marketed as the cheaper of the two devices, is built with a polycarbonate plastic shell that did not sit well with many. The iPhone 5s, on the other, is what was expected of an Apple premium device, even sporting a new fingerprint sensor on its home button. Despite varied reviews and opinions, sales of both the iPhone 5s and the iPhone 5c are expected to perform just as well as any other iPhone.

Tamura might be the first in line, but he is hardly the only one. Other prospective buyers have also set camp outside the Apple store, staying despite the heavy rains and high winds brought by a typhoon that struck the district yesterday. Fortunately, the Apple store employees let the people inside the store from 7:30 AM until it opened at 10 AM. 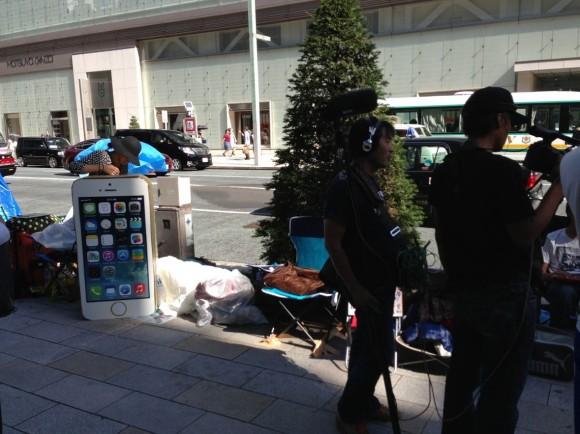 Although Apple and US carriers have started accepting online pre-orders for the iPhone 5c, a number of stores worldwide are expected to only start selling the devices on September 20. With a few days still ahead, we can only wish these campers the best of luck and a better weather.